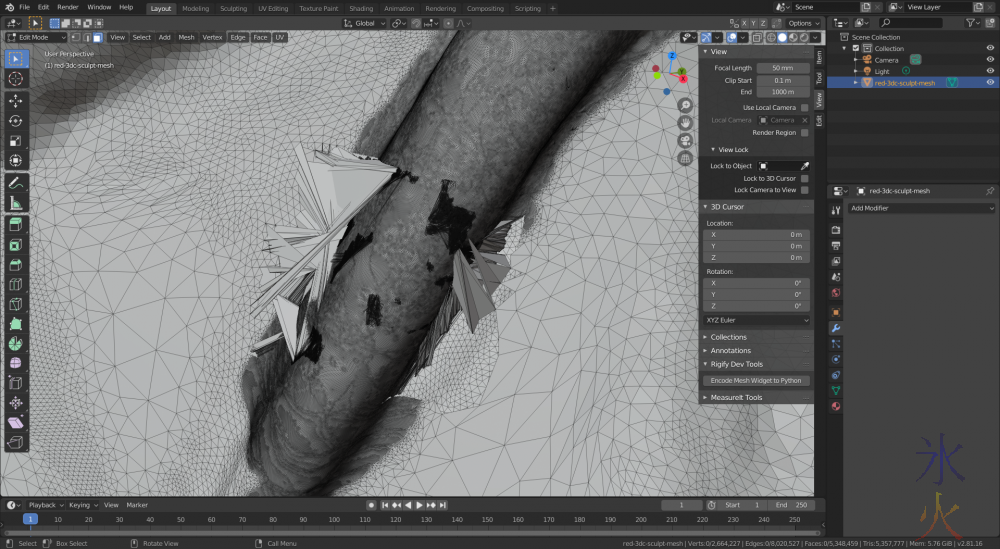 Working from the inside (so I didn't get confused by the wireframe), I tried to be neat and just get rid of the jaggy bits. It got to a point where I completely gave up trying to just remove the problem polygons and ended up cutting out the entire sections (which sometimes took a fair few goes) and on being left with the clustersods in the middle, I would have liked to use the "delete loose" in the cleanup menu to get rid of them but apparently I'm too dumb to figure out how to use it as it didn't seem to want to do what it suggested it did, so I just link selected (hover over main mesh and press L) and then inverted and deleted all the loose parts.

Then had fun patching all the holes by selecting edge loops (which often had to be selected in several stages because they weren't proper edge loops) and either hitting F (fill) followed by ctrl+T (triangulate) if the loop was open and ctrl+F (which does the same thing as the previous two operations but in one go, only works on closed loops though) if it was closed. After resymmetrising it (another thing I couldn't do in 3dC because it kept crashing) I sent it back to 3dC to finish the sculpt.

And promptly rage quit (so no screenies) because I could not for the life of me get rid of the lumpiness in the mesh.  As far as I can tell it seems to be a long running problem but only sometimes and only for some people.  In my case I was actually able to get rid of a lot of the lumpiness in the torso, but seemed like in the wing fingers no matter what I did, they would come back.  I tracked them to these pockets of super dense mesh which I can never seem to get rid of as after clearing them out with the "clean clay" tool (which has a bunch of subtools in it like remesh, reconstruct, reduce and a couple of other things I don't really use) and then going over them again with the live clay tools they always come back and always in the same spot.  As the mesh is already pretty dense I've also tried using the non-liveclay tools (which don't dynatopo) but it still won't smoothe and shaping with it brings a completely different set of problems (mostly stretched polygons in the areas that are low which then explode when you touch them with a liveclay tool).

I think the problem is 3dC's struggle with thin areas as the wing fingers and wing membranes are pretty thin.  So I spat it once again and went back to Blender, where I had previously tried using the remesher (which is excellent by the way) and caused my computer to crash twice in a row and corrupted the Blender file beyond repair (couldn't even append anything in it to a new file because it had all just gone).  Fortunately I do daily backups so only had to repeat yesterday and today's work rather than the entire week.  I'm in the process of trying again but super slowly and zoomed right in so I'm only using a tiny brush in tiny areas (and sometime after I finish this thing because I'm anticipating more crashes).

Sculpt mode in Blender has improved massively from the last time I used it (which wouldn't be hard given the last time I used it was in...[uses searchbar]...2013).  It was actually drawing smoothly as I worked over the area 3dC insisted on making lumpy no matter what, so I figured it was definitely 3dC struggling with thin areas rather than the mesh (which also has problems that I'm very slowly and painfully repairing as I go).  Blender's major issue is that when I'm working with that dense a mesh (as you can see from the black bit in the above image, it's quite overkill, that black bit was the result of an accident with some brush settings in 3dC which I didn't really notice as I don't always look at the wireframe due to lack of wireframe shade/hidden wire), cpu and temps soar and I have to watch it rather than being able to mostly concentrate on what I'm doing, whereas 3dC handles that with no problem whatsoever.

And I'm still going to use 3dC for retopo and mapping because my brain likes it better.