Or: why fyn has a ridiculously comprehensive and detailed head universe.

Like all good stories, it started off innocently enough.  I finished eyebrows and eyelashes and did some super quickie expression tests: 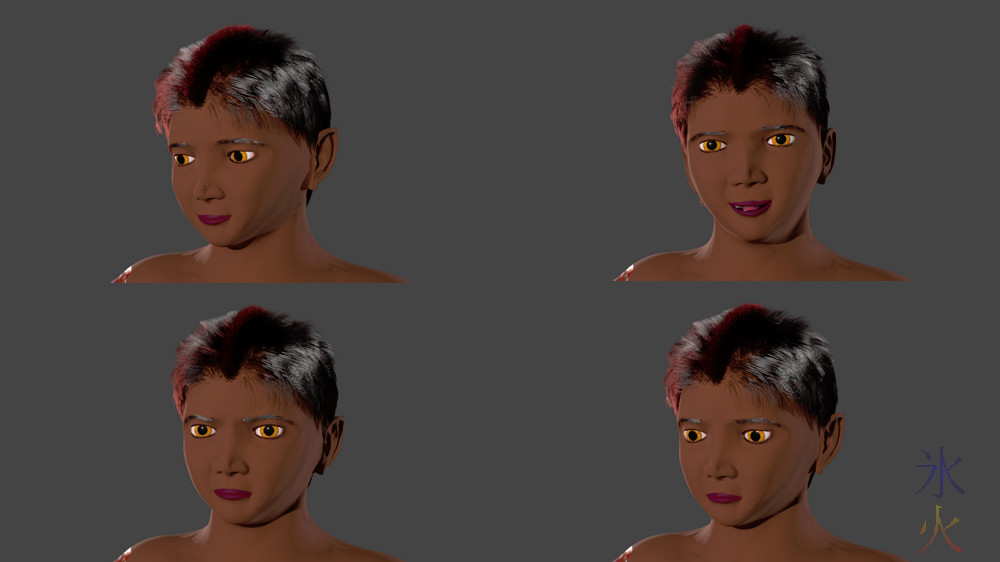 My lights are really close and pretty bright hence the intense reflection, if they're still too reflective under normal lighting conditions I'll have to fiddle with the node a bit more.

Then it was onto clothes.

I don't have many amusing dev points now that my base characters are done so I appreciate them when I encounter them, like what happened when making Zara's pants.  Somehow I don't recall this happening with Red's pants. 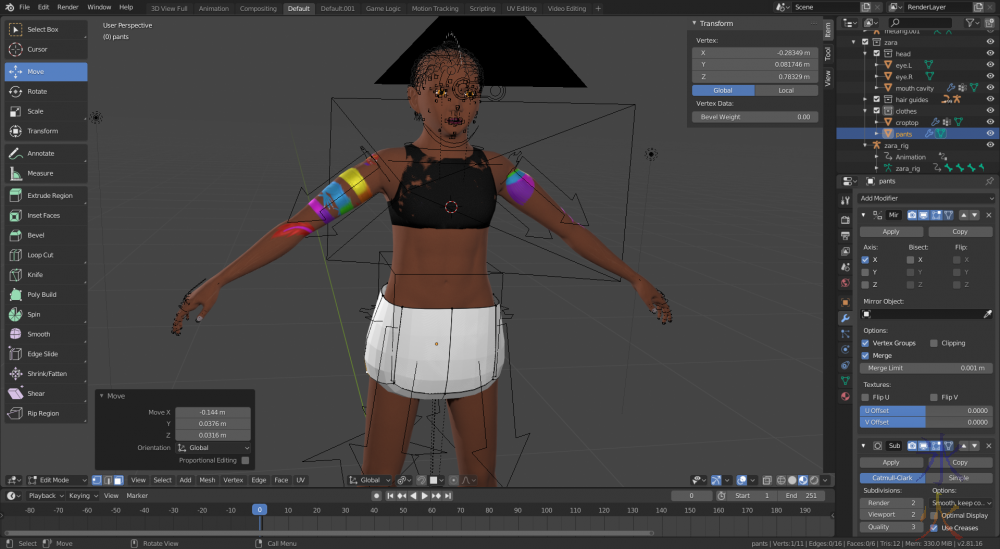 After a good giggle, I settled in to keep working.  Or at least that's what I intended to do.  But I decided that the croptop needed a design on it.  I decided it would be chi and I have that tattooed on my forearm and knew there was a reference image kicking around on my computer somewhere from when I was working on 3d-fyn.

And then I figured wait, in this time period they might have a slogan shirt in Sona.  So I used the dictionary I know about to look up "energy", the word is apparently "urana" (long u and a).  I then looked up the World Unity Alphabet which I had picked for the international script and...it was gonna be longer than I wanted when I first came up with this brilliant ploy.

So of course the next genius idea was the make a conscript seeing as the conlang uses English letters for simplicity and doesn't have its own one.  I know this stuff is hard work which is why I picked existing ones instead of trying to make my own, but just to try it out I mucked around for a couple of hours trying to make the conscript.  A couple of attempts later I gave up and decided to just base it off WUA seeing as WUA is going to be the fallback anyway as Sona doesn't require Sona-isation of non-Sona words.

Three versions later (which took up the better part of today) and this is what I'm going with. 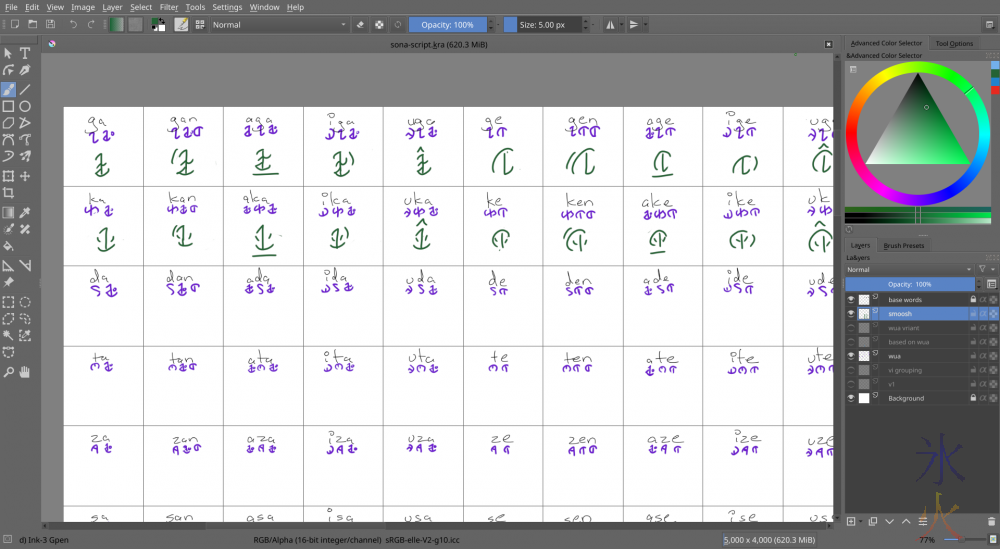 I was always going to smash the glyphs together into one.  First attempt was on two vertically stacked circles.  Second was one and that's what I ended up deciding to go with in the end.  I also played around with using closed arcs for the glyphs with left and right curves which both Sprat and I thought looked nicer but I ended up going with the open arcs because writing the closed ones was annoying the hell out of me and I feel like the open ones are visually lighter even though (as Sprat observed when I asked her opinion) they occupied practically the same footprint.  My only other excuse is that now it's the same base shape with modifications on the sides all the way through as the closed arc ones changed the shape quite a bit.

Yep, all just because I decided I wanted to put a design on a croptop x_x

Other than that, in an effort to save $52/mth I blew a bit more money than I was intending to spend on a tiny little NUC (seriously I knew it was a small form computer but didn't expect to be able to hold it comfortably in one hand XD) which I'm going to transplant the contents of my vps onto.  It's going to make my blog and the two ghost town freebies I host probably unusably slow for everyone else but I'm running them at a loss without my business and I need the money to put towards more kiddie educational shenanigans.  I got the Nextcloud instance up and running but still can't fit the aer folder or my photo library on it, so on the list of major crap I'm saving up for is for one of those small raids with two drives inside and load them up with however many Tb I can afford at the time and attach that to the NUC.

Seeing as I'm almost fully fully self-hosting now I decided to try the same with the password manager.  I downloaded this thing called Buttercup which had a really nice simple idea behind it and was the easiest thing in the world to set up (client on desktop, archive on Nextcloud, and there's browser extensions and mobile apps)but I'm not sure if I was doing something wrong or missing something from my system as from the get go (creating the archive) I started getting error messages and then had issues with the browser extension not appearing to do anything and after a while I just got frustrated with it and quit.  Then looked up self-hosting Bitwarden and even the simplified rusty version was a bit too hardcore for me (well more that I didn't fully understand what it was doing and I don't want to spend time playing with it) so I just switched to the "normal" non-self-hosted version.  It's doing the same job Lastpass does so I'll probably switch for no other reason than it's open source as at this stage I don't have a preference either way as far as ux goes and aside from clinging Gollum-like to my precious iPhone and relentlessly coveting a Macbook Pro, I'm trying to use and support open source as much as possible.

The next big job is the mailserver and...I'm kind of procrastinating as I had a really hard time with it last time and ended up needing J to figure out what was wrong and fix it.  After that the three Drupal sites and the piwik install should be pretty easy to transplant (at least I'm hoping that the piwik instance will be a simple case of packaging it up with its database and dropping it in, I've transferred Drupal sites enough times.  But that will continue to hamper progress til it's done.