Afterwards I worked on the shadow layer, and even later in an attempt to avoid going to bed so late I did more boring data entry stuff.  The good thing about doing this notes cleanup thing is that whenever I go through my notes I often find parts to flesh out and sometimes accidentally learn more things about various characters.  During Friday's cleanup some (spoilery that I'm not going to tell you about) things were explained so I now understand more stuff that was going on in the current arc.

I don't remember what I did yesterday (aside from planning to clean the computer room and not doing it) but must have done more work than I thought as after going to a university open day with the family, doing some much needed filing and finally putting away the Pokemon cards that J had bought me before I asked him to buy me Splinterlands cards instead as I haven't had time to play Pokemon for a while but have been playing Splinterlands daily (less time and effort required unless I'm getting routinely annihilated which happens frequently but I can do other things while the game plays through after I've set up) and failing to clean the rest of the computer room again, I managed to finish the shadow layer.

We're all done with this one now.

And here's a shot of the underside which probably won't get seen a lot (or may do as I'm not sure of all of my shots yet): 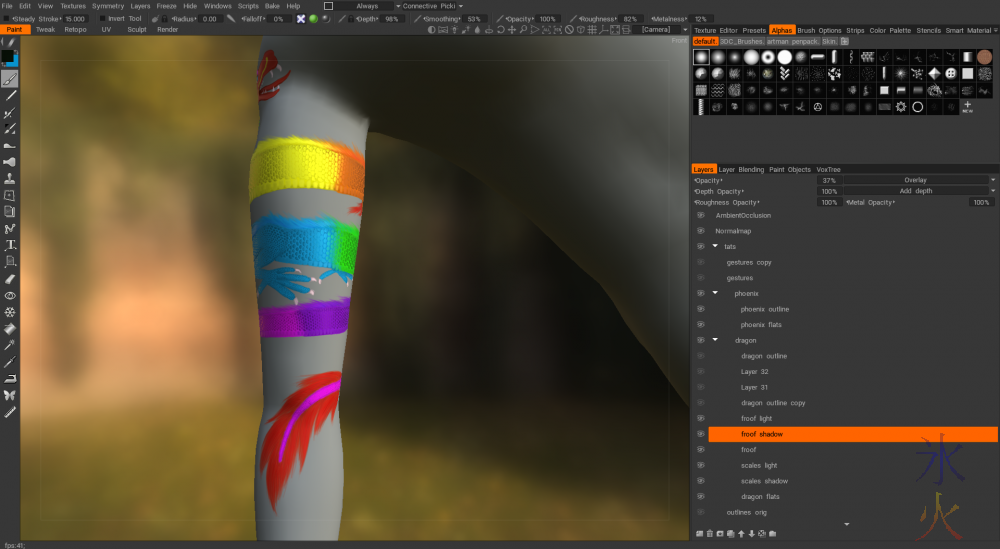 Phoenix, scars, and normal map+detail painting to go.  I'd love to say hopefully those things will collectively take as long as the dragon tattoo, but we'll just have to see given my detail obsession.