14yo ended up binging on some new David Attenborough documentaries that had come out on Netflix (called Our Planet or something to that effect), 10yo was in and out of the house and mostly telling me fantastically detailed stories happening in his various head-universes while he was outside looking for all intents and purposes like he was running around waving a pipe.

On the bright side, 12yo was off to a flying start at school, described by her HASS teacher as "a perfect student". Scitech classes kicked in a bit later in the term than I thought they would, so on one of the days where I thought we were going to go to Scitech, we ended up going to the Maritime Museum in Fremantle as 10yo had been big enough to go on the submarine tour for a while, we just hadn't gotten around to going. The HMAS Ovens was an impressive size, and apparently it's a small sub! The entrance and exit were modified to make it easier for tourists to clambre in and out without killing themselves.  The entry was the torpedo room at the front of the submarine (apparently there used to be one at the back of the sub too but that room got refurbished into a schoolroom for newer recruits when torpedoes became advanced enough to guide and thus could be fired out the front and then be turned to go behind the sub instead of ahead of it), Then we moved further back through the submarine with the guide explaining how the people on board lived and worked.  It was pretty cramped with just us in there, would definitely have needed to not be claustrophobic and get along with your crewmates to be able to live in such conditions for extended periods. Seeing as we were there we also whirled around the Maritime Museum which was pretty small and didn't take too long to get around.  The kids ended up splitting off and I meandered after 10yo as per usual so I'm not really sure what 14yo ended up looking at.  10yo did look at displays and made attempts to read the signs but usually gave up and moved on to the next thing if they were too long (and in the cases of some of the bigger information panels didn't even attempt them).  The most fascinating thing was the preserved megamouth, and 14yo also had a go with some oldschool navigational tools. We went early in the first couple of Scitech sessions so that the boys could play around, but eventually just started getting there on time. The program covered a few areas and was generally difficult to photograph as I was mostly concerned with taking photos for the blog and the kids were usually working in groups.  I got some shots from the geochemistry class. And one of those elusive work samples from 14yo who agreed to be the scribe for his group as it turned out both he and his partner had terrible handwriting but 14yo was quicker.  10yo was in a group where someone else was the scribe. I ribbed him both for his accidental misspelling of the word "pretty" (he isn't quite sure how he did that either, blaming a brain fart XD) and for needing more practice.

JJ had to take the boys to one of the Scitech workshops when I had a day where I collapsed due to sickness/exhaustion/both, and the boys brought back the stuff they'd done in their workshop.  The aim had been to create something that would hover in the airstream, using resources "purchased" from the "shop" with tokens.  They'd had to work in groups but 10yo had apparently ended up working on his own as his partner allegedly didn't do anything but tried to claim some of the credit for the work.

All the kids are also still happy to do photoshoots our way apparently, as this spontaneously happened when I told the boys I wanted to get a photo of them with their inventions and 12yo decided she wanted in on the photo too and I said sure jump in. 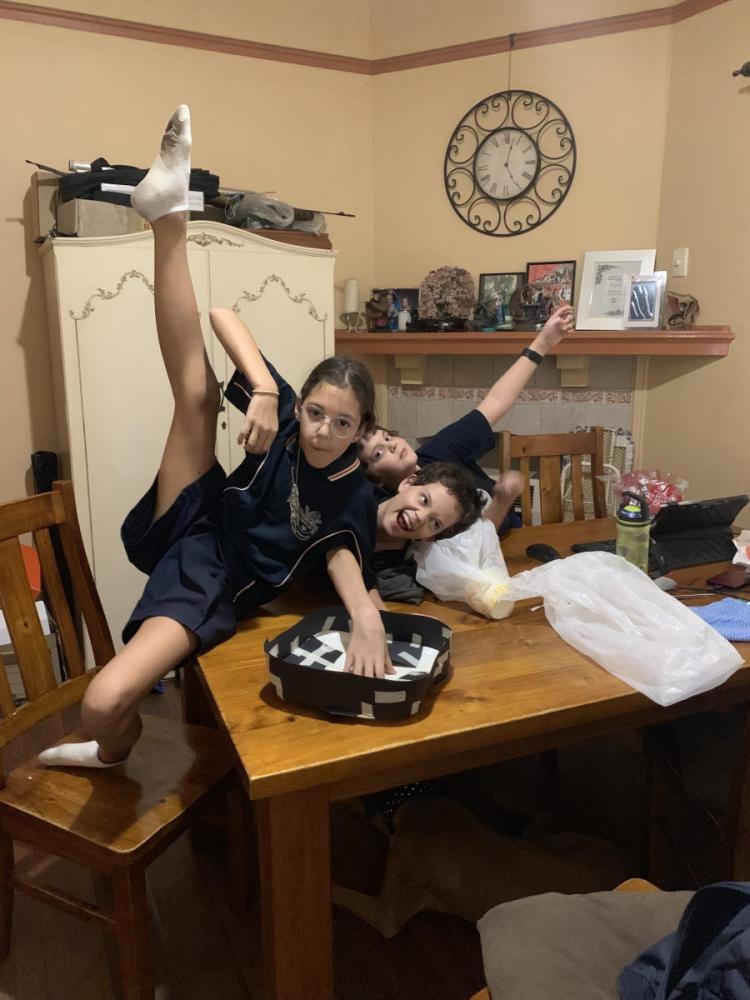