Yeh yeh I'm late again.  Much shenanigans happened on the weekend taking 11yo, a bunch of her giggly friends and 13yo to Bounce (9yo was meant to come to but he'd sliced his toe open on Thursday by deciding it was imperative that his iPad be unlocked on the way to the car rather than in the car after he'd clipped in and thus he didn't notice the kerb I'd parked next to), and then one of the girls stayed over (which I found out was happening on the day, fortunately I'm cruisy).

Also I didn't visibly progress as much as I wanted.  As far as the work is concerned well I'd love to tell you how any times my perfectionist tendency has kicked my sorry tail to the kerb repeatedly (aka I kept redoing the thing because I wasn't happy with something or other and because of how the scales intersect it was really hard just to remove the section that was causing the problem) but I've long since lost count.

I was discussing with Sprat how I really would like the tattoo to be slightly animated to respond to the lighting conditions but I didn't really want to figure out how to animte the tattoo.

Then I had this stroke of "genius" (aka it was blatantly freaking obvious, I'm just slow), that I could just use gloss. 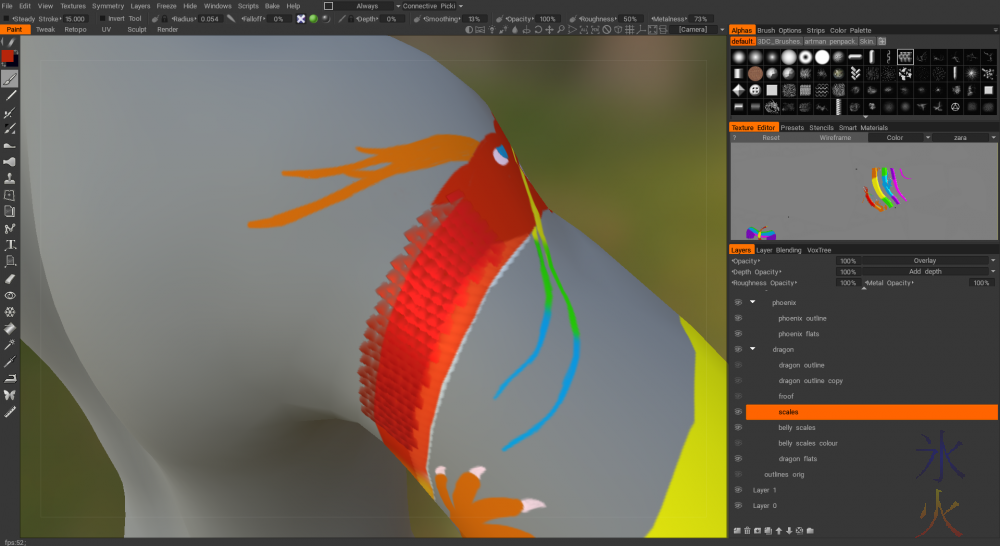 So now the tattoo responds to light like I want with no extra effort.  I just need to remember to change the roughness and metalness settings as when I do the colour picker to grab the colours it also helpfully grabs depth and roughness too.

I'm going to try my best to at least finish the scales on the dragon during the alleged work session I have tomorrow (it is timetabled in but I keep getting dragged off to do other things) but realistically what will probably happen is that progress on this will slow right down if not grind to a complete halt as I really, really need to get cracking on those Christmas presents and finish October HS Misc preferably before Silly Season fully sets in.