One of the things about not learning in an institution is accepting that the stuff taught and learned in institutions isn't the grand authority on all that's worth learning.  I know this, but sometimes I don't really know it.  Like on her day, 11yo said she wanted to get her nails done.

My immediate response was "pick something educational".

I'm not sure why mouths sometimes just randomly fire off before engaging the logic part first as not only would it make a lot of things so much easier, it would probably also make the world a better place in general.  11yo has spent a couple of years studying makeup artistry, nails were part of that, so we would learn how nails got done professionally.  Also, I got her to research the nail places at the shopping centre we were going to in order to get some idea of prices.  As it turned out none of them had prices on their websites (which is really annoying) so we had to do actual legwork.

11yo settled on a place with reasonable prices and we learned how nails were done. She wanted me to get my nails done with her but as it's totally not my thing I just ran my battery down playing Pokemon Go and steeming while waiting for her.

This month also saw the start of dance rehearsals (the first session was actually end of last month but I managed to miss that date as it was listed at the top separately from the list of the rest of the dates.

We hit up the zoo with Nanna, Pop and 2yo cousin as the dinosaurs were back.  I was a bit dubious about going in on a Wednesday as previously that was the cheap adults day and it's usually packed out but they don't seem to be doing that anymore and while it was a little more crowded than usual probably due to the dinosaurs it wasn't as bad as I thought it would be.

As there were no cassowary chicks the cassowaries were more chill. What feels like ages ago but isn't that long ago in the grand scheme of things, one time when I took the kids to the Perth Museum, 9yo, who was then 3 or 4, encountered a moa egg and screamed "BEEEG EEEEGG!" When he noticed one of the cassowary information signs he had a moment of "WHOOOOOOAAAA!" The toddler was apparently scared of the really big dinosaurs.  Meanwhile 11yo (who was doing the activity sheet) found a good use for her brother. 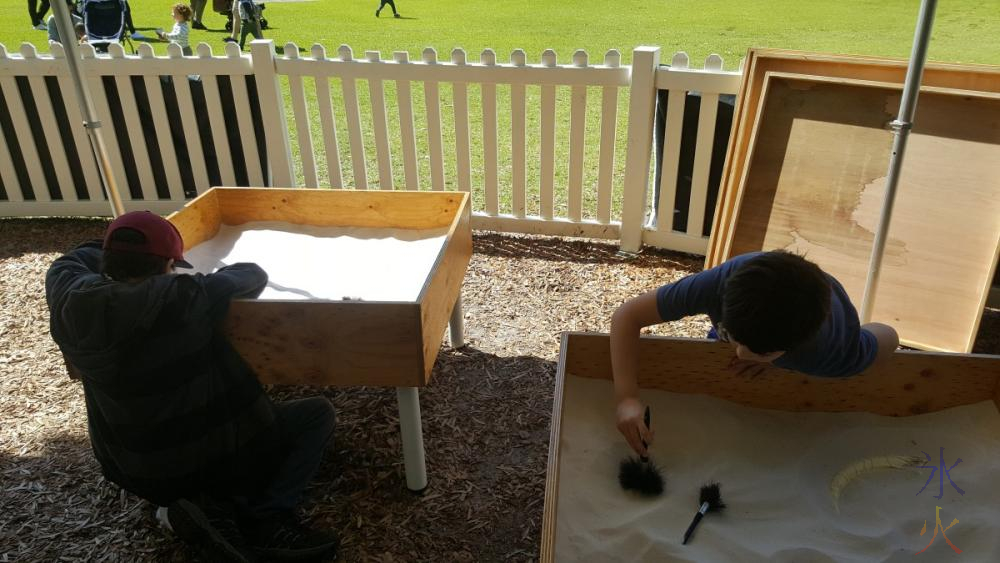 Sometime was spent at the playground and in the drumming hut where the boys managed to make up a pretty decent beat together: Age and the psychologist visits have seen 9yo come in noticable leaps and bounds now as his patience and attention span have vastly improved.  Previously he would have just merrily bashed away at the drums doing his own thing.  Here the boys were actually looking at each other and coordinating the drumming to work together.  The zoo wasn't as crowded as I was expecting but still busier than usual and normally 9yo would have started melting down, but he lasted for quite a while and was starting to get stroppy by the time we needed to leave anyway due to the parking running out.

There was more making stuff out of boxes with 13yo's old Makedo kit: The various connectors of the Makedo kit also got used as currency in a game the boys made up.  The small blue things were "bluedallions" and six of them were equal to a "nail" (the long things) and I can't remember how many of those equalled the hinge or if the hinge was an item they were trading.  But they had this elaborate trading game going on involving currency and item exchanges. 11yo got a silver on beam, 13yo got silver on rings, gold on parallel bars, silver on pommel (which he was mildly surprised about I think as he doesn't particularly enjoy pommel and refuses to pendulum swing higher even though he's now plenty flexible and strong enough to do so), gold on floor and second all around.

9yo has decided he wants to be a Dtuber, and we then had to imaginatively work out a setup that was going to work as I currently don't have an external drive for the sp4 and as it turns out from 11yo trying previously it can't seem to cope with OBS anyway (which is slightly bizarre as 11yo seems to manage fine on her Macbook Air which I'm under the (probably incorrect) impression is close enough in hardware specs). It worked out all right and we discussed the kind of setup he'd need to be able to get his mug on the screen like he's seen some of his favourite Youtubers doing, which is going to require money, which he decided to try to save up for possibly with help from the Dtube videos...except the iPad is currently short on space so we can't even export the iMovie project out to something that can be transferred onto my computer to post.  So we're going to have to figure out something else there too.

Meanwhile because he was otherwise enjoying making videos his sister made a guest appearance in the second video doing a reaction type thing to playing the game he played in the first video for the  first time. We currently still haven't quite figured out a way to get the actual videos off the iPad, it may require some additional hardware, but we'll get there eventually.