March kicked off with Perth's first steemup.  The kids got to have some interesting conversations with new friends and encouraged to continue blogging (except for 9yo who disappeared off to the pool for most of the thing). 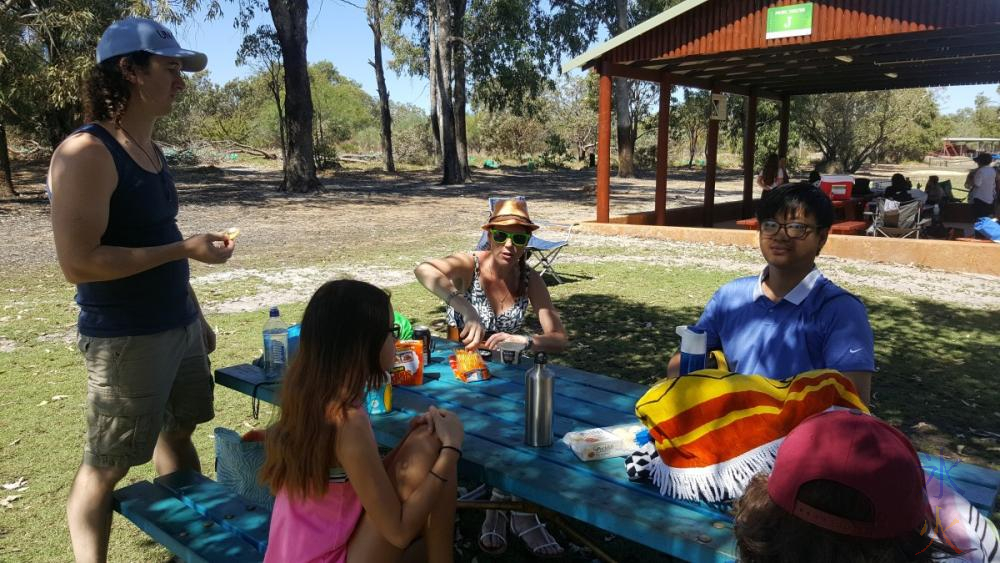 The steem colours I sported in my mohawk so everyone knew where to go are still in!

9yo made his own "Oculus Rift" out of his snorkel mask and two toilet roll tubes (and unfortunately I can't post pictures of it in use because he wasn't dressed appropriately), and some "games" which involved pieces of paper being cut out roughly in the shape of the snorkel mask and taped on.  I took a photo of the side where he wrote the names of the games but got distracted before being able to take one of the picture sides, and then JJ managed to mistake them for "rubbish" and chucked them out.  We were very unimpressed. 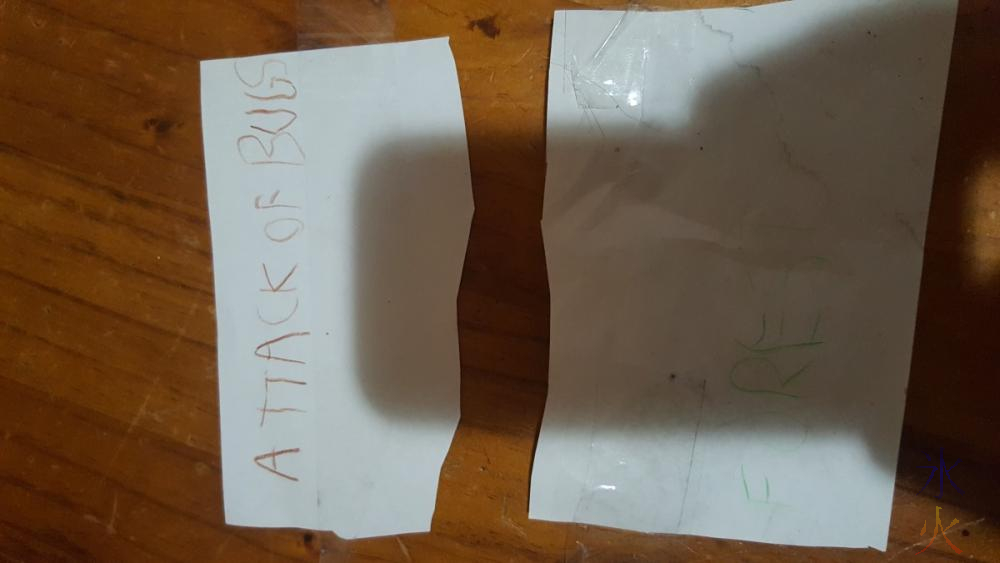 We had plans for youngest's birthday but had to change them last minute due to unexpected cost.  We were going to go to The Maze, but we had free passes.  After realising how much it was going to cost for the people who didn't have free passes, we quickly changed the venue to the Garret Rd Bridge Park, which was nice and central to everyone that was coming, and we hadn't been there for a while.  I think it might be something to do with adhd or autism that makes youngest not want huge birthday parties (not that he has a lot of friends anyway, he only remembers a few of his friends' names, everyone else is either "my friend" if they're a friend whose name he can't remember or "someone" if they're not), he wanted his best friend (who was in the end unable to make it) and his favourite cousin there (we did invite the other cousin but they couldn't make it either), and his grandparents.  This worked in our favour due to the last minute venue change. 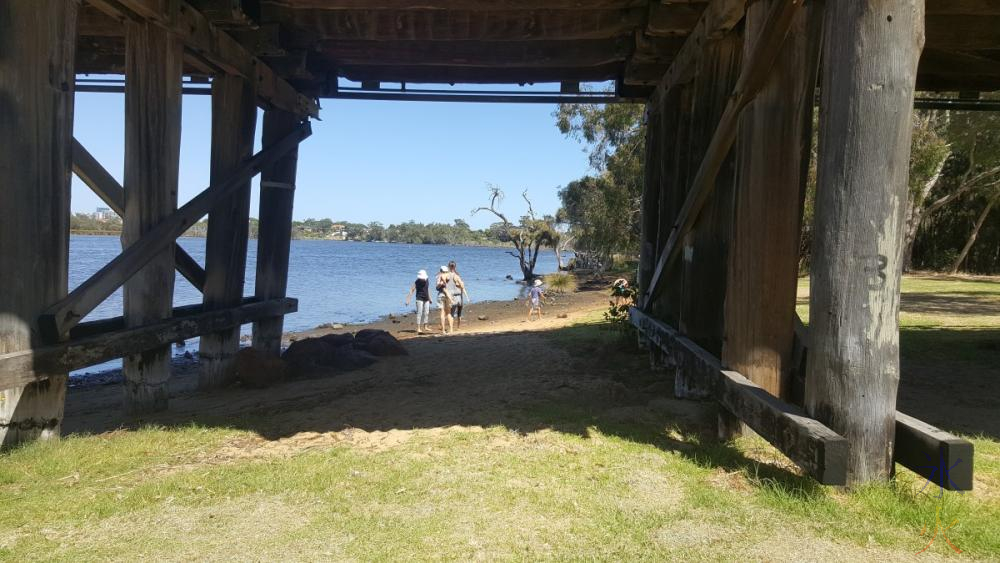 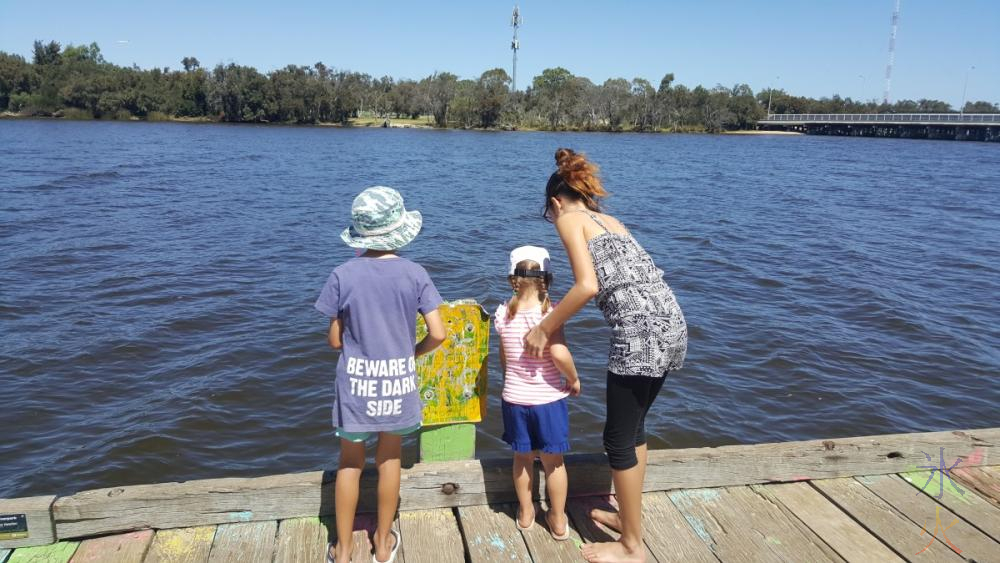 A gaming session with JJ of Adventure Time Munchkin that JJ had gotten from a friend who was getting rid of stuff in preparation for a move (and it seems to be the only version of Munchkin 11yo will actually play, we have the original as well): 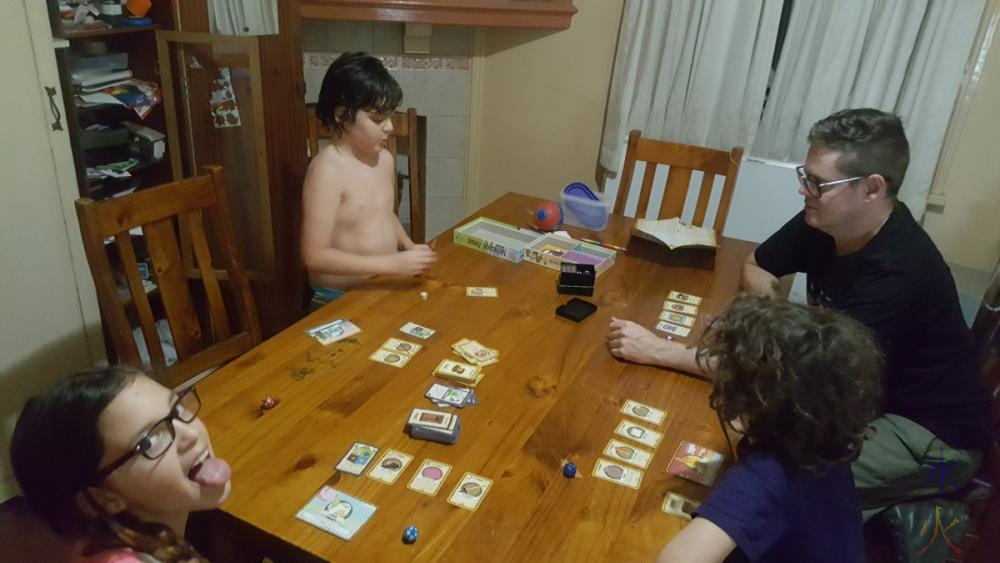 Best part of the game was when 9yo "kicked down the door" and went "looking for trouble" and found some level 1 cuties which he could have beaten without batting an eyelid had not a combined effort from everyone else turned it into a level 22.  He still managed to beat it, but only just.

Then there was one super-productive weekend where more of the skate ramp was dismantled, and a friend came over to help take down the cubby house.  This was supposed to go to a friend with a young kid who would appreciate it, however the boys found out as they were dismantling that a lot more of the wood than anticipated was rotting or too weather damaged which made reassembly impossible.  Some of the wood was salvagable, so our friend is warehousing it and will find a use for it if we don't.  While they were hard at work, 9yo decided to write a reminder on the whiteboard: and the bigs took over the kitchen because 13yo decided he wanted to make some Russian pasties as shown by this Russian chef Youtuber that he watches, and 11yo decided that she wanted to make oatmeal cookies.  Both of them wanted to do their things at the same time of course.  Fortunately this was possible as they were using different parts of the oven and worked around each other with counter tops and utensils quite well. 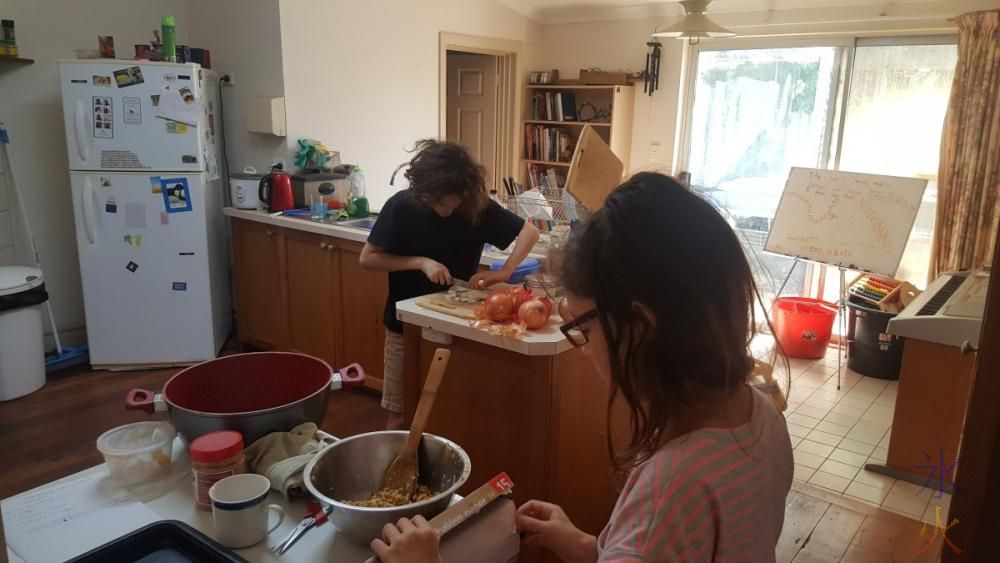 9yo helped out 13yo with  the pastries for a bit. 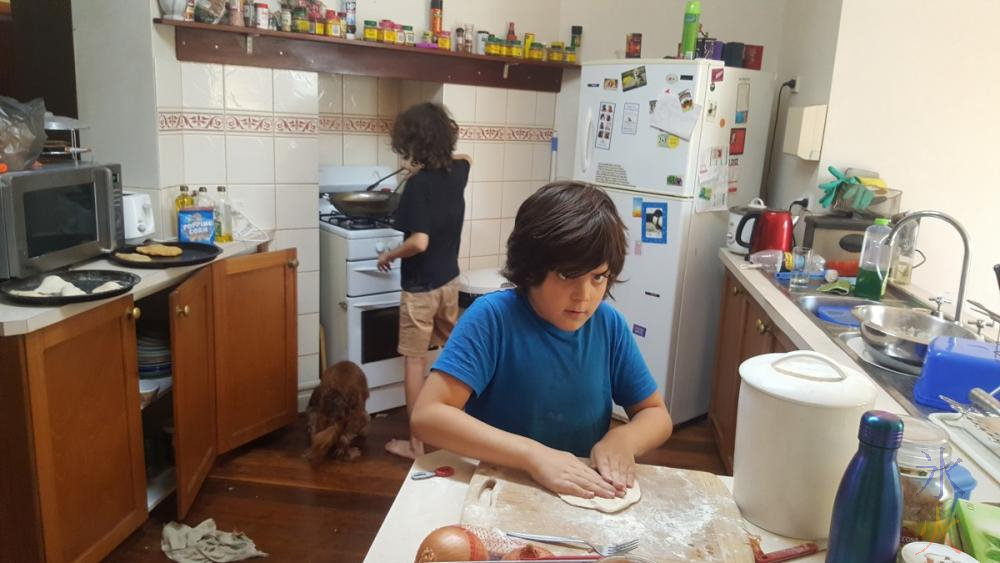 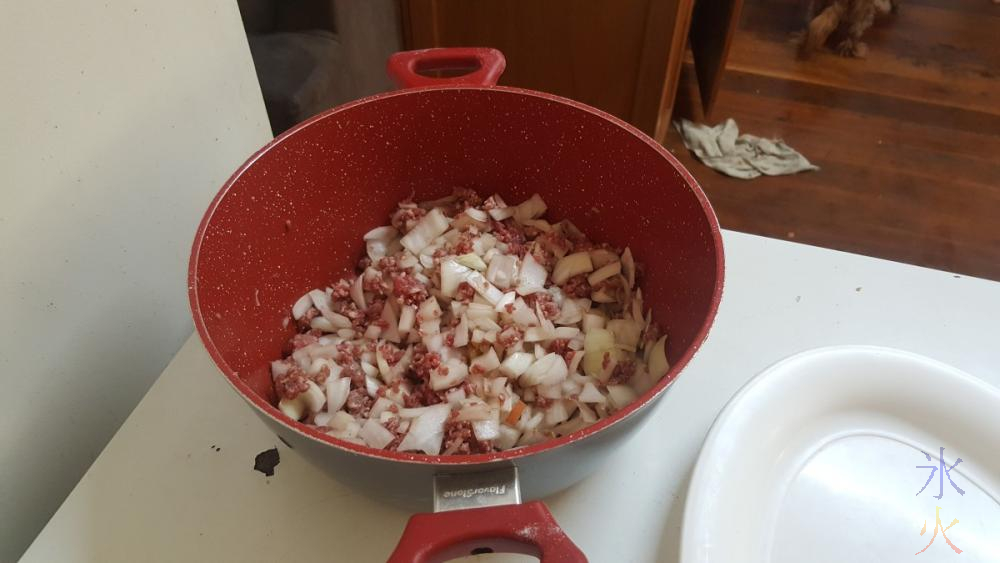 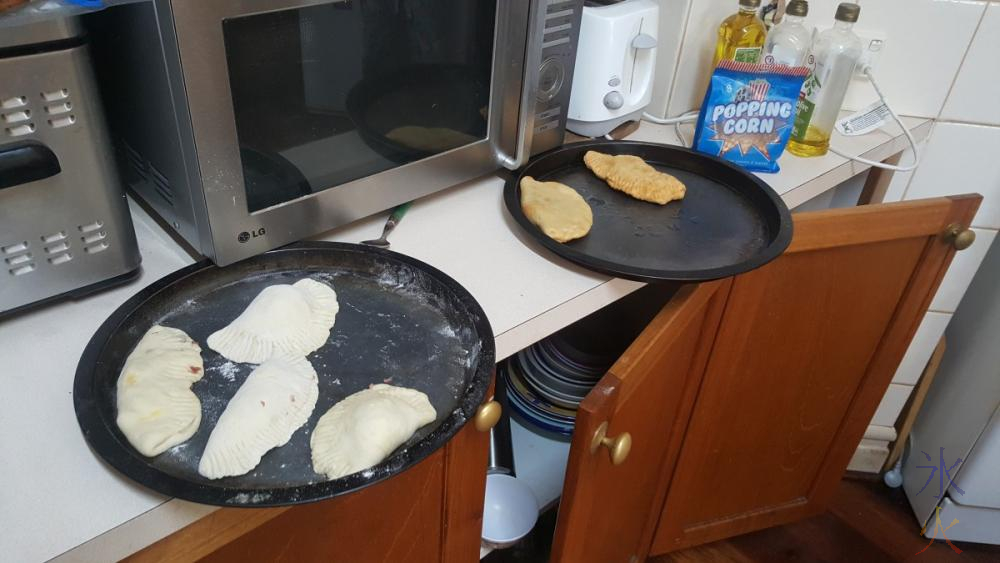 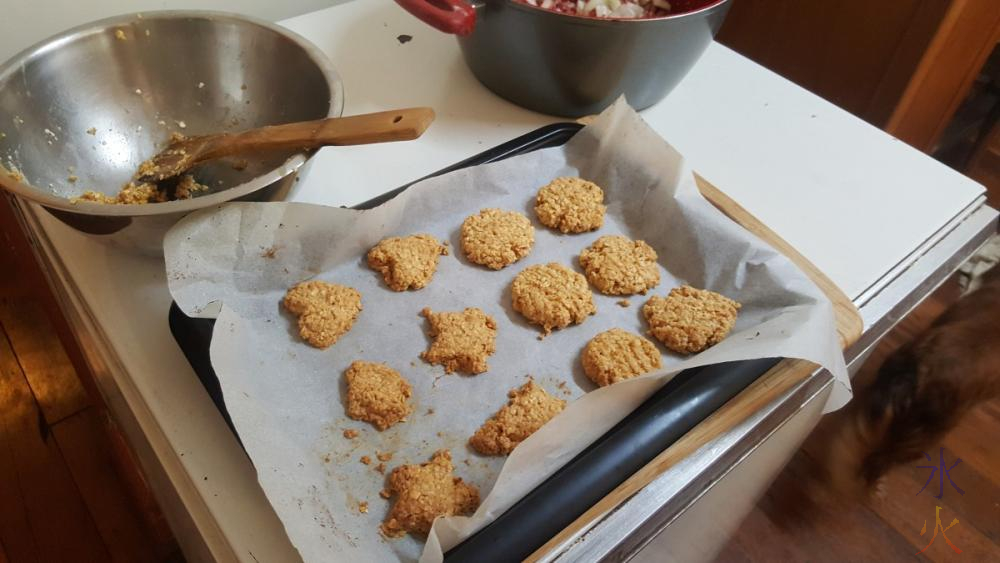 After all that, 11yo helped 9yo make a huge batch of popcorn, they blockaded the side door with the spare mattress and closed all the curtains to make an impromptu cinema and feasted and watched Pixels.  I snaffled some leftovers on a couple of trips past, the pasties were too filling and defeated us, all the popcorn and cookies evaporated.