Apparently the water was freezing. The cold got a bit much for 13yo after a while and he came and chilled warmed with me on the rocks. The water temperature did not slow down the 8yo waterbaby in the slightest. 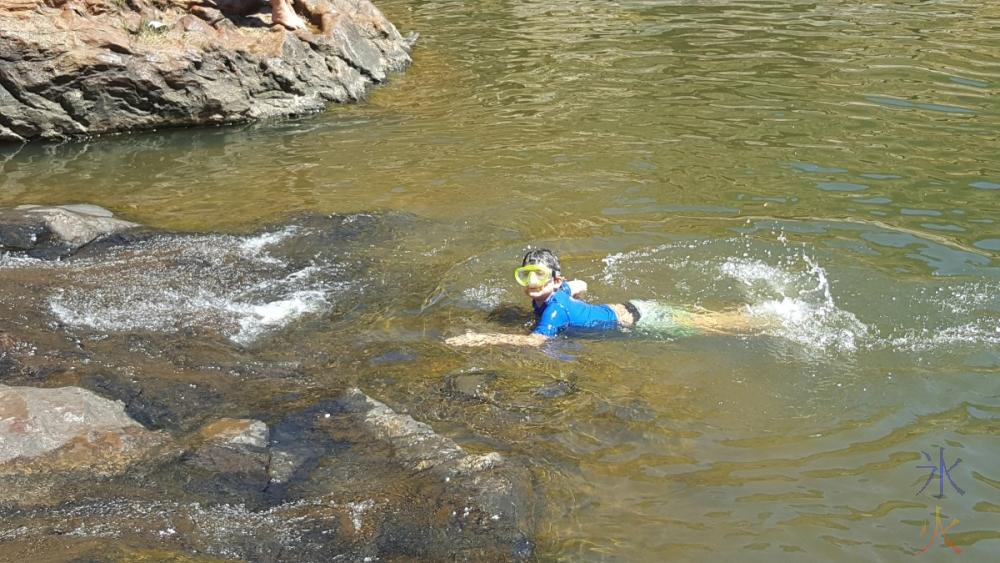 Both gymnastics clubs had end of year displays lined up, however 13yo piked out of the other one as he'd stopped enjoying the FreeG class due to accidental overcrowding (there's now a lot of classes for this year).  We'd sat on the stage as we usually do (because everyone always wants to sit on the mezzanene floor for comps and badge tests so we usually don't) and then we ended up at the back so all we got were really long shots.  I ummed and aahed a fair bit about including the video but have decided not to as they're a bit shaky and drifty due to JJ having had to hold his phone up the entire time.

I started the annual photobooks for the grandparents a little bit late (which resulted in my parents not getting theirs til after Christmas, oops), and 11yo decided that she was going to help me with it this year.  After stalling for a little while trying to work out what to do with the photos, we worked out a system whereby I selected photos and threw them onto pages with some vague semblance of a theme and she did the decorating and embellishing.

Then there was the Book Incident. 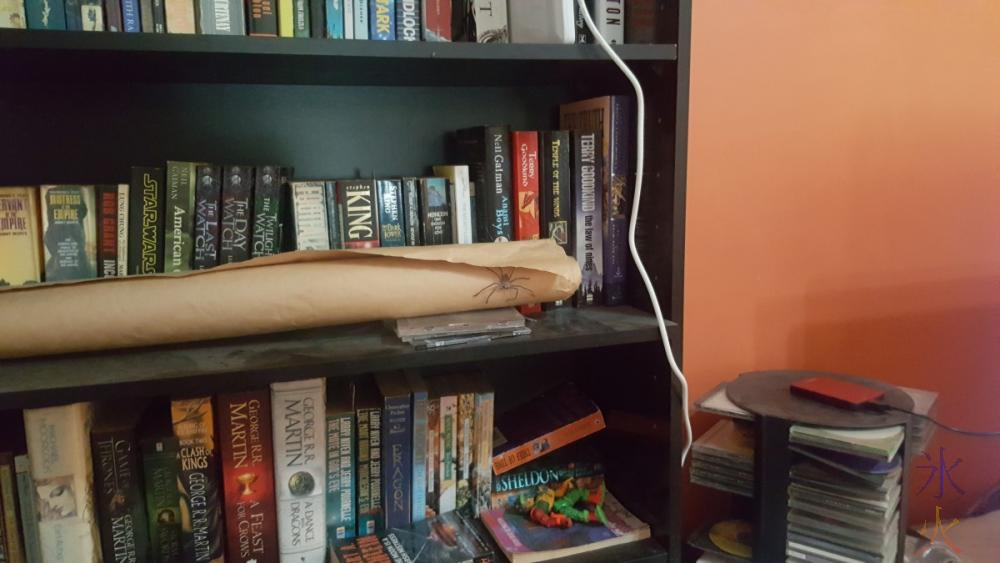 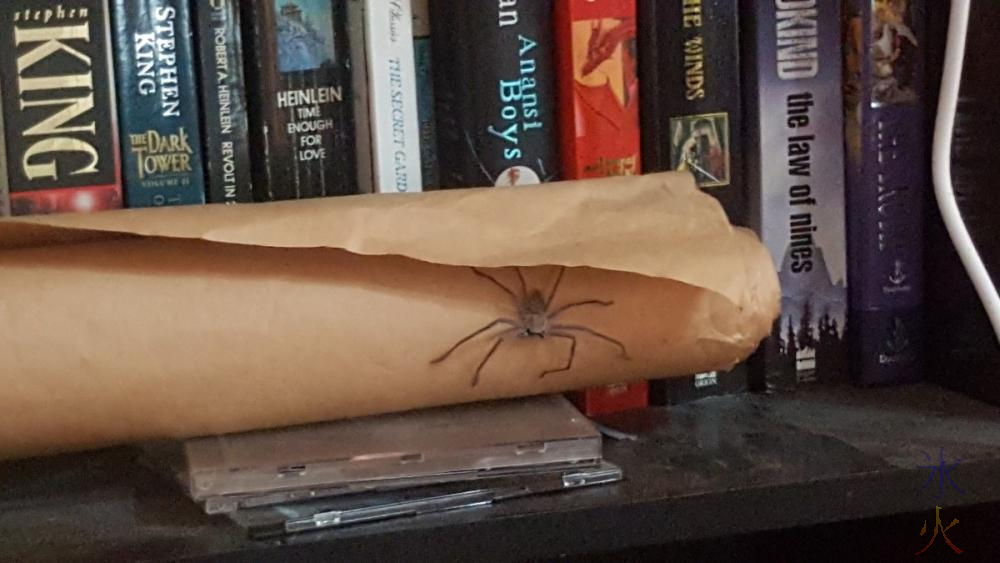 After the hilariously terrifying shenanigans were over, I sent the photos to 13yo as he wanted to try identifying the spider using  the upload image search.  Google did a really good job identifying what was in the image, unfortunately it wasn't the answer we wanted.  So 13yo resorted to oldschool keyword searching for an image and eventually identified the huntsman for what it was.

Another homeschooler organised a trip to the Pompeii exhibition.  I inconveniently got sick on the day but JJ was able to take some leave and take the kids. The Pompeii exhibition tickets included access to the Maritime Museum so they hit up the rest of that afterwards.  JJ did not take as many photos as I might have. 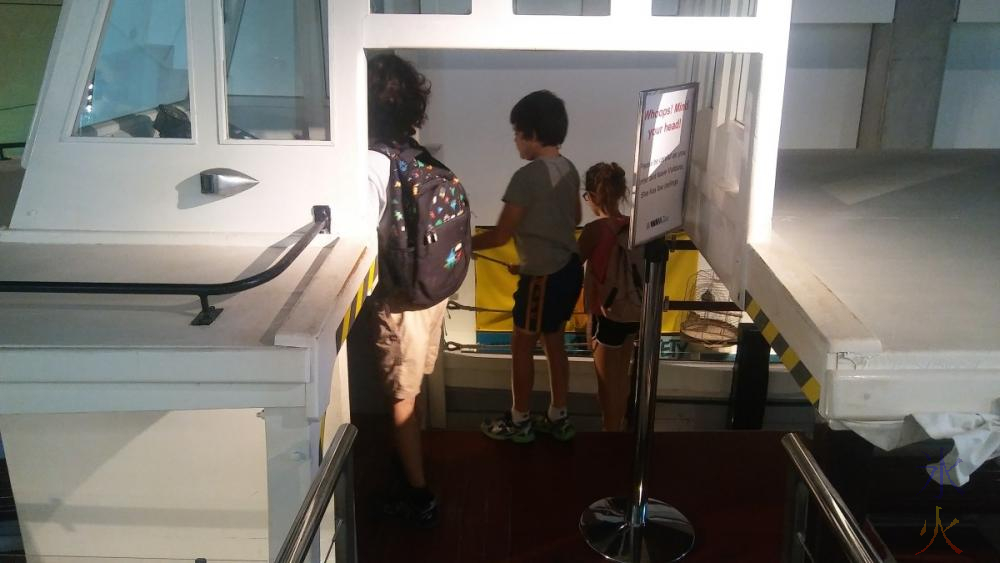 We managed to slot in a beach trip and fish and chips with the outlaws before Christmas.  The kids requested many photos and videos for their blogs but then never got around to actually writing up the beach trip.  They had a lot of fun bodysurfing (and learning where the rips were) in the choppy water. 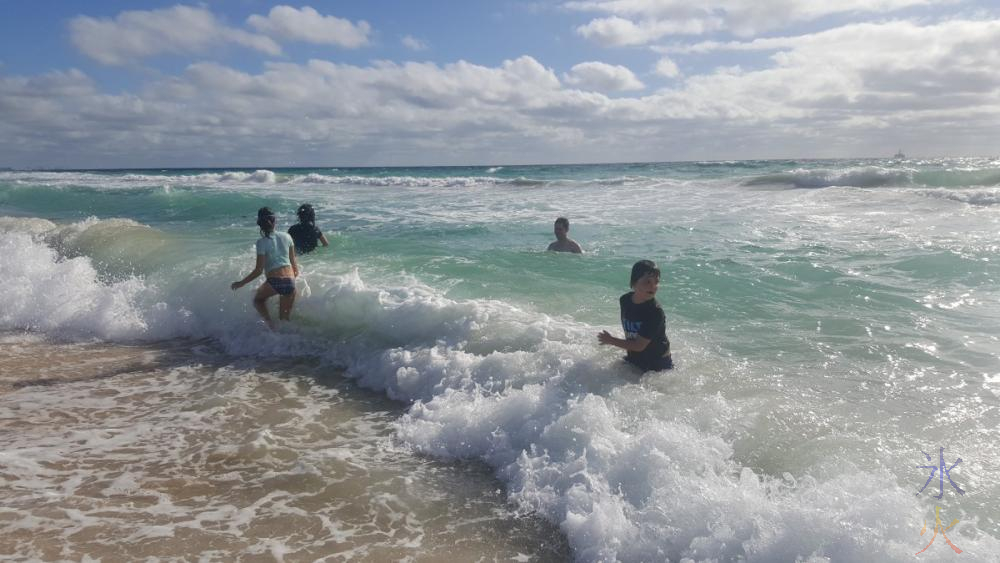 I was trusting enough of my allegedly waterproof phone case to take the phone into the water with me but not trusting enough to try underwater shots or let the phone get too wet so every time I got hit by a wave I would lift the phone up high or put it behind my head.  At one point I accidentally took a photo while doing so. 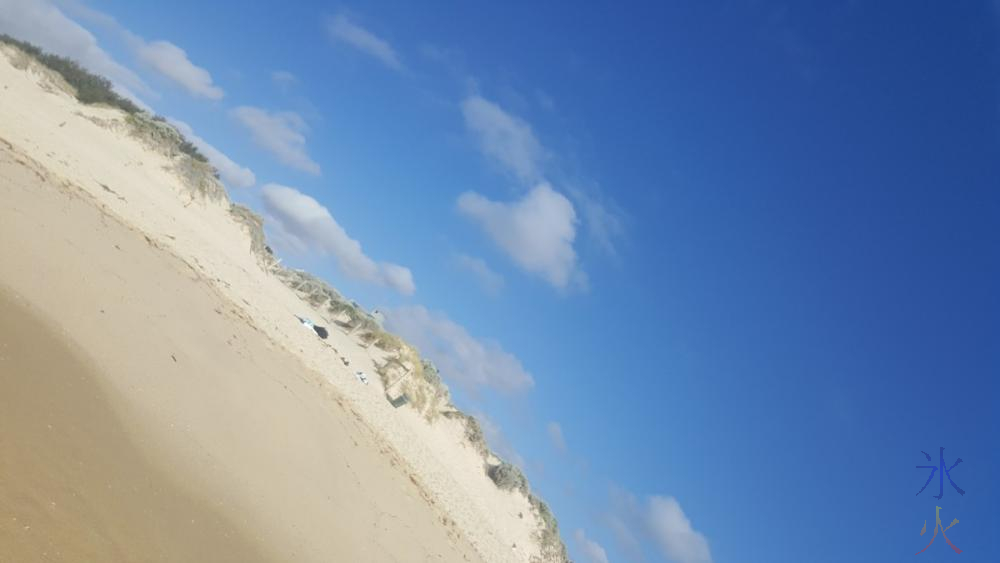 Yep, that's an awesome shot of our stuff on the beach.

We went for a wander around Perth and found some of the giant Christmas decorations that had been put up as one of the city's Christmas activities, though I didn't get many shots as there were a lot of people roaming around and 8yo was more prone to wandering than usual that day.  We then thought it might be fun to make some Christmas cards for steem.  So 11yo drew up a steem logo and we headed over to the oval to do a photoshoot.  Crankiness set in and the kids piked out of doing the actual work really, really quickly but did do the blog posts at least (located here, here and here).  13yo didn't like any of his shots from the photoshoot so ended up using a selfie he'd taken with my phone in Perth.

Just before we finished up the photoshoot for the day 13yo revealed that he could do handstand pushups.

It was the outlaws' turn for Christmas this year so we headed on up to Jurien Bay for a couple of days.  We hadn't even left our city before Little Fat Dog decided to climb onto the esky to see out the window better and ended up on my lap for the entire trip up.

Mother-in-law had decided to let the kids decorate the tree so that was waiting for them when we got there.  Mother-in-law didn't take long to scurry off to do some errands, I decided to go along to help carry things so I left my phone with the kids to record their progress under the benign negligence of JJ and Father-in-law who were on the premises but doing other chores. 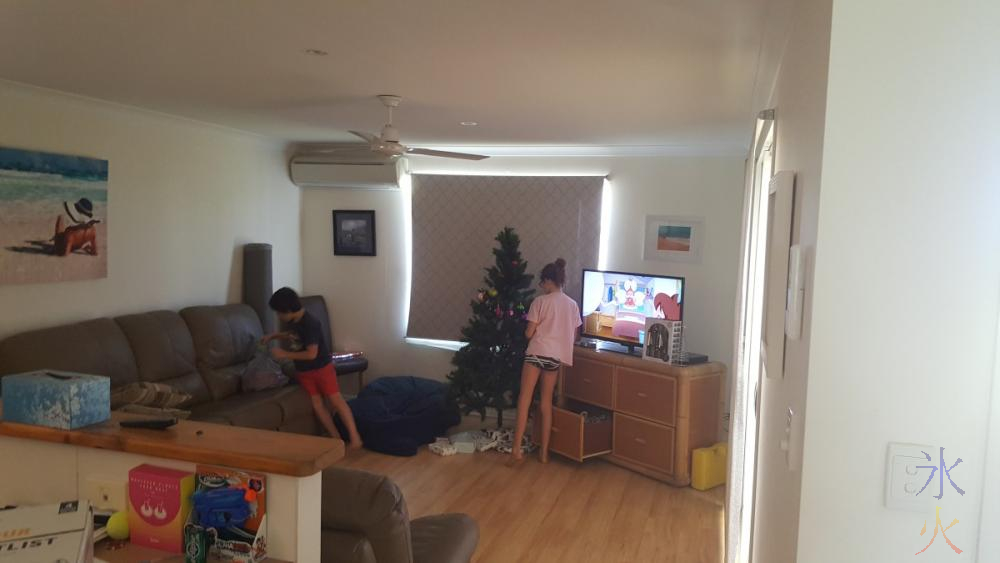 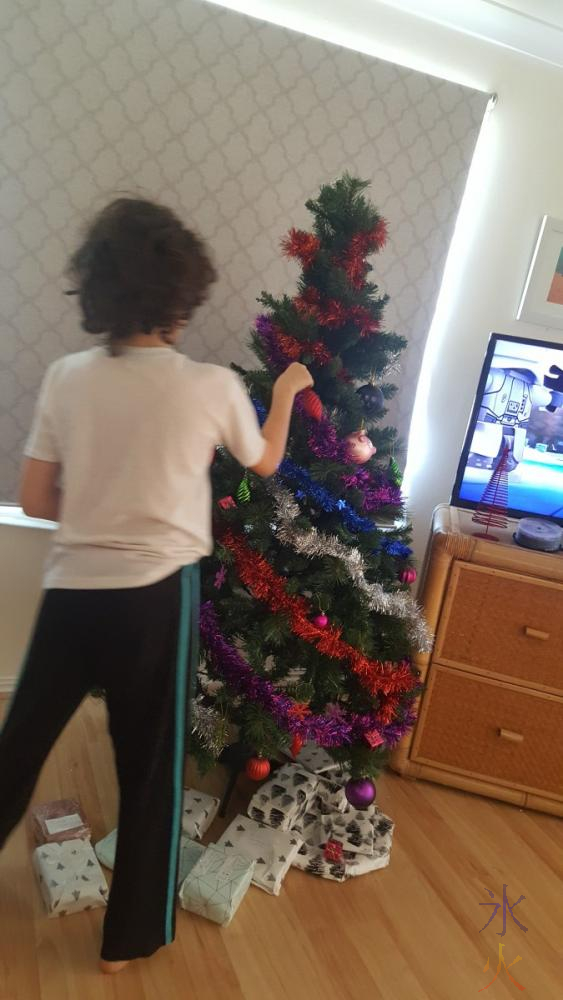 The bigs then helped their nanna in the kitchen and 13yo also assisted their pop outside with the weeds. Christmas Day started as it usually does with opening presents.  The church service in Jurien Bay seems to be later than the one on Christmas Island so it was all done before the grandparents toddled off to church, leaving us with the task of starting on preparations for Christmas lunch later.  Before that though, more beach. The water here is stunning.  JJ reckons that the water was fine and it was just the fact that it was close to 40C that day that made the water feel like it had just flowed from directly around Antarctica, but the bigs and I thought it was just COLD.  JJ and the small one didn't and once they'd acclimatised much quicker than the rest of us, they started heading towards the platform.  13yo eventually joined them and 11yo who took too long to acclimatise was terribly upset that she hadn't gotten to go with them.  I then plunged ino the FREEZING WATER (I'd chickened out much earlier) to be able to take her but JJ and the boys were already heading back and warning us about stingers. 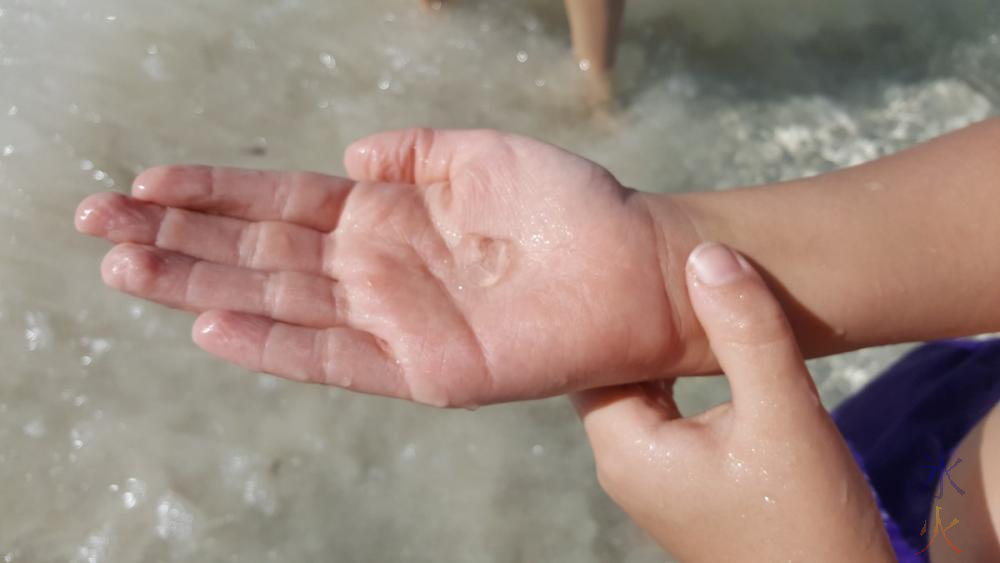 We eventually went back to the beach cottage for vinegar and showers and to prep for Christmas lunch.  The Jurien Bay Fire Brigade was driving a Santa Claus around.  The kids knew better than to trust random strangers handing out candy so waited for the okay before collecting the goods. 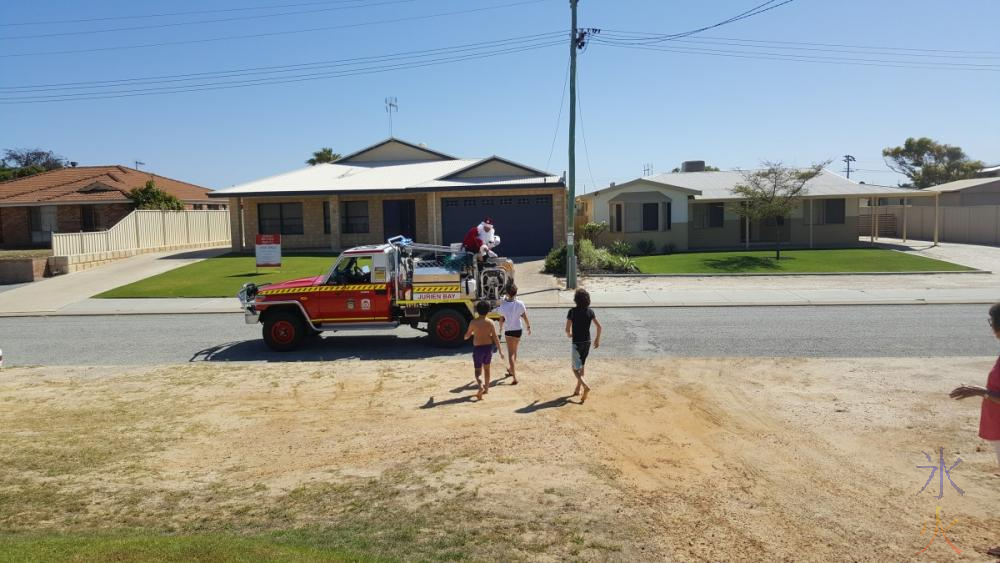 After a great Christmas lunch, there was backyard cricket, hanging out with family, brief rest periods and then Christmas dinner which was prettymuch leftovers from Christmas lunch plus a few extras and trifle and some berry thing for dessert (yes there were two desserts, and somehow everyone managed to fit a serve of each in).

We were heading home Boxing Day which meant kids and dogs were taken to the beach to get worn out for the drive home.  JJ and his sister took the kids to the jetty while I walked the dogs from the beach cottage. 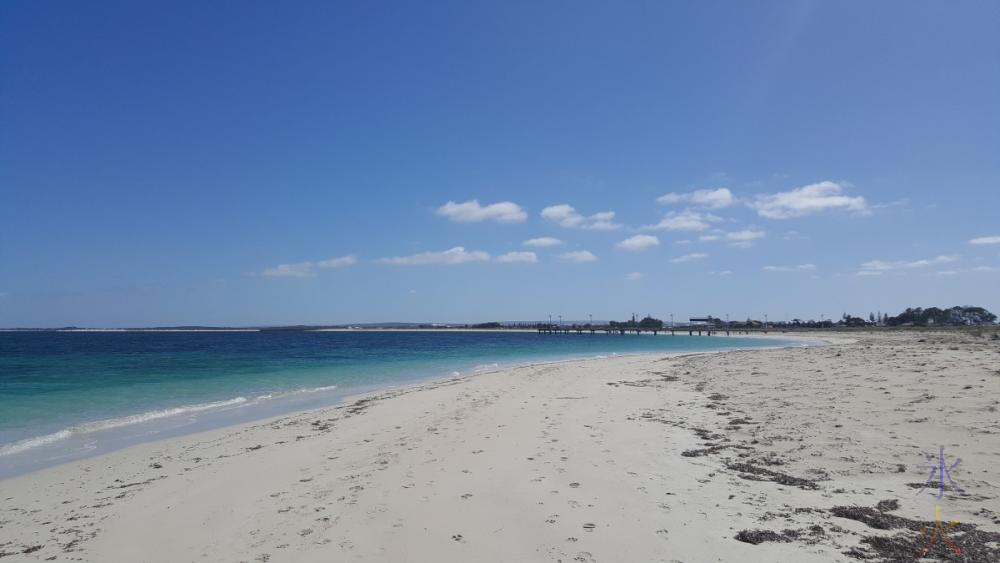 Then walked back with 11yo in tow. After we got home the Christmas presents that had been ordered online finally arrived, the kids got a floor mat to add to their gymnastics equipment (11yo got a foam beam last Christmas or so but it's seen limited use now as she seems to need a beam that doesn't give so much when she's trying to do things) from my parents, and a bunch of sciencey stuff from me and JJ.

8yo got quite a lot of use out of his snap electronics. My only regret with that set is the speaker! He however is having a lot of fun experimenting and both following instructions (apparently he can do that sometimes!), modifying circuits he built from the instructions and attempting his own.