We do an awesome impression of having a pretty quiet month on the homeschooling front, but what was actually going on was getting used to "in term" stuff starting up and trying to make some crazy logistics work out.  We ended up dropping swimming lessons altogether as all three kids are watersafe as far as swimming pools go (anywhere involving tides is going to have to be dealt with experience).

Gymnastics in particular got a bit insane with all three kids now doing 2x2hr sessions per week.  Fortunately they're training with half hour overlaps on the same day once a week! The coaches at gymnastics are awesome and 8yo's new coach was primed for him by both his old coach and the head coach, and I'd prepped him for a while saying he was going to have a new coach this year.  All of them were keen to start back up as they all really enjoy gymnastics but when confronted with the reality of the new coach, 8yo suddenly said he was "too tired".  We got him in there and he did all right in the end and now that they're getting used to each other he's doing a lot better.  His concentration span has also improved a lot as he went from going ratty in the last half hour to going ratty in the last 10 minutes.

12yo has been doing research into diseases (contagious and non-contagious) and peer pressure, the specific example he cited for me was why do people do things like smoke or take drugs because someone else is doing it even though intellectually they know it's a bad idea.  We had some pretty good discussions about it and I really wish he would write notes at least.  Added bonus if he actually decided to try to write an essay of his own accord but seeing as that's too much hard work just notes would make me happy at this stage.  He has also been watching the Youtube channel of an ant keeper who explains a lot about ants, and has been sharing this information with his brother and some of the other kids at gymnastics whenever they find some interesting ants (there were some huge seargent ants on one of the trees at gymnastics at one stage, and he was supplementing a doco that had a section on ants that he and 8yo were watching).  Once again we can get into some amazingly detailed verbal recounts, now all I need him to do is write it for me!

We also started doing Arabic lessons at a friend's place (though with a combination of illnesses and other stuff that keeps cropping up we've so far managed to miss more than we've been to).

We also got a step closer to finding out what we're dealing with on the 8yo front after a visit to a private paedietrician (which was expensive but public is going to take forever due to demand and the fact he's low priority because of his age), who has prescribed melatonin for sleep issues and given a referral for a child psych.  The melatonin coupled with the weighted blanket has been working wonders for sleep so far.

This month the boys built a fort in the yard with a pit trap that they had spent a couple of days digging (pretty much the entire yard is hard clay). 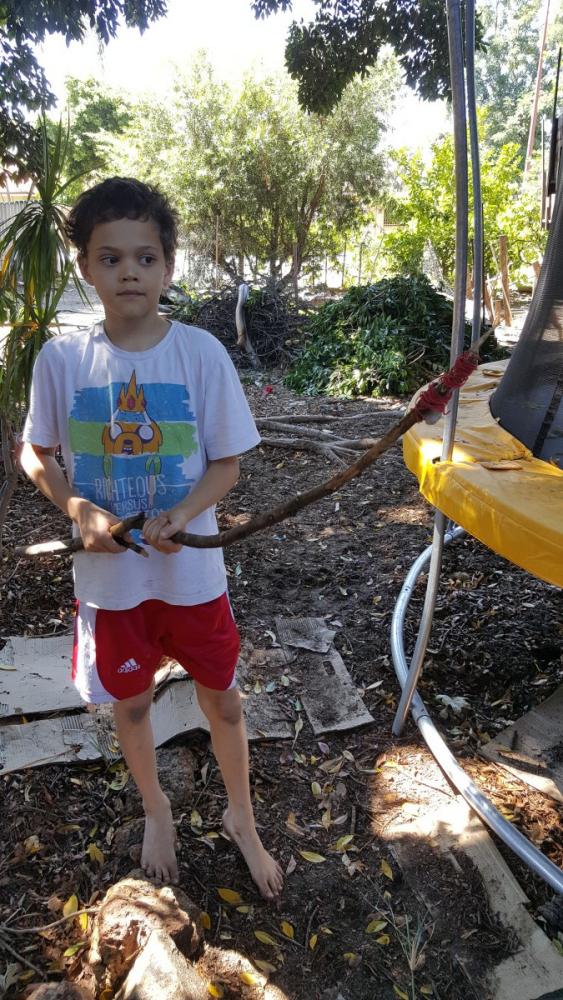 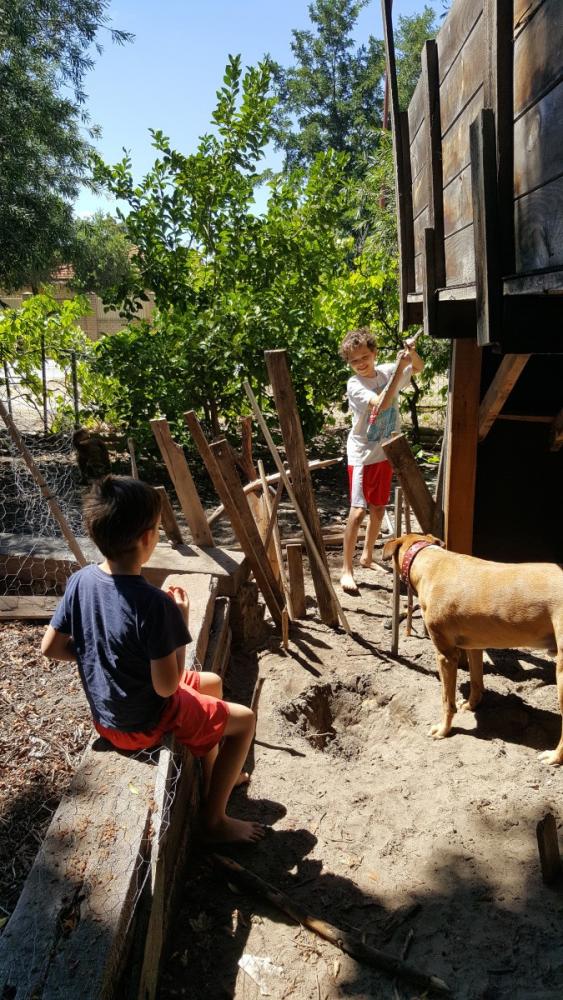 10yo drew some random *corn things possibly after drawing a unicorn.  The things were drawn from reference. 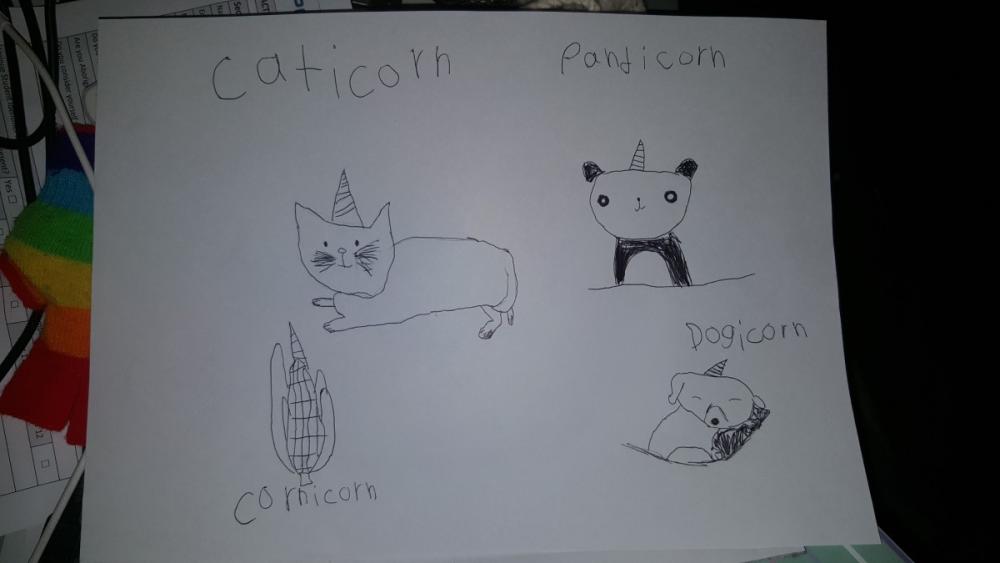 I think the cornicorn is my favourite for the sheer ridiculousness.

On one of our visits to a friend's place they were doing a kerbside collection and had thrown out many bits of pipe and joining things.  The boys grabbed some of the pipes and brought them home.  They are mostly used as weapons in imaginative play (because they have joiners they can be split into two hook swords or shorter swords or joined together into a long staff).  8yo found out that light can come through the pipes and sticky taped a torch to the bottom of one of his pipes to make his very own lightsabre. 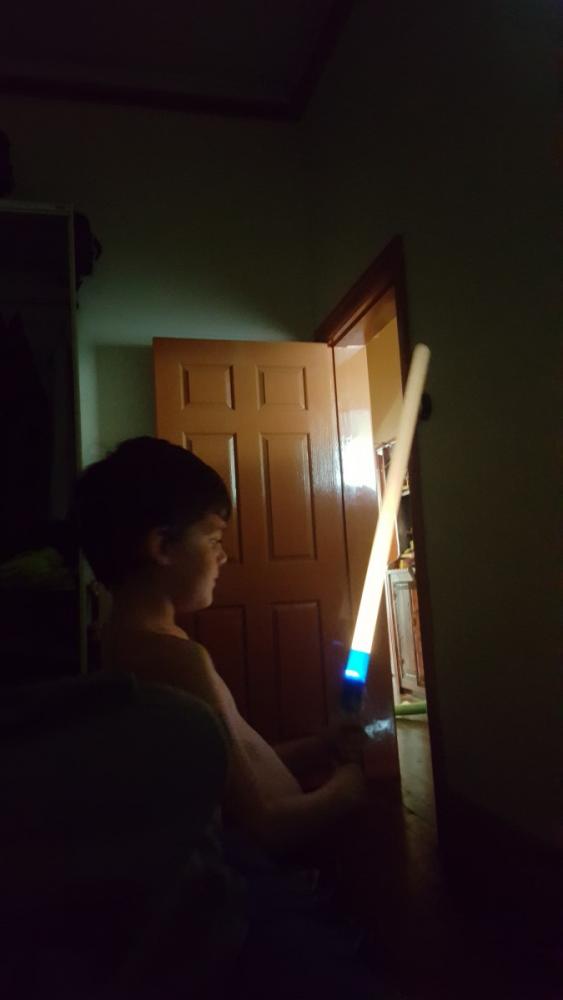 Habitica has been working out so well for all of us that 10yo made some fan art: 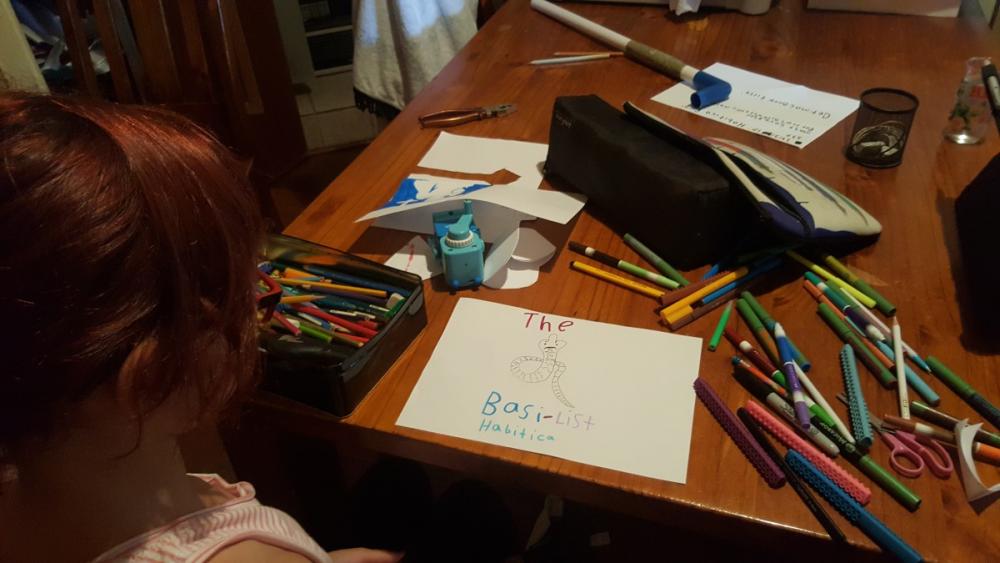 10yo keeps saying she doesn't really like science but tends to enjoy doing science experiments, so she finds ones on the internet to do.  One of the recent ones involved doing something or other with coloured water and paper. 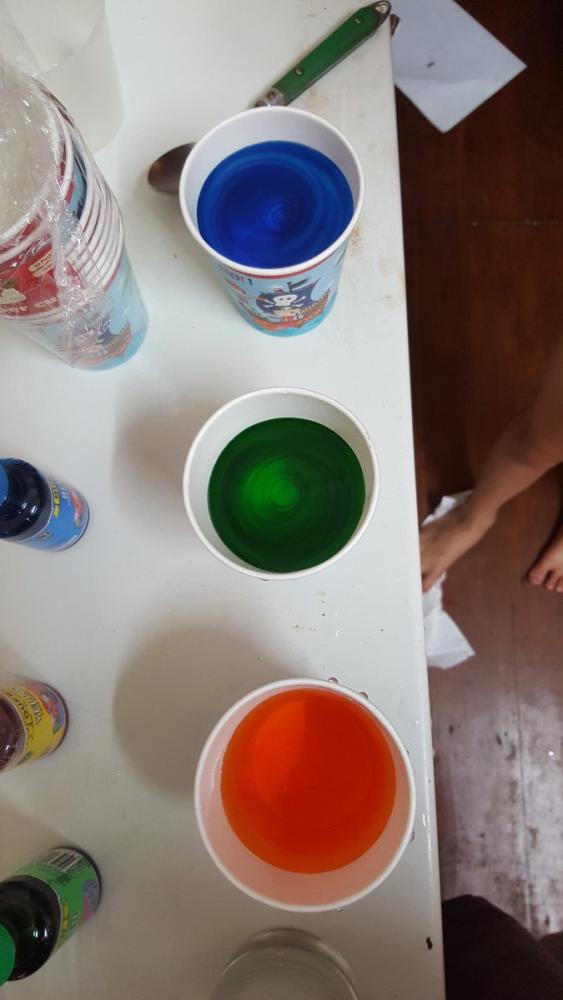 I didn't supervise so only found out that the experiment failed when she told me that she'd made "a bit of a mess" in the bathroom and was going to clean it up.  "A bit of a mess" basically involved most of the bathroom counter and floor covered in a film of coloured water.  Fortunately the bathmat took most of the damage so that got chucked in the wash and everything else wiped down.  I asked her to do a writeup for me and to let me know when she was ready so I could show her how to do a scientific report.  She decided to forge ahead without me and wrote a recount that would have been suitable for a blog post.  So will need to see if I can figure out entertaining ways to work on that. 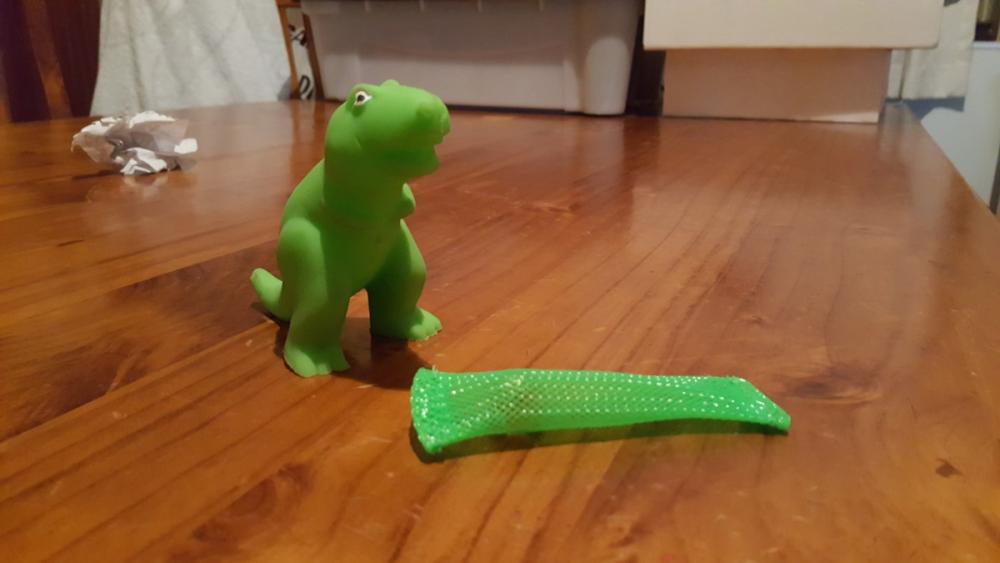 He adores his squeezysaurus.  Both items and the tiny little squishy pig that joined them a few weeks later have gotten some good use and given him something to do other than swinging around the place annoying other people in areas where he really needs to not be doing stuff like that.  Still waiting on the fidget cubes but seems they were so popular the people that made them are having trouble meeting demand and I didn't feel so inclined to get the knockoffs.

10yo made a little game/play thing involving a lot of paper dolls and props and sets.  It ended up looking a bit like one of those oldschool 2d point and click games. 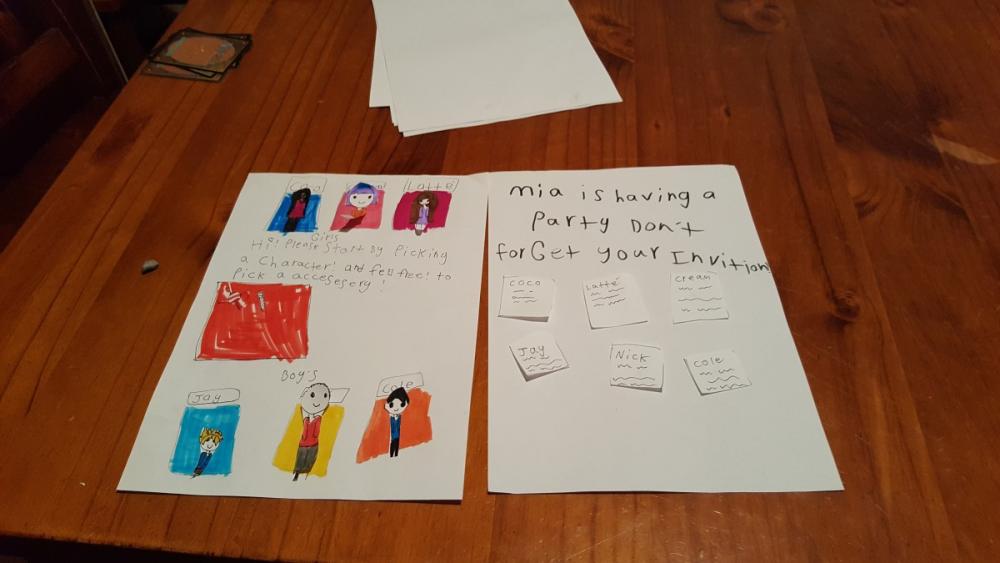 12yo's continued random knowledge involved explaining to me how some sharks are "warm blooded" (their muscles warm up their blood to make other operations more efficient or something to that effect).  On one of our rambling walks we were having a conversation about gamers and gamer culture.  Apparently despite the fact that there are a lot of girls playing games these days people are still sexist gits and he is still trying to understand why.

We also learned this month that 8yo can actually read a few more words than we thought he could.  I strongly suspect he reads like I do which is by word shape, which means phonics isn't going to help but I'll eep trying anyway just on the off-chance he's like 12yo was with blends.  He impressed his gymnastics coach by telling her "That was inspirational" after she had given them one of her little pep talks, said she hadn't heard a child that age use language like that before.  His time management skills have also gotten a lot better, I think as a result of using Habitica.  He had a bit of a bad moment this month when his guinea pig died and went into full distraction mode (hardcore gaming and not really wanting to do much or talk to anyone) and still has moments especially when reminded but otherwise seems to be going all right.

The two older kids have been trying to help their younger brother out with reading.  10yo made him some Magic themed flashcards (though they have since vanished into the æther) and both have been encouraging him to read screens and whatever else they happen to come across that he asks for help with.  I think it's helping at least a little bit even though someone usually gets frustrated or flustered and leaves before he is able to nut it out.  12yo has also been teaching 8yo some harder maths.  I really need to set up a Khan Academy account for 8yo as he is finding the Math Seeds program too easy.  It is on my never-ending basi-list of things to do!