Right at the beginning of July we went to Melbourne for 4 days to visit my 97yo grandmother.  While we were there we also went to check out the city and Mum decided that we may as well go and have our first snow experience seeing as we were there in winter, and generously paid for a private tour.

On the first day we decided to go and check out the Melbourne Museum, as the kids love museums.  The train took forever as there were a million stops and by the time we got there the kids were starving to death so the first thing we did was run off to look for food.  We ate at a lovely Italian restaurant, and then found out that we went in the opposite direction of the museum.  After a quick glance around we discovered there was a Chinese museum down the alleyway between the building the Italian restaurant was in and the next one over.  After assuring 7yo that we would not get mugged walking down this alleyway (it was quite literally a gap between two buildings, not even any room for skips or fire escapes), we walked down the alleyway into the tiny little Chinatown which seemed primarily designed to house The Chinese Museum. 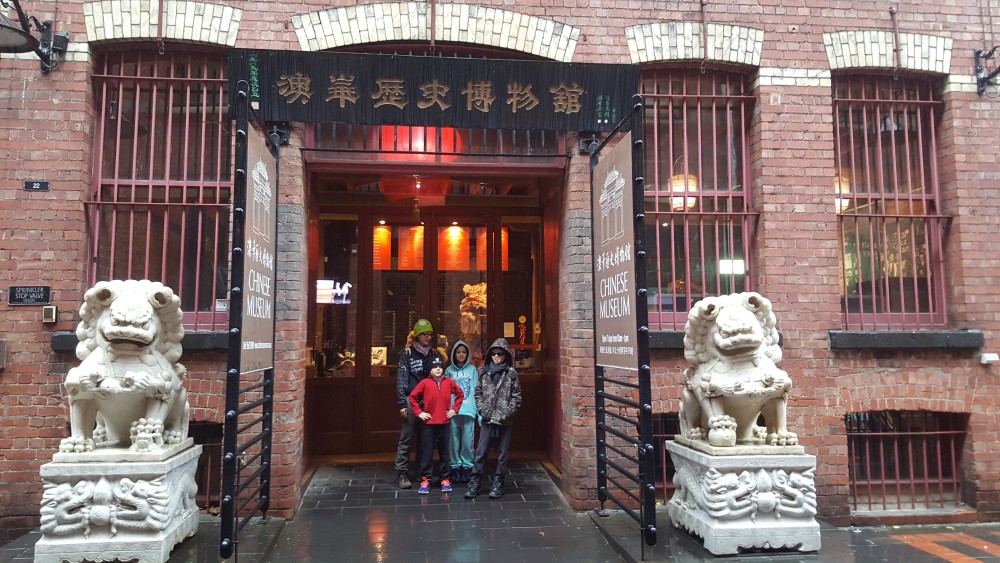 Most of the visit comprised of 9yo reading out the overview from the guide sheet we were provided with our entry fee and me wandering and occasionally scurrying after 7yo while Sprat got the easy job with the bigs. 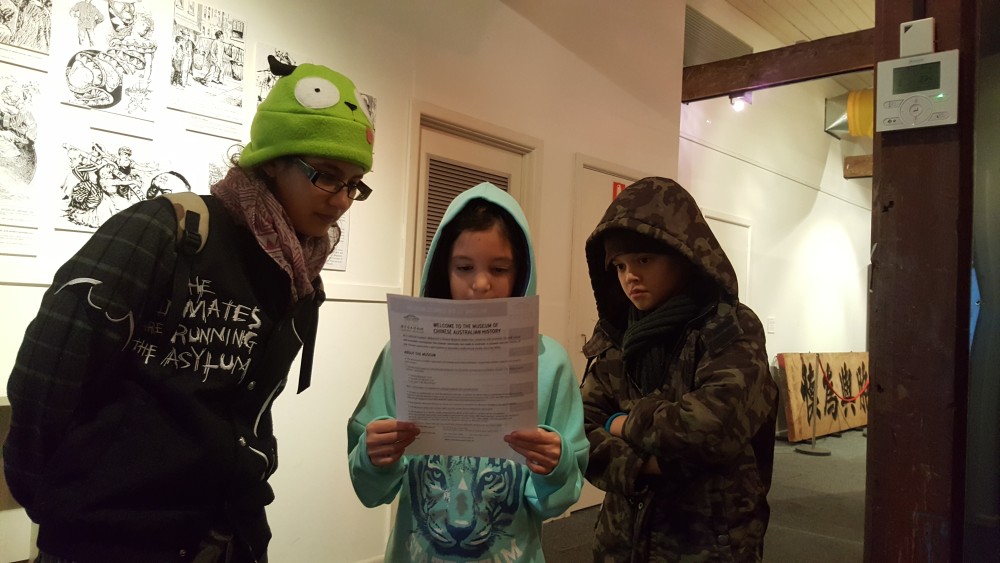 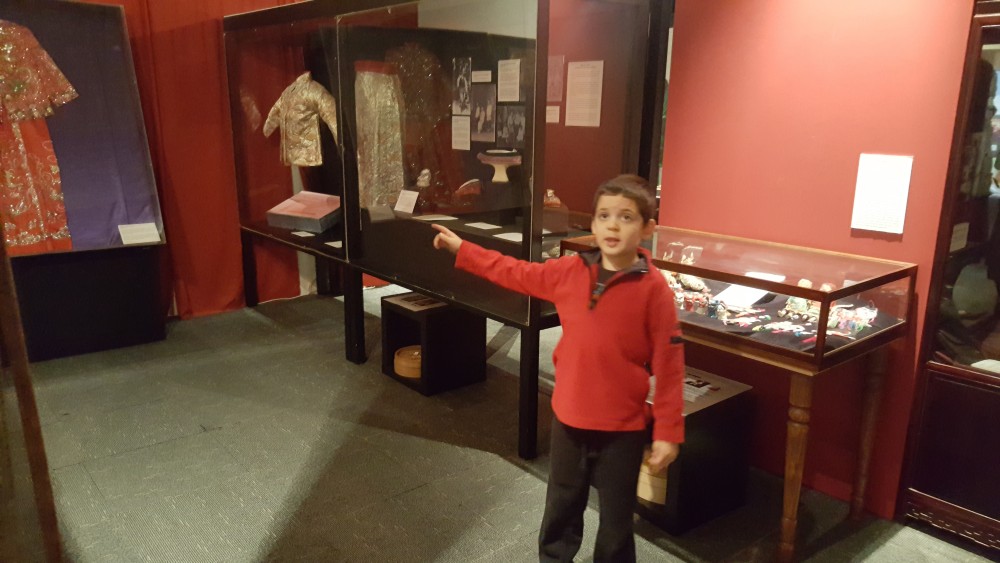 11yo was fascinated by the herbs and spent ages at the herb box.  Look, smell, feel, but don't taste apparently! 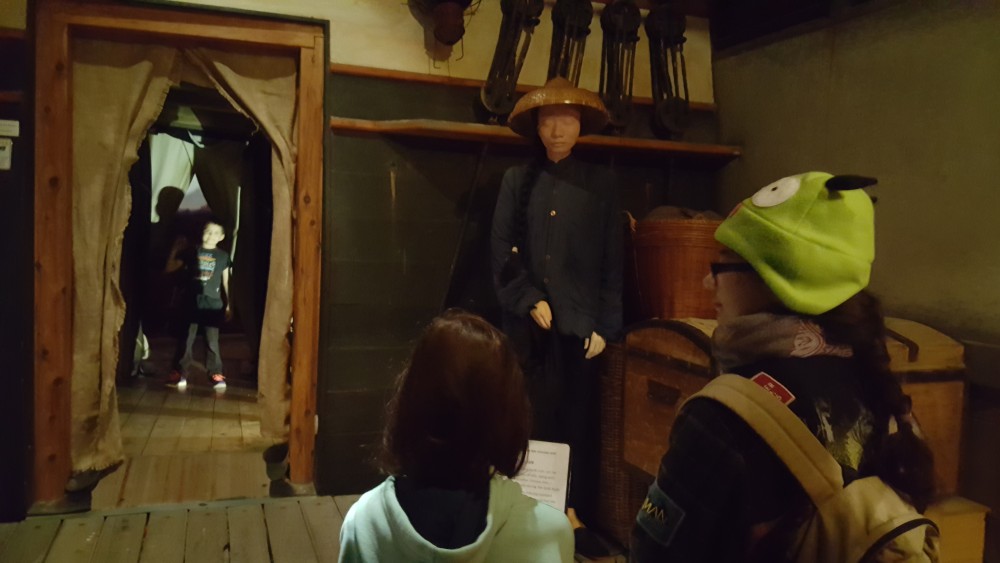 The room 7yo is standing in the above picture was done up like a ship at sea and the floor rocked a little.  The quarters were seriously cramped! All that learning apparently made the kids thirsty and we'd managed to forget water bottles, so we stopped by a food court to buy drinks.  By this stage I'd worked out which way we needed to walk to find the museum we originally wanted, and figured we could cut across this pretty looking park on the map.  Which contained some very landscaped gardens and one very impressive building. 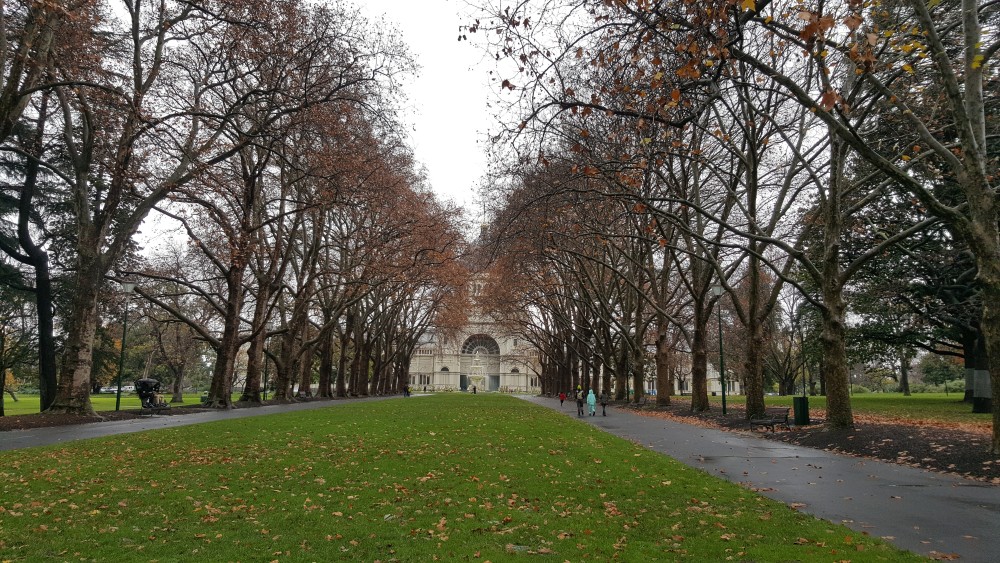 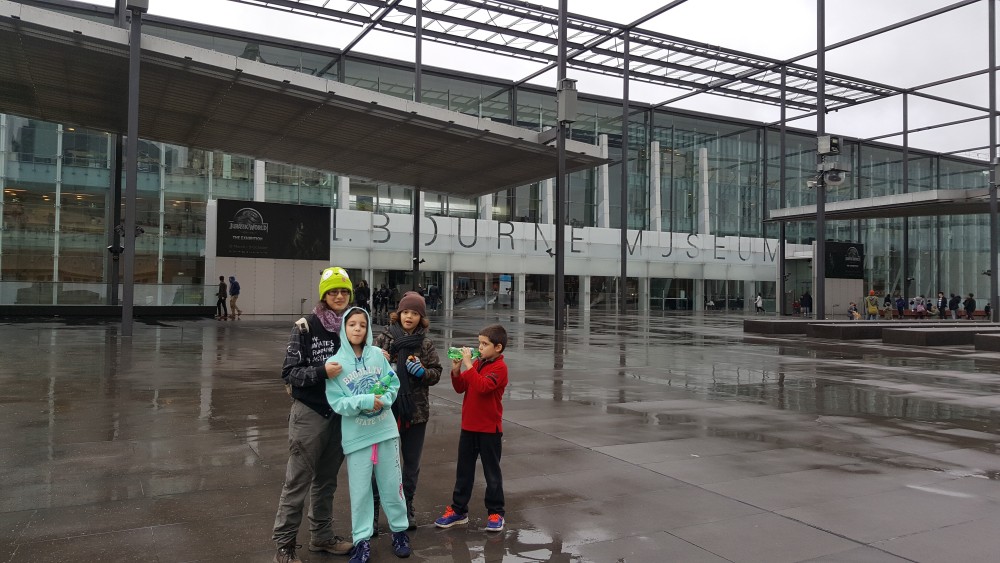 I took the group shot outside, then we went in to investigate.  After checking out the size of the building I figured there was no way we were going to be able to justify the entry fee with the amount of time we had to investigate even part of the enormous building, so we decided to come back on the day after as the following day was snow day. There was some really pretty scenery on the drive (which was about 2hrs).  Sprat said she liked the rolling hills but not so much the length of trip to get out to see them.  The kids did look at the scenery but spent a fair amount of the trip on their tablets.  Our guide commented that they were the quietest kids he'd ever had in a group (and this was including the couple of times the boys had an altercation about something or other!). Even 7yo (who doesn't usually feel cold) felt the cold up in the mountain.  The snow gear made a huge difference.  Apparently it wasn't quite cold enough to snow! The kids had lanned to go tobogganning, build a snowman and have a snowball fight, and they managed to do all of those things (except we decided to build a snow turtle instead of a snow man). 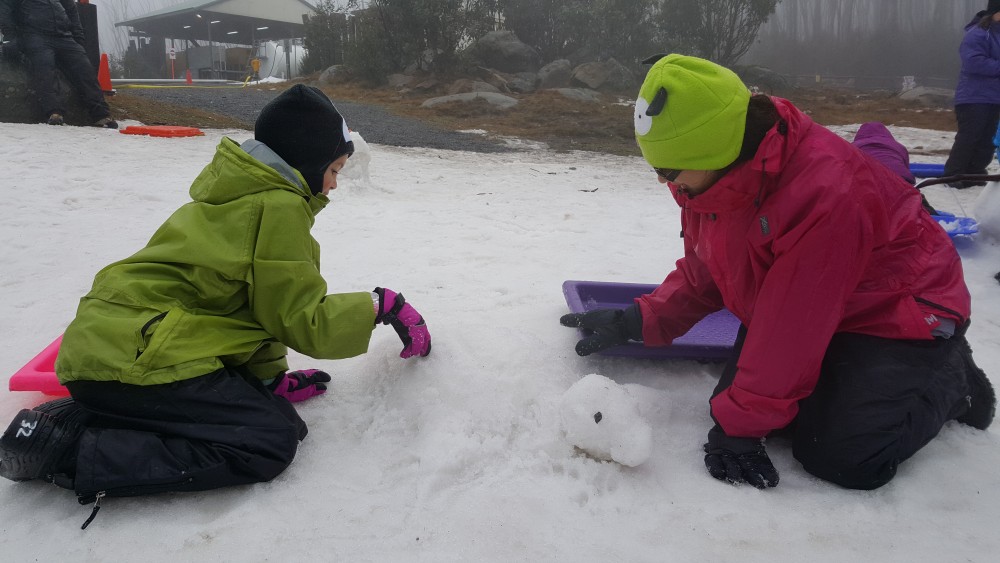 We paused for lunch and the kids were too cold and tired to want to continue snow play afterwards so we headed to a chocolate factory (which was an  optional thing if we had enough of the snow by lunch time).  The smalls fell asleep on the way to the chocolate factory, 11yo preoccupied himself with tablet games. We went to the chocolate factory where we stocked up on chocolate and the kids got ice cream (after complaining about the bitter cold after having an awesome time in the snow, crazy children, though I guess they were a bit less cold now that we were lower down).  I hadn't got a chance to investigate the plantation outside, 11yo reckoned he'd gone and checked out the signs and that they were cacao trees for the chocolate factory. We finally got to the museum on our last day in Melbourne.  The Jurassic World exhibition was on so we thought we may as well go and see it seeing as we were there, and the price for it included entry into the museum, so that was our day planned.  The animatronic dinosaurs were pretty awesome and the people who put the thing together did a fantastic job with the lighting and atmosphere (though said lighting generally wreaked havoc on my meagre photographic ability).  We had the usual problem of the bigs wanting to read the signs and watch the videos and study the dinosaurs as we went through and 7yo just wanting to check out the next cool thing.  Fortunately there was another adult handy! 7yo was of course fascinated by the giant dino dung display, which had holes to put hands in to see what it might have felt like.  The boys were gleefully examining it, meanwhile 9yo couldn't even bring herself to put her hand into the hole never mind feel the squishy stuff inside it.  She tried, and then fled. In the lab there was a dinosaur egg incubator, this shelf full of amber and the kids also had the opportunity to create their own dinosaurs.  They emailed them to themselves but I'm not sure if the emails got through as the spam filter on the mail server was being overly aggressive at the time. 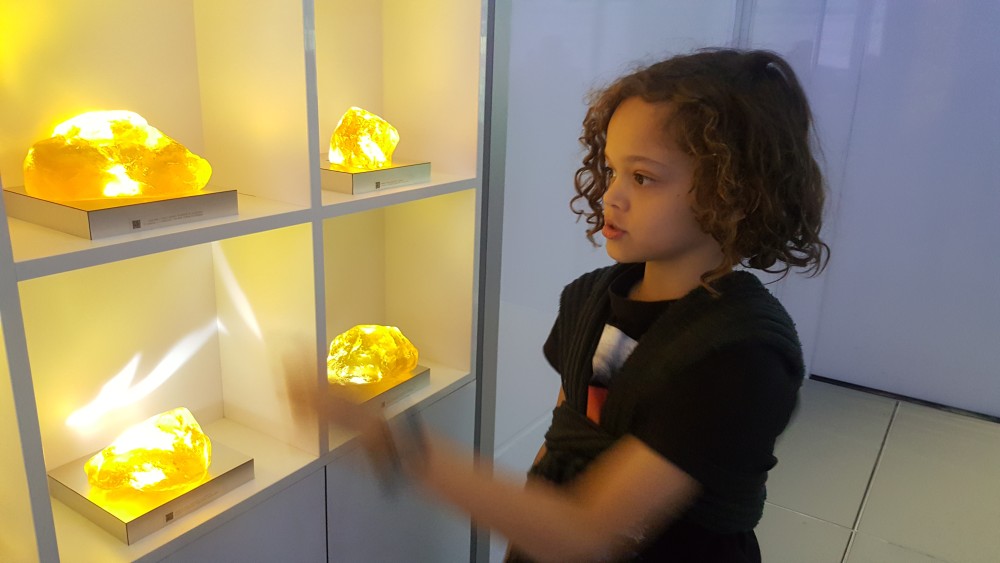 A few more animatronic dinosaurs later and we were spat out into the gift shop where we ended up buying the green screen souvenir photos that had been taken on the way in, and the kids spent their pocket money on things that caught their fancy (11yo bought himself a wallet as he needed a new one, 9yo bought herself a messenger bag as like me she's currently on the hunt for the elusive "perfect" bag, 7yo bought a roaring flashing bubble gun among other things).  There was also a "touchable fossil" on display. We then went on to check out the museum, which looks a lot bigger than the Perth one.  I don't think we even got halfway in what time we had left.

The first area we checked out was a raifnorest room we had seen when we walked in and gotten the kids food (because kids are in a permanent state of hunger) before our exhibition slot started.  It had a little cave thing where we could walk under the stream they had and see what lived in these types of streams, and a log with viewing thingies so the life inside could be examined. 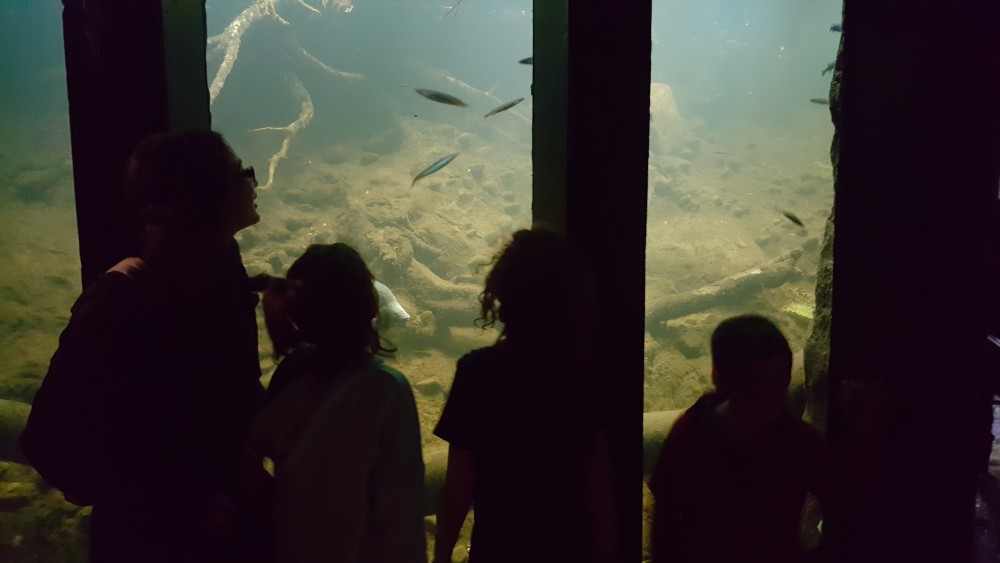 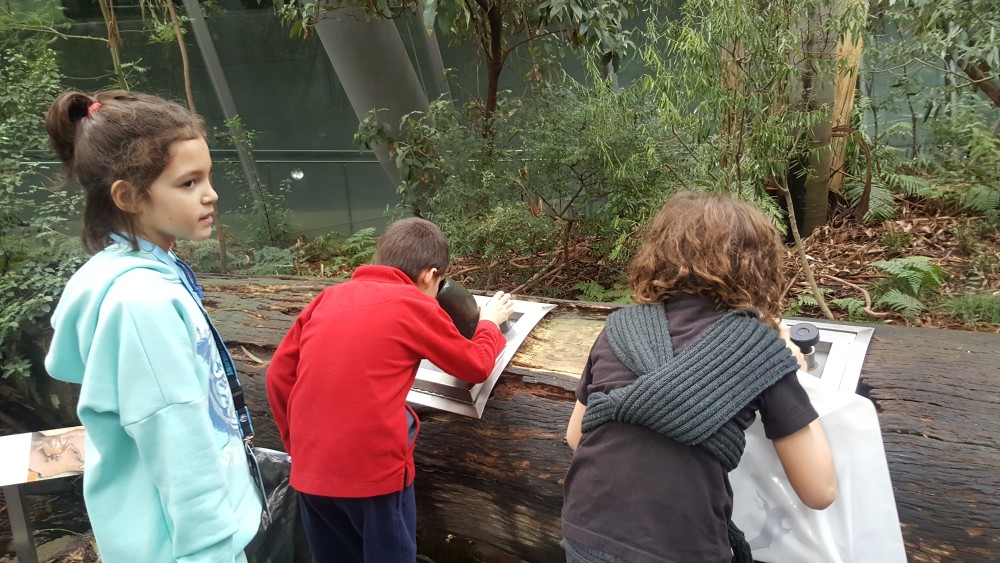 The rest of the museum was your standard exhibition spaces and curiousity cabinets. And stuff we didn't have at the Perth Museum (which is currently undergoing an epic renovation so who knows what it will have when it reopens) like dinosaur skeletons in interesting poses. 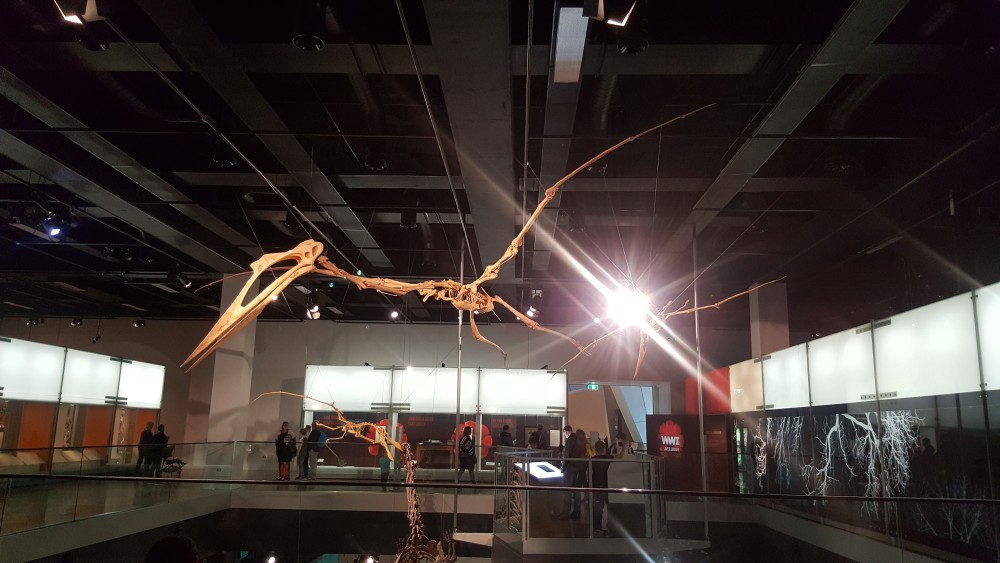 It didn't take long for Cub's impatience to see EVERYTHING without necessarily looking at it to result in us getting separated.  Cub and I blitzed through a couple of exhibitions looking at some things he found interesting before Sprat rang and told us which exhibition they'd gone into (of course it was the one on the opposite side that we'd decided to look in), by the time we got through the one she said they were in they'd moved on to the World War II gallery.  I didn't get to go in there but the kids were quite disturbed by some of the displays.  I hope whatever they saw haunts them and everyone else into avoiding wars like the pointless wastes of resources that they are.

We didn't have nearly enough time to explore the whole thing so decided to make it a priority the next time we were in Melbourne (whenever that may be) and went back to spend the last day with the extended family before heading back to Perth, where we finally got more pipecleaners so 9yo could finish her chompy case. And being all wintry and stuff, our nearby bushwalk had water in it. 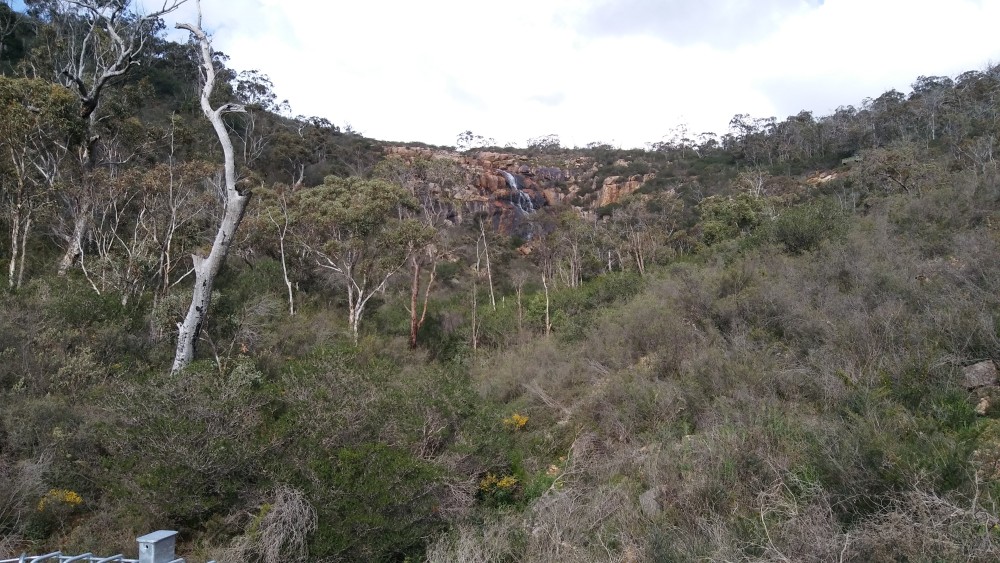