Downloading all the things

3d Coat is a proprietary product.  Ubuntu Studio ships with a version of Blender and Krita but they lag at least a version behind.  The shipped versions may well do the job (and be easier to upgrade) unless you specifically need something in a newer version or just like being on the latest version of everything.  I stashed all of these in /usr/local as that's on its own partition on the ssd.  My home directory is on a 2Tb not-ssd.  I don't know if that's "right and proper" for Linux but everything works, I know where it is and it theoretically shouldn't get hosed if Ubuntu explodes and requires a complete reinstall so I don't care.

There are instructions with installing Krita that specifically say to uninstall the previous version.  Blender versions are standalone and you can have a few of them kicking around and use whichever one of them you like.  However if you use the commandline or the alt+space thing to run the app, the packaged Blender will always be the one that runs.  To preference the downloaded/newer one add it to the path in ~/.profiles so it looks like:

Krita and 3dCoat will need .desktop files created for them so that they show up in the alt+space thing.  The reference page I used says they can go in /usr/share/applications for multiple users or ~/.local/share/applications for a single user.  I went with the latter partly because I'm the only user on my system and mostly so I wouldn't have to sudo anything (by this stage it was an extra step I didn't care about no matter how easy it is).

I have no idea where things "should" go as far as Linux is concerned.  I dropped all the scripts in /usr/local/bin.  For all the scripts remember to either sudo chmod a+x [filename] or right click -> properties -> make executable them.

The switcheroo script is based on a script I was using before that I had to modify as this time round it didn't want to work for me for whatever reason.

Assign the keys in a bash script as above.  I'll probably be continually tweaking these til I'm done (and then I'll remove this statement XD), they're here as examples as currently I want the doc up so I don't lose it).

I know I could "just alt-tab" but seeing as I can draw my way around I may as well use that if the pen happens to be in my hand.  So I want to be able to switch to already open instances by drawing instead of spawning new ones (and if I want to spawn a new one that can be done in the usual fashion).  The astute reader will have probably noticed that the commands to run all apps except Thunderbird (which helpfully does it by itself) are preceded by app-detect.  The app-detect script is a useful little thing I based off one I found on Stack Overflow (and after several logouts and restarts trying to get various things working I now can't find the damn thing!), which checks for a running instance of the app passed in, switches to it if there is one, or launches one if there isn't.

This only works out of the box for apps that happen to have executables with sensible names like firefox and blender. 3d Coat's was actually 3d-coat-64 which I probably could have worked with.  What I did to make things work for the script was make symlinks for the executables in /usr/local/bin with the names I needed for the script (krita and 3d-coat in my case).

Yay for pie menus! Pretty easy to set up.  I made one for Krita and Blender (3d Coat for whatever reason ignored commands from the pie). 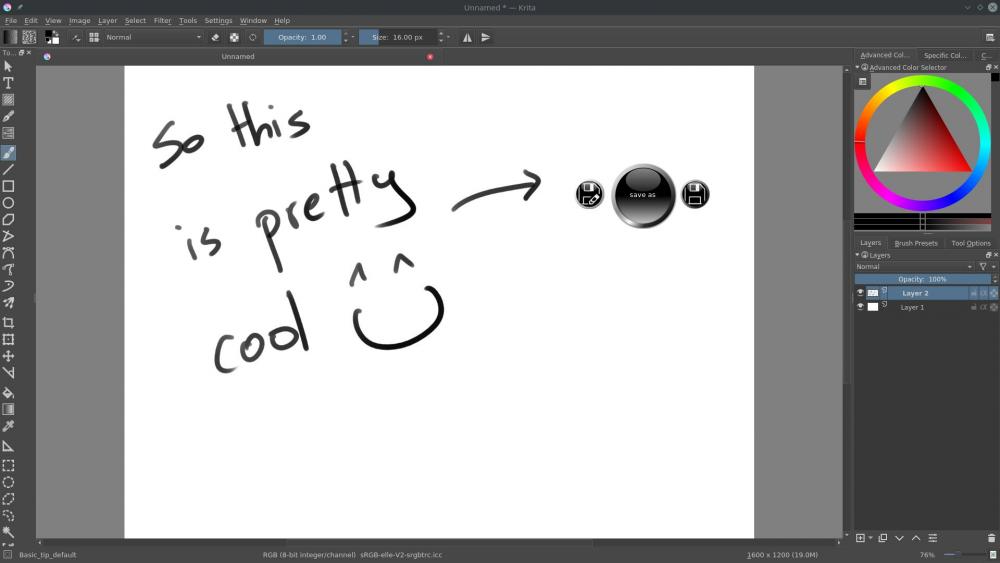 They are keyed to super+b for Blender and super+k for Krita.  Icons can be set for the pie slices (which is how the ones in the screenie got there, they don't look like that by default).  I'll probably add to them as I go and be too lazy to update the screenshot.

I really, really like the gestures in OSX, however the Cintiq doesn't work as a giant trackpad and I don't like mice.  So drawing my way around is the next best thing.  Easystroke is reasonably self-explanatory to set up.  I used ctrl as one of the triggers (press the trigger when starting the stroke, let go while doing the stroke so the keypress isn't passed on with the stroke command).  Would have preferred to use super but that was not responsive for whatever reason.  My gestures are currently as follows: 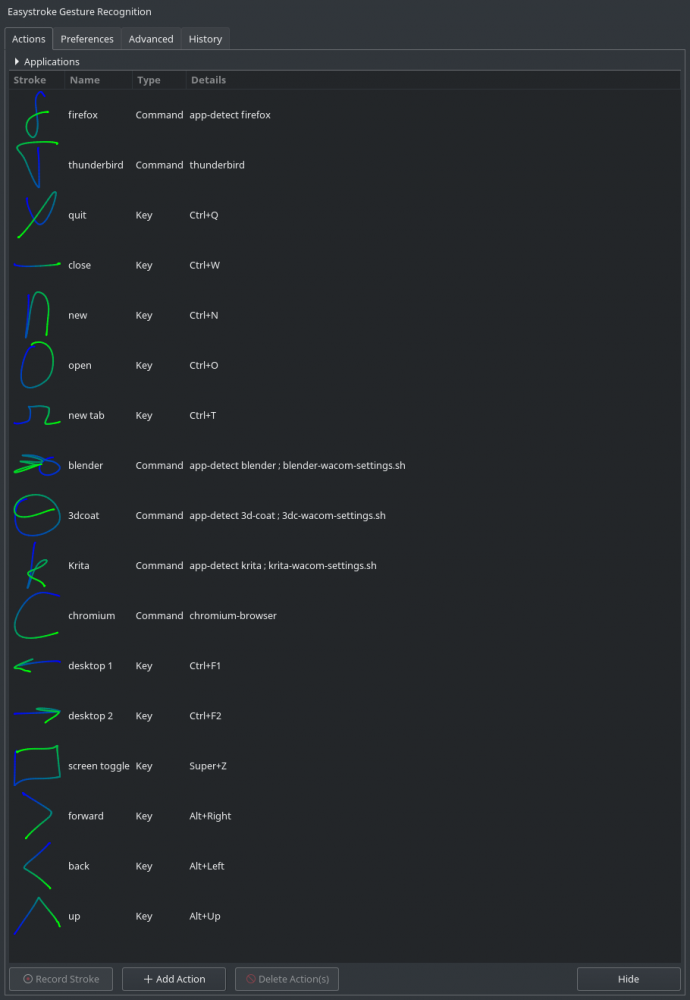 Had to modify the quit gesture to be shift+ctrl+q for Chromium and Hangouts (drop down the Applications fieldset, click Add Program/Group, then click on the application you need to do special things for and then you can modify/add gestures just for that app).  Even though the quit command is ctrl+q in Blender, the gesture won't trigger it for some reason.

Additionally, 3d Coat is a pain.  I'm not sure what it does but the tablet can't be in Mode Relative (ie acting like a mouse) while it's open, you can't draw strokes over the top of it (they glitch horribly and don't work). 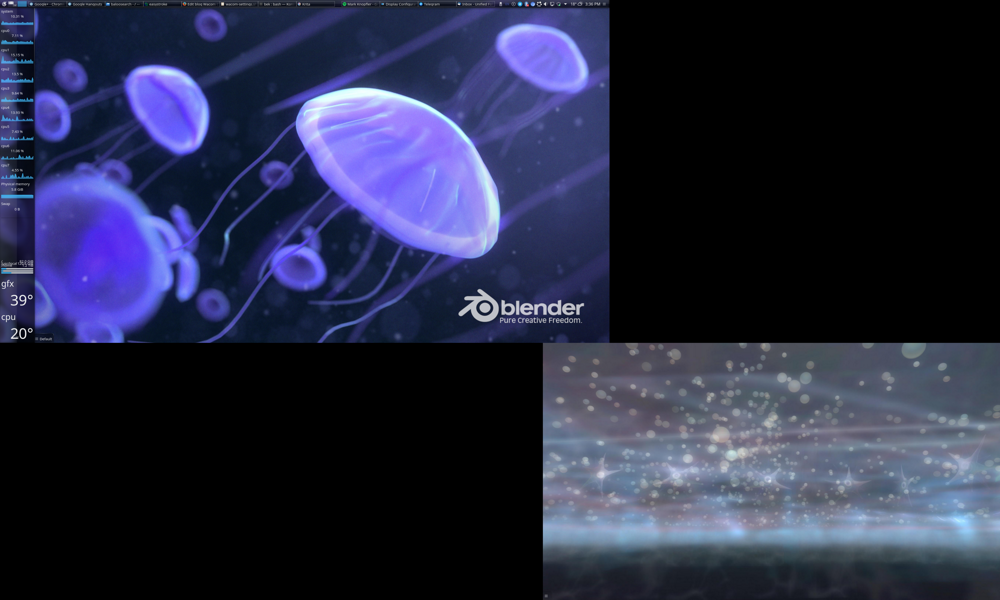 Is this better? Sorry about that, some of these old posts started acting up after I upgraded the site and I haven't had time to go through and fix them all yet :S