We took a fishing trip to Jurien but once again were not able to go out in the boat due to the howling winds.  The boys went fishing off the jetty, JJ caught a blowfish and the same seafull four times.  I caught some godrays and the kids checked out a sundial.  There wasn't enough sun to see what time the sundial thought it was, 11yo tried to take a guess based on the position of the sun while explaining how the sundial worked to 6yo. 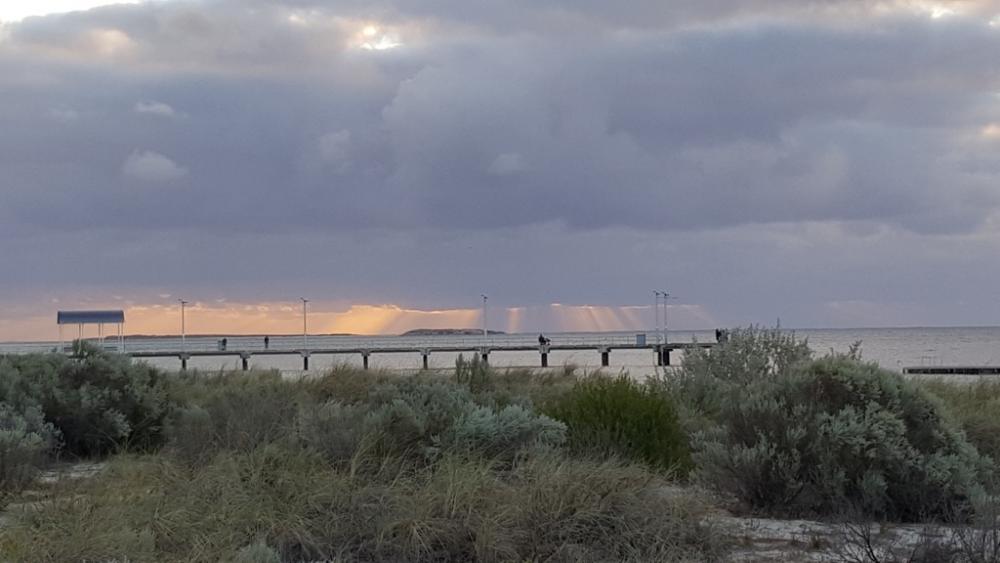 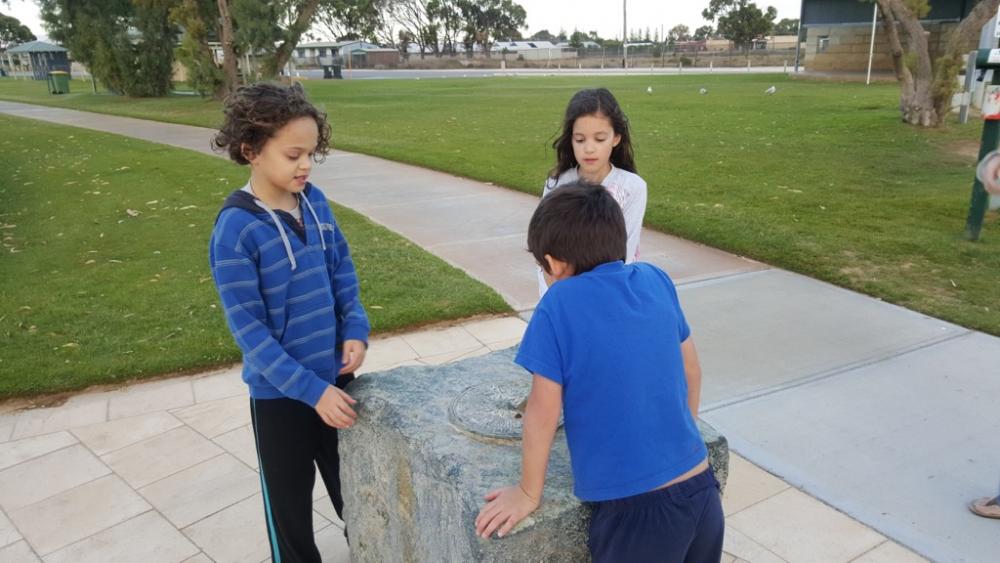 We also found this bull ant type thing which I warned the kids not to get too close to while we were oberving it as it was observing us right back and these ones charge (which is why there's no body part for comparison next to it). 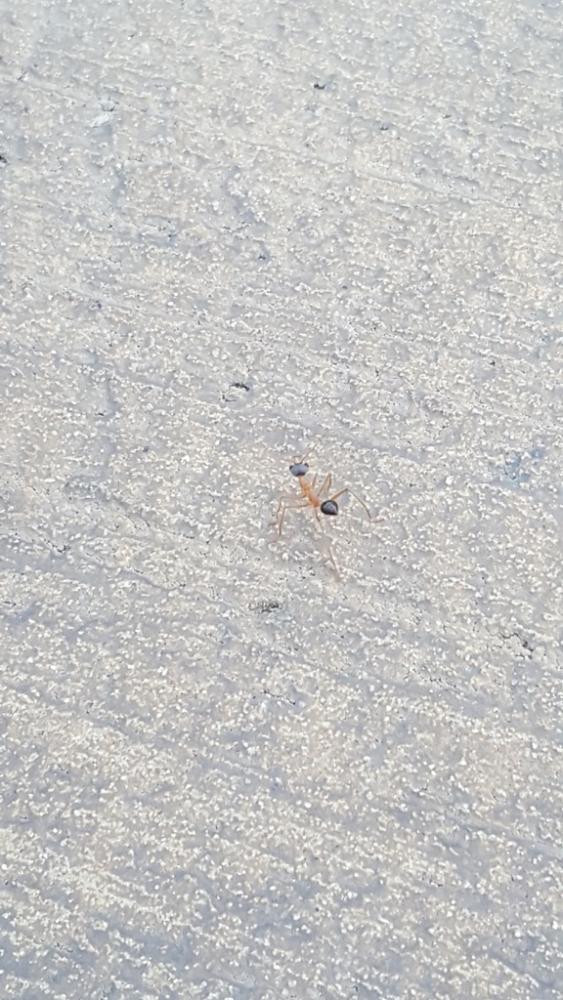 Because we couldn't go out boating due to the wind, we went on an excursion with the outlaws instead to a place called Stockyard Gully which they had apparently been to previously many moons ago when JJ was a kid.  Becaue they said "gully" I was expecting a gully.  The drive there required a proper oversized 4wd, our awd Outlander wouldn't have cut it.  The kids had a blast on the track, though there was only one major bump as father in law missed the part where the track went from decent if loose gravel to sandy and went over a bump pretty hard which jolted everyone and which the kids declared "fun".

There were some really awesome caves that we'll have to come back and explore when we have some caving gear. 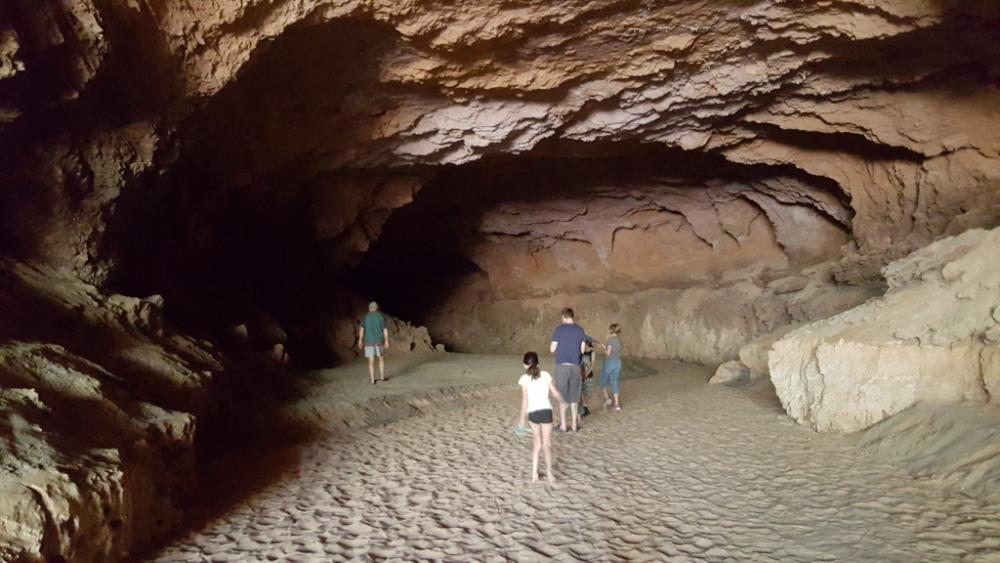 Above photo was taken a fair way inside the cave with my back to the light so was pretty impressed with how it turned out.  Not sure if it flashed or not.  We discussed how caves form and the path the winter creek takes through the cave.  Didn't see any bats in this one and didn't go too far in as being a cave it was pretty dark and I refused to brave the thing with just the torches on our phones (occ health and safety coupled with common sense strikes again).

We went to SciTech three times (twice within the same week) for SciTech lessons.  The big kids had Edison Robotics and Slime Time (JJ got some photos of the former as he went in with them, nobody got photos of the latter as I had to be out minding 6yo), 6yo had Green Eggs and Ham (which was basically a junior version of Slime Time as far as I could tell from the end result). One day we attempted to go to the Art Gallery of Western Australia with quadrapop and Chappie.  Chappie ended up being unable to make it, and I found out after getting there that the Art Gallery was suddenly open Wednesday to Monday and it was of course Tuesday.  We waited til quadrapop got there and then headed over to Perth Institute of Contemporary Arts across the way and checked out the exhibition that was going on in there.  9yo described the white rabbit as "creepy".  I didn't take any photos as I was too busy making sure 6yo didn't touch any of the exhibitions (he desperately wanted to but otherwise did a good job) or inadvertenly trip over them as he only comes in two speeds (sleeping and high octane).  They did parts of a worksheet that was on the front counter.

We repeated the attempt on Leap Day and this time got there.  We only did part of the art gallery.  11yo asked quadrapop why some really simple looking pieces of art were considered works of art, and quadrapop explained the differences between art done for whatever reasons the artist has to do them vs the art market which is where most of the money is made based on how established/popular the artist is.  11yo wandered around the rest of the gallery with this pensive look as he took that all in. 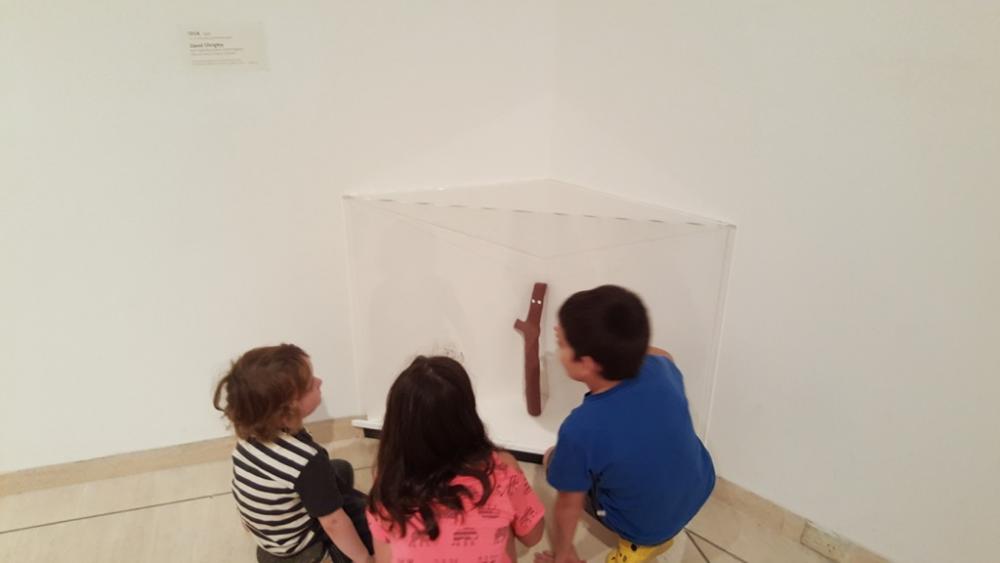 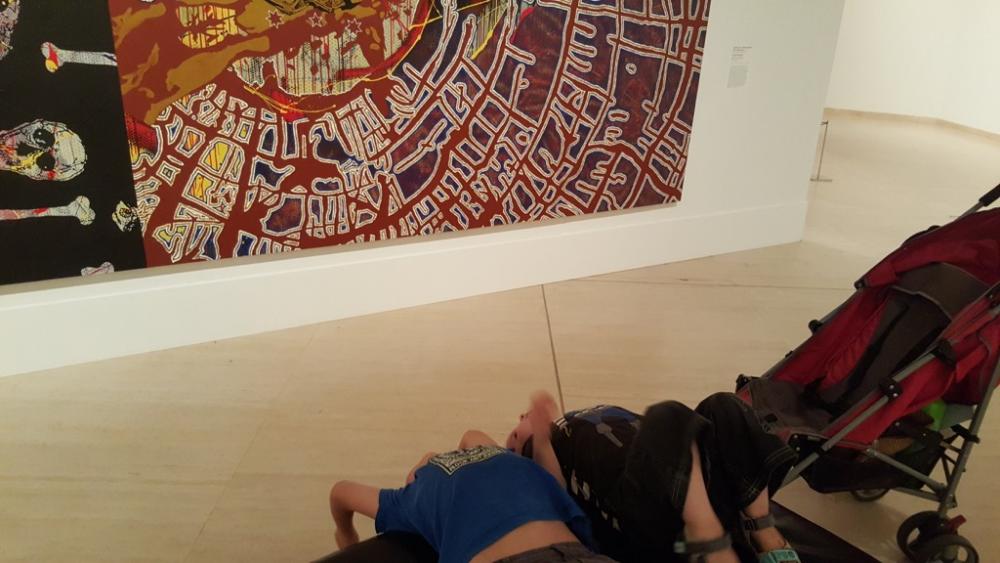 Then we went to the bit where people can draw stuff to be (temporarily) displayed.  The idea is to do try doing a still life but the kids tend to do whatever they want. 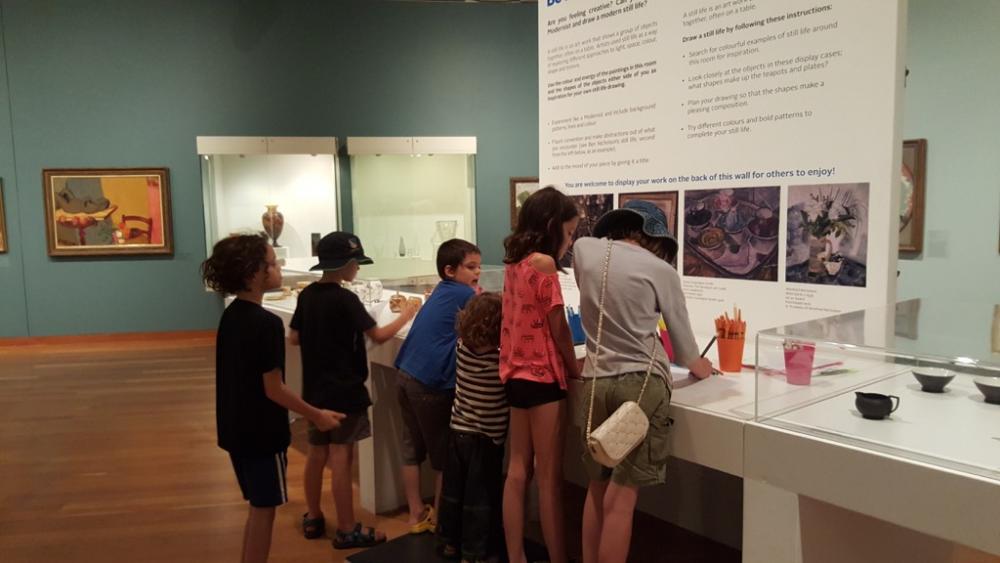 11yo drew an Aboriginal vampire (drawn from memory from a documentary he had watched previously) which he didn't end up completing there (as by the time he found a space he was happy to draw in we were leaving, and he did it twice as he got upset with his first attempt because he "can't draw" because he doesn't do it often) and chose to bring it home to put in his file. 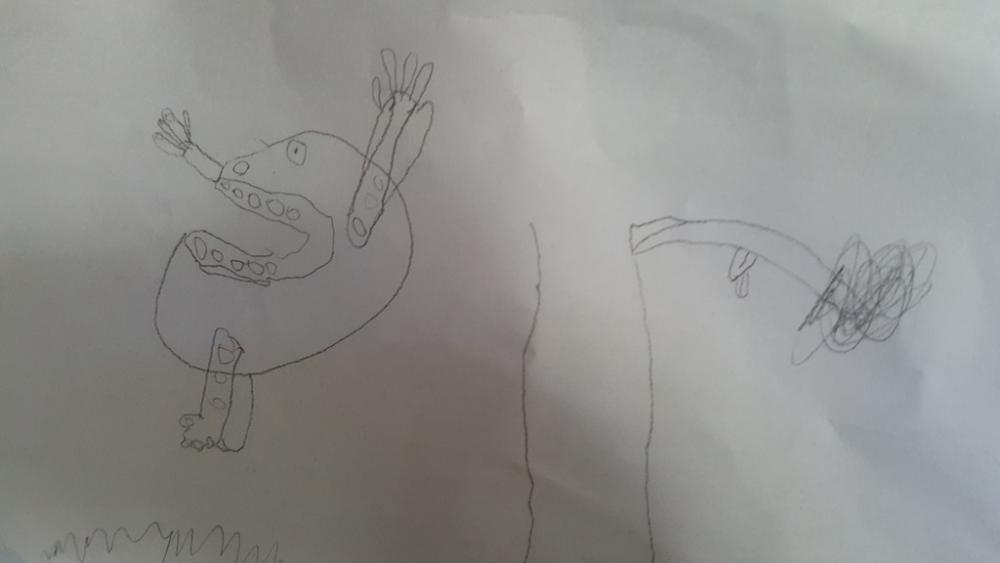 9yo collaborated with her 10yo bestie and the two of them produced a picture of a ship drawn by 10yo and coloured by 9yo.  They decided it should happen over two pieces of paper (one each). 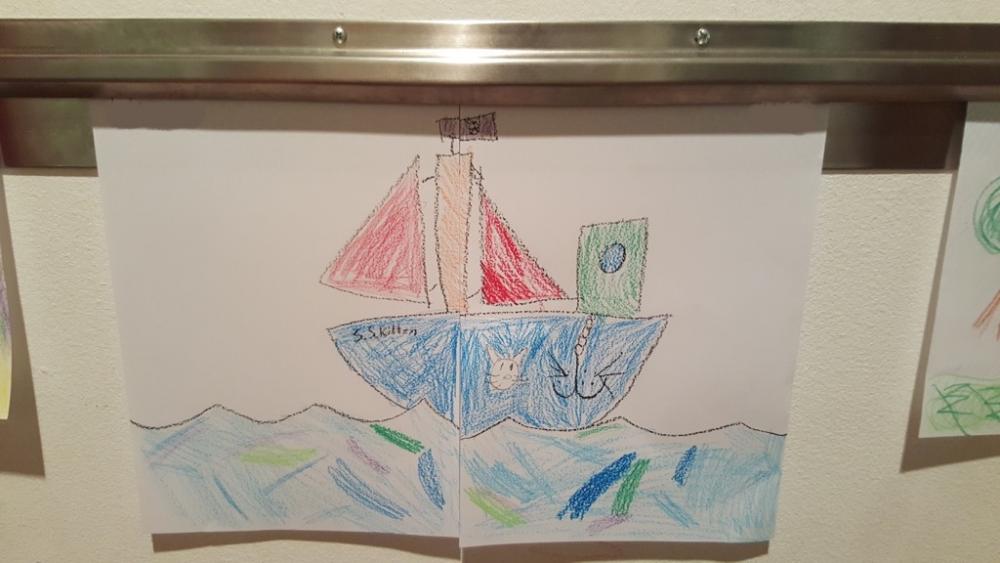 7yo produced a slightly abstract looking piece which seemed to be influenced by a few of the works we'd seen around the gallery we'd wandered through, but he was quite adamant that it was a maze. 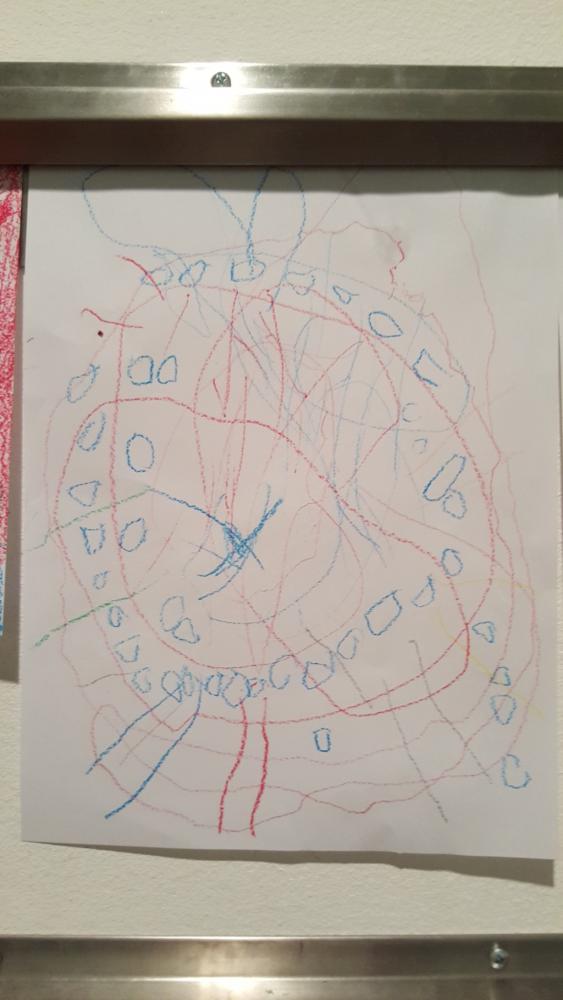