My mum and my sister are the kinds of people that like buying presents.  They like it when we come up as they go a bit nuts spoiling the grandkids rotten which makes for a nice full tree.  Every year they ask me what I want for Christmas and every year I've told them the same thing: get something from Oxfam Unwrapped or contribute some money to the bek's New Cintiq fund (my Old Faithful 12WX is getting a bit jittery in its old age, but I need a replacement sometime in the not-too-distant future).  So whenever I come home for Christmas I usually end up with a little pile of stuff.

That's all cool and this year wasn't that different, there was a little pile of stuff.  And as I usually do, I started with the small presents that were stacked on top of the biggest ones and worked my way down.  Of the last two presents, I was going to open the one with pretty owl wrapping paper first as it was both slightly closer to me and smaller than the other one, and Sprat seemed strangely interested in me opening it first, making a comment on how nice the wrapping paper was (it was really nice wrapping paper!).

The last present was the titular Gold Box.  It was a rectangular prism wrapped in gold wrapping paper with a gold ribbon which Mum had gotten quite happy with in her usual fashion. 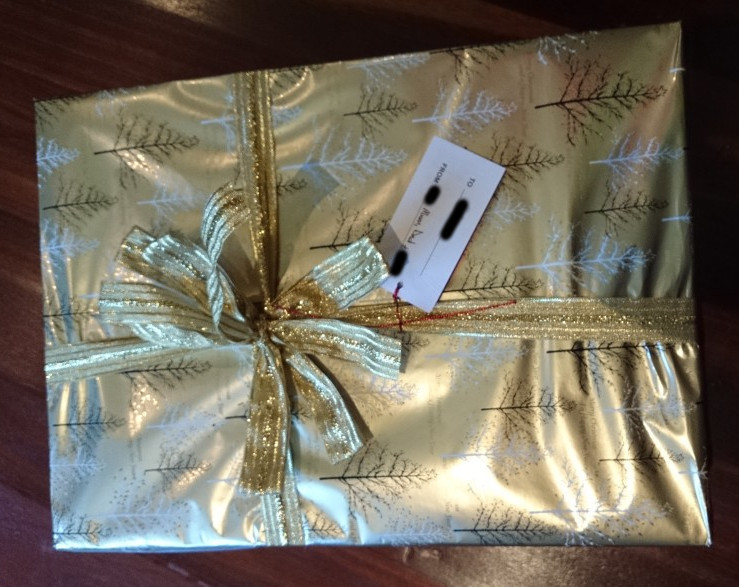 It was from "[Sprat], Mum, Dad & [JJ]" (the tokenised names are not on the tag, the former is my nickname for my sister and the latter is me contracting my husband's nym).  I found it slightly odd that JJ had been included on the card but not the kids, otherwise grouping givers like that isn't too unusual for my mum so I didn't really think too much more about it.  Dad said that it was pretty heavy so if I didn't want to bring it back to Perth with me I could leave it there.  That had me wondering what in the hell they had got me.  I was perched on the couch as I'd been taking photos of the sheer excitement that is kids unwrapping way too many presents, so bent down and picked up the thing.

It was pretty heavy.  I again wondered what in the hell they had got me, and undid Mum's ribbon with exactly no drama, teasing JJ about it the whole way as he had been stymied by the ribbon work ("It's idiot proof!") on his present.  He made some comment about tiny little fingers or chopsticks or whatever he said (this is normal in our family) as I removed the ribbon and started unwrapping the box.  The first corner I freed had the Wacom logo on it.

I'm not dead so my heart didn't stop or skip a beat but it sure felt that way.  I had the third and final WHAT IN THE HELL DID THEY GET ME thought and peeled the rest of the wrapper off the box. 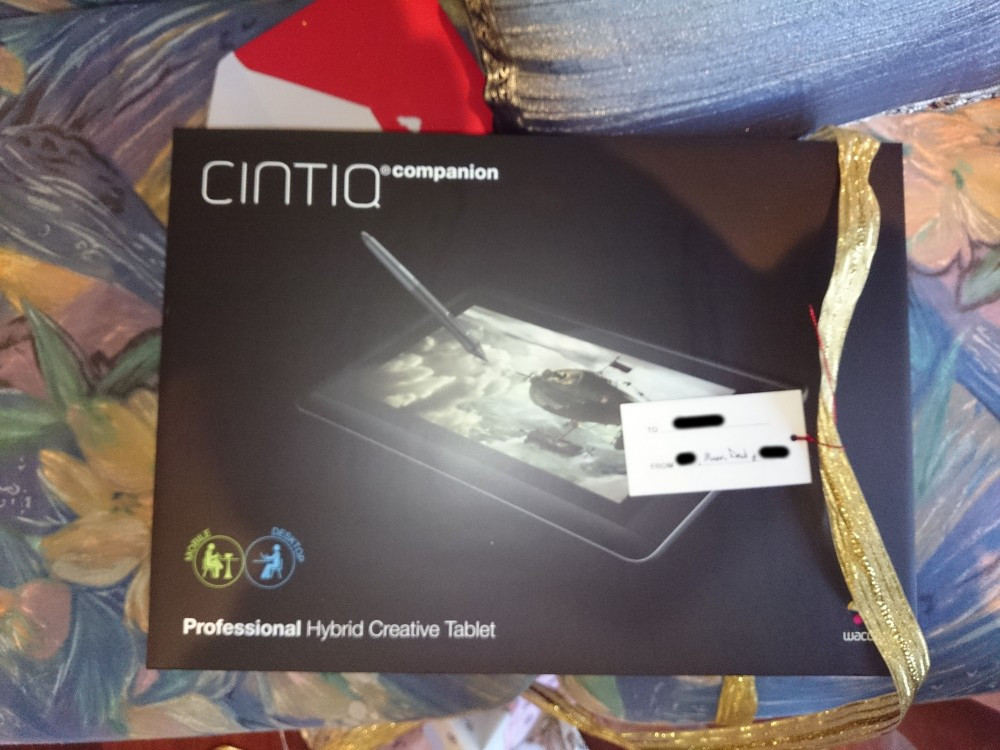 It was that tablet that I'd said on G+ was the only kind of tablet (out of all the Apple and Android and whatever else is out there now offerings) that I would ever have a use for.  That tablet that I'd been saving up for to replace my Old Faithful still usable but starting to get jittery 12WX before the Angus Saga wiped out my savings.  That tablet that Sprat had had a look at and then ranted at me about how I always want weird and stupidly expensive things, and then apparently gone and organised the funding and buying of with our parents and my husband.

I sat there staring at it for a good long while with the other adults in the room revelling in their triumph and teasing me about how if I didn't like it I could leave it for Sprat, and Dad asked if it was the right one, to which Sprat retorted OF COURSE IT'S THE RIGHT ONE.  Sprat told me to stop crying and I said I was only crying internally because I was so happy.  JJ was looking smug as he'd been teasing me earlier in the week about "angling for a new one" when I'd accidentally and unusually dropping my 12WX after shifting in an unaccustomed fashion on the chair I'm using in Sprat's room, and had also forgotten that he had sent money to Sprat labelled "bek's present" when he decided he was going to use my laptop by proxy to check his bank balance, however lucky for them we didn't end up scrolling down that far.

Sprat also gleefully informed me that I had been at our aunty's place when it was delivered (Aunty had rung Sprat to tell her the package had arrived and then also mentioned that I was there, Sprat had demanded what I was doing there, Aunty replied it's the day I always visit her and our grandmother, Sprat got confirmation that it was in another box and I hadn't seen it), and I had actually seen the box it had been in (a non-descript brown box which I'd incorrectly assumed was a present for one of the kids) and not only that I had brought it back to the island in a box of other presents and candy as part of my luggage.

She describes it as the second biggest heist best thing she has ever done in her entire life (the first is still surprising the parents for their 60th, but that one would be pretty hard to beat).  She was so pleased with herself that she blogged about it (actually she entertainingly blogged about all of Christmas Eve and Christmas Day but it's included as her "CROWNING MOMENT OF GLORY").

After the post-present-opening cleanup I retreated to Sprat's room and tried to document an unboxing but I was still a bit spun out so the documenting didn't go that well.

First and most amusingly, there was an unboxing instruction sheet. 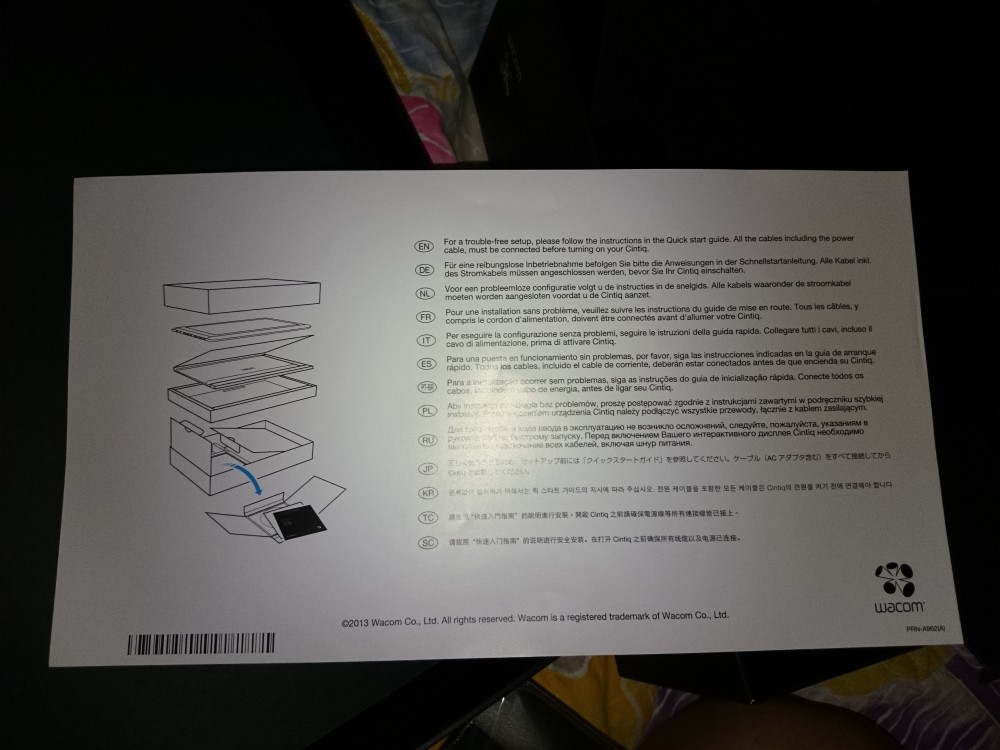 I glanced at the diagram, laughed, put it on the cover of the box and started mining through the stack.  At the very top was the tablet itself with all its lovely new tablet smell. 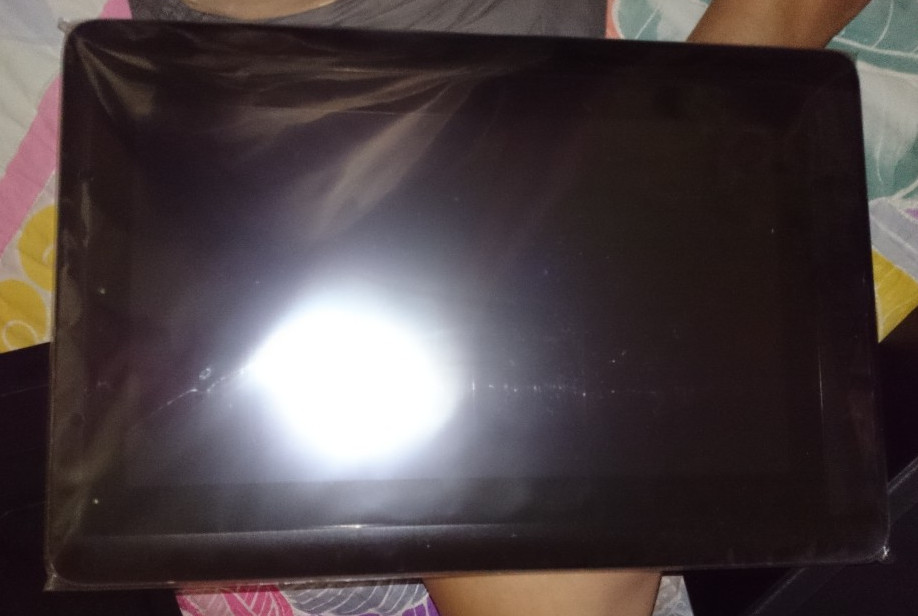 Directly under it, the tablet stand which I have decided will live on my desk when we get back to Perth as I tend to just use the tablet on my lap here. 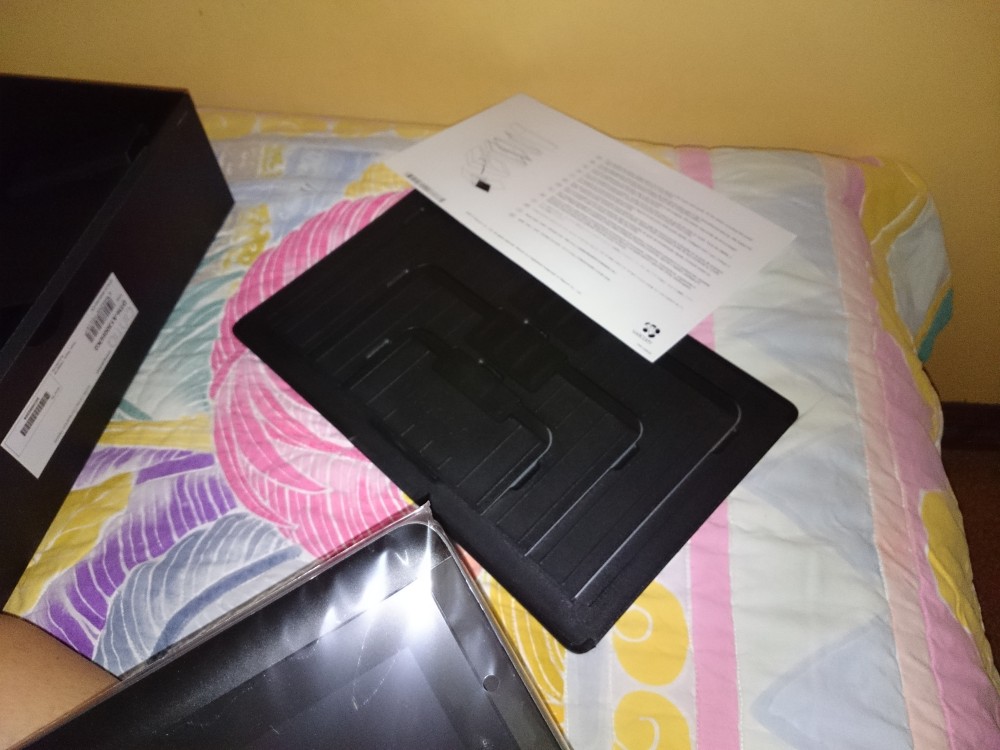 The next piece of box was thick enough that I knew there was something in it but it took me a while to work out that it opened at one end rather than peeling apart like the rest did.  Inside was a rather nice leather and something really, really nice and soft and fluffy carry case that closed magnetically.  Normally I don't bother using any carry cases or covers provided with gadgets as they tend to be crap, but this was an exception and I will probably be using it as there is a compartment for all the pieces (including a keyboard which I don't have yet).

The last layer contained the user manual, the warranty piece of paper, the case with the pen, spare nibs, and ring tool, the cables and (a really nice touch I thought) four plug heads so the thing could be used probabl in any given country. 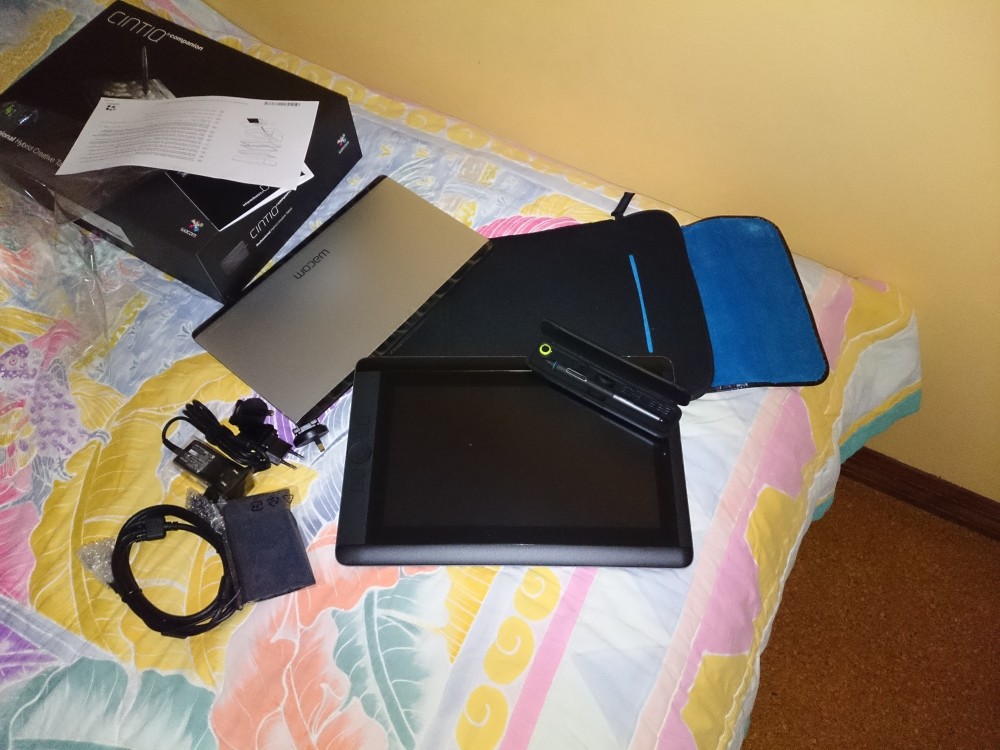 The plugs didn't take long to work out and before long I had it hooked up.  Not having a brick was really cool, and thankfully it worked mostly out of the box when I attached it to the nixtop.  Still had to write a bit of a script to do the setup (similar process to doing the 12WX only switching the stylus buttons with the gui actually worked) and snaffled a screen switching script (should have done that one before!).  Still getting used to the rocker ring and the different placement of the expresskeys as my muscle memory is still using the 12WX expresskeys (which means I keep missing the new buttons!) and looking forward to being back on my big rig so that things like radial menu and per app setup will actually work.  As is, what I have is fine for Blender and Krita which is all I'll be using it for on my laptop (though depending on how the Mac version of LibreOffice goes I may end up having to use the nixtop for LibreOffice stuff as well as Krita as Mac LibreOffice is seriously crashy when I open the 200+ page table but it's been pretty rock solid on the nixtop, oddly Blender works better for me on the Mac, it occasionally randomly crashes on the nixtop, haven't worked out the rhyme and reason behind why yet).

I showed Dad how when I connected the tablet it became a Cintiq 13HD aka another screen for my laptop that I could draw on, and when I disconnected it, it turned into an Android tablet.  I think it was like magic to him.

And because things weren't magical enough already, Sprat made a comment about how she hadn't gotten me the keyboard as well because it was an extra $35 or so (hey I was cool with that, I can get one myself later, I'm planning on acquisitoning a Logitech Multi-Device keyboard) and she had been going to just get the 16Gb tablet because she was "miserly" and Mum had said it was "only" (only? ONLY?!) a few hundred dollars more to get the 32Gb one and I was like "YOU GOT ME THE BIG ONE?!" In all the excitement of getting the tablet and also because I'd been aiming at the 16Gb tablet I hadn't even realised that I'd received a 32Gb one.

I spent what felt like the next few hours randomly hyperventilating much to everyone's amusement.

I haven't finished setting up the Android part of the tablet yet, seeing if I can stay up til midnight when the internet is free to download Orbot, Disconnect Search and Secure Wireless, and maybe whatever sculpting app I can find.  There may also be an apk of Blender kicking around somewhere.  Be nice if there was an Android version, I could really work anywhere then.  After that I should probably figure out how to transfer files from the Android part of the tablet to the laptop, though I've currently dumped that in the "maybe later" basket as I'm having way too much fun playing with the new toy.

Yeh my family is awesome. 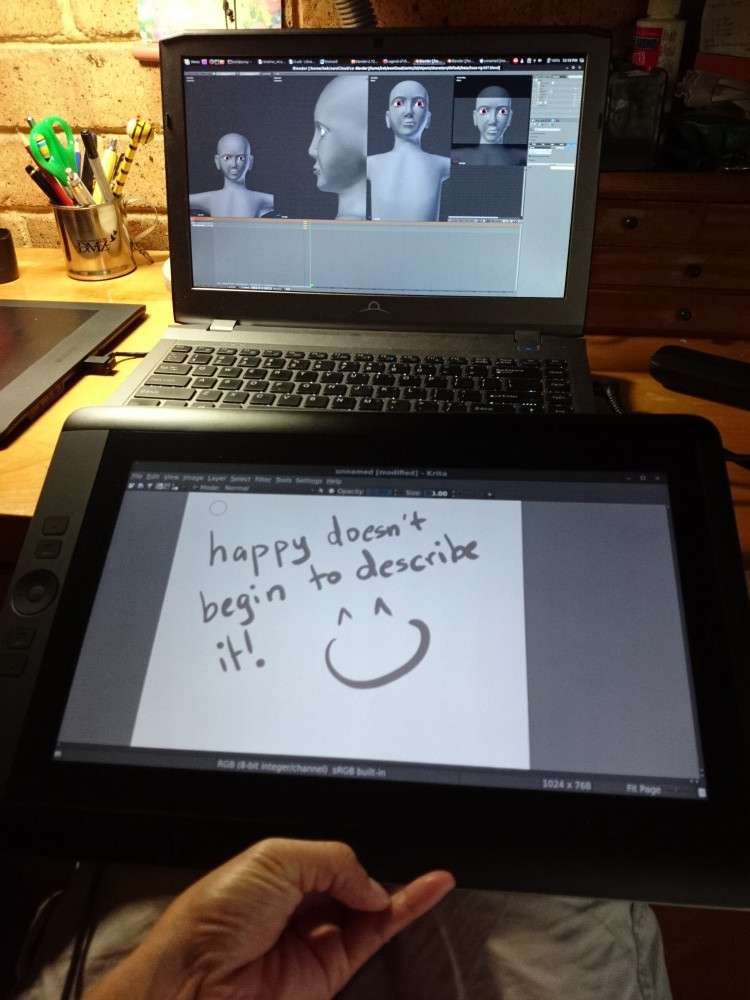 If I can stay up late some night I may do some blogging about the rest of the holiday but seeing as my Christmas Island holidays all tend to be more or less the same (we go swimming and hiking through the jungle and catching up with people) I'm more likely to do a massive photopost again when I get back.

Marry Atkins Thursday, 26 November 2020 @ 2:20pm [Permalink]
Wow this is great holiday gift idea for my son :) Thank you for sharing this great article and your experience and feelings about the tablet
bek Saturday, 5 December 2020 @ 5:12pm [Permalink]

It's a very expensive present! But if he's into digital art he will really appreciate it.  I don't think these ones in particular are made anymore but there are plenty of other screen tablets.