Unexpected family history and a keyboard

Recently we were at a nephew's 3rd birthday party.  Seeing as we were in the area we followed JJ's parents back to their place as his dad had said he had a straight razor belonging to his grandfather that JJ might be interested in (seeing as he's recently gotten into shaving with straight razors). 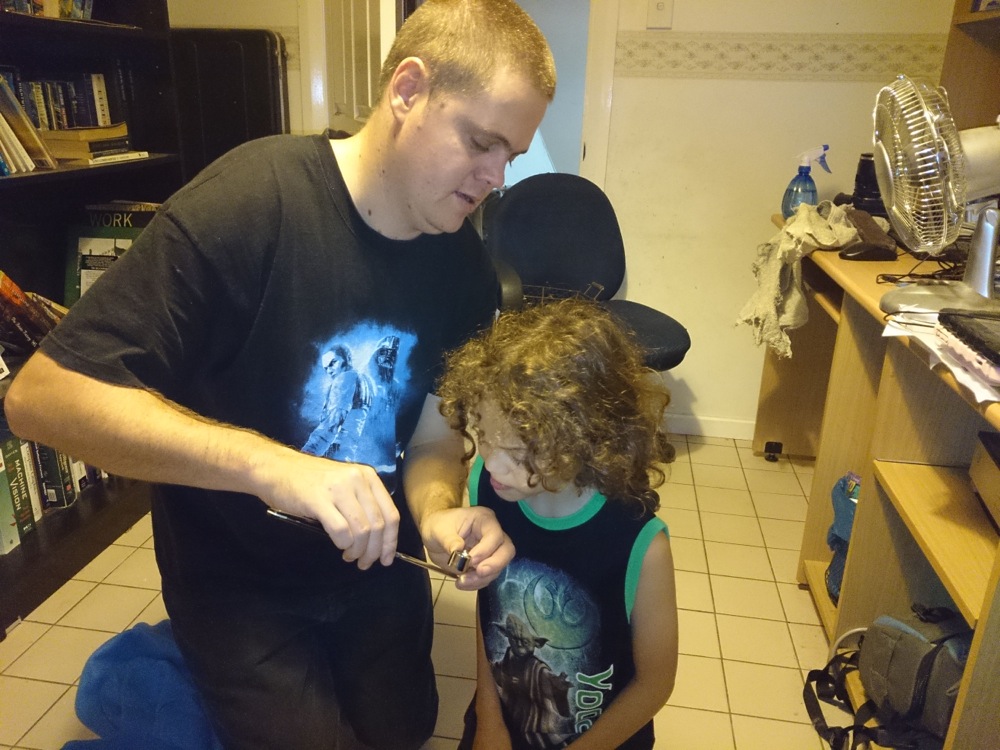 JJ showing 9yo how to examine razor's edges.  Or something.

JJ was intending to take the straight razor and clean it up and return it, but FIL said he could keep it and use it but he would be upset if JJ lost it.  The razor had lived inside a briefcase of JJ's great grandfather's stuff. 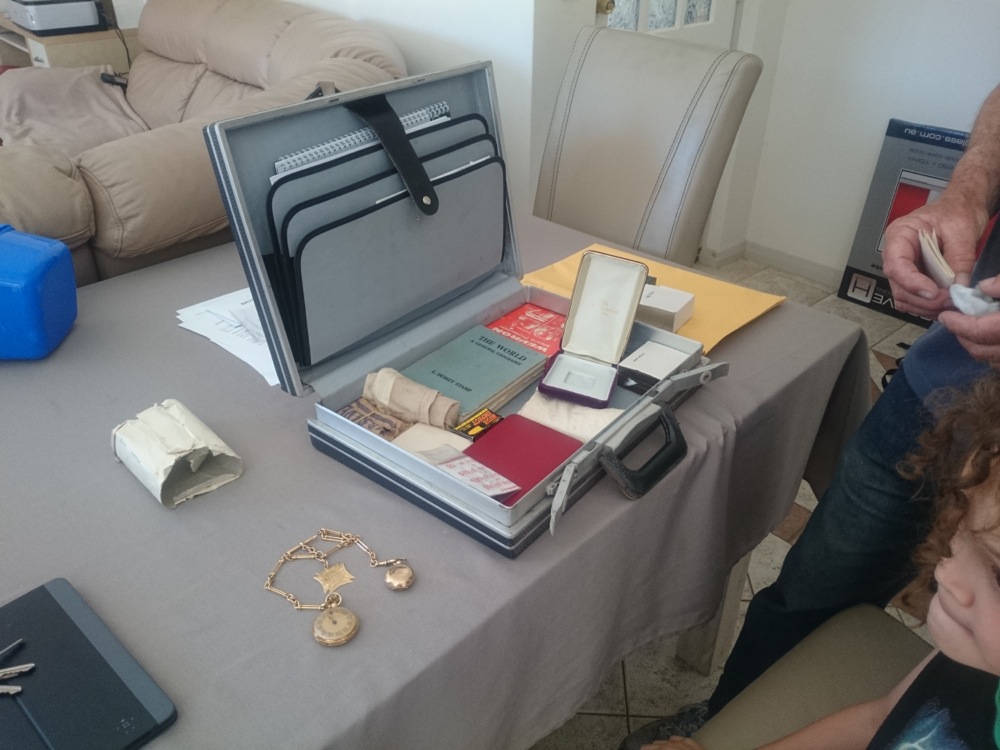 Briefcase of items that had belonged to JJ's great grandfather

The geography book contained small notes from around the world that the great grandfather had been collecting while he was travelling around in the armed forces during one of the wars.  The book itself was seriously old and was starting to fall apart.  Pop handled it with care and I mentioned it might be in need or some TLC and possibly repairs.  It lives in the briefcase and only comes out on special occasions so as long as the briefcase is stored carefully it should be all right. 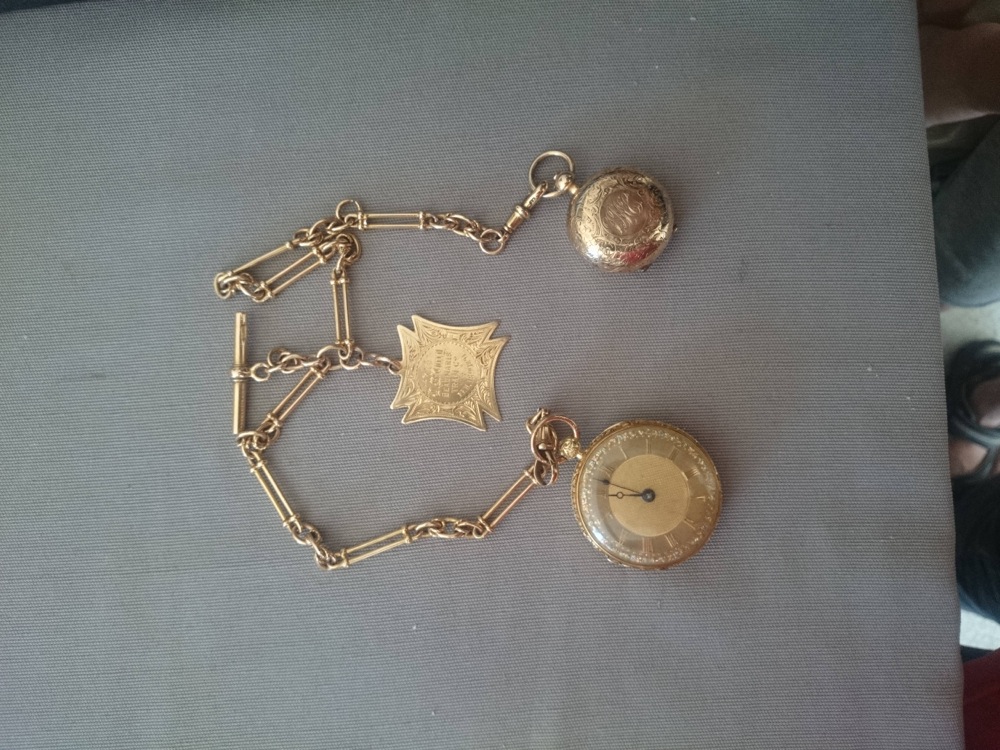 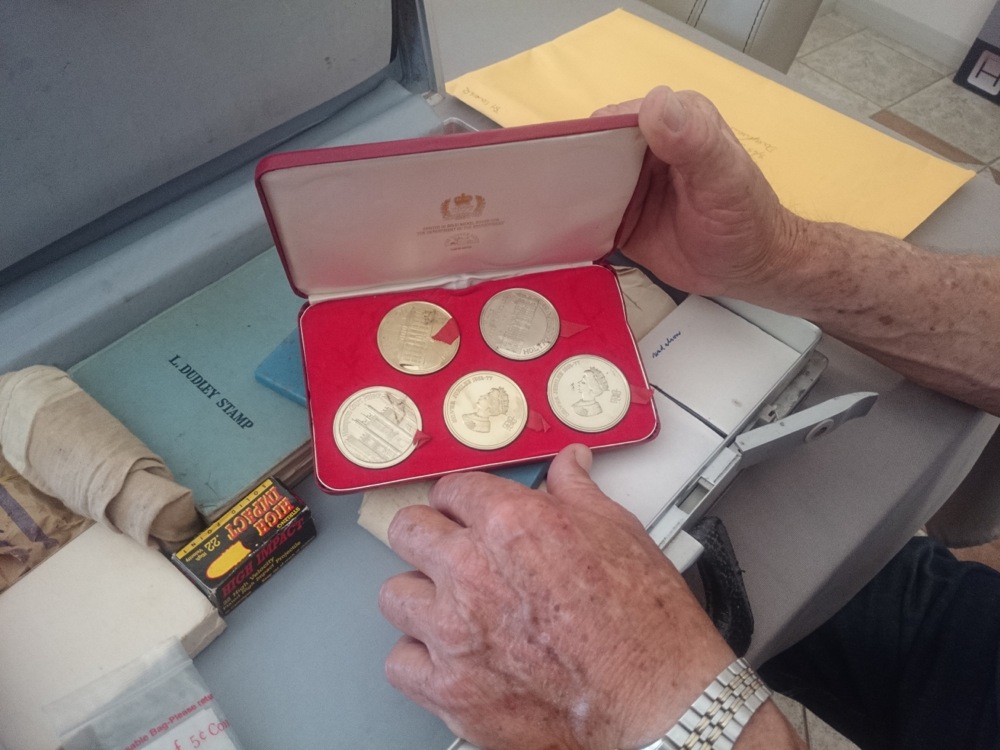 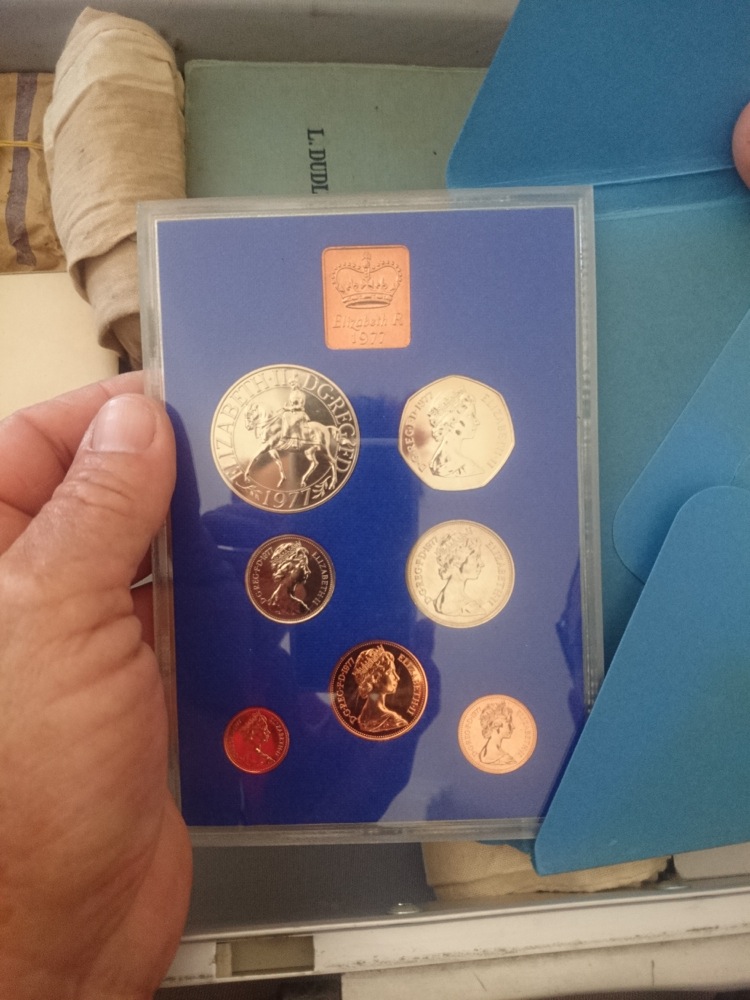 Not whether the coins were Pop's or Great Grandfather's.  In laws apparently used to have more but they sold all the ones that were worth anything worthwhile before moving.  Seeing as we were looking at old stuff, Nanna brought out some stuff that usually lives in the back of the cupboard and was only easily at hand because they're currently renovating their kitchen and had to move a pile of stuff anyway, like this case of records: 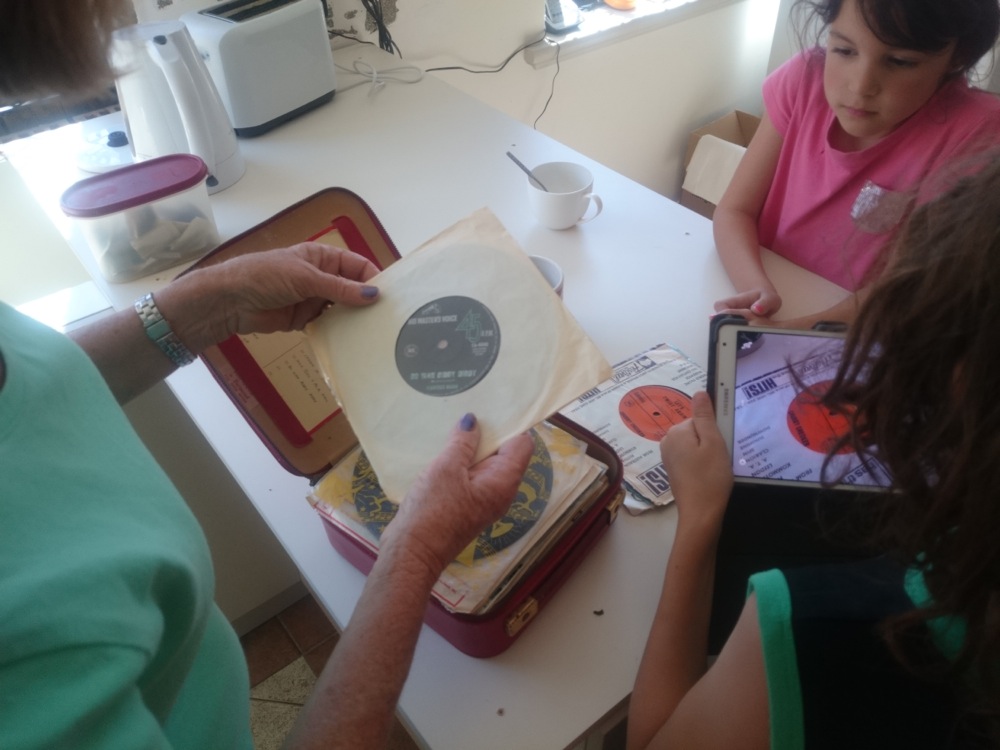 I told Nanna that you could get digital record players these days that would play them and she said she'd heard that but hadn't seen any.  Another fun thing she had was a "petrol iron" in its original box. 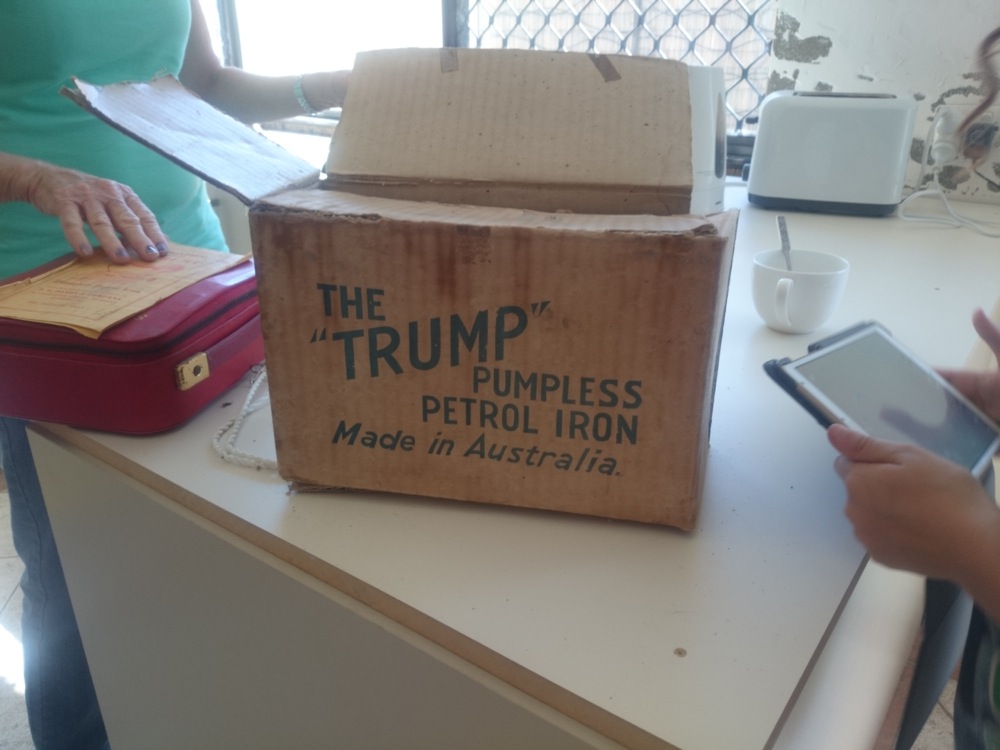 Petrol iron in its original box 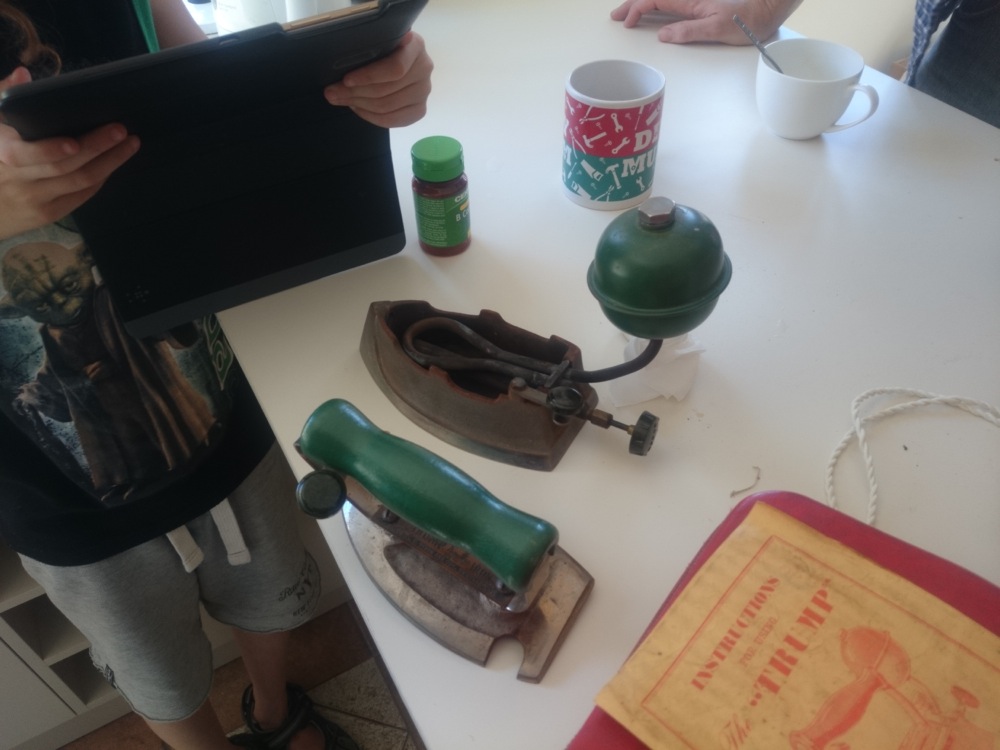 Nanna couldn't seem to quite remember how the thing went together, but that's okay I wanted to take a photo of the insides anyway.  It also came with the original instruction manual

And seeing as we were on this big family history kick and the kids were getting a lot out of it (the bigs started photographing things with their tablets while they were being told about various items), Pop brought out Great Grandfather's dress sword that JJ has dibs on inheriting: 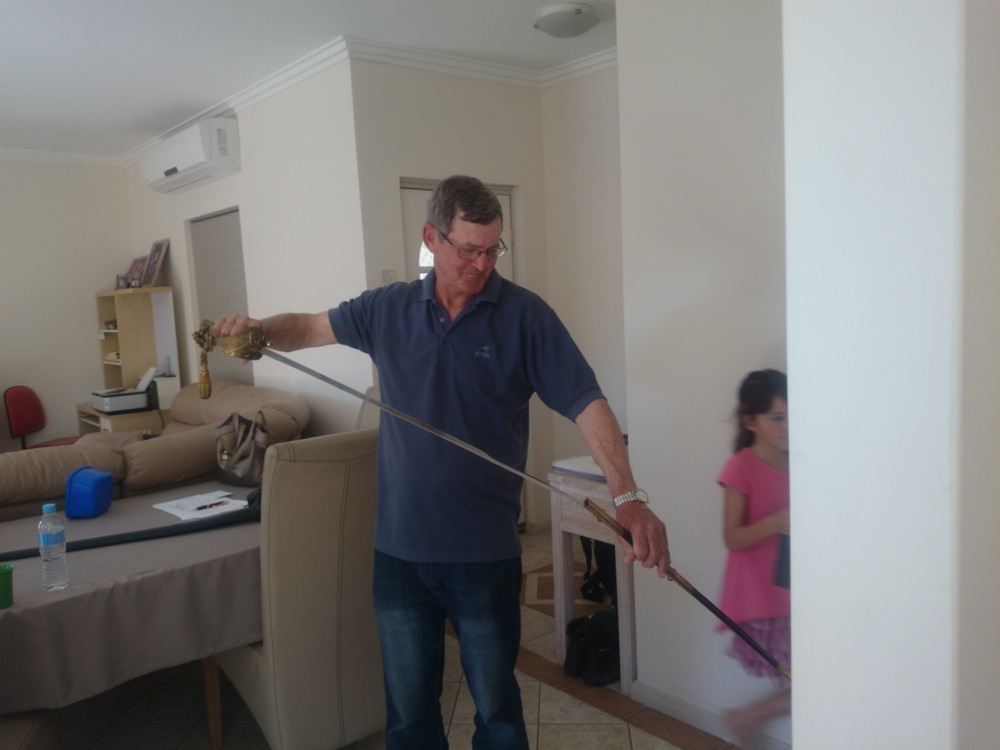 The kids have also finally started piano lessons (aka I finally managed to get around to finding a music teacher) which of course meant we had to acquisition a keyboard.  We found both the piano teacher and the keyboard on Gumtree and picked up the keyboard on the way home after spending the morning in Fremantle.  I forgot to find a music shop to see if I could find the book the piano teacher recommended, but it was a public holiday today so a lot of places were shut. 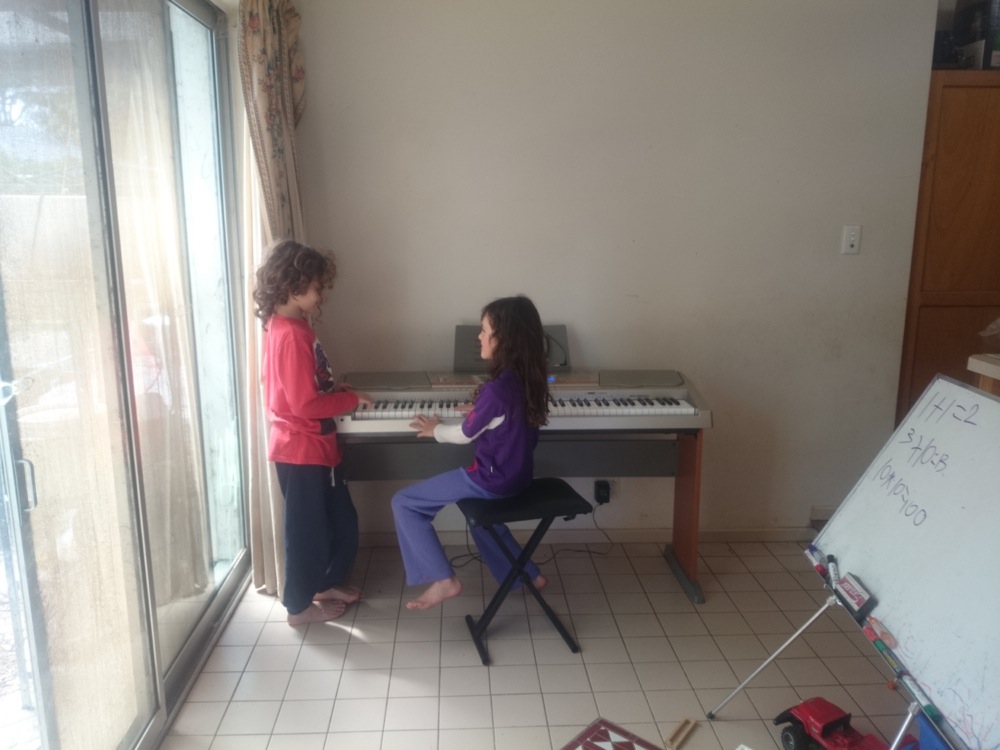 It has been very musical (or just crashy in the case of the 5yo) around here.  They now want to record songs and make videos and stuff.  Hopefully they'll practise as much as they're supposed to.