I keep forgetting to write about our day trip to New Norcia.

It was one of those things that had been suggested ages ago by mother in law as she had gone to school there and was interested in showing it to the kids (and us, though both JJ and I have been in the area previously, me on a Yr11/12 art camp and him...well he was not quite sober for most of it apparently).  This seemed like a nice little local history and anthropology/society and environment type thing (New Norcia is the only monastic town in Australia) and we finally got around to it, in the in-laws massive shiny new Toyota something or other that they'd bought as part of their retirement plans.

We parked outside the museum but decided to stretch our legs after the 2hr drive (with one pit stop past Bullsbrook for 7yo who gets motion sick after an hour or so) by looking at mother in law's old boarding school. 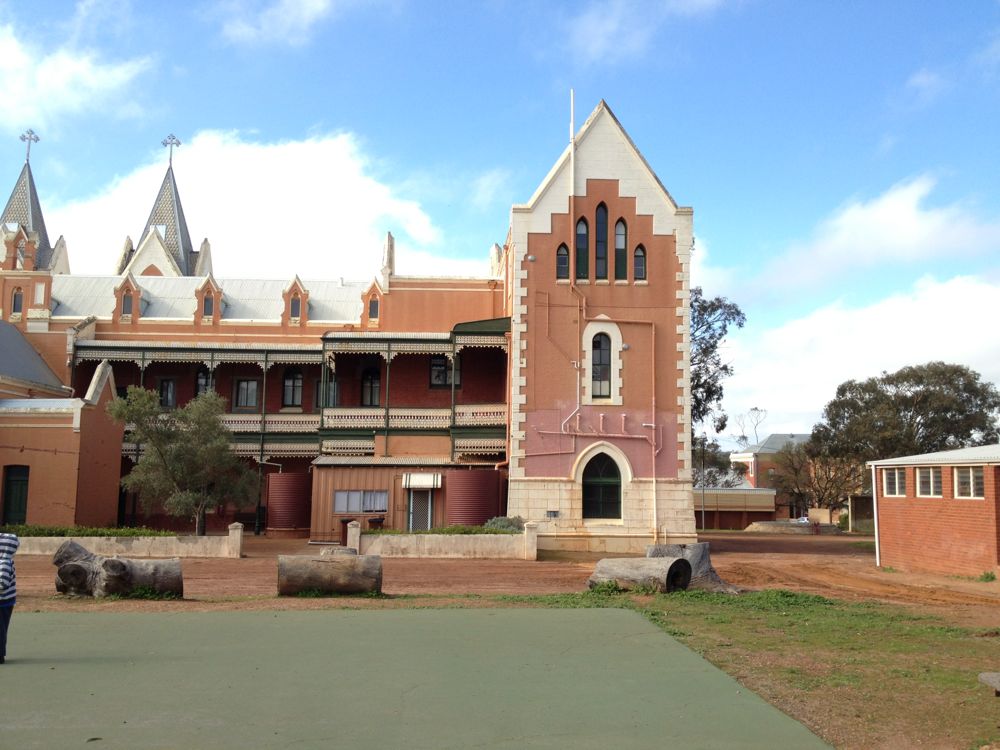 I tried taking some pano shots but failed every single one.  The fire escapes down the side of the buildings are relatively new additions, mother in law said that when she was attending the school they didn't have such things.  She had some entertaining stories such as the tradition of terrifying the new year 8 students by priming them with scary stories about the Blue Lady (allegedly the ghost of a nun who haunts the area) and then dressing up in bed sheets with a torch and sneaking up on them after lights out.  Mother in law had it done to her when she started and when she was a senior student was in on the scaring, and she and her partner in crime were sneaking back through the corridors when they bumped into a nun (who had probably come to see what all the noise was about). Taken into the light because I'm so clever like that, with my lovely family investigating the inside through the windows because it was locked up.  From hazy memory of reading the signs on the windows I think someone (headmaster/mistress maybe?) used to live in the cottage at one stage.  There is a rather large cistern around the other side that apparently still works, that was getting some repair work done.  Mother in law told us how they would have to go to the cottage once a week for a bath and everyone was run through the same bath water, starting with the year 12s and by the time the year 8s got into it everyone else had been through and the water was cold and icky. 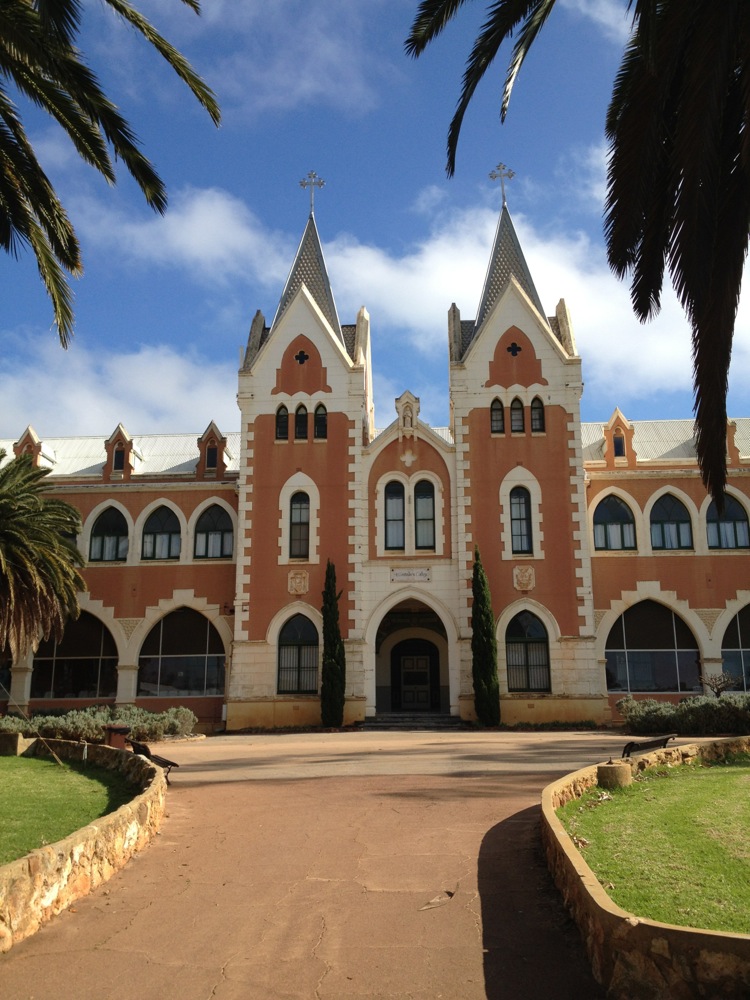 View of the church from the front of St Gertrude's

I was moving up towards the cemetary in the centre of the town to try to see if I could remember which building I had been staying when 7yo came running up saying we were going to go into the museum now, so 9yo and I doubled back.  I had been carrying around a rather heavy backpack with four full water bottles and three tablets in it (the tablets had been to help keep children occupied on the trip up, a number of their games require internet connection though, stupid governments with their stupid priorities) and really wanted to put it in the car but seeing as we couldn't find father in law who had the key I ended up hauling it through the museum as well.  Reminded me of my baby-wearing days.

Anyway.  The museum had information and stuff associated with the town. Bee keeper's handbook in the museum 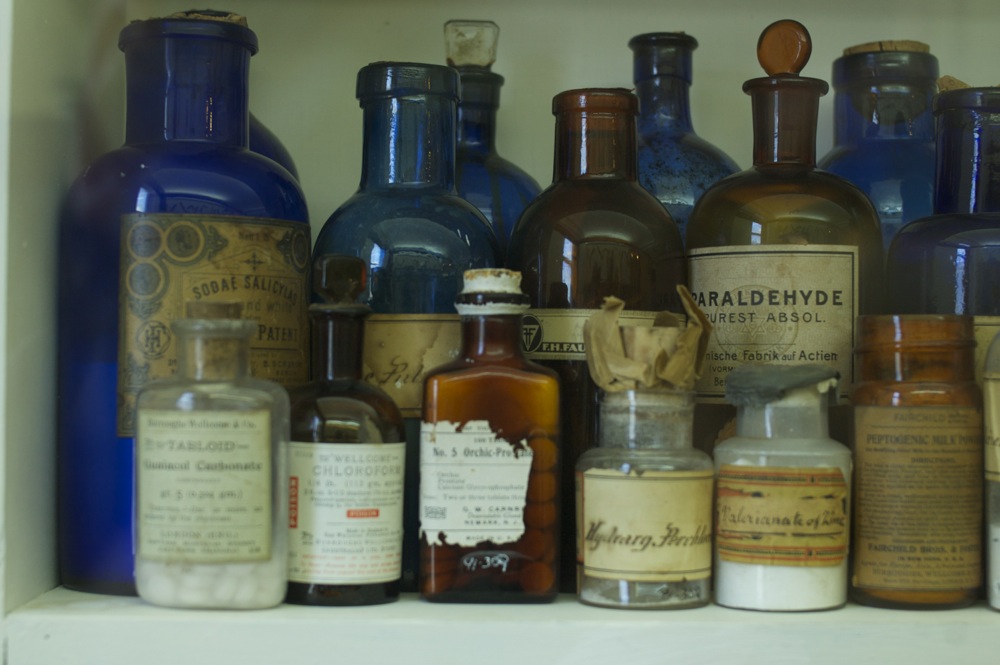 Along with the interesting items on display there were a lot of really nice paintings.  A lot of them were Renaissance/style pieces: 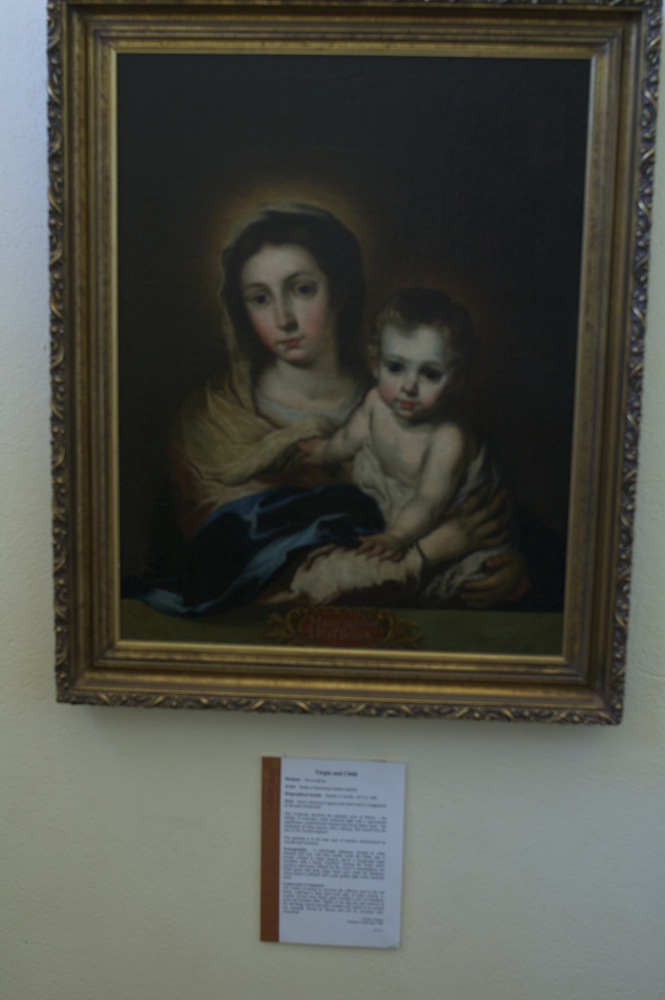 I get the blue is supposed to be a sheer skin-tight garment, but when it's THAT skin tight I maintain that it's body paint.  So there.

Some Byzantine Iconoclastic type pieces (I think, I am seriously rusty on art history): I'm not sure how this one was done, I was following a speedy 5yo at the time. The bigs may know as they were going around at a more sedate pace with JJ and grandparents

And there was this awesome bronze statue of Rosendo Salvado, one of the monks who founded the town. 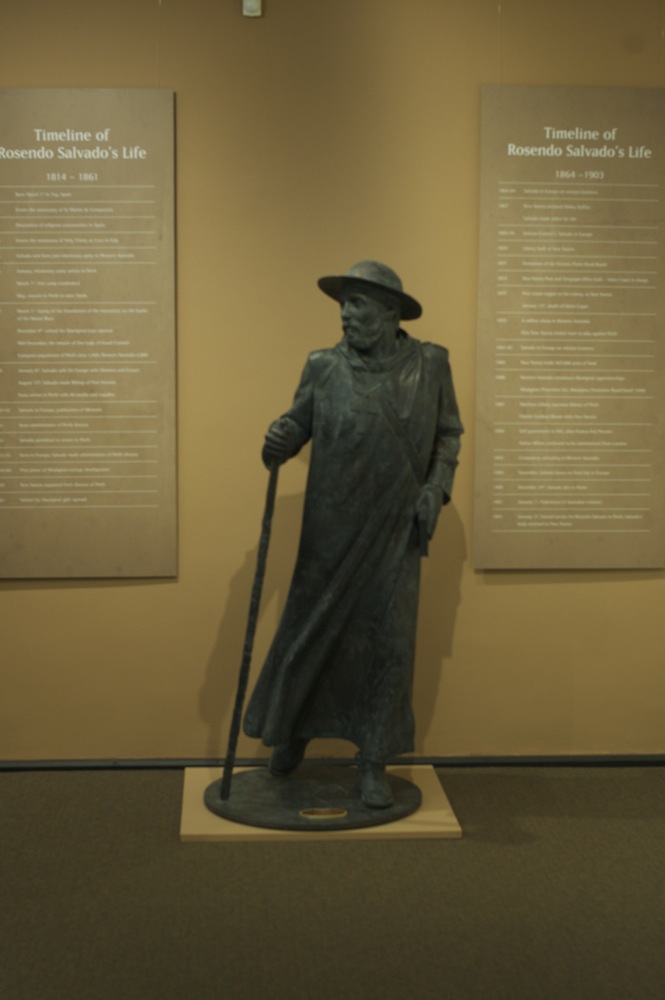 We did a lot of discussing the way people lived "back in the day" as we do when visiting a museum, and there was some discussion about art styles which interested 7yo moreso than the boys, though 9yo was suitably impressed by a lot of the artistic techniques.  As we were leaving the museum Nanna spoilt the kids absolutely rotten by buying each of them a quill and blotter and a bottle of ink to share.  Next stop was lunch at the New Norcia Hotel which mother-in-law tells us used to be a boarding house for visiting parents or something to that effect. View of New Norcia Hotel from the carpark of the museum

It didn't occur to me to take photos of the food, but it was all very good.  We'd been talking in the museum how the monks made thier own bread and olive oil, and it was what we were eating for lunch. 9yo found a couple of geckoes close to where we were sitting and we discussed what could have happened to the gecko's tail and why they drop their tails. After lunch we stopped in at the blacksmith's workshop which held a display of the tools and equipment that was used by the monks "back in the day", along with a section showing some really old fridges and washing machines.  We didn't get any photos in there due to having to stop 5yo trying to climb on everything.  There were some fun conversations with 9yo as he tried to work out how some of the farming equipment was for never mind how it would have been used, and also how it would have been put together.  We then meandered over to the cemetary where the boys and girls attending the collges would often sneak to meet boyfriends and girlfriends after curfew, and where the students on the various camps when I was there on art camp had quite openly gon and hung out before curfew because that's what cool kids did (jeez we were so lame). 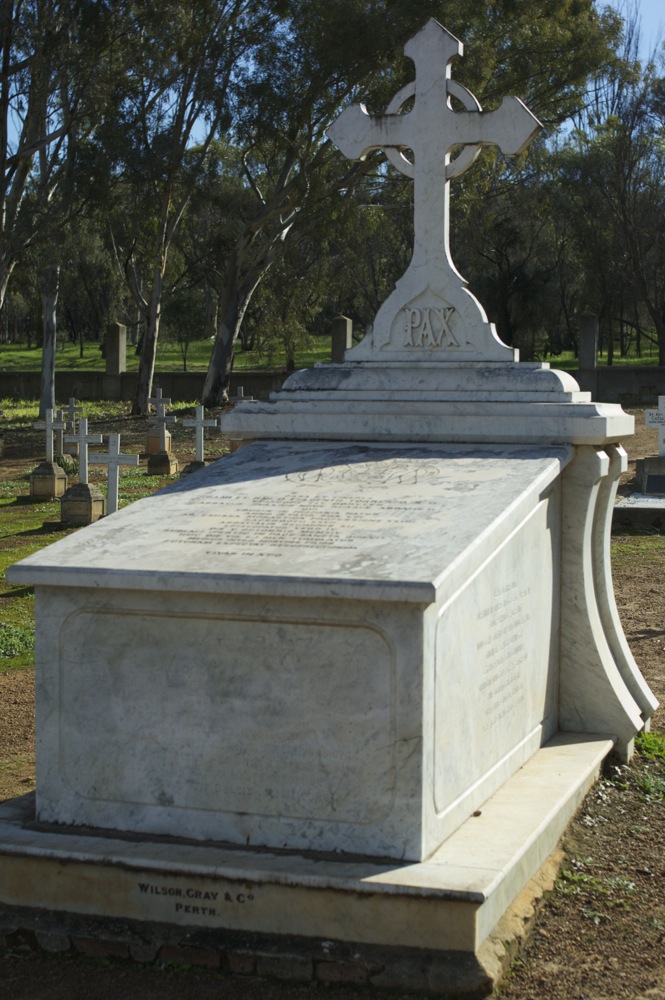 All those years ago on art camp I remember cautioning the other kids about tramplingall over the graves.  In the meantime, some of the kids from my class were perched on this.  We had no idea what it was at the ime, thought it was just a nice sculpture in the middle of the cemetery.  As we were poking around the cemetery now I told the kids I hated seeing baby graves.  Mother in law pointed out one of the graves of a girl that had apparently become sick and died while boarding at St Gertrude's, and that it's suspected she might be the "pale girl" ghost in the Wikipedia article.

We got some nice shots on the way round St Ildephonsus College: No idea what this was, we speculated it might have been an eating area Handball courts at the back of the college building We walked further down to the church with the Benedictine monastery across the road.  The monastery gates were closed but JJ stuck the lens through and got this shot. 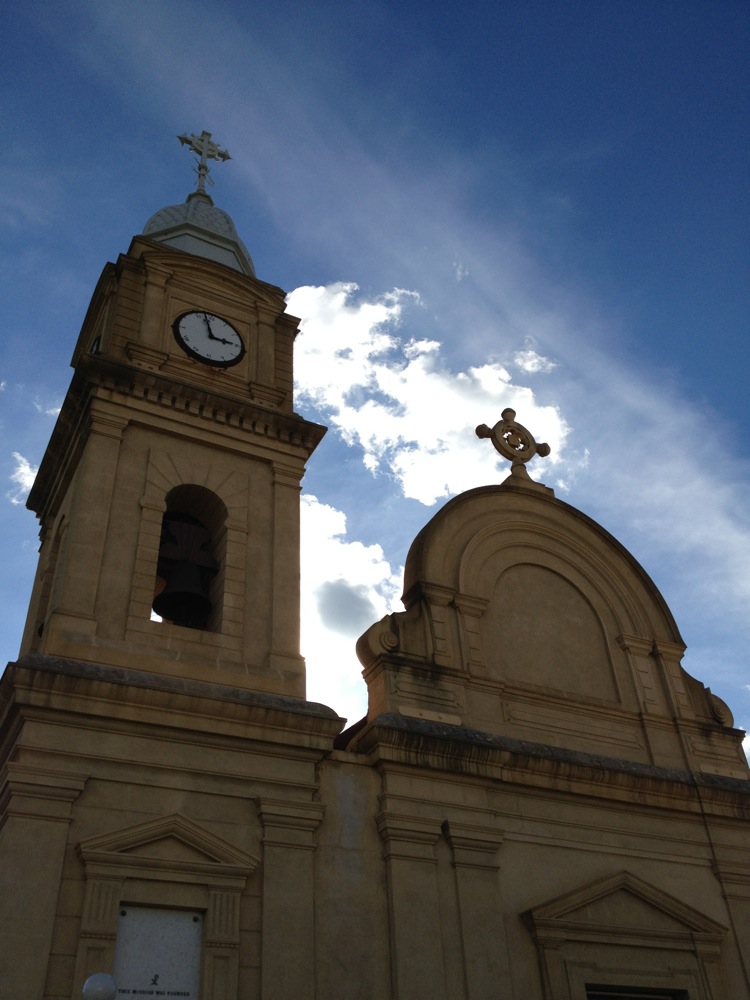 Another ghost story is that of a blue nun-looking ghost that apparently flies around the bell tower as it chimes midnight.  I walked into the church, remembered having to go in there for mass when I was up for art camp, said as much to the kids and then turned around and walked out, taking a photo of the stained glass above the door from the inside before making my escape.  It didn't turn out too well and neither did the shot JJ tried to take of the painting (called "The Mother of Good Counsel") inside the church that turned back a bushfire (the story goes that a bushfire was threatening the town so one of the abbotts grabbed the painting from inside the church, ran back out and brandished the painting at the bushfire while praying to be saved, the wind changed direction and blew the fire away from the town and the fire died out soon after). 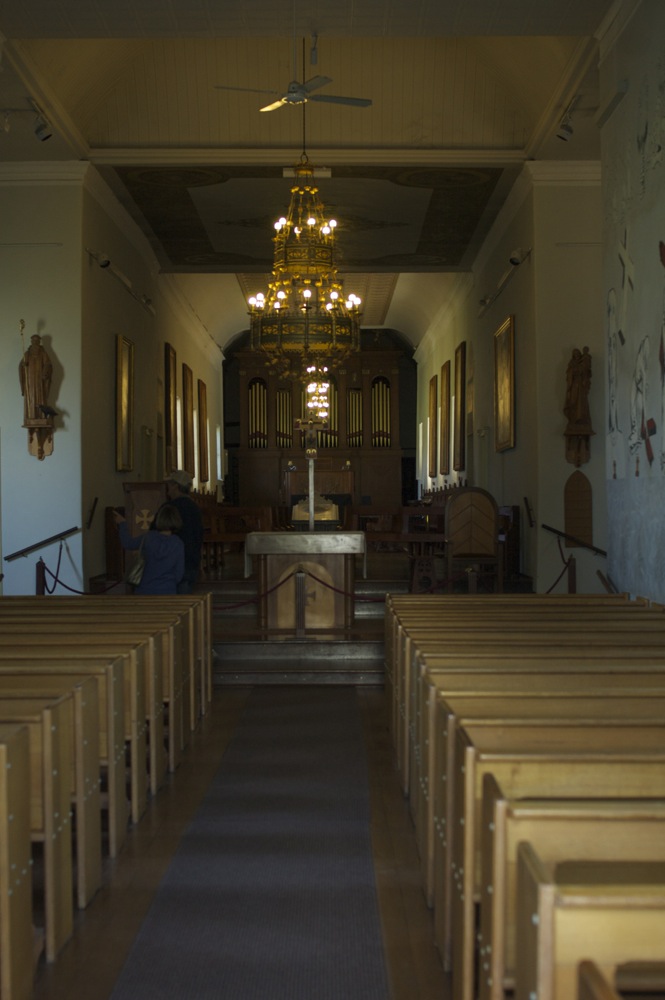 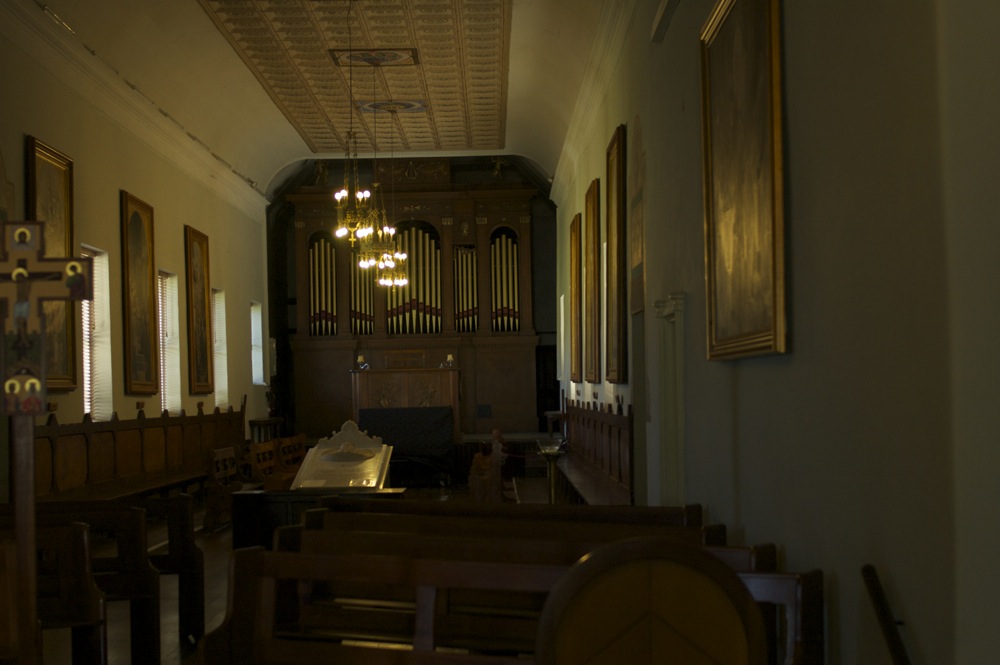 We investigated some cottage sites as we headed back towards the car, and 9yo started on his usual sad about how it wasn't fair that some people got better things than other people just because they were full of poorly justified self-importance.  The kids played with their tablets for a little while before falling asleep on the way home.  When we got home they wanted to use their quills.  I told them the quills were a top shelf item (meaning they went on the top shelf in the art cupboard where the things can't be used without adult supervision), and showed them how to use the quill, ink and blotters. Unfortunately knowing how to use them is my limit and I told the to learn how to do calligraphy or otherwise write properly with them they'd have to ask Quadrapop (who is currently holidaying in Portugal with Draculaura the Monster High doll, we've been following their blog and Instagram though not Instagram so much as I have to use a different browser for it).  Their scratchings went into their files.  9yo had grumbled about having to get up early to leave that morning but told me he had found the experience interesting and was glad we'd gone.

I'm considering doing a Hubscursion out that way next year, and am vaguely curious how often the guides have to deal with Stolen Generation type questions as curly things like that may crop up if we do.