We binged out on history recently.  I can't remember if I mentioned instating a docos-only-before-bookwork rule to stop the kids from gluing themselves to screens and routinely refusing to come do the bookwork, but it's been working reasonably well.  Horrible Histories was the recent favourite, I think they've watched every dvd we have now as well as anything on iView at the time, and favourite dvds have been repeated with them singing along.  As well as watching Horrible Histories, 9yo has also decided to have me read him the books for bedtime story.  We're also still very slowly working our way through the very thick Ned Kelly book.

We had a trip to the Perth Museum, I took some reference shots but not a lot of photos.  We didn't do the dinosaur exhibit as money as been a bit tight but enjoyed the rest of it.  7yo would have done better if she'd tagged along with The Linux Geek but she absolutely had to stick with me so I warned her not to get impatient with 5yo who just wanted to see EVERYTHING as fast as possible.  The 5yo flittered between the parents and the bigs generally went where the 5yo wasn't so they had time to at least look at things and read signs of things that caught their interest.  We pretended to be rebellious and went right instead of left from the entrance against the flow (actually the Hackett Gallery was housing the dinosaur exhibit so we couldn't actually go that way) and went through the Dampier Marine Gallery and Mammal Gallery.  The bigs took their time wandering through, stopping longer to read signs of things that looked interesting.  5yo paused to stare in wonderment and exclaim "WOOAAAAAHHHH" at the things that caught his interest, occasionally asked what something was, occasionally fired a barrage of questions about it and more often ran through quickly trying to see EVERYTHING ALL AT ONCE.

7yo wanted to do the bird gallery which we haven't gone into in a while seeing as it's kind of tucked in a corner.  She got out the identification sheet and went through matching up the numbers on the display to the index on the sheet, and told the 5yo what he was looking at when he asked what bird THAT was.  5yo was fascinated by the egg display, especially the elephant bird egg.

A lot of time was spent in the Katta Djinoong gallery.  There seems to be a new bit up the back, or perhaps it was always there and I don't remember it, which had to do with theatre.  The bigs were interested in different things, 9yo more interested in the technology and tools and 7yo more interested in the adornments, both found the rock art very interesting.  9yo read some of the history and early interactions between the Aboriginals and the white settlers and had this look that he gets when he realises that parts of the world used to be and some still are terribly unfair and unjust for exactly no good reason whatsoever.

The dinosaur section in Diamonds and Dinosaurs is always a favourite, lost the bigs for a moment as they traipsed through again looking at different things and reading what interested them.  5yo bypassed the Moa egg this time (every other time we've been through he was fascinated by the BIG EGG!) and was more interested in the large trilobyte models as well as the skeletons and some of the fossils.  They didn't pay a lot of attention to the rocks aside from being fascinated by meteorites (because they were from SPACE) and the model of the Earth.  7yo admired the pink Argyle diamonds for a long time and they all got a kick out of the phosphorescent rocks.

We ended as we usually did with the Discovery Centre.  Lost the kids again as there is a tonne of stuff to look at and do in there.  We also popped across to the Alexander Library and Tao desperately wanted to go upstairs (because upstairs) and also wanted to find a book on ferrets.  Due to being somewhat tired and couldn't be bothered stashing the large backpacks we were carrying, the stuffy old adults denied his request.

In the middle of the same week we went on our Wilkinson Homestead excursion with the Hubscursion group.  They cater for homeschool groups as well as school groups (they managed really well with our one big group of 4-14yos, which was supposed to be split into two groups of something like 4-7 and 8+ but then some people weren't able to make it after catching flu).  The first activity was "Making Do" where the kids discussed what early settlers made their houses and tools and furniture out of. 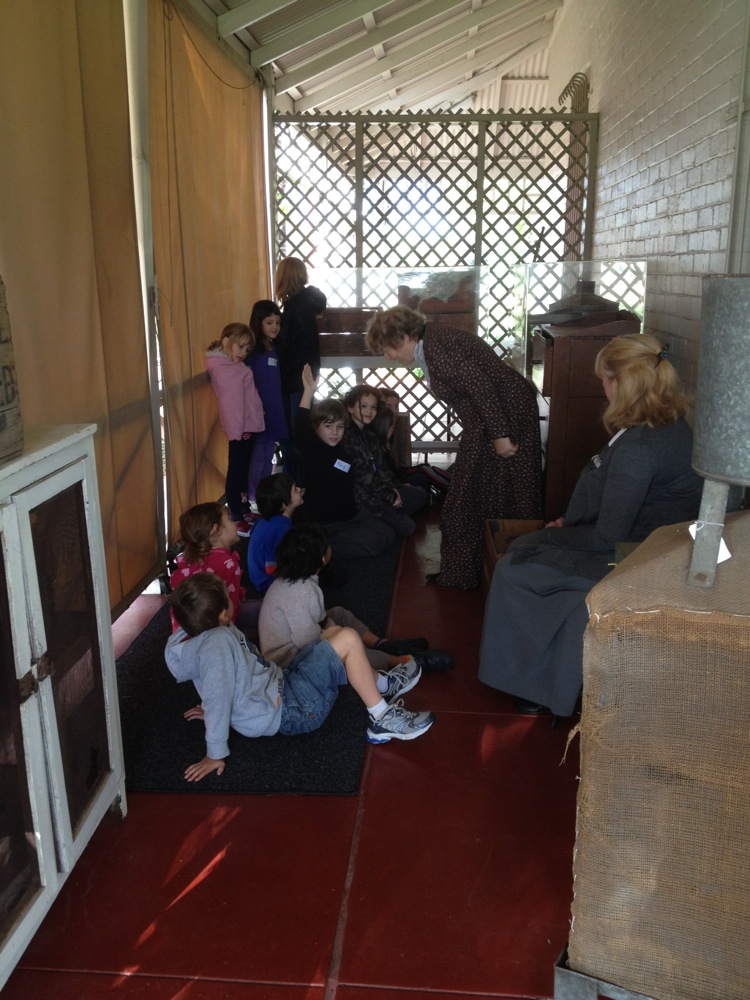 Discussion on how people made the stuff they needed.  Coolgardie Safe in the foreground.

The volunteers were just about to explain the Coolgardie Safe when it started to hail, which caused a retreat into the museum to do the next part of the activity, which involved looking at a rug made out of various scraps of cloth and some examples of toys that were made out of handy materials and/or spare parts/cloth.  The kids then got to make their own peg dolls. 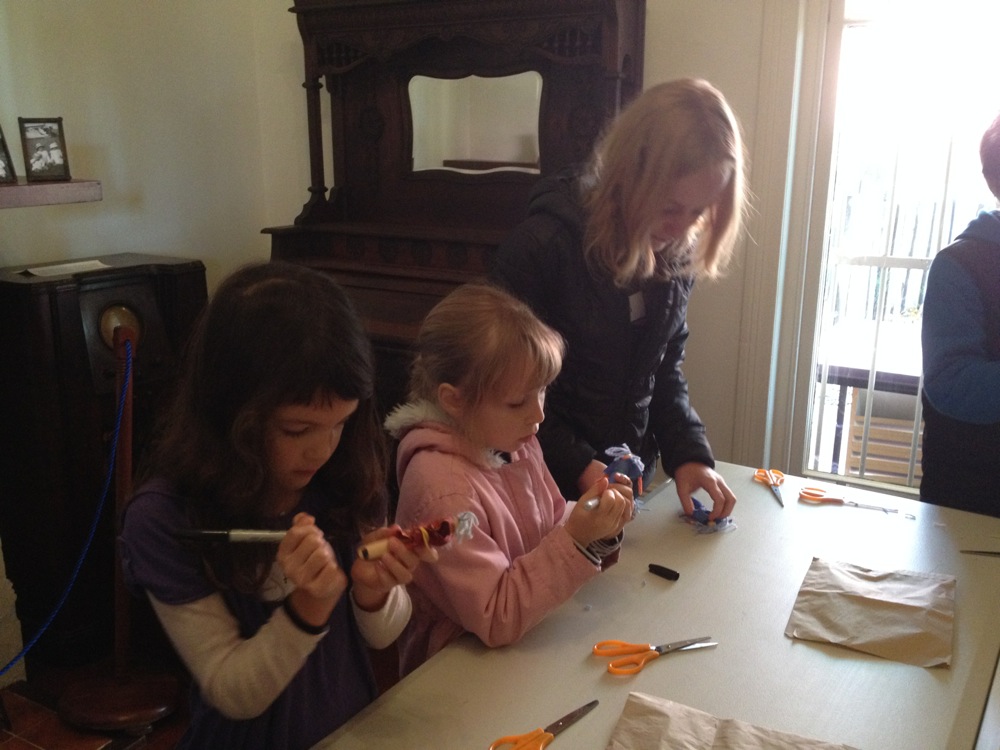 7yo and friends making peg dolls 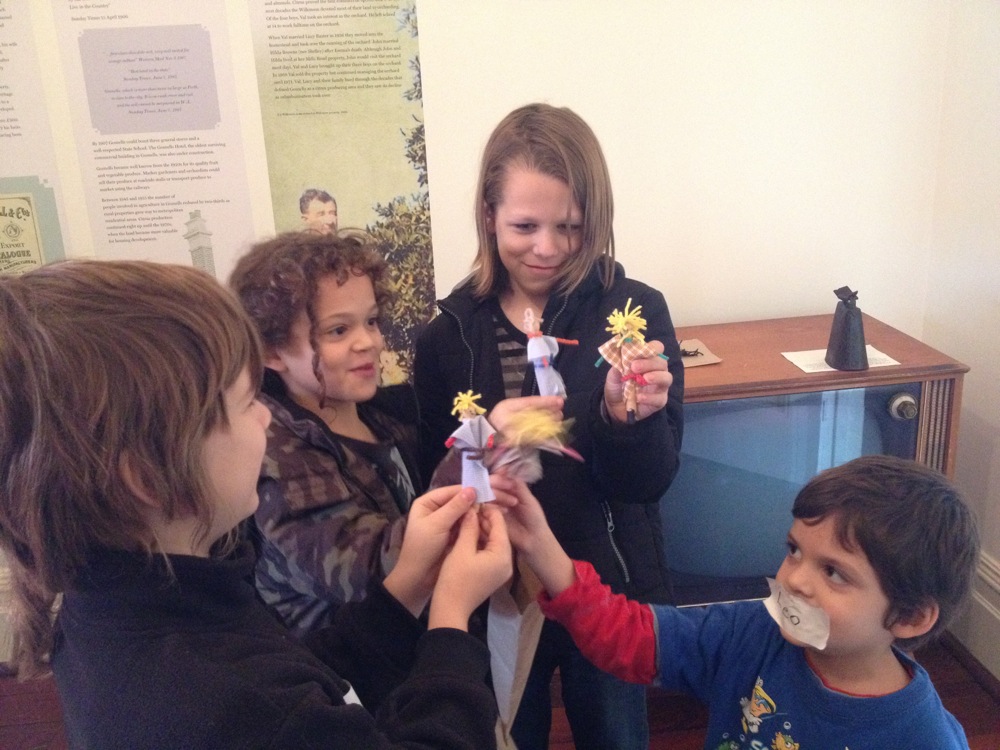 5yo, 9yo and friends playing with their peg dolls

We were supposed to do "Old fashioned washing" but due to the weather ended up doing "School room" instead, which was conducted in the barn loft.  The volunteer running that activity first had the kids sit in a circle and study some images taken in the 1900s and discuss the differences of what people were wearing and how Gosnells looked at the time, as well as how different a schoolroom in the 1900s was compared to schools of today.  The kids were given "old fashioned names" and two of the kids that could read were handed a line to read out when they were asked why the character they were playing hadn't been at school the previous week.  It was explained that girls and boys had to line up in separate lines, and the teacher would check to make sure hands were clean and hair was done (in the case of the girls) and nit free.  One of the boys had to go pretend to wash his hands in a basin.  The girls then preceded the boys up the stairs to the school room as that's how things were done in those days. 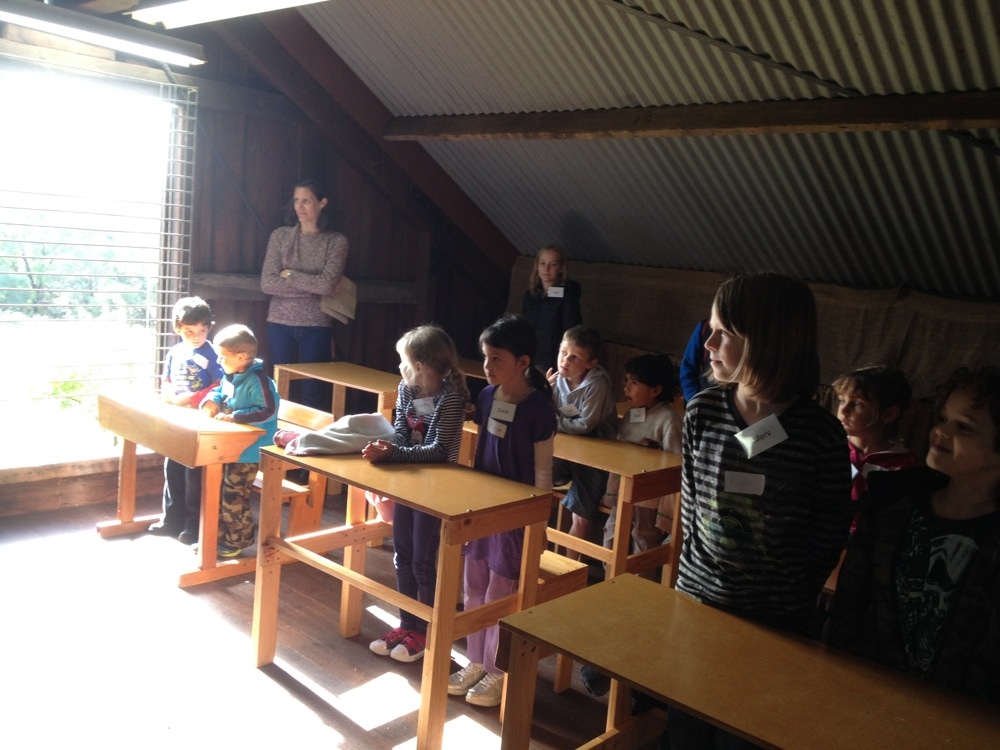 The schoolroom was a cute setup.  The above photo was taken with me dangling rather precariously over the stairs we'd just come up trying not to fall down them while getting as much schoolroom in as possible.  The kids are standing for the national anthem which was "God Save the Queen" in those days (first time I'd heard the actual song, I know a couple of parody versions) before sitting down and yelling out "present!" when they heard their character names being called out for roll call.  The teacher then asked the two kids with lines why they hadn't been to school in the last week, and the girl responded that she'd had to help her mum with the washing and the boy that he had to help his dad pick beans.  This led onto a discussion on how kids often ended up missing school because they had to help out on the farm or with household chores.  There was also a quick talk on how kids would often walk to school barefoot and put their shoes on at school to reduce wear on shoes because their parents often couldn't afford to keep buying new shoes if they wore out.

The kids got to recite the two times table and then did a spelling test and practised writing on the original iPads. 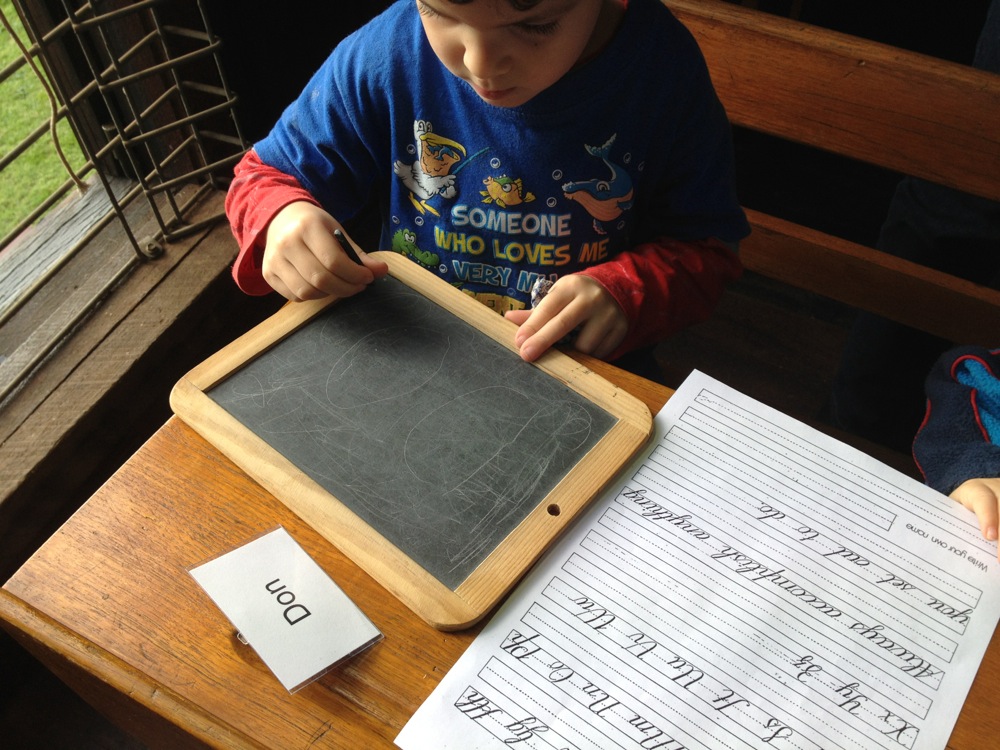 Writing practice on a slate

The kids were supposed to be doing copywork from the provided sheet but the two youngest didn't seem that interested in writing out the alphabet.  One of the mums encouraged them to write their names, so 5yo decided he could write his "old fashioned name" and very studiously copied the name tag instead of the sheet, the first two letters were written way too large so he squeezed in a very small N at the end.  I thought he'd done quite well, and may need to get something the size of the graphite stick as his pencil grip there is better than it normally is.  The view of the barn museum from the loft was pretty cool. 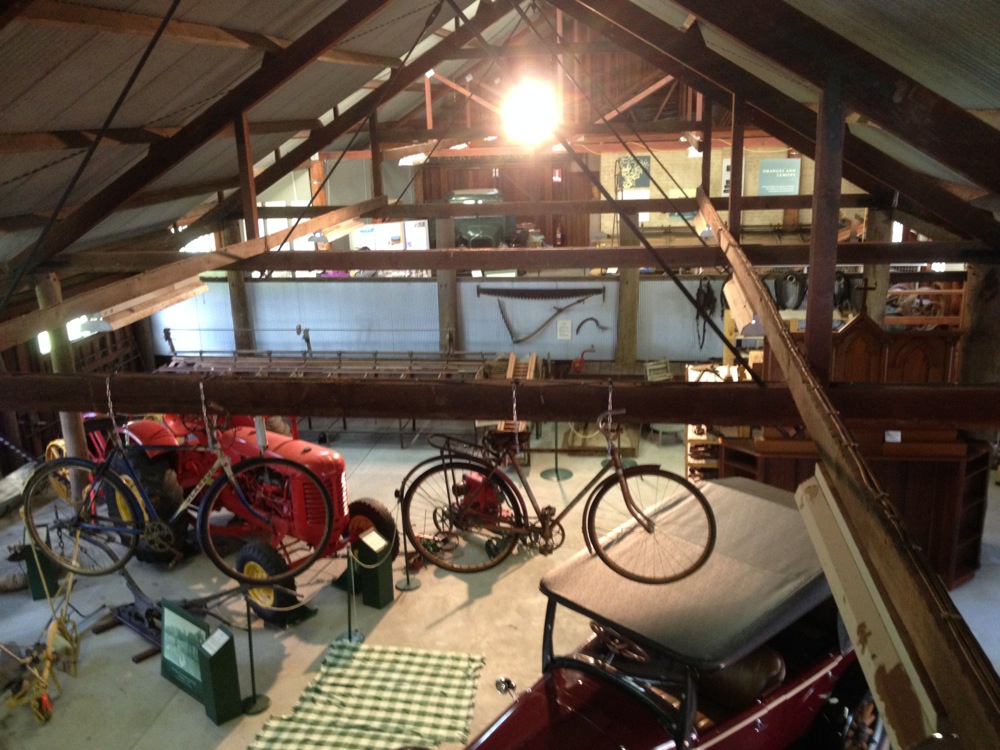 View from the loft

The last activity was "Oranges and Lemons" wherein the kids went to the orchard out the back and picked a lemon each, then came back into the barn to learn about the different citrus fruits that were grown in the homestead's orchards, got to sample various citrus fruits (mandarins went down very well, lemons and grapefruit not so much, there were also tangelos and the biggest pomelo I have ever seen which didn't get cut up) and then each squeezed half a lemon for the volunteer to make lemonade while they learned about the fruit grader from a gentleman who had grown up on an orchard. 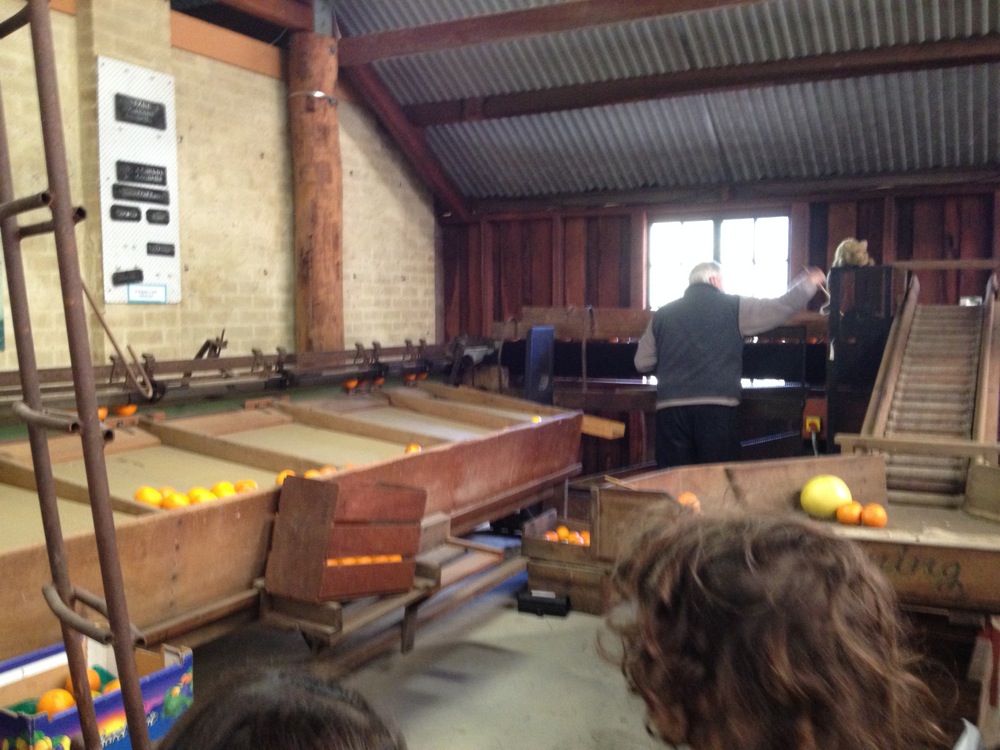 The machine is really old and cranky.  They tried sending the pomelo through it and it got stuck, slightly too big.  The gentleman explained how the fruit gets sorted and then packed into crates which were then stencilled and taken to the city markets, which used to be in Perth but then moved to Canningvale.  After the demonstration the kids got to drink the lemonade the volunteers had made up from the lemons they squeezed (had to stop the 5yo after he got thirds), all the kids agreed the lemonade was amazing.  Those that wanted to did some stencils on the table that had been set up before heading outside for lunch and lots of running around in the nice warm sun (the rain from earlier cleared up).

The next morning the bigs made a stage out of a box we'd sent a laptop away for repairs in and received back and the three of them improvised a puppet show.  7yo wanted to film it but couldn't seem to convince her brothers to get past "rehearsing" (which apparently meant more improv). 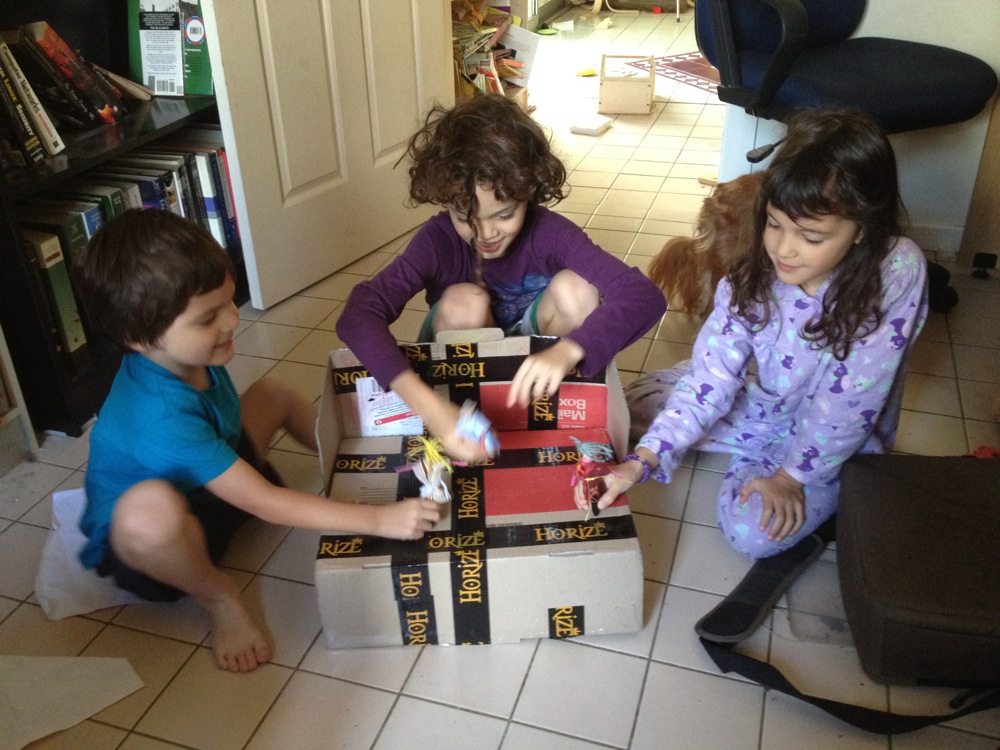 More recently 9yo and I were discussing future prospects and I was joking about how pro footy and pro gaming (two things he has considered as he loves both activities) might be a bit tricky to manage.  His response was "Nah gaming and footy is just for fun, I think engineering will be a career."  He then explained to me what kind of engineering he wanted to do, and keeping in mind that he may change his mind and ther emight be some stuff that he gets interested in that doesn't exist yet, the loose plan for the moment is we'll continue on with a bit of extra focus on maths and science (focusing mostly on physics and chemistry) without neglecting anything else, and when he's 15-17 he can start an engineering diploma at one of the TAFEs and then use that to get into mechatronic engineering at Curtin.  I'm glad he's thinking about these things.