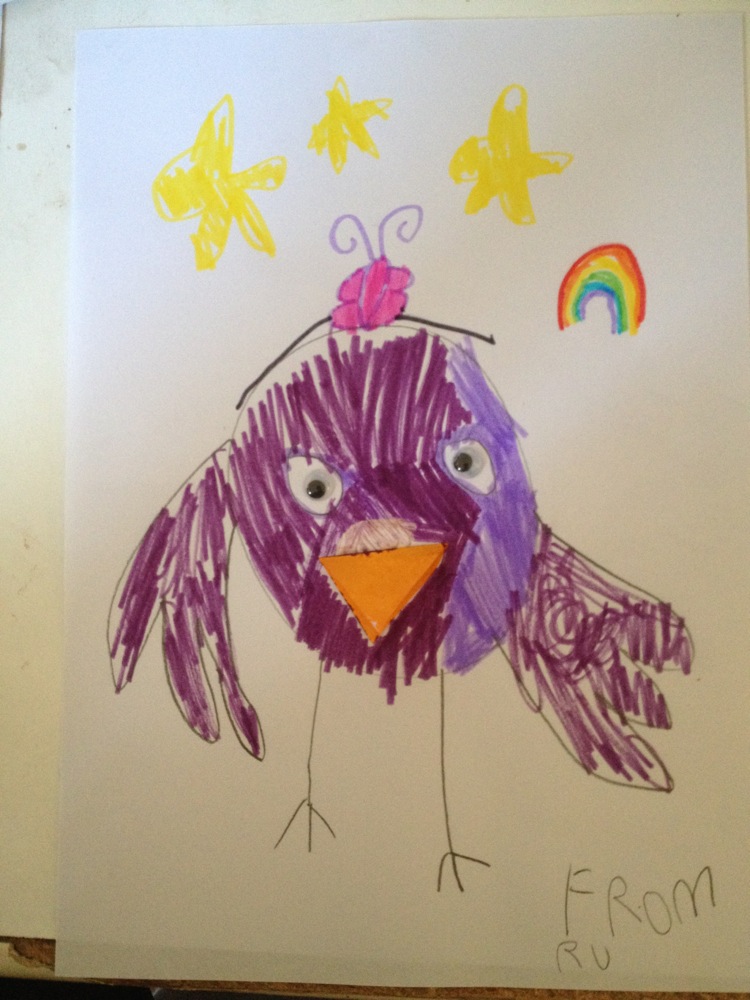 7yo's pic of Hootabella, one of the owls from the Giggle and Hoot show on ABC4Kids.  She has since added in a magic wand and we will be sending it in to the Giggle Gallery along with one she helped 5yo with 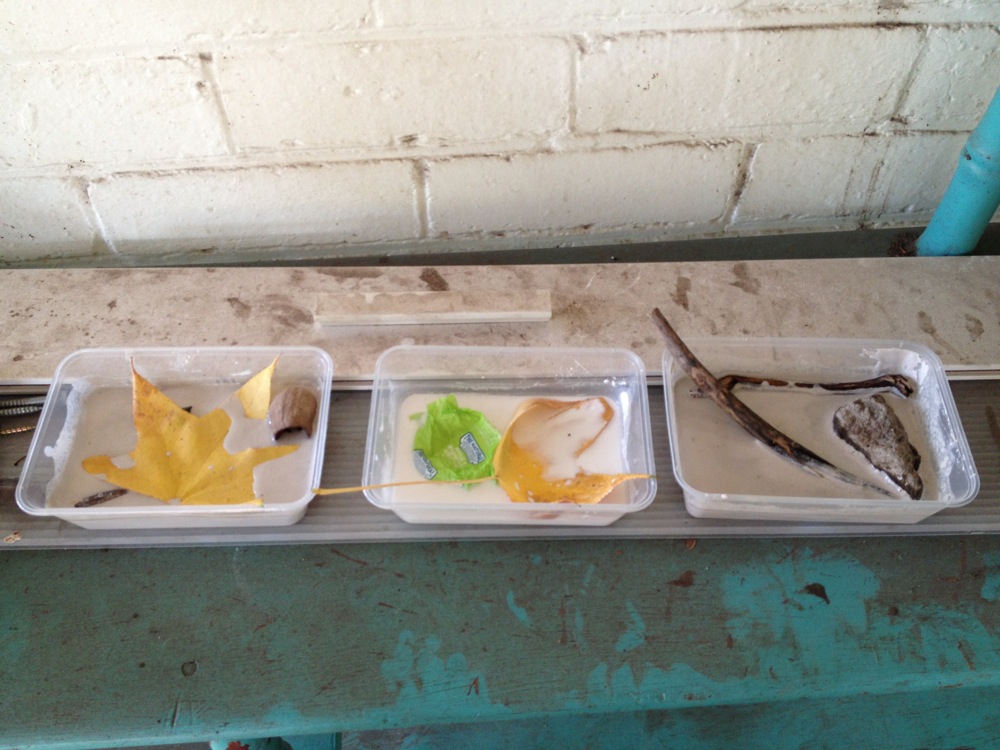 7yo found a couple of packets of plaster of paris in the art cupboard and absolutely had to use it RIGHT NOW for something, so we made quick and dirty and very shallow fossils.  From left to right: 7yo's, 5yo's and 9yo's

Today is ANZAC Day, and we usually make ANZAC biscuits, we seem to be out of dessicated coconut (I knew I forgot to ask Josh for something when he rang up to ask if I wanted anything from the shops) and I have yet to check if one of the shops down the road is open.  I am also very tired after a stupidly tiring day yesterday.  We tried out going to kung fu training after footy and 9yo had to get a stern talking to about his behaviour.  7yo behaved herself as per usual and 5yo was tired and overstimulated but surprisingly managable.  I've told the kids to watch the Horrible Histories World War I dvd and/or read the book, but have had no takers yet.  We talk about it in various levels of detail every year so I'm pretty sure they get it (along with my anti-war sentiments).

5yo had his first Auskick training ever and had a great time and "made two new friends" and probably didn't know there were so many 5yos in the world.  9yo had a great time at his training session as per usual.  7yo's usual playmate is still on holiday but she made new friends, and is counting down the days til gymnastics resumes next school term.

I have now found and organised the entire set of Reading Eggs books so can now do things "properly" with the 5yo, we are doing bookwork followed by reading the associated book after the lesson, and before his bedtime story he reads me one of the previous books.  He can still go as far or otherwise as he likes on the computer, and still prefers playing Math Seeds.

7yo recently received her new workbooks after almost finishing her Reading Eggs 4-8 books (still has a bit to go on 8), they are English books one above her grade level so letting her get away with one page per session as she does seem to have to think about what she's doing, and there is a lore more reading and instruction following than she's used to from the Reading Eggs books.

9yo is having trouble motivating himself or being motivated by us to do anything other than watch tv and/or play computer games and studiously avoids bookwork and doing his chores, so trying out a new thing where I've told him to tell me what he wants to be when he grows up, and we will work towards that, and that it doesn't matter if he then changes his mind as he probably will and several times, as we can do anything and we'll roll with it.  At the end of the day when he gets to wherever it is he wants to go he'll be able to do what he wants to do and will have a pile of skills and knowledge from investigating all these other options.  That's the theory anyway.  I should do a fly-through of some of his redstone contraptions in Minecraft, he's been experimenting with that quite a bit lately and made some simple minecart rides and secret doors and last I checked was working on a rather large machine (though "large machines" are really easy to build in Minecraft due to the way you have to lay the redstone dust).