On two different weekends, we hit up the Aviation Heritage Museum of WA in Bull Creek and the Army Museum of WA in Fremantle.  I think the boys got more out of those trips than the girl did so next stop might have to be the Perth Museum (she has a special liking for the butterfly corridor) or Art Gallery and I suppose SciTech or the Zoo can also be considerations, somewhere she enjoys at any rate.  Both these places are great, the guides are extremely helpful and are often floating not far away and are happy to answer everything about everything.

Due to the lighting inside the place a lot of the photos were a little blurry or dark and would require photomanipulation to be usable.  Seeing as I tend to do these things quickly I grabbed some I wouldn't have to do too much to and just adjusted levels and sharpness. 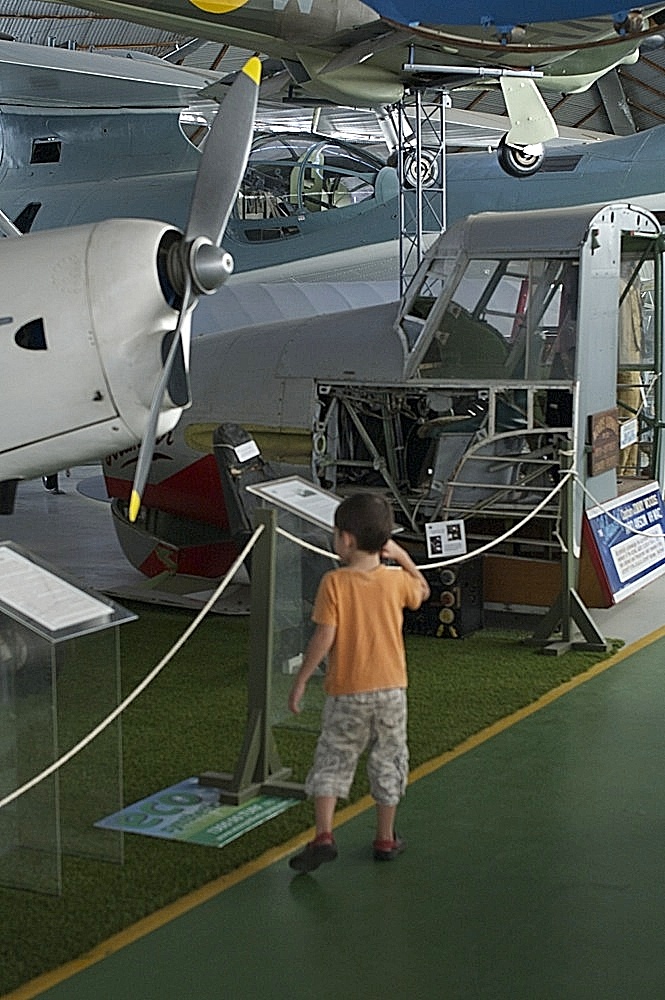 5yo checking out the planes 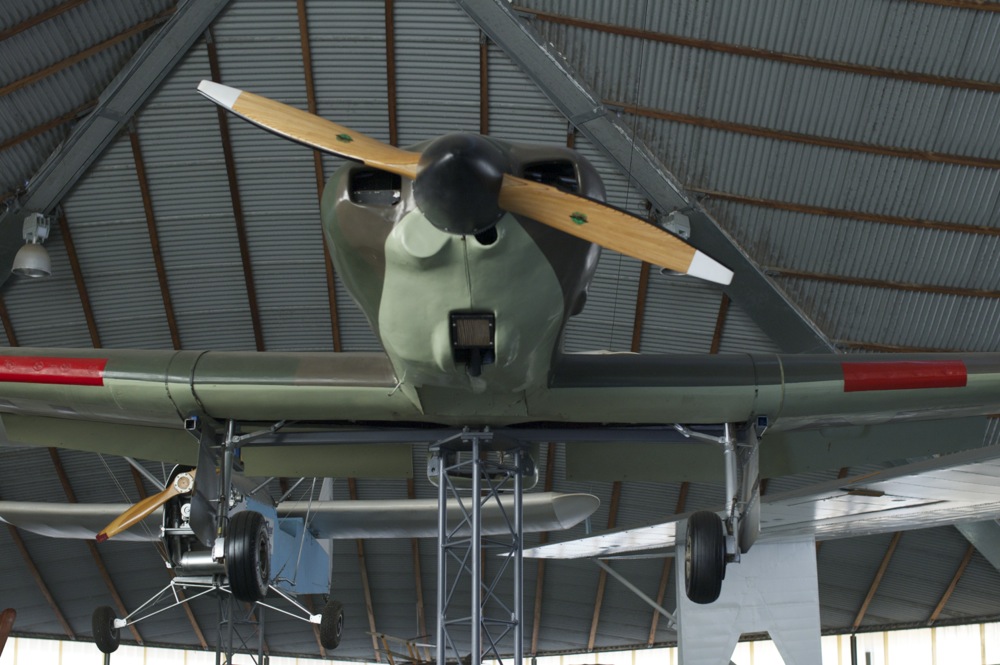 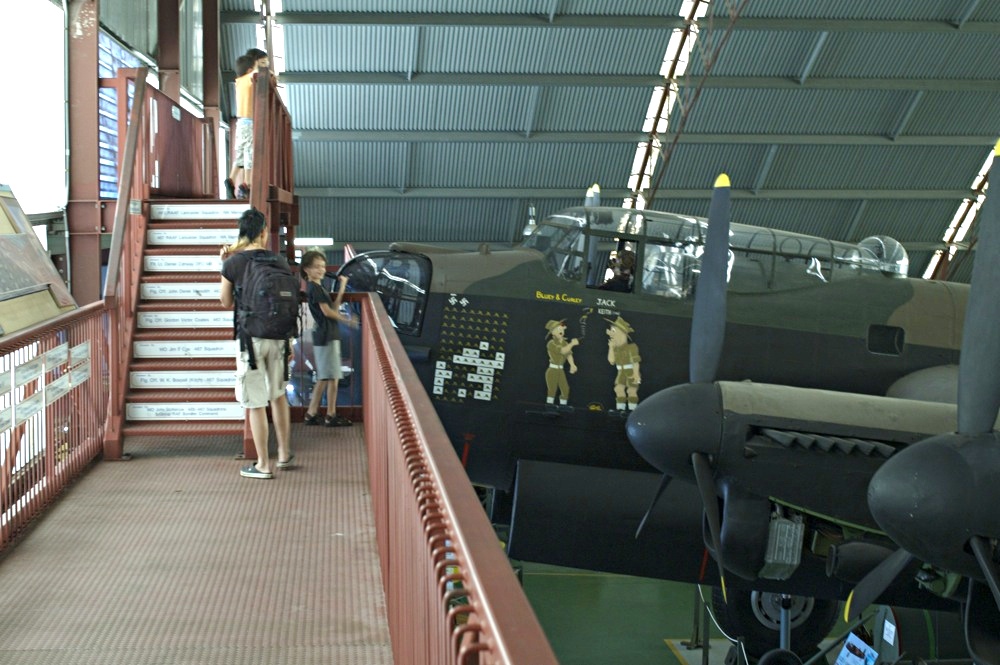 Plane with cool artwork from the side.  We are on the top viewing platform 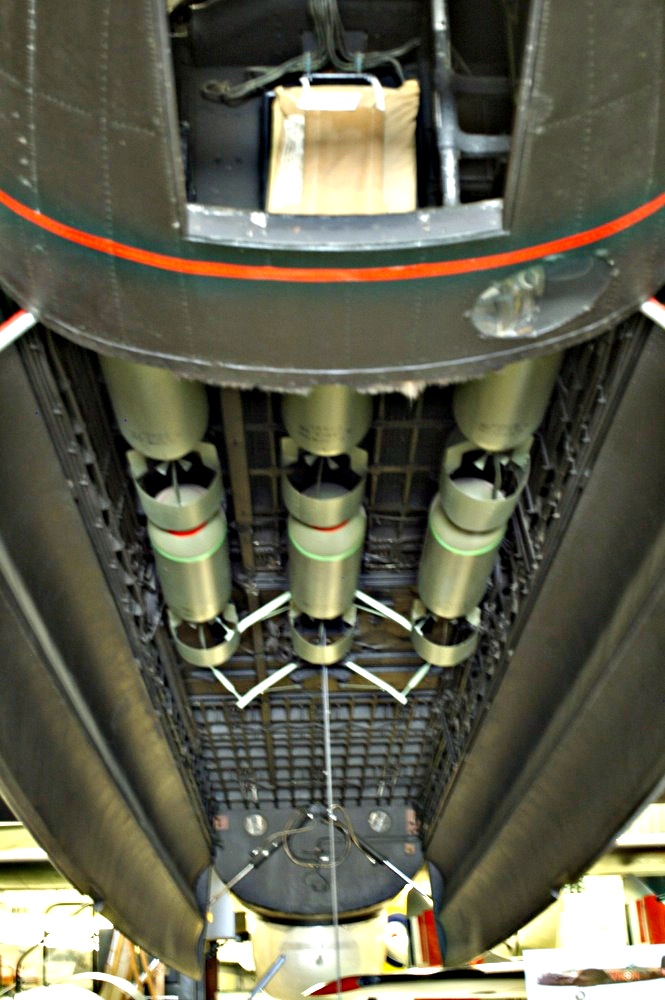 Bombs in a bomber 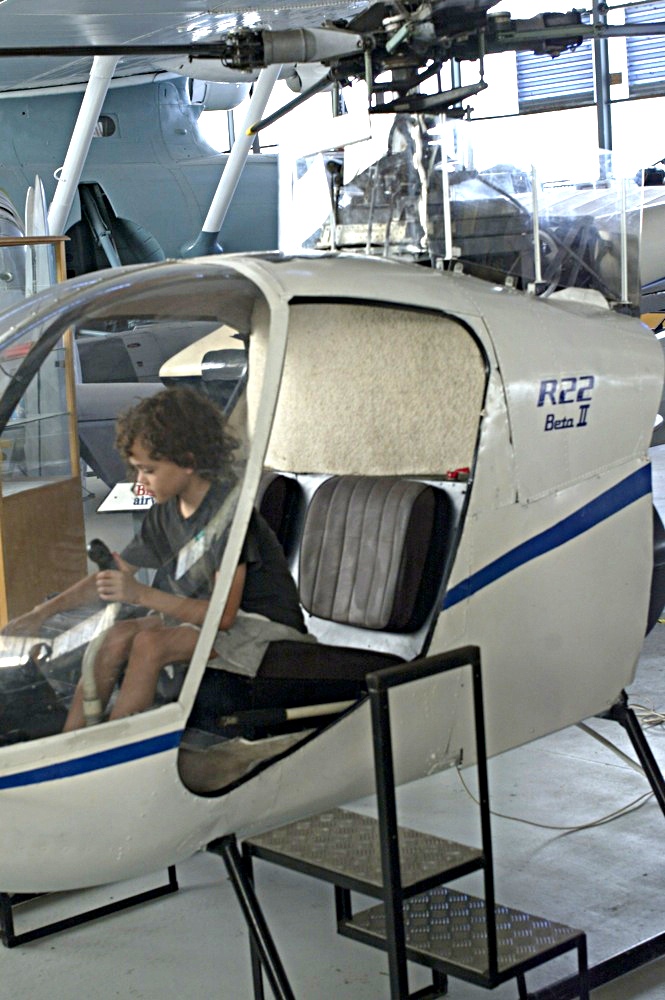 Helicopter with working controls that kids could try out.  9yo spent ages trying to figure out what did what 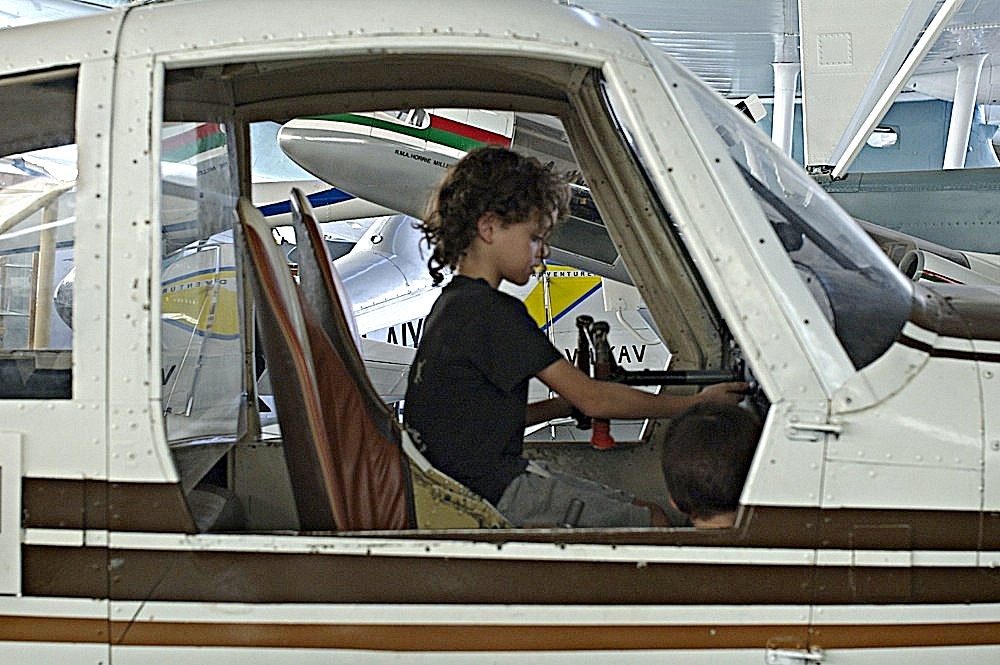 9yo and 5yo in the plane with working controls, 9yo trying to figure everything out, 5yo just excited to be "driving" a plane

Josh didn't get many photos from the Army Museum due to the lighting inside the place and the fact a lot of the things he was trying to take photos of were in glass cases, so a lot of the things ended up with a lot of reflection.  I'd told a friend that her oldest would probably have really enjoyed the Aviation Museum so when Josh decided to go to the Army Museum for the last excursion we asked if the teen would like to come along for the trip.  The teen had a blast and spent a lot of time explaining the details of a lot of the weapons and vehicles to myself (I readily admit to suffering low flying jet syndrome for a lot of it, basically he pointed out a Howitzer and I recognised the other Howitzers from the shape but this kid could rattle off what size rounds they fired and how far and and and...) and 9yo (who listened with rapt attention and followed the teen around for most of the exploration).  They are prepping a pre-1914 gallery which should be ready in a few months (the date on it was "mid-2014") so we are looking to head back in a few months to check it out.  I chose not to include the good photos with the child that wasn't mine in them which ended up being most of them.  The museum was set in some old army barracks. 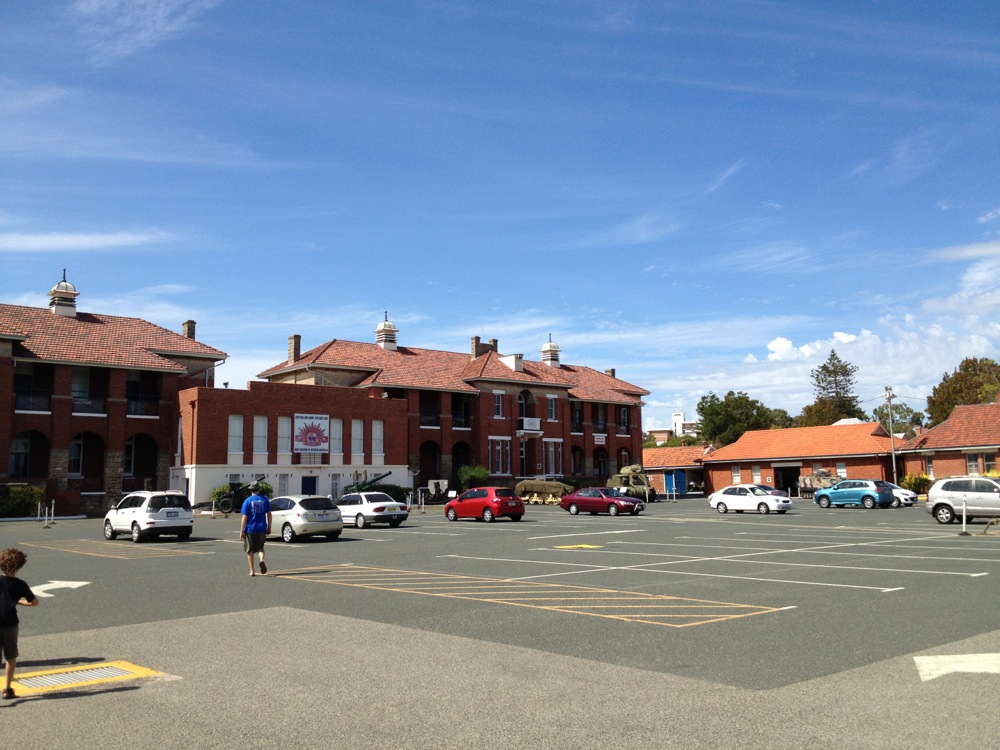 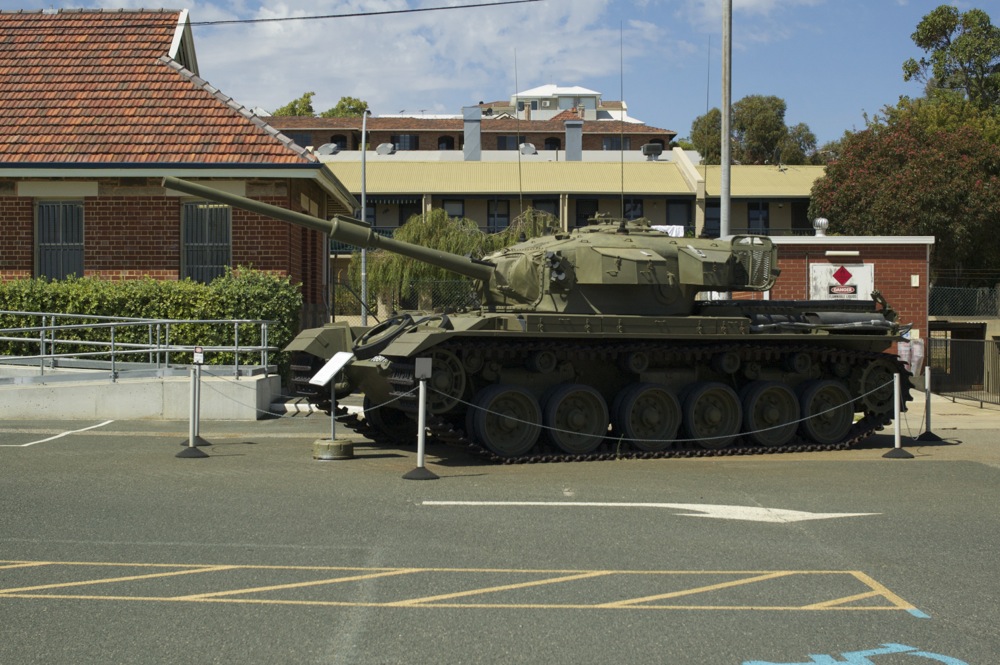 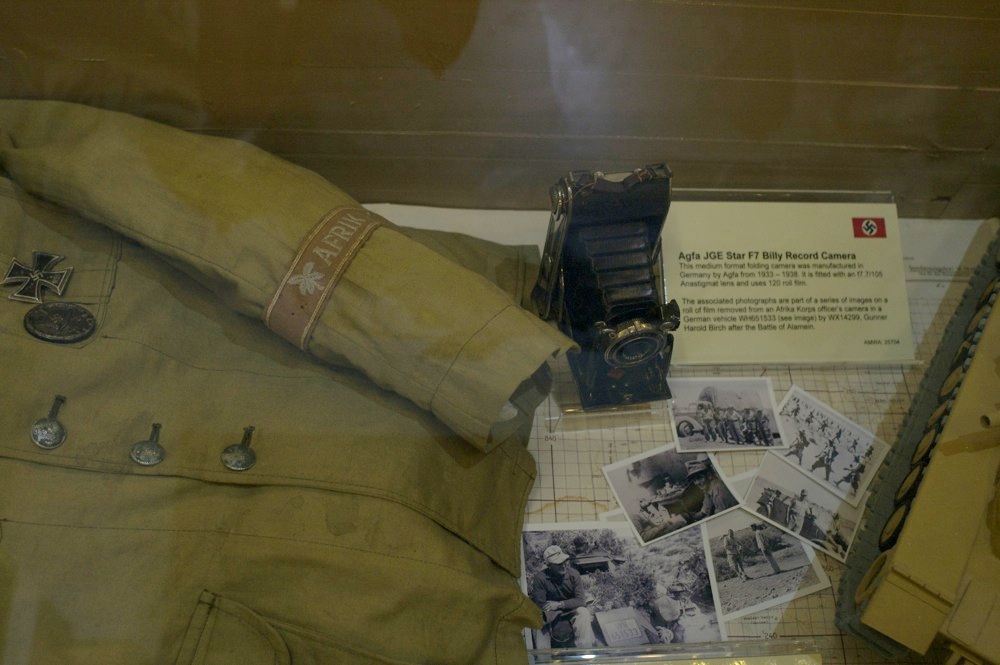 Uniform, camera and black and white photos.  5yo had a very hard time believing the thing was a camera 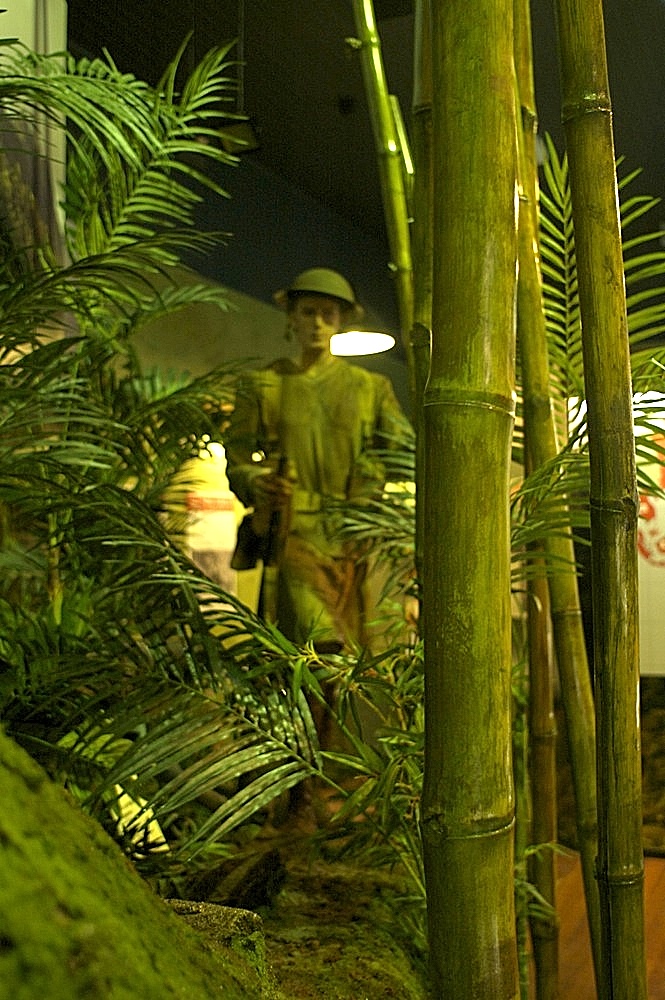 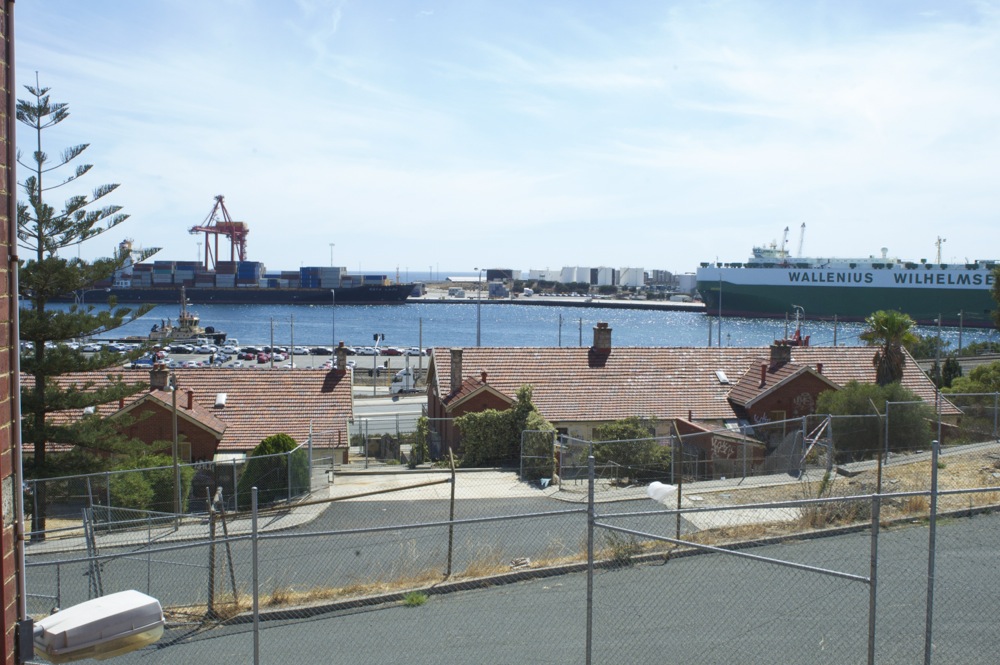 Medals at the entrance of the POW gallery

I felt weird when I stepped over the threshold of the POW gallery and couldn't work out why.  Josh pointed out the name of the gallery which was on a rather large sign on a photo.  I struggled on but as we got deeper into the POW gallery with the rather confronting displays with the models that looked like they had been sculpted in a rather caricaturish fashion rather than the now familiar generic mannequins that had been in the rest of the museum, the buzzing in my head continued increasing to the point where after I'd rounded the gallery explaining as much as I could to the curious 9yo, I eventually told Josh he was taking over as I had to leave.  The small two followed me out and we hopped next door to the ANZAC gallery.  Aside from aftershock the buzzing cleared as soon as I stepped out.  I'm not sure if it was something to do with the building or whether whoever put together the displays had difficulty doing so (I know I would have).  One of the lovely guides was trying to explain a sculpture to us that had been done based on a picture, and there was a bridge which I seem to remember something about some ancestor (grandfather or something) helping to build, but buggered if I can remember what bridge or even if I'm remembering such a thing correctly.  I hope I didn't come across as rude to him when I had to run away.  Seeing and working on the photo is actually bringing the headache back.  I recommend oversensitive people proceed with caution past that point, but go look if you can tolerate the buzzing just to remember why wars are stupid.  I think Josh may have been slightly disturbed along with the lighting being not great as I don't think there are any more photos from inside this gallery. The Army Museum is also worth a look if you're into that style of architecture.  I took a few reference shots but other than challenging the boys to work out what each building and each part of the building might have been used for originally, none of them were particularly interested in the architecture from an artistic/historic point of view and the girl was simply being sulky and just put up with my prattling.