Yeh I'm not doing the week by week anymore.

In addition to pocket money, daily bookwork is really good for basics when I'm sick or otherwise blargh from staying up too many late nights in a row and the kids are not (if they are sick they get to veg out and I try to get them to watch docos, we have recently discovered the TED Education Youtube channel and the kids have been consuming the snippets rabidly.  There are full lessons on the TED-Ed website but we haven't really explored there yet.  The animations are short (usually under 15mins) which is perfect for 5yo's attention span, and could potentially skim a huge variety of topics in 2 hours.  Just off the top of my head from passing they've watched clips on the Higgs-Boson field, icebergs, eel migration, vampire mythology, why glass is transparent and the Fosbury Flop.

The big two are doing research progjects on sharks and squids.  They practised library research skills with Daddy and got out shark and squid related books from the library and have otherwise looked up websites and watched numerous Youtube documentaries (mostly BBC and History channel stuff).  Both have diagrams of their respective animals and I scribed some notes for Tao which he is reluctant to copy like he said he would as he considers it "a lot of writing" and "more than roleplaying notes" and I'm having trouble getting him to realise it's not that much more, it's just that the notebook we're using has standard sized lines so my writing is smaller and also messier as I was writing faster than I write his roleplaying notes for him to copy where I'm deliberately slow with the letter formation so he can see how I do it.  7yo I haven't done enough with yet.  9yo and I have been reading Kraken by Wendy Williams (a non-fiction book) at bedtime.  It's interesting, though he still doesn't get that he doesn't have to wait til bedtime to read or be read to.  Hoping he'll cotton on eventually.

Otherwise our days are spent in the usual fashion of doing bookwork and whatever morning activities we have in the morning: 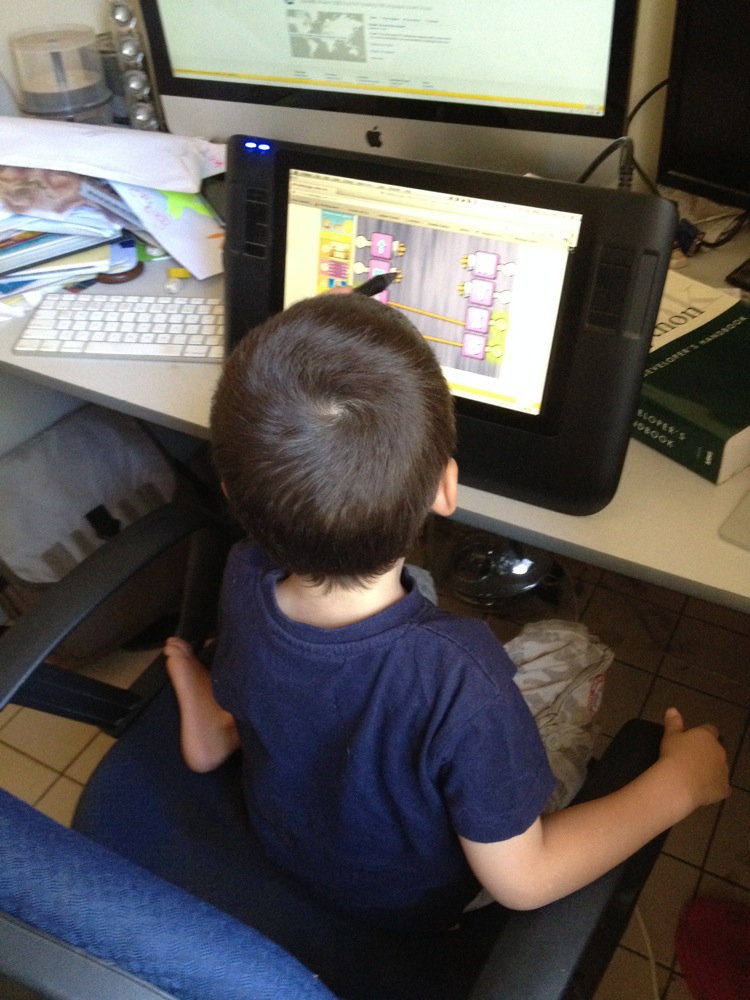 5yo playing Reading Eggs on my Cintiq 12WX, currently the only way to get him to play Reading Eggs (THE NOVELTY OF MUMMY'S FORBIDDEN COMPUTER!) as Reading Eggs doesn't work well on Debian Wheezy but Math Seeds does and that's his favourite 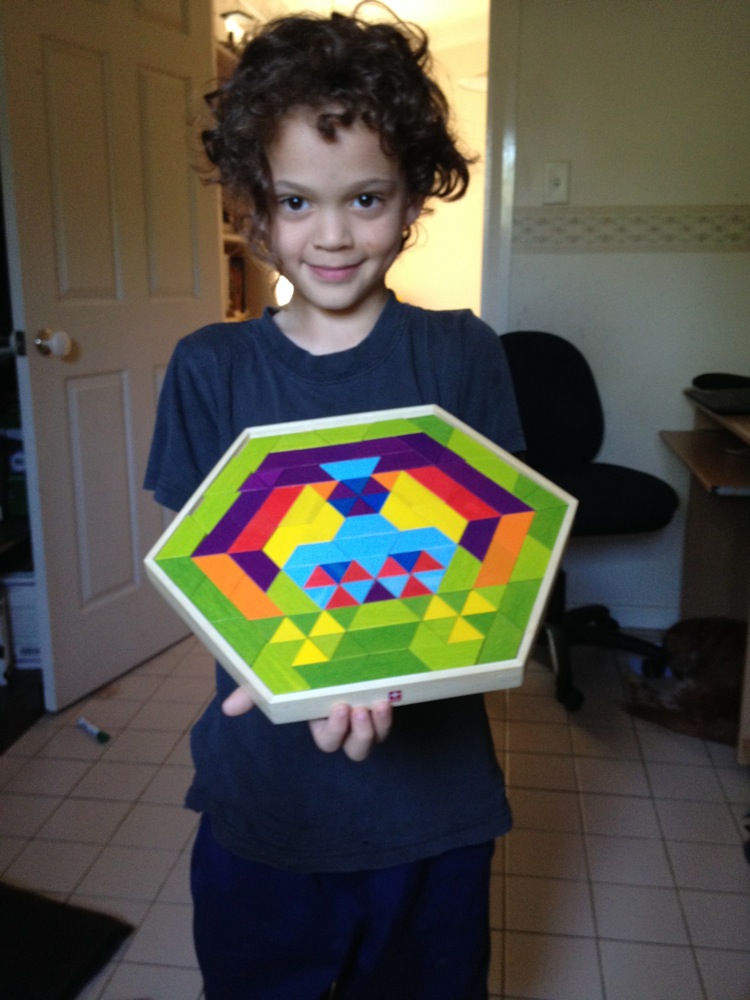 9yo with design made on his sister's bamboo tile board, doing physical art is a rare occurrence for him, he prefers Minecraft structures

followed by doco watching when Daddy gets home from work til bedtime, then it's bedtime stories.  As Tao occasionally has trouble settling he will sometimes read before going to sleep, and Ru has been drawing but has resumed actually going to sleep at a non-ridiculous hour now.

We haven't done roleplaying for a while as the homeschooled kids that were in the group with us are now going to school and we were waiting for them to settle in, then I had a busy period with work.  Once I work out what's going on we'll resume.

The first excursion of the year to the Aquarium of Western Australia on Feb 14 was a success, there were five families including us and everyone enjoyed themselves and learned heaps.  One of the things I learned is that AQWA won't do the extra activities for homeschool groups, only school ones, and at the time I was too confused to ask why (though later on I did have some fun spinning conspiracy theories).  We got the school group entry and the staff were amazingly helpful from processing at the door to helping the kids with Spotto, stamp finding and worksheets (and all the kids were doing different things).

The reactions of the kids the first time we went round the underwater bit was noisily awesome (kids screaming "WHOA!" and "SHARK!" "TURTLE!" "MANTA!" "FUNNY LOOKING FISH!" etc). 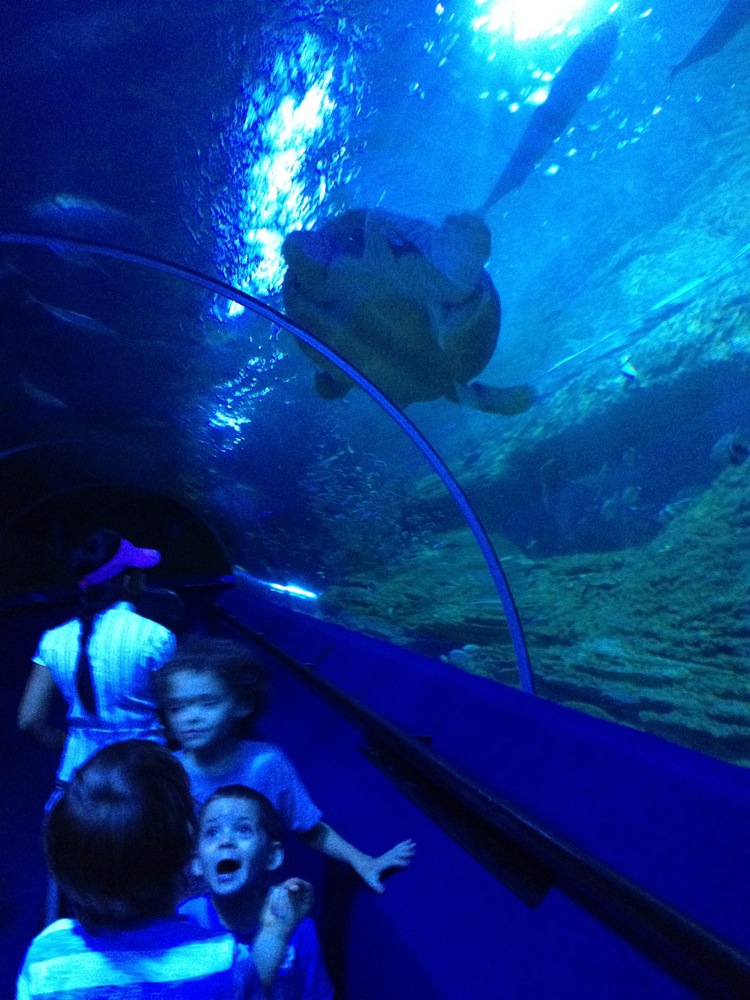 It was so cool we went around a second time immediately and then again before leaving.  There were lots of cool things, though I only got a few photos due to the usual (5yo). 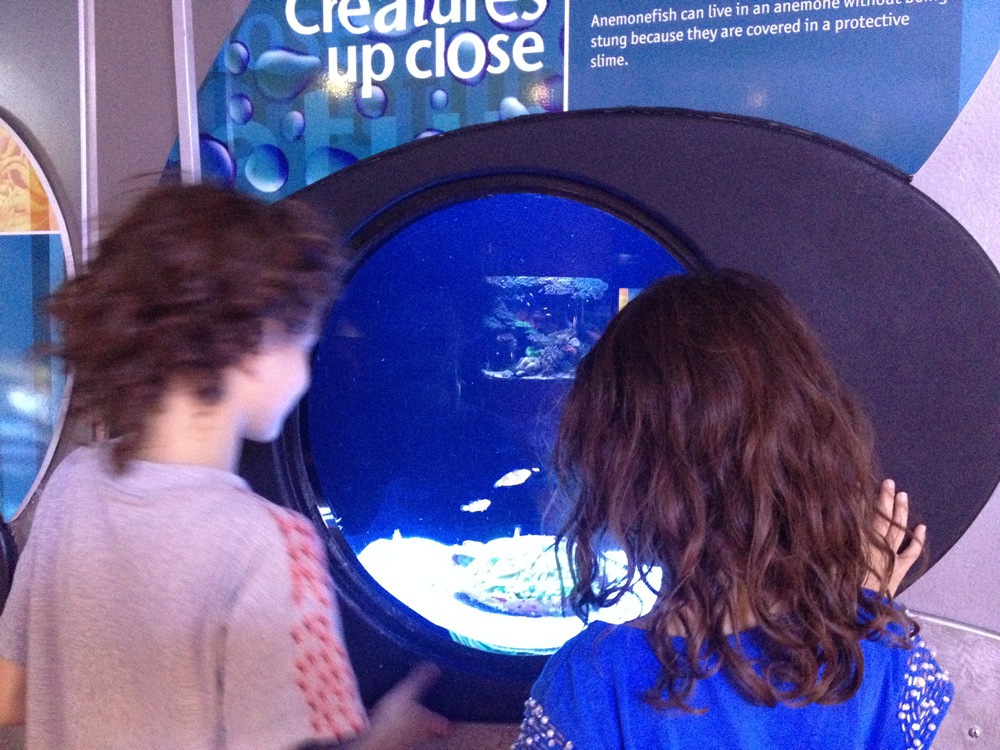 Next excursion is Wilkinson Homestead when it cools down, as most of their activities are conducted in a tin shed.  Might have to organise that one slightly earlier as last time I tried (and failed because I didn't know how to organise people at the time) at organising an excursion there they seemed to be quite popular.