While sculpting horns I was quite sure I was going to use Blender for all the sculpty goodness seeing as it had actually imported the mesh to begin with.  I think I'm going to have to accept the fact that my brain is never going to play nicely with Blender because even though I have been doing so much better than I ever have, I still don't understand it. 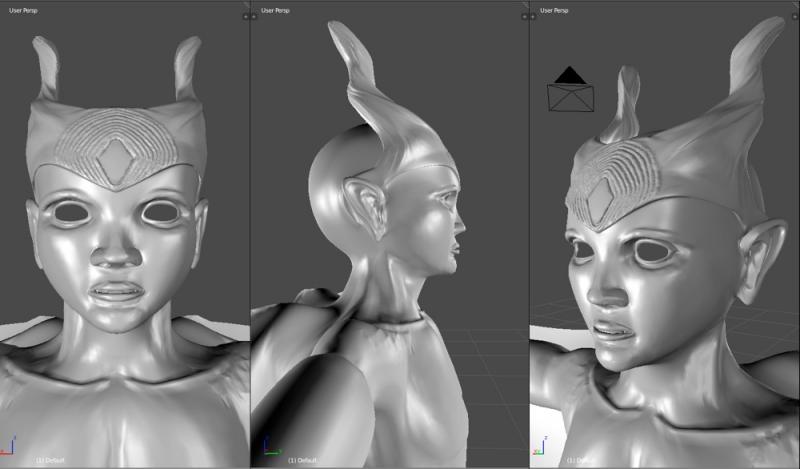 Very roughly positioned front, side and three-quarter view of the character in a window on the 21" monitor.  The actual work was being done on the Cintiq at close range.  The multiscreening is one seriously cool thing about Blender and I do miss it a little bit in Sculptris

I fell into a massive problem when while sculpting the top back of the horn crest and inadvertantly (because I misjudged the shadows) created a rather deep hole.  I forgot to turn dynatopo off while attempting to fix it and successfully created a black hole in the mesh, and I had saved at some point and haven't been doing versions because I'm an idiot.  While scouring the internet looking for some way to fix the mess the mesh had become, I stumbled across Meshlab which could reportedly fix various mesh issues.

I downloaded it and in the usual way of how I learn how to use programs, I imported the same mesh I'd originally imported to the Blender file (which lacked all the work I'd done in Blender), and clicked on everything that looked like it might be useful.  I crashed Meshlab numerous times and eventually wrangled the mesh into something Sculptris would accept.

My brain likes the Sculptris workflow better (really wish more work would be done on Sculptris) and I caught up to where I was before I got stuck in Blender in a few hours and got much better detail, because it does dynatopo much better. 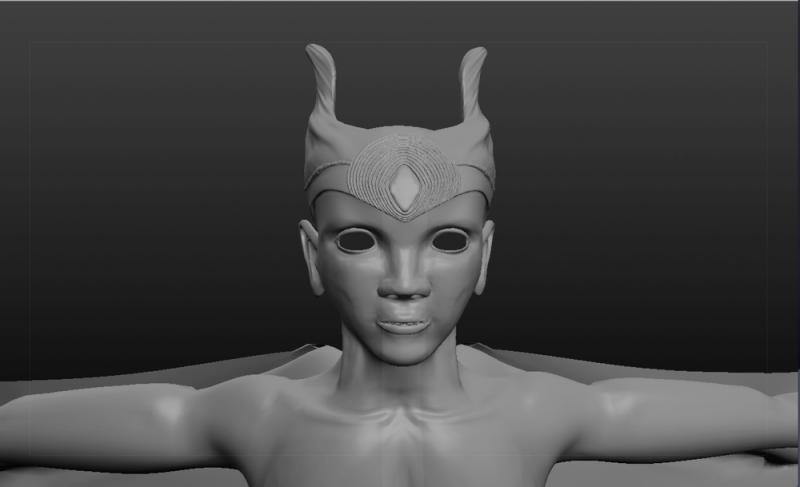 Yep, still stuck on this character, the detailing feels faster now.  Also, Sculptris is much faster and more responsive even at nearly half a million triangles, because this sculpting thing is pretty much all it does

As an added bonus Sculptris only operates on faces the camera can see so I was able to sit inside my model's head and work on the back of the horn without affecting the head, which I couldn't do in Blender.  And I really, really love that reduce brush.  Be a really useful thing in Blender next time someone has some time to implement it. 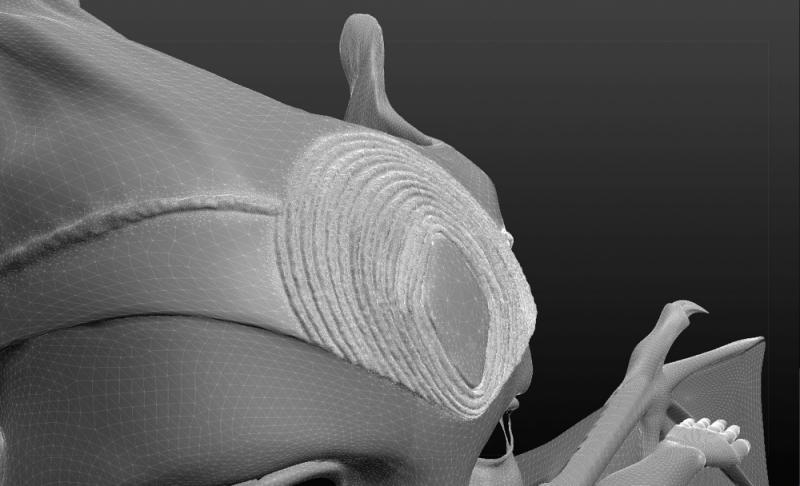 Not quite close enough to see the ones I reduced a little bit.  This screenie was 480something thousand triangles and I've since reduced it to 460something thousand.  Could probably reduce it a bit more but current focus is on actual sculpting.  Also, the wireframe shading is really useful, which was something I missed in Blender

So my current theoretical workflow is:

Will see how that plays out if I can ever get past step 3.