My suspected real life Crazy Dog House on the Cliff allegedly contains a museum these days.  For various reasons we've never quite manged to get to it.  Apparently neither have my parents, but as it turns out the opening hours are really awkward and you need to either be a tourist or taking time off work to go to it within the very short opening hours (Thursday and Friday 10-3).

Mum, the kids and I rocked up yesterday (Tuesday) and it was nice to see the place had been cleaned up a LOT.  Last time Josh and I were here we had wanted to explore the outbuildings, but they had been horribly overgrown and potentially hazardous so we'd mostly refrained. 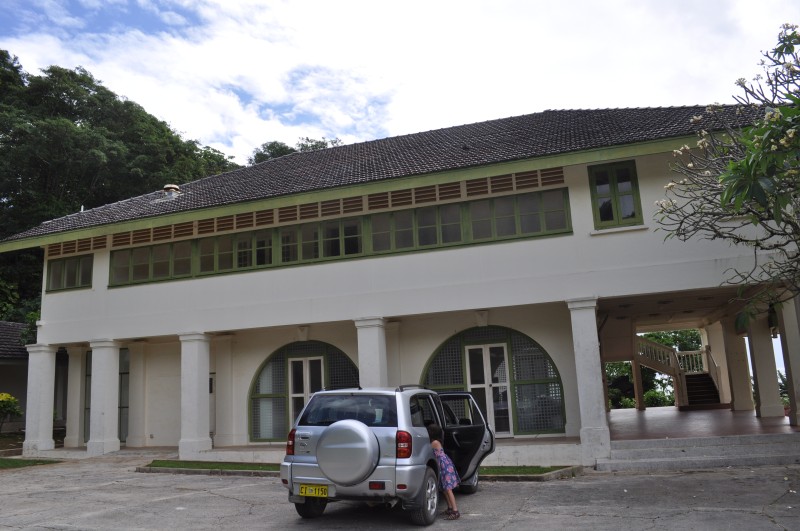 Tai Jin House from the carpark.  Large double carport to my left up the driveway a bit more (I'm holding the camera obviously), suspected servant quarters visible on the left endge of the frame

The big two remembered the cannon from the last time we were here so wanted to go see it again.  The cannon overlooks Flying Fish Cove, which is listed on the Wikipedia article on Christmas Island as both being the "capital" of Christmas Island and also known as the Settlement.  To my knowledge we don't have a capital (the entire island combined doesn't even constitute one single solitary city unless things have changed drastically since I did it in high school) and the locality situated on the Cove (which is a beach and one of two relatively safe docking sites) is Kampong.  Settlement is a lot further up the road.  At least the rest of the article seems reasonably accurate.

We investigated the cannon that was there and very briefly discussed World War II while we walked around it. 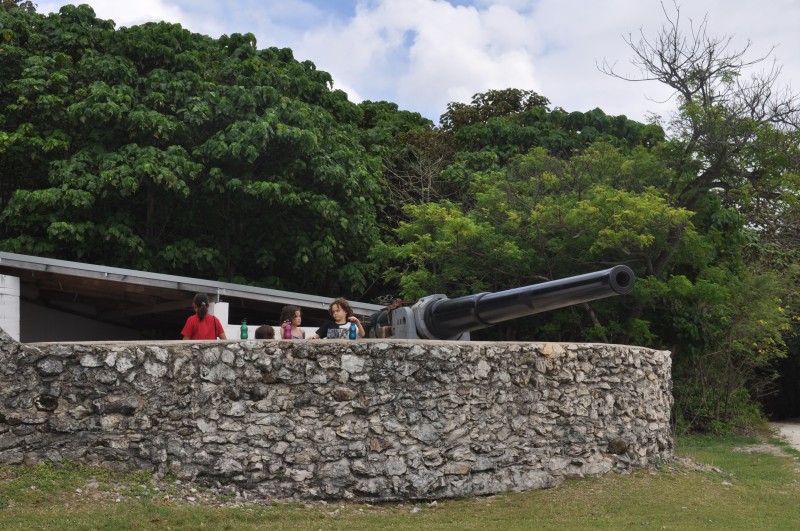 The cannon viewed from the front Cannon viewed from the back.  Tao examining it and trying to work out how it worked.  Oh look, there's a navy boat within firing range (which was probably the reason the cannon/s were situated here) 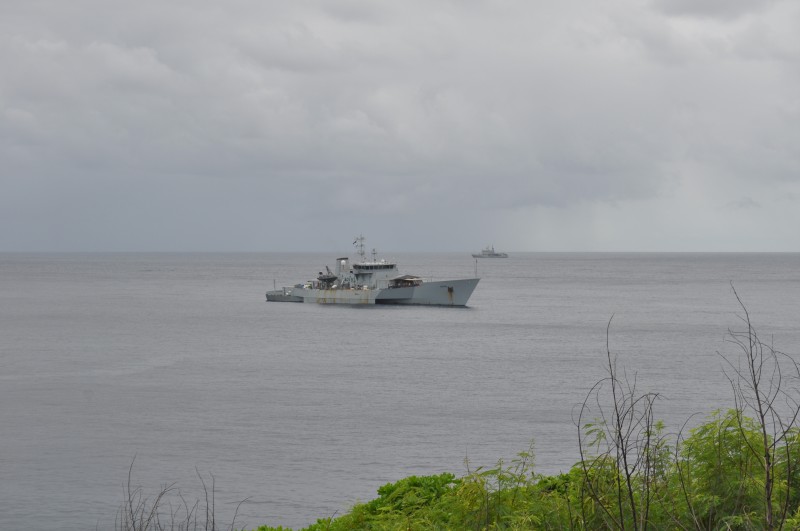 It's okay, it's one of ours.  So is the other one in the background.  Though seeing as at least some of them are equipped with things that could happily fire large explosives over the entire island I doubt a non-operational archaic cannon would bother them too much.  I was tempted to change to the 55-200 lens but didn't.

Tao and I explored some of the buildings behind the cannons (I did take photos but they are currently just plain empty concrete rooms painted white so I haven't bothered posting any) and speculated what they might have been used for.  Our popular hypothesis of mostly ammo storage and other cannon-related paraphernalia was backed up by Mum.  Behind the cannon buildings was this tiny little pokey thing with iron bars which we think was a jail cell. 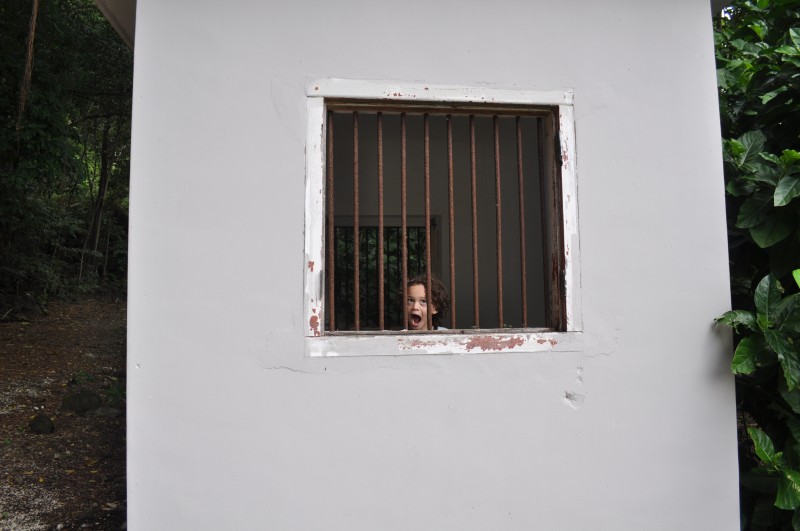 Tao in the tiny jail cell which is at my very rough guesstimate 2x3m (I didn't look up enough to guess the height but probably 2.something m, don't quote me on any of these numbers :P)

We followed the jungle trail to the left of the above frame up to the stairs.  Up the first flight of stairs was one end of the Smith Pt lookout trail, the other end comes off the Territory Day Park loop trail.  Again we opted not to take it.  At the top of various flights of stairs which staggered up the cliff was a lookout bunker type thing (it does have a name but buggered if I can remember what it is at the moment).  We didn't stay long partially due to the mosquitoes and mostly because the kids couldn't see much as the lookout area was very narrow and too high for them. Only siightly overgrown and kind of hot inside the bunker thing.

On the way back to the main building we investigated the cleaned up outbuildings that Josh and I had wanted to look into but were worried about the overgrowth and the state of the buildings themselves.  We figured that the outbuildings between the house and the cannon were probably for grounds staff (gardeners etc) and the ones behind the house were for cooks and housekeepers.

All of the houses were some variation of a room for lounging/sleeping in, a bathroom and a squad toilet. 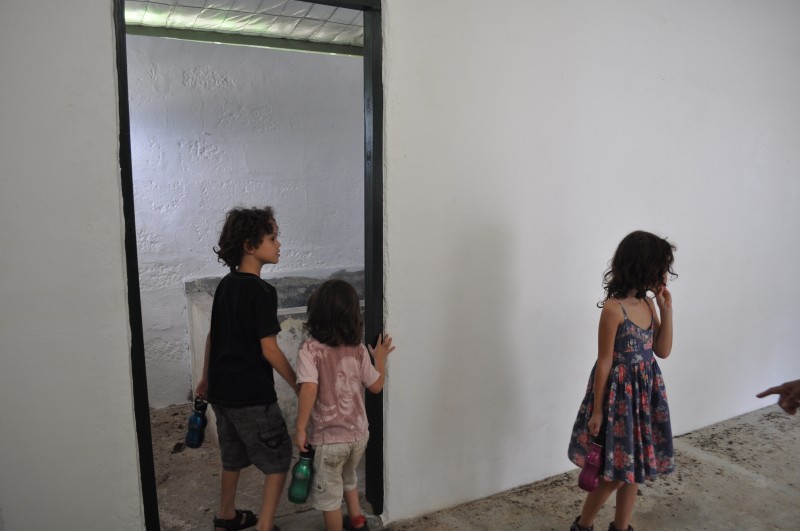 The camera and I are in a corner of the room left from the door.  The door the boys are standing in is a small bathroom with a large concrete tub Squat toilet through the bathroom

There was a kitchen/bathroom block that was probably shared by two of the outbuildings.  I didn't get a photo of the whole block because I need to get better at photo journalling (otherwise I would have had more photos of the layout of the outbuildings), but I did get the insides of half of it.  The kitchen/bathroom block mirrored though Mum said the bathroom I didn't get a photo of had a shower instead of a concrete tub. 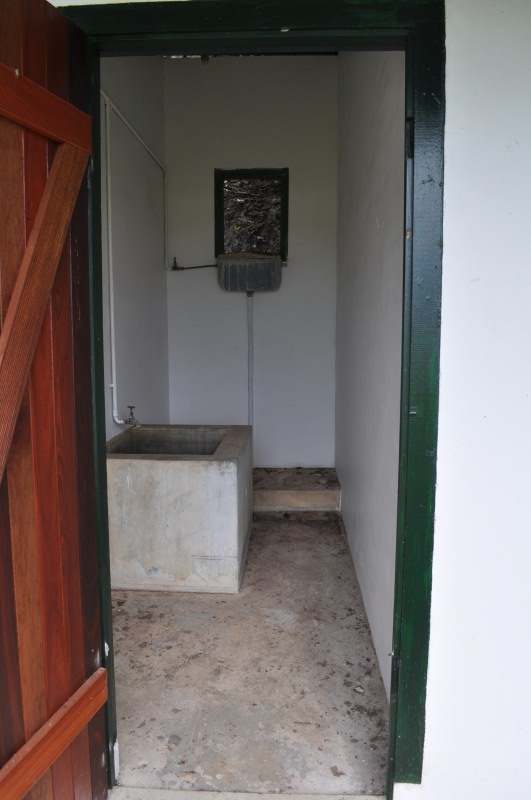 Ablution block bathroom with concrete tub and squat toilet.  Apparently the other one had a shower.  The doors are new and are simply latched from the outside, and the doorframes have been recently painted.  Not sure why the Federation colour combination, but I've never been a huge fan of white and Federation Green. 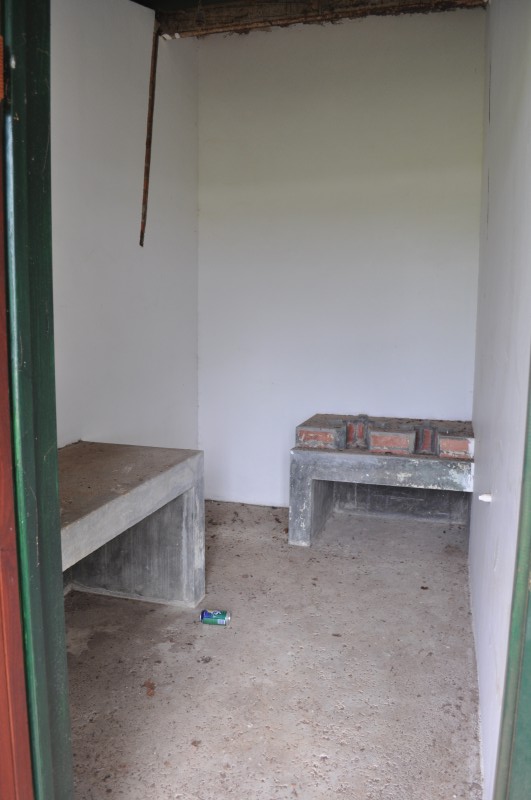 The kitchen next to the bathroom in the ablution block.  Two bathrooms, two kitchens with mirrored layouts.

There was one outbuilding that was closer to the house that had a little patio and its own kitchen.  We figured it was probably a "mando's" house (commander/overseer/thing). 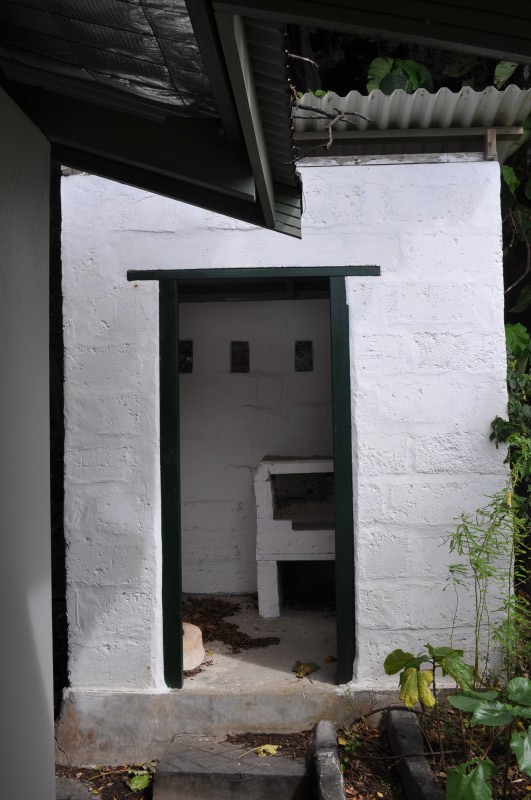 Josh always used to complain that the kitchen at our last house was too small.  He wouldn't have coped with this one which is probably slightly larger than a quarter of the size.

As we were walking towards the suspected servant quarters behind the main house, Tao said he thought it was rather unfair that the Administrator and their family got to live in the big house while the servants (and presumably their families) just got these pokey little buildings because no one was more important than anyone else and declared he never wanted to be rich ever.  I suggested if he ever became rich he could be a philanthropist like Tony Stark (Iron Man, fictional character, but one well known to the kids) and donate a lot to charities as well as trying to help people.  He cheered up.

The quarters at the back of the main house may or may not have been gutted but they comprised of plain interconnecting rooms in one long block.  On one end close to where we came from the outbuildings there was a toilet block: 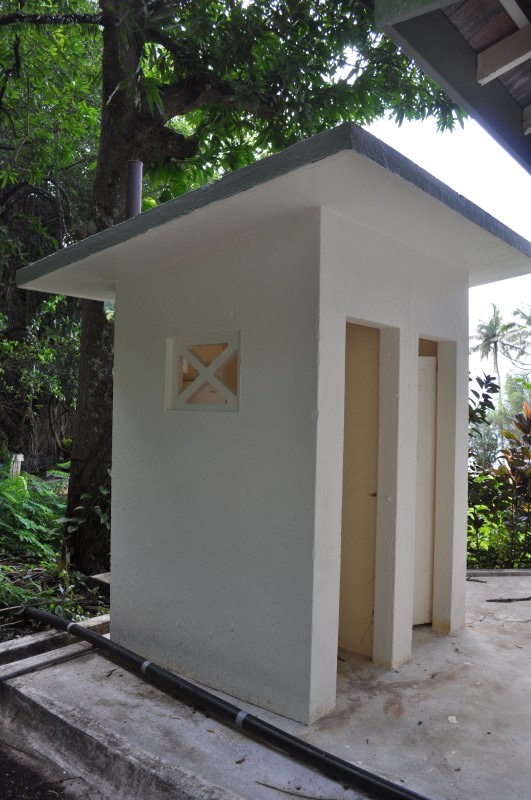 Each stall conains a squat toilet much like the ones in the previous photos.  Also spiders.

Behind them was another smaller building which may have been a kitchen or laundry or possibly both. 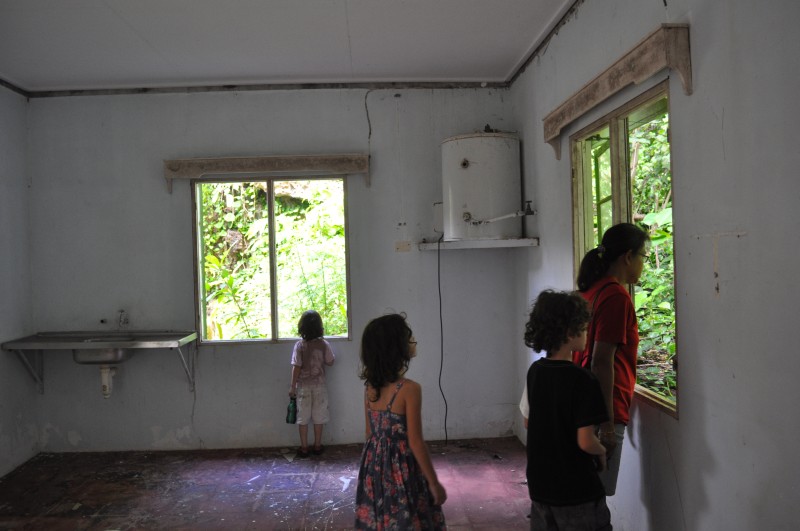 The above building backs pretty much directly onto the rainforest.  I don't know if this has always been the case or if the rainforest just got bigger.  There was a mystery alcove off to my left, I couldn't work out its purpose.

After working out the museum was actually upstairs (the grand ballroom downstairs appears to be getting renovated), checking the opening times and resolving to come back during said opening times, I decided Mum could play tour guide and that I was going to take running gunning shots out the window.  We got to the island's only traffic light and I spotted and pointed out a goshawk to the kids, unfortunately it shot off before I could grab my camera.  We discussed the two refugee boat memorials close to the traffic light and shortly after the light had turned green and Mum had started down the road when she suddenly shrieked something about not being able to drive, startling me, and as it turns out she'd just forgotten to bring her license (I'd driven to the place).  We swapped at the bottom of the hill and I drove home.

At home we discovered this excessive winter melon on the patio, dropped off by one of my parents' friends who had told my dad he was dropping off a watermelon among other things.  Mum jokingly told Dad to inform this friend that it wasn't a watermelon. 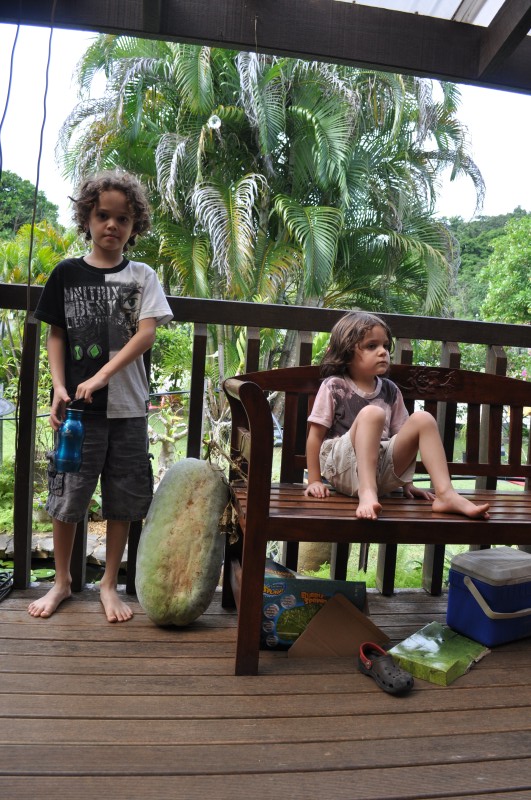 We went out coconut hunting and I stupidly forgot my camera like the n00b so didn't catch any cool photos of a temple we went to and the blowhole behind it.  My sister and I studied this tree some kids had managed to smash their car into and considering the location of it, I could not for the life of me work out how they'd managed to do it, so my current hypothesis is that they, like several (usually but not exclusively young male) drivers in Perth, suffer delusions of being rally drivers and otherwise don't actually know how to drive.  Dad hacked the coconuts we had managed to find open and we made two jugs of coconut milk (with myself, Sprat and all three kids consuming half the coconut flesh out of the shell and spooning the other half into the jugs). I had half a glass because it's touted as a "superfood" but I've never liked it.  Surprisingly, I seem to like it now.  The two jugs didnt last long, both are sitting mostly empty with just coconut flesh at the bottom in the fridge.

Cub was really tired last night and this morning and seems a little off so today might be a chillout day.  And I still have relatives to go visit after work which I have still managed to not get around to because other stuff keeps happening.