My head.  It's so full of stuff that I have a very mild persistant headache.  The cold isn't helping either, it makes my shoulder hurt.  I'm glad I don't live somewhere that's actually cold.

Following is a thought dump so I can work out what I'm doing and so anyone that cares can now know why techno was gone for the last month and why I've been in such a ridiculous distracted foul mood.

I'm currently using the Tor browser to write this as on my normal browser it and all my other sites looks like:

It's been like that more often than not for the last week, which is a vast improvement on completely dead which was what it was for the three weeks preceding.  For some reason the tables had been dropped and then I had to re-add the database user as none of the passwords it should have been were working.  I think I did get ip banned at one stage after the server requested/Cyberduck wanted to send the password a few too many times in a row during ftp transactions.  Not really Cyberduck's fault at any stage, I was distracted and kept forgetting I'd already pressed enter and took ages to notice that that particular dialogue was coming up too many times.  No more editing files on the live site with ftp is okay by me, just have to remember when all I need to do is change a password.

I've recently made a switch to a managed vps with my provider as shared/reseller hosting seems to just suck once you get a certain number of Drupal sites.  Unfortunately it didn't fix my email problems like I was hoping it would, but at least my sites are all up and working now (they were getting very flakey and intermittent before which was stressing me and Sprat out and not doing good things for our clients either).  I would love the power of the vps a lot more than I do if I could actually log into it (get the problem above regardless of whether I log in via ssh or web).

Hopefully these are just teething problems that will be resolved very soon.

I need to finish some ie hacking for one of my clients (seriously who voluntarily uses IE7- these days? I think we should up our IE tax), do some more work on a friend's client's thing, and after that I'm going to look into setting up a Linode and shifting techno and eventually Red Planet and WANLN onto it, once I figure out what I'm doing (I can do web servers, never done mail servers and this server security thing is a bit daunting, I only know how to do very basic commonsense stuff).  Then after that I'm roping in the friend whose client we're doing some work for into helping me with an e-learning system.

Not so very long ago, I thought it would be pretty cool if Lightwave's viewports could break out of the window so that I could have a textured perspective viewport on my 27" screen and be working on the orthographic views on the Cintiq.  I even thought about adding it to this Lightwave feature request thread running on the Lightwave forums, but vBulletin hates me (which is why I don't usually post on the Lightwave forums or SpinQuad).  Then I looked at what was on the request list for the next version of Lightwave, and they are all made by people that know a metric buttload more about 3d than I do, so I figured anything I said would be low priority at best.

Then I wondered if Blender could do it, because it was statistically improbable that I would be the only person on the planet that would want to do something like that.

Last time I tried Blender was a few years ago when I was trying to use it because I didn't want to spend money I didn't really have at the time on Lightwave 8.  After a week or so of poking at it and reading the documentation, I got exactly nowhere.  Lightwave on the other hand I had picked up in 5mins.  So I spent the money and have been happy ever since.

Seeing as Blender could do this thing that I wanted, I figured I would give it another crack.  I did better this time.  2hrs of poking at the (highly amusing) interface and skimming the documentation and I managed to work out how to subdivide the cube provided in the factory default setup and attack it with the sculpting tools.  I could not for the life of me pan or rotate in any direction other than up and down but I'm sure that was just because I don't use a mouse and need to set up my Cintiq to work with Blender. 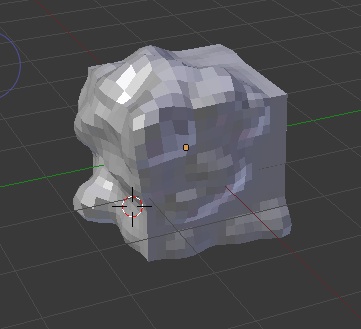 Yes,  I'm aware it's nothing special.  I really need that to be smoothed but couldn't find a setting to tweak at the time.  Hoping to set up the Cintiq and play around with it more on the weekend.

Saved by the IK Booster again!
ryivhnn v2
One 3d App to rule them all
3d-bek, now with eyebrows and face morphs!
What doing?!
Lightwave3D notes: fixes for base characters + clothes notes
Itsa meeee, ryivhnn!