Music session with Child's Play Music (and other things homeschooly) 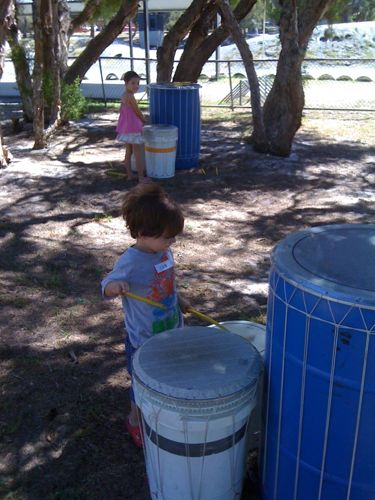 The most recent session at Natural Learning Co-op (formerly known as Learning Hub, apparently there's another group in the northern suburbs also called Learning Hub, and which I'll probably shortern to the last word as I'm lazy like that) involved a music session with Alec from Child's Play Music.  He had a huge van full of musical instruments that he'd constructed mostly from recycled materials.

Outside there was a large assortment of drums and gongs, inside were a couple of thongophones (one of them was kind of big), metallophones, stamping tubes and some amusing wind instruments.

To begin with the kids were split into two groups (minor inconvenience was Tao was in one group and Ru and Cub in the other which resulted in me skipping back and forth hoping the Clingy Cub wouldn't notice) and given free run to do whatever.  They were all quite happy to run rampant amongst the instruments and have a go at everything.

Cub was particularly proud of himself as he managed to play the hose trumpet, which is apparently a bit tricky for younger kids as they generally don't have the lip control required.  Tao managed it as well, claimed it was "the easiest one to play" though how he found it easier than hitting something is beyond me.  Ruan was the only one of my three to have difficulty with it.  There were a few older kids who really enjoyed the weird noises that came out of the hose trumpet and the balloon bassoon.

After the groups had swappd and everyone had had ample time to have a go at everything, it was back for another quick chat with Alec who then got everyone together with an instrument of choice to play in a "band" which basically involved the kids watching and listening as he conducted them to play (and they just played as conducted, not playing anything in particular), and very quickly explained technical musical terms such as crescendo, diminuendo, and of the other two one sounded kind of like pianissimo so I'm assuming the other was something like fortissimo.  He was very good, held the attention of the school aged kids with what looked like no effort.  More impressively (to me anyway) he had the attention of my toddler who also played louder and softer as instructed, where he would normally just bang and make as much noise as he could.

All the kids had a blast (and so did most of the parents!).

Tao's reading is progressing well.  We went to the markets on the public holiday and he voluntarily stood in front of the spice rack for 5-10 minutes reading labels just to work out what they were, and managed to decipher a slightly dodgily written "SOLD" sign in one of the shops we stopped by in my quest for more goggles.  He initially read it as "SOLO" and tried to work out why someone would have written a sign saying "SOLO" and put it on top of what looked like a pair of katanas.  He's become game enough to attempt the words and sentences that used to be "too long", this week asking me how to spell "mozarella" as we needed some for pizzas.  He helped set up the aquaponics system (photos to come when I get around to doing a post on the food garden), helps test the pH oh the water and I quite often hear Josh talking to him about physics and chemistry and him asking lots of (mostly) relevant questions.  His latest achievements are learning how to add up double digit numbers on the board by himself, and more recently able to do it in his head when they're not lots of ten, which makes him better at maths than me.

Ruan's writing is progressing very well.  Unfortunately she can't read.  She seems to know all the letter names and sounds.  She likes drawing the little dots in circles so keeps asking to do multiplcation but doesn't seem to have worked out how it works just yet.

At least one of them writes out the shopping list every week.  Tao has gotten good at finding any leftover packaging of an item, then finding the word he needs and copying that onto list (e.g he will find a milk bottle from the fridge or on the bench before it goes to recycling, find the word "milk" and copy that onto the list).  Ruan needs everything spelled out, but her writing both effort-wise and neatness-wise is on a par with Tao's (even if she does get them backwards once in a while).

Cub is loving Reading Eggs, and has embarked on the maps because he enjoys the animations.  I was watching him play (assisted as necessary by Ruan) and thinking that if they had gone the whole way through catering for 3yos no wonder my older two eventually got bored with the amount of repetition required in the later exercises.

I need to rearrange the house to get the pantry shelf back into the pantry, get a bookshelf for the dining room for the kids' workbooks and hang up all Ru's cool paintings and the other pictures and photos that need hanging.  And need to plan another trip to SciTech.