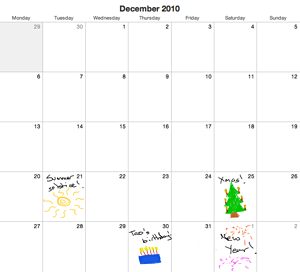 Seeing as I've decided to use lojban as the IAL for AEfter Ragnarok (easy way to facilitate communication between people who don't speak the same language; all people are strongly encouraged to learn their own culture, language, traditions etc first and foremost), I figured maybe I should have a "culturally neutral" (or something to that effect) global calendar as well.

The calendar reform article on Wikipedia had a bunch of links to check out.

The most popular types of calendar reforms seem to have 13 months with 28 days with intercalary ("leap") days and/or weeks to adjust for the fact the planet takes a slightly incomvenient slightly less than 365.25 days to potter around the sun.  The extra month tends to get grafted between June and July and called Sol or Luna.  One calendar called it Aten.

A lot less common (I've only managed to find one easily, probably would find more if I looked harder) were calendars based off varying the number of days in a week, like 6 Day Week, which advocates dropping a day from the week (they proposed Tuesday and gave reasons why) to make a 4 day work week with the standard 2 day weekend, 12 five week months of 30 days each and an Intercalary Period of 5-6 days depending on whether or not it's a leap year.

So, looking for a calendar that's either reasonably culturally neutral or at least flexible with the naming conventions and isn't going to blow my head up with implementation. 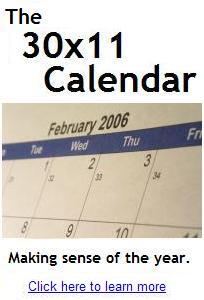 The simplest by far is the 30x11 Calendar.

All it does is make the first 11 months 30 days long (hence the name), and December ends up being 35 days normally and 36 on leap years.  If a calendar reform was going to happen in real life, this would probably be the one to get adopted as it would take the least amount of adjustment to get used to.  It retains the 7-day week and the 12-month year, and the familiar names of the days and months, it's just the number of days in the months that changes.

One argument against using the Gregorian calendar at all (aside from the seemingly arbitrary numbers of days in each month which makes a little more sense after a bit of reading on the history, reasoning and calculations behind it) is that it's not culturally neutral enough to be used as a "global" calendar, as it's based/heavily influenced by Christianity (though the name roots are actually Pagan and a couple of months are named after Roman emperors).

Enter something like The Ecliptic Calendar, designed as "a beautiful way of marking time".  The month names are changed to match the zodiac constellation most prominent in the night time sky at the time, there are still 12 of them, and years begin on the day of the Boreal Vernal Equinox (so guessing it would be  Austral Autumnal Equinox if you're in the southern hemisphere).  Each month comprises of 4 weeks of 7-8 days.  It's based on celestial movements of the planets around the sun and and can apparently mark large spans of time.  I don't know how large "large" is, the timeline I have for AR goes from 2009CE - 4199CE (though I do an era/epoch change somewhere in between to get AR) which ism't that "large" in the grand scheme.

One thing I found slightly crazy was the date notation, in that there are two extra numbers numbers; in addition to year/month/day following ISO 8601 they also include "age" (named after the signs of the zodiac and spanning ~2150 years, we're currently in the Age of Aquarius) and "saturnium" (span of 29-30 years which is about how long it takes Saturn to complete its orbit).  Good for historians and archaeologists and the like that work in massive time spans.  I suppose one gets used to writing in whatever format they get introduced to and work regularly with.

What I quite liked about the Ecliptic Calendar was "Ecliptic time" which starts the day at 6am "Apparent Solar Time" (described as "pure sundial time") rather than midnight and progresses in "dihours" (twice the length of normal hours hence the name).  At risk of breaking the calendar mashup, I think I really want to use this somewhere.

However I'm not keen on variable length or intercalary weeks.  I'm going with ease of use and minimal headache while converting here.

Next stop: the Tranquility Calendar, which I first heard about on the Lojban Beginners mailing list.  Instead of using the birth of Christ as it's origin point, it uses the first known human moon landing on 20th July 1969 (or 1969 07 20 if I want to be all ISO about it).  "Moon Landing Day" is kind of a zero day and isn't part of a week or month.  The actual "zero" is when the word "tranquility" is mentioned in the transmission "Houston, Tranquility Base here, the Eagle has landed".  I don't know how "culturally neutral" it is but I liked that it named its months after scientists and in alphabetical order.  There's an extra day called "Armstrong Day" that falls on the anniversary of Moon Landing Day and also isn't part of any week or month, and a leap year day called "Aldrin Day", also not part of any week or month.  Going backwards and forwards from this date is pretty easy.

theAbysmal World Calendar is the most extensively worked and documented one on the list, and also has the coolest looking calendar.  And because it looks like it's trying to cover every observation one might want to make regarding time passage (moon phases, where planets are in what constellations at what stage, equinoxes etc), there's variations for northern and southern hemispheres so it gets bonus points (the illustration is their southern mandala). 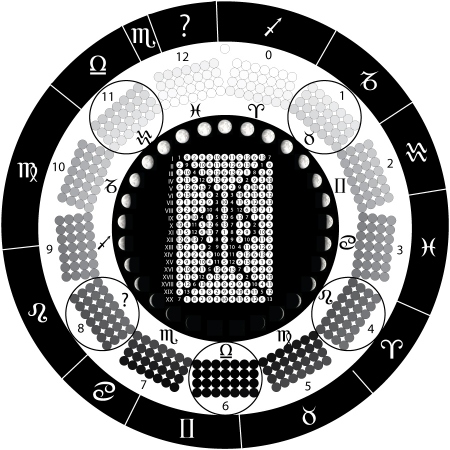 They're aiming for their "year 0" to be from the 21st of December 2012CE to 20th December 2012CE, so my guess is picking up from where the Mayan calendar left off.  At a very basic level, this one also operates on 13 months of 28 days in a year.  It also "allows for for the naming of days, months and so on as suits each culture" (the Case for Calendar Reform, Section "Addressing these points in kind, allow me to retort", point 4).  Very useful.

For the purposes of I'm editing (and drastically expanding) my notes (which aren't nearly this long, the datetime section in my notes is only about a page long) for the blog, I probably need to specify that the pros and cons I'm outlining are ones I'm perceiving in the context of using it for AR.  It has no bearing on the quality of the actual calendar proposals (I think they are both very good and would like to see one or both adopted for real world usage but that's unrelated) or on the real world as the block I'm currently working on is set in in 4199CE.

It feels like a bit of a stupid disclaimer but the last time I blogged notes on the mental process I went through in picking lojban for the IAL (my own mental process, there is also a canon that's cropped up as to why it's lojban over any other conlang) on the now deleted livejournal, I ended up with a random pile of people angry about the fact I'd gone lojban over Esperanto and one declaring that I should just use English as the IAL because all conlangs were stupid and would never take off or something to that effect.

It's not that much of a mash, really.  I'm going to use theAbysmal, use the months of Tranquility, and the visible spectrum with the colour names translated into lojban for "global" use.

Where I'm hoping it won't break is that I want to use Ecliptic time which starts at 6am instead of midnight, and theAbysmal seems to really like starting from 0.  I suppose civilians could use Ecliptic time and military and science and anyone wanting to use a precise time scale can use theAbysmal time.

Now of course comes the fun part of trying to work out theAbysmal date notation and converting all the AR dates to new calendar format :)