Cub loves being read to, and is constantly bringing books to us and demanding "Wead book!" 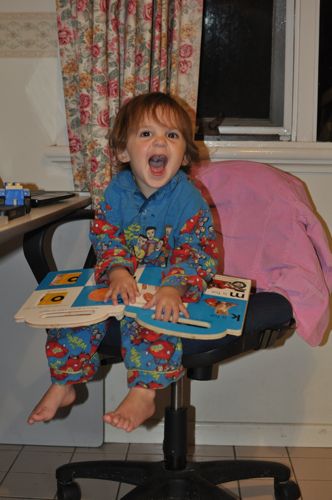 I can also say "duduk" to him and he will sit down.  All three kids understand "makan" and "bagus" (Tao used to pronounce it "ba-goo-doos" when he was Cub's age :) and that's as far as I've gotten with Malay; my vocabulary is shocking and grammar non-existant.

He's often sharing that chair with Ruan while she's playing Reading Eggs on Josh's laptop.  I'm sure he benefits.  Ruan has been a bit of a quiet achiever lately, she's been playing Reading Eggs a lot and I know she occasionally does the maps to get more eggs so she can play games and "buy" stuff for her character and house, but most of the time when I look in on her she's in the playroom section.  So it was a complete surprise to me when I overheard she was up to the quiz at the end of the first level.  Next thing I knew she had passed the quiz and is now on Map 2.

Tao appears to be a lot like me (poor bugger) and rather than needing to do things every day, or be relentlessly pushed to practise because it's the "only" way he'll improve and develop, he just needs to do it in his head first. 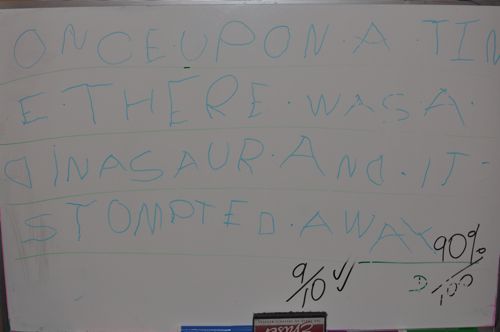 Once it sorted out in the head, it's much easier to practise and develop.  Forcing the issue is guaranteed to cause meltdown and make the process take longer.

He's teaching himself multiplication and division with me bumbling along trying to work out a way to explain it to him that he will understand, as well as trying to teach him to count on rather than always counting from one when he's manipulating numbers.

I've been trying to source some of those coloured plastic counters for him but I keep managing to not find any or forget to look when I'm at a shop that has a prayer of having them somewhere.  Today I was hit by the blindingly obvious.  He collects bottle tops.  Sorted.

Meantime, I really need to fix up WANLN as one of the things it was supposed to do was have a glorified blogging capability to be able to blog homeschool related stuff among other things.  I have a new pen now so not much excuse not to be taking notes in the diary again, and I really, really need to take more photos for the blog and do more of that.  Speaking of photos, I was standing over this at the train station today. 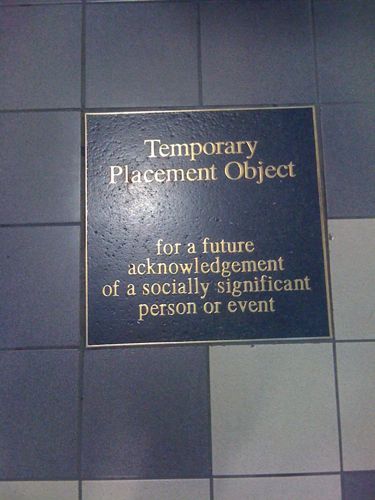 There have been TPOs at the Perth traino since I was in highschool, I love them. It makes sense, you know, there's bound to be people achieving awesome things in the future, but at the same time it's ridiculous. Surely they could just stick a blank tile there. Blank tiles don't have the same amusement value though...

We so can't do the reading/writing thing everyday. Asides from the practicality of it (we have full on lives do we not?) DJ also goes into the meltdown mode. Thankfully I've worked out 10 minutes 3 times a week ( spaced out evenly) has given us the balance we need, however I stress that it may not be "enough" for the moderator. I'm taking heart in that DJ is actually enjoying the process of learning to read, as opposed to dreading it/getting upset because he can't do certain things. Finding that balance is so important...surely the enjoyment of reading/writing is just as important as how fast they "climb the ladder"? xxx