I've been lusting after one of these since shortly after they first came out.  This year, I finally had to retire my beloved Intuos3, partly because it was getting laggy and jittery in its old age after much use (it was a wedding present, wedding was 6 years ago), and partly because my toddler walked off with the pen and I haven't seen it since.  Following was angst over whether I should take the cheap simple upgrade to the Intuos4 or splash out and be broke for a while getting a Cintiq.

Seeing as it was a "milestone" birthday (3 decades!), Josh, my parents and my sister pooled together and threw some money at me so I could acquisition the 12" Cintiq.

I'd read many reviews of the thing prior to committing to the decision to purchase one, and one of the things a lot of the reviews had in common was the size of the box.  So I was prepared for a big box.

It was a big box. 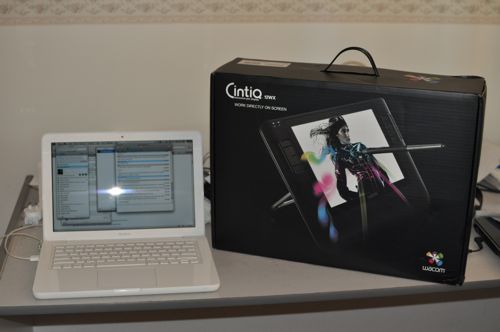 It's sitting next to my 13" MacBook for comparative purposes.

The second thing a lot of reviews had in common was the reviewer being stunned by the size of the "massive" brick that ships with the Cintiq, and the amount of cabling involved.  Being a display as well as a tablet, it plugs into the computer with both the standard usb and also to the graphics card.  If you have a Mac, especially of the MacBook variety, you need to buy yourself a DVI to mini-DVI converter if you haven't already.  I had to do a mercy dash for myself to Carousel to NextByte to get one so I could use the new toy after setting it up.

Anyway.  The brick.  People were commenting about the size of the brick, many saying there was no way the Wacom could possibly be portable with that thing attached.  I'm not sure what they were on about, the brick is twice the size of my iPhone which was a smaller than I was expecting. 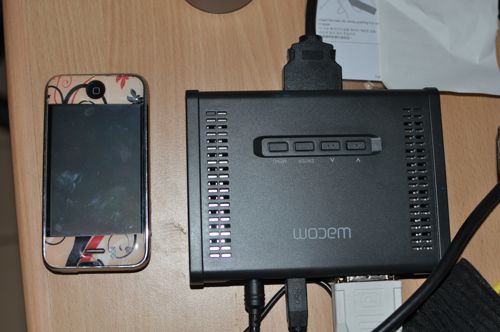 The big chunky plug at the top of the photo is wired directly into the Cintiq.  At the bottom from left to right is power, usb and display.  All the cables are pretty long so I have had no dramas whatsoever moving the Cintiq around into various "more comfortable" positions depending on what I'm doing, which is mostly swapping the positions of it and the MacBook and occasionally having it resting it on my lap and even more occasionally spinning the thing around to colour from a more convenient angle (not done often due to the fact I do actually use the touch strips and if they end up under my hand when I turn the tablet, funny things happen).

The wires are a bit of a snarl mainly because they're long.  The length is good as it makes it really easy to shift things around where you want them, but bad because when your desk is like mine they get tangled in everything including each other.

The Cintiq itself is a little bit bigger and thinner than my MacBook.  It's quite light and easy to carry around, so very "portable" in the sense that I will be able to shove it into my STM backpack and take it and its snarl of cabling along with the MacBook to wherever.  No dramas, but maybe I'm just oldschool enough to remember carrying chunky desktops with equally chunky CRT monitors around the place for LAN gaming.

I think what some people were expecting with "portable" was that, like a laptop, they would be able to use the Cintiq anywhere and everywhere, like at the local coffee shop.  There were some complaints to that effect includng people wondering why the Cintiq couldn't just run off the usb like the other tablets.  It may have something to do with usb ports putting out 2.5W (I think) and displays needing to draw upward of 20W.

Which flows on nicely to my work setups.  I recently moved to using my MacBook has my primary machine as my almost 5yo iMac has started slowing down.  It losing a Gb of RAM didn't help and made modelling and rigging painful and animation excruciating.

I rearranged the desks so I'm on Josh's desk with all my books on his deskshelf and the laptops have been put on my huge white desk.  When I am in webmonkey/scripting mode the Cintiq is an extra monitor. 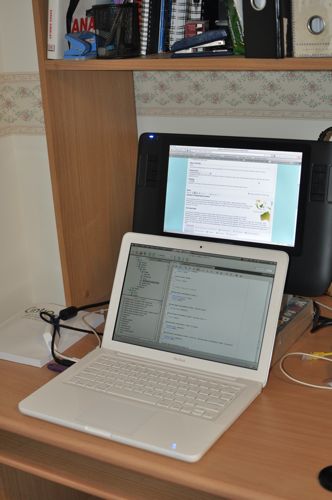 It's propped up on a couple of unopened White Pages.  We do not use phone books except occasionally as doorstops.

When drawing I swap the two around. 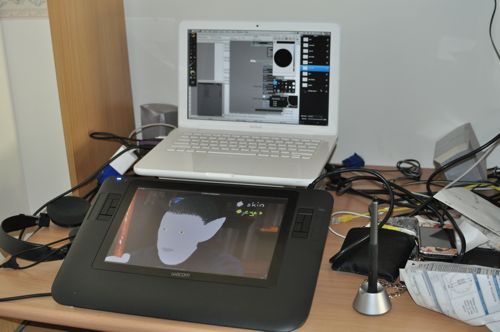 Here I am working on the fully dodgy qad concept I did of Gnarus specifically to play with the Cintiq the first day I had it.  I'm using a program called Pixelmator, and behind it are some panels from Lightwave3D on top of NeoOffice with one of the scripts.

A few reviewers had commented that they found the 12" too small and wish th they'd gone for the 21" version.  I'm quite content wth the size as I draw from the wrist and it's the same size as my Intuos3.  People that draw from the shoulder will be happier on the 21".

There was one reviewer who got so into the flow with their Cintiq that they automatically wiped non-existant eraser bits off their screen after erasing something. I had a giggle at that...and then went and did it myself more than a few times while working on the character development sketch for Starzone/Zara.  Karma ;) I've modified the habit to brush dust off the nib and screen as I'm paranoid about it getting scratched up.

I love using the thing.  It's very smooth, there's a lot more glide than with my Intuos3, which I think might have something to do with the surface of the Intuos3 is some kind of plastic and I'm drawing on glass with the Cintiq.  I don't have any issues with the gap between the end of the nib and the drawing (though it spins my 4 year old daughter out a little for some reason, considering she was using a tiny little Graphire with ArtRage before I reclaimed my laptop) and the reported jitter when you get close to the edge of the Cintiq screen has been minor, I've only really noticed it when the pen is toggled to only work on the Cintiq or when I'm trying to resize a recalcitrant window.

I'm not sure about 40-50% in productivity as I've read reported about the place but I did feel like I worked a lot faster when working on the Starzone/Zara sketch.  I take a very long time to do anything, so going from sketch to outlining to colouring in the space of 2-3 days was quite fast for me.  I didn't think the mental/psychological gap I'd read about between using the Intuos3 and using the Cintiq would be anything worth mentioning but in my case I did notice a difference.

It made Lightwave a whole lot better too.  Previously I'd only ever worked in the orthogonal views as I tended to make a right mess in the perspective views if I tried to push any points around there.  With the Cintiq I found myself working just as easily in the perspective views.  The only problem I've encountered so far is here, as Lightwave for some reason is completely ignoring its program-specific configuration.  I know it's a Lightwave problem as problem does not occur with Pixelmator.

The only other problem which is less a Cintiq problem and more a user problem is that I still can't 3d with one hand :)

Definitely worth the price tag, and hoping I get at least as long a life from it as I got from the Intuos3.