We had our initial visit yesterday, with the next one scheduled for another couple of months.  Everything went pretty much as expected.  The lady was nice, and was happy with all the learning areas except for English and maths, and also wanted to see more "scientific communication". 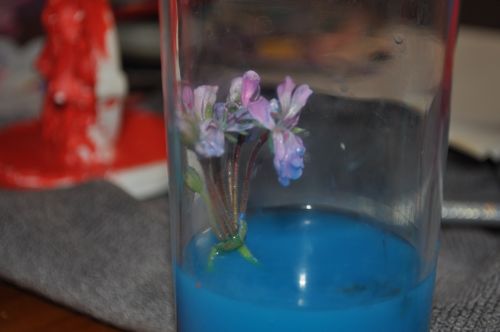 Tao and Ruan set up an experiment to turn a flower blue, directed by Tao, who had seen a demonstration on some science show on ABC.  They made the blue water with paint and water (as we don't have food colouring).  They then went on to do some other arty crafty thingies while they waited for the colour to be drawn up to the flower.

I had nothing to do with it.

Why did I have nothing to do with it? I believe I was working at the time, and the kids are good at entertaining themselves in the couple of hours during the afternoon that I snaffle to work.  My two working half days are deliberately timed to be when we have morning activities planned so the kids are usually quite ready for a couple of hours staring blankly at the tv or napping for a couple of hours, so I usually get 2 of the 4 planned hours done in the afternoon and manage the other 2 sometime at night either after dinner or after getting the kids to bed (or at least ready for bed, sometimes they watch tv til I go to bed).

Sometimes they are not so worn out from the morning's activities and will play either in their rooms or outside.  They were running around outside which is not unusual.  I was keeping an ear out but completely did not expect something like this.

In the interests of "scientific communication" what I should have done was gotten Tao to write up the experiment afterward, just a diagram and a few sentences is all that's needed at his age, apparently.

What I would have done if I'd had a clue what was going on and hadn't been working was talked through setting it up properly (maybe with a few different colours, with a control in plain uncoloured water) and then writing that up with diagrams.

Thing is, back in those days (all of about six months ago or so) he wasn't so confident on the reading and writing thing, and would go to pieces if asked to read or write anything.

It will probably come up again at some point in the future, or we could bring it up again.

So apparently we need to do more "proactive development" with the reading and writing and cover more maths related stuff.  Because "the department" is extremely keen on "literacy and numeracy every day".  She made a few suggestions, including using Maths Online.  It's for Year 7+ (which are 12 year olds).  I'm half tempted to show it to Tao to see if he can do it.  I think she might have been a tad concerned that I was not concerned.

Still, it gave me a good excuse to suggest he have a look at Reading Eggs again.  He'd stopped playing it months ago as he said it was boring.  In the intervening months the Reading Eggs people have slotted in more games and maps and things (as far as I can make out) and Tao is interested again.  And so is Ruan, who is happily back in the nursery and occasionally venturing out into the maps to earn more eggs to play more games.

As I suspected, and proven when he picked up easily toward the end of Map 7 where he'd left off however long ago it was, Tao can actually read.  Not only that, he managed to get his first perfect score on the quiz (or "twiz" as Ruan would have it).

I really should try to get on with those journals I want to do with the kids but haven't yet found a way to squeeze into the pattern.

Eeek, moderator visits scare me and we're years off them still.
I have bought notebooks to keep a journal of our day-to-day incidental learnings in the hope I can provide evidence of meeting the key learning areas but I haven't written in them yet. I knew it'd take me a long time to get into the habit, which is why I've bought them so many years before I need them...

I like that experiment. It's a shame "the department" expect it all to be written up, it's seems a bit fun-killing and unnecessary to me.

I reckon I'll set myself the challenge. I definitely have control freak tendencies so I may well succeed! I'm not as relaxed about ANYTHING as you are, as much as I'd like to be.
This unschooling thing is a HUGE learning curve for me. An exercise in letting go. Perhaps if I can be all control-freaky over the record keeping I'll cope better with not being control-freaky over the direction the learning takes!

She made the exact same recommendation to us regarding the maths, of course , there is no way that DJ is going to do yr 7 math. We may have another look at the reading eggs thing as well, DJ found it too slow and boring...but if they have changed it a bit he might be happier with it? Love the experiment :)