Rightio then, this work thing

Recently I had the very interesting experience of being head hunted.  I have a LinkedIn profile, and the headhunter fell over me while searching for Drupal in the Perth area on aforementioned website.  Apparently he was amused by my title (Shaolin webmonkey (Drupal style)) and sent me a message asking if I was interested in a Drupal position with a huge company, year long contract, possibly longer, with possibility of going long term with maintenance.  He didn't mind that I don't do custom modules, know exactly enough about SQL to convince it to work but no more, and only work 15-20hrs per week tops, and only go in once a week.  That is progressive.  Flexible working conditions benefit everyone.

I'm part of a team (they're quite fun to work with) working on a decent sized ERP.  I foresee many challenges and learning opportunities.

Nothing visual to show yet, unfortunately.  I still haven't finished timelining.  I'm in the last episode, which has been reordered, had one scene cut and two rewritten.  Finding out a lot about the Flier justice system, not that there's a lot to find out as it's not that complicated.  After that I can continue with the reformat/rewrite and MOAR 3Ds!

Writing templates to make things look prettier.  Figured I can make the Events visible to certified humans only as a temporary measure while waiting for Taxonomy Access Control to catch up.  Still need to make listings for blogs.  Article listing is done and I don't think I need to do anything with the node template (though can if it needs it), there are currently no articles.

Lots of other stuff to do, such as the activity record thing and sorting out family account link ups and other fun things.

Um...yeh.  I still need to do a module review, and I still haven't, purely because it is A Big Job (tm) and I will need to be able to sit down and do it without getting constantly interrupted because it's obviously not important at all because I'm not getting paid for it.

I'm not sure about the upgrade paths for a few of the modules that do have D7 versions and I may need to redo some things.  I will be rewriting the theme from scratch and I'm wondering if I can get away with just making the partially transparent red background in the current theme a light reddish pink tinge and make the body content dark to avoid having to do an entire light on dark theme, or whether that will just look silly.

Quite a lot been happening.  Josh hacked down another tree with both big kids yelling at him as they didn't want him to (Tao telling him off about how trees also have feelings and the tree wouldn't be too thrilled about being chopped down, Ru crying because apparently it was her favourite tree, though she's said that about every tree he's removed so far).  The removal of that particular tree should mean that two of our fruit trees will get a bit more sun, they were being overshadowed by the skinny but tall tree Josh axed and the massive tree in the front yard that we all love.

Josh has planted some herbs and rigged up some chicken wire to protect them.  The chicken wire was originally straight across the top of the planters, which did not prevent the taller chickens from standing there or the bantams perching on the edge pecking at the tasty, tasty leaves. 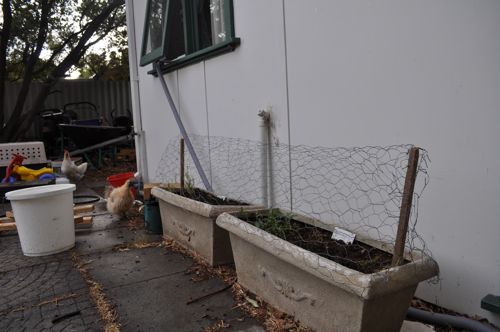 He also planted winter veges in our patch. 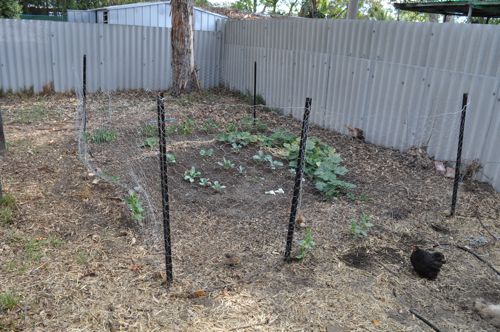 If you look carefully inside the chicken wire you might be able to make out the Japanese bantam cross chicks in there eating the grass shoots and insects.  If you can't make them out, the black Pekin bantam (their adoptive mother) is looking at one and the other is right in the middle of the two gate posts.

We're planning a sizable raised bed for a clear area in the front yard, and Josh has the aquaponics for the backyard planned.

It would appear that our clutch size averages at 2.  Chess started out with 5 chicks, raising 4 herself and the last one was adopted by Tempest.  Two died, one from stickfast flea infestation, the other from being crushed by an exuberant baby after being weakened by stickfast fleas and slowly recovering.  The other two are kicking along great.  Fleck is a standard size Naked Neck cross Rhode Island Red cross Malay game (we think the reds we have are RIRxMalay game), think it's almost full size and we're waiting on it to start laying or crowing).  Really hoping it will lay, the bottom hackle feathers appear to be rounded but the top ones are pointy, although I've noticed that on all our hens except the Leghorn cross. 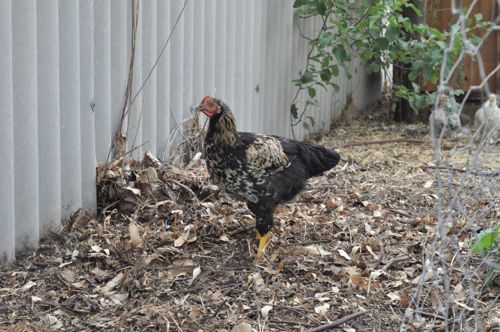 In the background is Chess on the left, the psycho Pekin mother, and next to her is Powderpuff, whom we suspect is a Pekin cross Leghorn cross bantam.

Tempest hatched 1, adopted the reject from Chess and we grafted another 5 onto her that we'd gotten as siblings for the orphan.  All died.  We got her 2 Australorps and 2 Naked Necks, of those the smaller Australorp and smaller Naked Neck died and after adopting and caring for the other two for a little while she eventually chased them away. 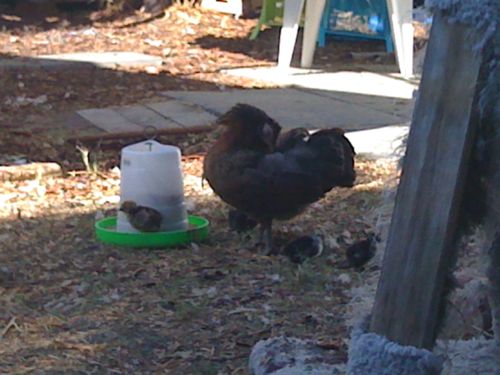 We had them for about a month and then they dropped dead one after the other.  We have no idea why, and wondered if they just got too cold and Billie was unable to keep them warm, whether she was just an inexperienced teenage mum and couldn't take care of them properly, it being her first clutch and her being a nervous, flighty chicken, whether they got sick, or what.

Tempest went broody a week after Billie but none of the eggs she was sitting on hatched, so Josh picked 4 Japanese bantam cross chicks to graft to her.  Two of them died a day apart a day or so after being grafted. 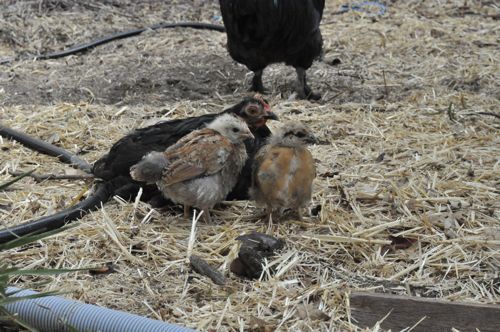 These two however are going strong, and I don't know why but I've randomly fallen in love with the breed.  I told Josh I wanted to breed more-or-less purebred Japanese bantams in that colour, except that I would ruin the standard some as we would breed out the lethal gene which would result in long-legged Japanese bantams and the standard wants them short legged.  Good thing I wouldn't be showing them.  Josh however has cited all sorts of problems with both of us breeding chickens simultaneously, even though I don't really foresee any major dramas (unless I happen to end up with the world's loudest bantam rooster with the world's biggest case of small chicken syndrome).  I think he sees problems with his rooster/s mating with my hens and thus me ending up with crosses where I want more-or-less purebreeds, whereas I don't consider that a huge drama as it's not like I'm breeding them extensively to show and sell, more for entertainment.

Japanese bantams would be easier for me to breed alongside Josh's breed development master plan as my other choice are Malay game birds.  They are funky looking dinosaurs and if I had a Malay game rooster Josh's rooster/s probably wouldn't survive, and Josh wants to breed chickens more than I do, so while he seems quite happy to add Malay game genes into his breeding program so I can have Malay game hens in the garden, I won't be breeding them.

I couldn't really be bothered arguing too hard with him about it so I've shelved it and decided to save up some money for tracking equipment for Tali so I can actually join Trackwest and get up at omg o'clock to drive to Gnangara for training.  We have agreed to eventually replace the Pekins with Japanese as brood flock when the time comes to replace them.

So this kind of comes under "chickens" but also pertains to the garden.  Josh recently borrowed this book from the library called "Holy Shit" by Gene Logsdon and decided to do a deep litter system in the chicken coop.  It's one of those basic, simple things where you wonder "Why in the hell didn't I think of that in the first place?" 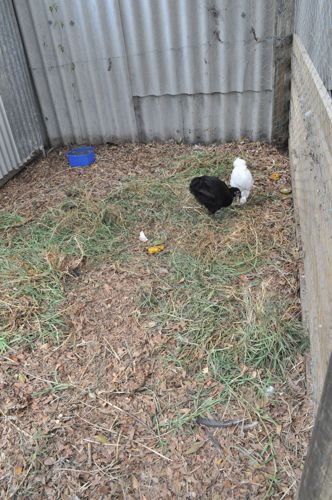 The deep litter system comprises of picking up all the leaf litter and grass offcuts in the garden and throwing them in the chicken coop every time there is leaf litter etc to throw.  In our case, there is always plenty of leaf litter as we have huge arse trees in the garden and they like moulting frequently, and we don't have a shortage of plants.  The chickens scratch through it and turn it over along with their manure and it composts in there and can then be shovelled out onto the garden.

Those two in the picture are "the big Australorp", now just "the Australorp" (and suspected dinner) and Banshee, "the big Naked Neck" (currently back to thinking female) who made one hell of a racket and kept trying to jump out of the box when we were taking them home.

And lastly but not leastly, homeschooling

This evening I read a book to Ru, who asked me how she was supposed to be able to figure out the words.  I said just follow when I'm pointing when reading to her and eventually she will recognise the words.  Both the big kids played a bit of Pocket Phonics on the iPhone.  Tao actually declared it was too easy and went to look for something harder.  And he was telling me he couldn't read.  Ruan also does all right with it, it seems more her level.

Earlier tonight Tao requested Josh teach him science.  They started off with graphs and eventually meandered into magnets before I stopped listening as I was doing other things.  They talked science and maths for half an hour or so, and at one point I heard Tao asking to do some sums.

I was reminded I should probably think about blogging more homeschooly type stuff, or at least writing it in my notebook purchased for the purpose.

Summer rain
I think one of my roosters is possessed
Photos. Lots of them.
Photos from the garden
Christmas time, mistletoe and wine, and slightly different this year
New camera, more aquaponics photos
Life and !schooling in 2012
The sorry chicken saga
Damn those stick fast fleas to hell