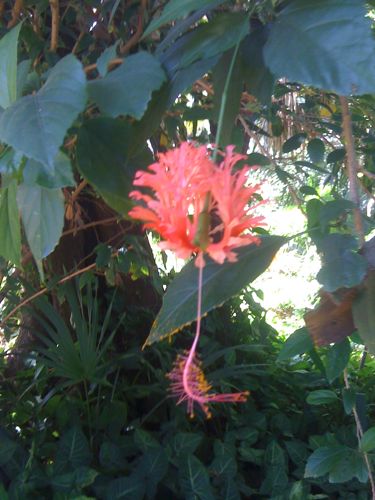 We hit up the Perth Zoo today, and I finally got around to getting the zoo membership passes.  So now we can visit regularly without it costing an arm and a leg! We inadvertantly stayed there the whole day too.  Maybe it was the cart.  I've been avoiding going on the "adult and kids' prices" days because it's always packed out, on the other days it's fine and we can always get a cart.  Then the kids can hitch rides whenever they're feeling a bit tired and we don't end up walking over half the zoo before they're complaining of being tired.

The zoo visit was a zoo visit, the kids loved every minute of it, and the mother in law and I were tired out pulling them around in a cart.  One of the highlights of the trip was seeing a mutant hibiscus (I have no idea what it actually was, that's what it looked like to me) and a numbat which apparently didn't come out much.  The numbat not only came out, it quite happily traipsed around the place completely not minding our presence.

It was the post-zoo games that have been entertaining me though.  The big kids were playing shop, and Ruan apparently sold "salad, salad bars and ice cream".  Tao's response was "Wow, you must have a lot of salad!"

At dinner, Tao pretended to be a numbat licking up "termite paste" (mashed potato). 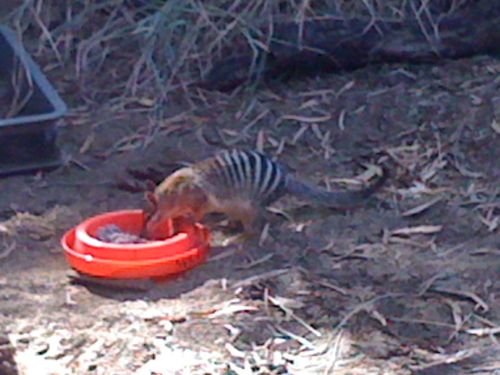 After dinner, he slithered in on a blanket claiming he was a "gigantus slug" and that someone better stop him coz he's huge and gross and slimy.  Josh insinuated there was a giant chicken about to eat it.  I took on the role of giant chicken and picked him up and pecked him to death (kissed him lots).  After having the gall to tell me I was crazy, he then picked up a fan blade off one of his toys, professed himself an oven and started twirling the fan while saying "Cook! Cook! Cook!"

So apparently I got cooked. And as if that wasn't enough he then casually jumped off my lap and informed me, "Okay, now you're covered in barnacles."  Then he traipsed off.

After that I had to put a toy construction helmet on Ru's back so she could pretend to be a snail and she slithered off with associated sound effect of "Slither, slither, slither..."

For no apparent reason it reminded me of a few days ago where Ruan ran in announcing, "No birds will come an' eat our vegebles, coz we're makin' a SCARECWOW!" 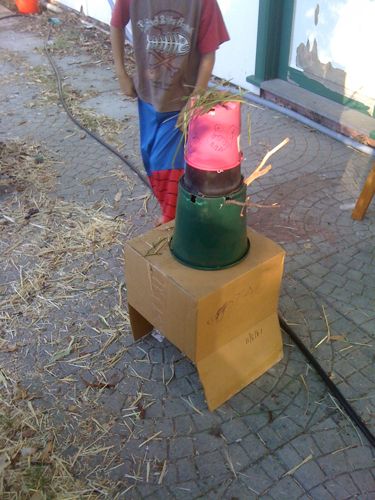 I love my kids.

WriteMyPaper Saturday, 2 December 2017 @ 5:47pm [Permalink]
Visited here whilst on holiday with my husband and kids.We absolutely loved it,especially my son.He get excited when we say we will visit there again.It was great to see many school children enjoying and learning in the zoo.Volunteers are really friendly.Trainers and keepers are doing a good job,they are caring animals well!There are lots of shade and resting area.I love taking photos.I have taken many photos of different varieties of animals there.
hypothesis dis… Wednesday, 1 April 2020 @ 4:44pm [Permalink]
I believe you had lots of fun there. I often had gone to zoo in my childhood, last time it was, I guess, seven years ago. I like so much an aquarium but hate reptile section, those snakes and spiders make my blood cold
writing disser… Monday, 4 May 2020 @ 9:38pm [Permalink]
My kids will be elated if I show those  zoo membership passes to them. It is such a great idea to spend some time outdoors and hear them laugh and learn about animals.
purchasing dis… Friday, 8 May 2020 @ 4:51pm [Permalink]
I can imagine how happy the kids were. Fun learning is the best, especially if the animals are involved in the process.
order a method… Monday, 1 June 2020 @ 4:19pm [Permalink]
I've been to the Perth Zoo once, and I've had only the best impressions!
hiring a hypot… Thursday, 10 December 2020 @ 7:19pm [Permalink]
I love zoos very much. It was very interesting for me to  read your post with so beautiful photos. I wish you good luck, I am hoping to see more cool posts from you in the future. I will definitely share with you photos from our adventures ASAP.  Thanks!