Three decades, and some dolls

I recently hit three decades.  I spent most of the actual day finishing up the coding for the site that's going on the kiosk Sprat and I are doing for the Christmas Island Tourism Association and cleaning for the party on the following day.

Ruan requested the whiteboard so I took it down for her, and little arty girl knocked herself out drawing on it.  Tao came in to me at one point asking how to write an F.  I explained it as like an E but without the bottom line (and previously I've described the E as a backward 3 as that's how he was writing it, just straighter).  Later he very excitedly came out and asked me to come look at something he'd done for me. 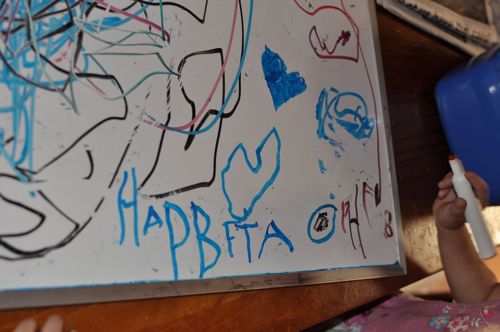 I didn't think it was too bad an effort for sounding out "happy birthday".  That squiggle on top of it is a heart drawn by Ruan, copied from the blue one above it that I drew at her request and she coloured in.

I aww'd over the gorgeous writing attempt and then very quickly wrote out what "happy birthday" actually looks like in smaller writing up the top of the whiteboard somewhere, then aww'd some more over Tao's very good attempt and over Ru's little heart.

The actual party the following day was awesome, very relaxed and happy with all sorts cruising in and out.  I know some very awesome people and I love them very much.  The day culminated in my neighbour two doors down returning with Itti, who visits them daily but often forgets to come back.  He came in for a drink and chat.  He and Josh talked cars and bikes for a bit, and then he went on to tell us stories from his youth (he's 60ish), very interesting as he's one of those people that has been everywhere and done everything.  Somehow we got onto the topic of Malay and he said his wife would probably be happy to teach me Malay and maybe I could help her out with her English.  I really like the idea and have actually been considering looking into something like that.  Never expected it to fall into my lap! So just trying to think of a time to wander over there with the kids to learn Malay.  Or at least learn some grammar and increase my pathetic vocabulary so I can string sentences together and maybe even hold a conversation, I do actually understand bits and pieces.

Now, have some random associative brainwork.  Earlier today, I was on LinkedIN and there was Yet Another Question about whether [this] was a [that] killer (in this case it was wondering if Facebook's new email system was a gmail killer).  I am quite bored with those questions and don't bother answering them.  What the askers don't seem to realise is that there is this thing called diversity.  People have different wants and needs, and no one thing can be everything to everyone.  That is why, rampant consumerism aside, there is so much Stuff.  And that is why wondering if [this] is a [that] killer is kind of redundant, because unless [that] really falls behind or get taken over by a bunch of douchebags (or are revealed to be a bunch of douchebags) or stops offering services relevant to enough people to warrant continuing to operate, [this] and [that] are usually serving people with different wants and needs.

Diversity led me onto doll families.  Ruan's doll treehouse came with two little wooden dolls, a boy and a girl.  When she first got it, Ruan was playing with the dolls on the dollhouse, along came Cub and she loaned him the boy doll to play with.  Tao came in and asked "Isn't there a puppet for me?"

And I realised on a deeper level, no, no there isn't.  They come in pairs (male and female) or in a family setup (mum, dad, brother and sister, though every now and again you get one with a baby, and rarer still you get one with nanna and pop).  When working off mass appeal sure maybe going the most common generic mould works, but it's so...bland.  What if your family isn't the (close minded and rather random) nuclear ideal of mum, dad, and pidgeon pair kids (with optional baby)? What if you only have one parent? Or two of the same gender? Or three? What if you're one of four siblings? Six? What if you live in a longhouse with your grandparents and aunties and uncles and cousins?

Onward the brain went into "there's gotta be a market for custom doll families out there".  So I looked.  And after wading through "how to start your own custom doll business" and "reborn babies" the blatantly obvious answer jumped out.

Make your own.  Out of pegs.

Now to find some pegs.  Looks like Riot has some.  Might bring it up as something to do for the WANLN scout hall crew.

In other news not so related to home education, my new Cintiq arrived today! It's a joint birthday present from my parents and sister and my husband.  My level of happy is not one easily described or measured, even if I did utilise what's left of my once extensive vocabulary to attempt it.  The closest I can come to is I GOT IT! I GOT IT! PSYCHOHAPPYHYPERYAYYY!!! (and I think only a few of my friends will understand that ;)

I'm missing my mini DVI converter though so can't use the display which is a bit of a spew.  Hoping to race down to Carousel (and not barge into traffic or parking problems in the process) to grab one from NextByte after Josh gets home so I can use it tonight.  In the meantime, it functions just fine as a tablet so there is art I can do!

I'll write Yet Another Review about it once the enamor and the new Cintiq smell wears off a bit.

I just need to do the rest of the housework first.  Always something :)

shore excursio… Friday, 2 September 2011 @ 5:51pm [Permalink]
I’m still studying from you, however I’m improving myself. I certainly love reading everything that's written on your blog.Keep the tales coming. I beloved it!