My little boy is down for the night (I think). He was a bit of a crank factor today but I think it was coz his sleeping pattern went out of whack, Josh's mum came up from Geraldton and spent a night with us, then we went up to Pip and Simon's place for lunch. Was good to catch up with Josh's side of the family, even though we didn't really see Simon for more than ten minutes coz he had a bad hangover from the night before and hadn't gotten in til 6:30am. He had a great play at the park, but he missed his nap time so was quite cantankerous at the end of the day, well by his standards anyway. I've seen worse cracks than that.

Had another threatened labour thing yesterday as well, guess no more big long walks for me coz I suspect it was brought about by deciding to walk to the bank coz it was such a nice day, and it's a 15min walk. Halfway there my hips and back started hurting and I started contracting madly. We brought Tao to the park on the way back, partly coz he wanted to go to the park and we said we'd bring him on the way back and partly so I could rest. I crashed out on the couch for a fair portion of the rest of that night, the next day I woke up with the contractions worse. They continued most of the day, then subsided, then got worse so called the midwife and she decided we were going to the hospital to get checked out. She didn't think she needed to come in with us seeing as she didn't think I was in labour, but as the pains got worse decided she would come in with us after all. Got to the hospital and once again it had the effect of scaring off the contractions coz there was nothing and everything was normal. Went home again.

And I was wrong about him being down for the night, just had to go resettle him. Anyway.

Today not so bad with the contractions, they're back to what they usually are, being semi-regular and irritating but completely not doing anything. Hips and back and pelvis are absolutely caning but. Still three weeks to go til term. Expecting Smidge anytime from the 20th of October onwards. I have been joking about how after all this crap I would probably go to 42 weeks but everyone concerned doubts that will happen.

Tiny is learning how to count and read. Slowly but surely. And he's slowly working out when he needs to go before it actually happens, so hopefully the toilet learning will follow soon. Earlier while we were getting him ready for a bed he said "Ooh, fart!" and promptly farted. Sentence fragments are becoming more common as well. Soon the endless baby babble will be replaced by endless chatter and not long after that will be the endless questions. "What's that? Why? Why? Why? Why?" He'll be 2 in December.

I just realised, it's now October. We could well have a Smidge close to the end of this month. I'm looking forward to it.

Oh yeh and before I forget, 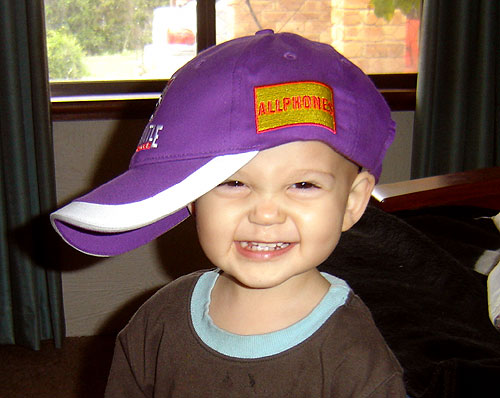 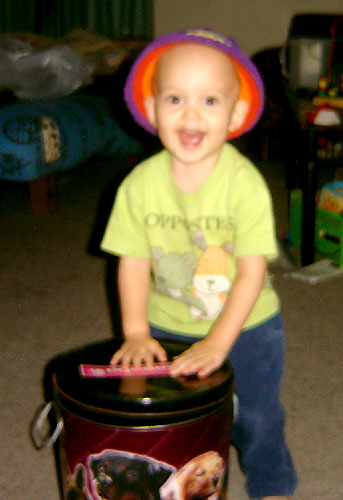 
In other news, I need to talk to Jeremy about getting more space and another domain on my account so I have somewhere to put the homeschool website I'm building for Tiny and TheSmidge. It even has forums. Wow. Still a lot of work to do on it and it looks incredibly boring coz I haven't made any graphics for it, but I'd like to get the bulk of the coding and layout stuff done before I start fiddling with graphics. The baby board is also nearing completion, it's now a case of I have some other minor stuff to do which I can do before or after the switch, I just need to work out with Cam and Jayne when the switch is going to happen and send Cam the database schema or whatever so he can convert it for me and then do the switch. The logistics of coordinating it is a real pain in the system, but I'll do the best I can and hopefully not system shock everyone too much.

And with some luck before Smidge is born.