I'm sure people think the idea is appealing. Lie in bed and have someone else do everything for you and you can just chill out.

It's driving me insane.

Why am I on bedrest? Well. Last week sometime I started having tightenings across the stomach and my uterus felt like it was leaking. One midwife call later and she suggested I stay in bed as much as possible as I was having regular (if short and painless for me) contractions. Least the fluid in question was just a ridiculous amount of cervical mucous and not amniotic fluid. And apparently my cervix looked very slightly eroded, might have been a bit short (can't remember) but otherwise was thick and shut exactly the way it should be.

I anticipated being laid up for a day or so and then easing myself back into things.

No such fricken luck. Every time I get up (to say, go to the toilet or have a shower) the contractions start. Normally I'd ignore them and get on with what I was doing, or if they were stinging, either stop for a break or slow down. These ones don't stop though and the concern is that they might trick the uterus into thinking it's time to drop the baby.

It's only been in there for 26 weeks. It's so not ready to drop out yet.

I woke up every morning feeling sick and generally being incoherent til lunch time, and usually refuse to eat or drink til I'd been awake for a little while. Dehydratin would not have helped. I don't even like breastfeeding much coz my boobs hurt.

Josh changed the mattresses over today so being on the firmer, les stabby one is helping a lot. Today was good coz I actually ate a decent amount of dinner. Due to my sedentary lifestyle I've only been feeling like one meal a day, if that. Apparently I'm looking better, I feel a bit better too, though the problem is I'm getting more low down cramps and stabbing stinging feelings around the cervical area, and the tightenings have increased slightly, as in sometimes I'll get them even lying down, which is a real pain in the system.

Both Josh and I figure that I'll be fine tomorrow, or maybe Tuesday. Coz it can't go on forever.

Although we have been discussing what to do in the unlikely event I get laid up for the rest of the pregnancy. Most of them involve him dropping out of uni which I don't want him to do and he doesn't want to do. He's this semester off graduating. And if he drops out Centrelink are going to be all over us and we seriously don't need that shit. I contemplated going back to Christmas Island where I can get help, being away from Josh for so long would be killer. The good things is he wouldn't have the distractions and can thus concentrate on studying, the flaws in that plan are in the event I do go into pre-term labour we'd be fucked on Christmas Island.

It's taking a toll on Josh too, he's been running the house himself, taking care of me, taking care of Tao and trying to have the energy to study in the meantime. And even though he snipes at me on occasion (like I'm faking it, though I guess it comes when you're exhausted and your partner gets to stay in bed all day) he's doing such a good job and it makes me feel really bad. Hell if it was just me I wouldn't really give a shit, I'm good at ignoring pain (unless I need to pay attention to it), I don't know what to do with this baby though. It can't come out now.

I can't 3d without dual screening so I've relegated to web design. Working on a homeschooling site for Tiny and TheSmidge and also trying to finish up AB, although getting the forum in seems to have been taken off my hands, not that I'm complaining mind. I don't know nearly enough to try to force a phpbb into drupal.

i'm so over this bedrest thing already. I miss playing with my adorable toddler and taking him to the park and stuff. I need to do my chores around the place so Josh isn't so exhausted at the end of the day. All I'm good for right now is reading books to Tao, it's getting hard even playing games with him coz the last time we were playing something twanged and contractions started.

*sigh* hope it buggers off. Tomorrow.

And just so I don't sound like a complete whiner, the pregnancy has been perfect up to this point. I barely noticed it. 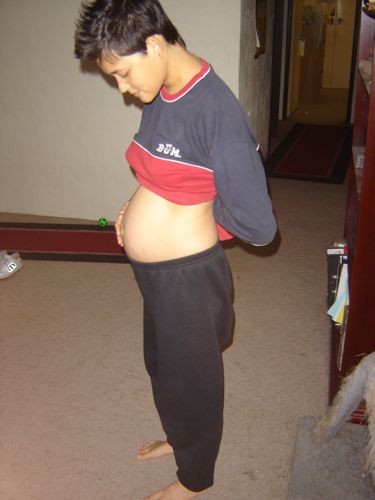 Smidge, popping out after an additional month gestating 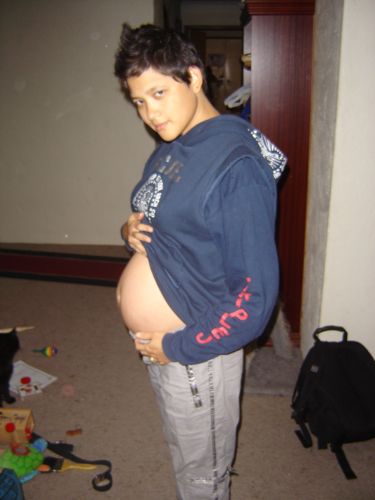 Josh and Tao, the latter wearing the former's bandanna 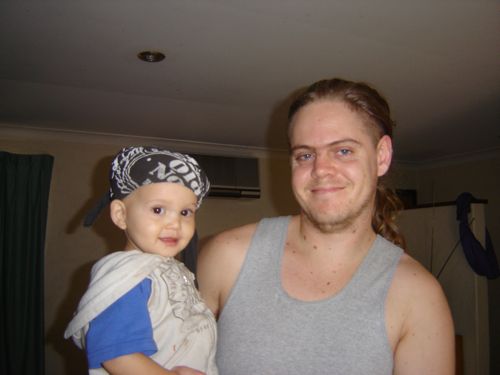 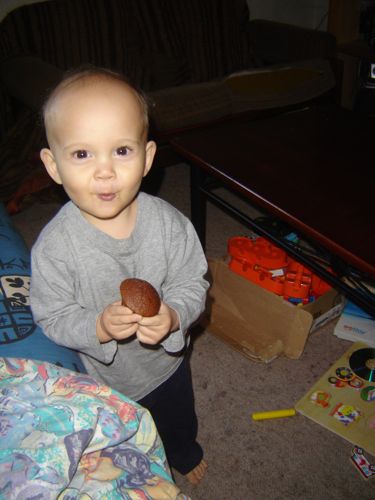 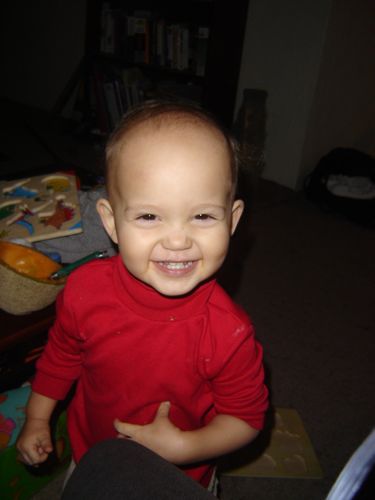