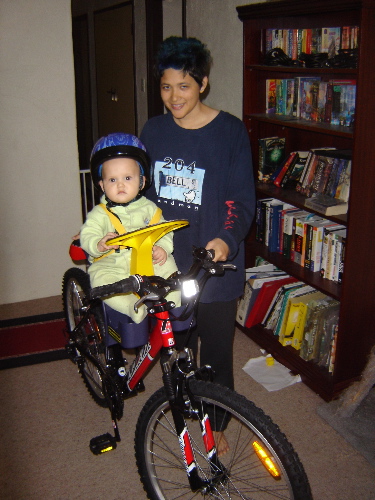 There's us after just having fitted Tao's new bike seat onto me new bike. Handles like a dream, I don't even feel his weight anymore, cept when he decides to lean on one of my arms when he's checking out the road or sleepy, apparently it's more comfortable than the headboard o_O But yeh, we've been doing a bit of that bike riding thing, going to do it more often as petrol prices soar, and hey bike riding is great fun. Haven't done it really since I left Christmas Island, when me and my best friend Darren used to go bike riding pretty much every day. Ahh the good old days etc.

Sometimes I miss them.

Tao has worked out that he can cruise around the walls and window sill seeing as he can't cruise between furniture (we don't have a lot so it's a bit sparse). He likes playing with the dinosaur jigsaw puzzle that his Uncle

jassalol gave him. He likes going on bike rides. I tihnk he's growing some new teeth coz he's not that interested in eating for the moment but is having lots of boobyjuice. He can stand on his own for short periods of time, but the whole balance thing is frustrating him, so he's practising being bipedal by sitting up on his knees. We call him Bulldog coz he moves his arms from the shoulder when crawling, but is slowly realising he has elbows :)

He's doing more and more wees in the bathroom as we slowly get better at interpreting when he needs to go. Josh is trying to get him to say "wee" when he needs to go, I'm just working on intuition and sometimes I'm a bit late, but he's only 10 months old, it'll happen every now and again. But we're ridiculously proud of him ^_^

Still being stopped at the markets and sometimes randomly in the street coz he's just too damn cute.

I think I had some other stuff to write in here while he was napping but I've forgotten. Typical. Will try to keep up to date more often, and maybe even post more pictures. Mm. Yeh. I can barely keep up with what I'm doing much less update my journal (not that I ever have anything worth mentioning) or his journal, or comment and let people know that I am actually reading. But I'll see what I can do.

blobbet, sorry I didn't get those bottles in the mail last week, will try for this week if I don't get mauled by the weather and random miscellaneous occurrences again o_O