kowren and I decided to trek to Freo anyway to see if we could find any place that had canvas or hessian sack or something similar backing. We are gong to cut up this quilt and quilt cover to make matching floor rugs for Tiny and her future child. The four of us (me, Josh,

terrycat) had a fun long debate about homeschooling vs mainstream schooling as well. Their kid isn't even born and ours is only 9 weeks or so. Yeesh :)

We didn't find anything in Freo as it was mostly shut BUT I did finally find the wooden toy stand at the Freo markets. I'm quite keen to get Tao some of those toys in a couple of months whenever he learns to sit up to be able to play with them. They're cool :) We're probably going out again tomorrow sometime after training (if we make it to training, I think Josh said something about an 11am start, training goes from 9:30 (tai chi) through to 12:30 (one of us trains in the class after tai chi and the other in the class after that, who does which class depends on whether it's Tuesday or Thursday).

Oh yeh, we had a minor leakage today too. Serves me right I guess for deciding against using the plasticky cover but the last time we used it and I put my hand in it to check if he was wet it was humid in there, like obvious temperature difference (and Tao needed a nappy change). Think I'll wait on my order from BubbaJ and just risk leaky nappies til it gets here. Anyways. We stopped off at City Farmer's (it was open and we decided against gettng a canvas dog bed bag coz it was expensive) and noted that Tao really needed a nappy change, he had poo leaking out one leg of his nappy and onto the car seat. So Karen changed his nappy and I cleaned up the car seat, then attempted to wash out the nappy under a tap (the flowers under the tap are going to be happy) before wrapping it up in newspaper and stuffing it into the wet section of the nappy bag.

When we got home I asked Josh to please hose out the nappy. He sighed and complained but he did it coz he's a sweetie, and he opened out the nappy and exclaimed "HOLY SHIT" at the amount of poo that was on there. I thought it was amusing :P Our boy can do some prodigious poos o_O

As promised we finally utillised Karen's inkpad to get some Tiny feetprints. Messed up the first couple of times and after two experiments managed to get some nice clear ones :) 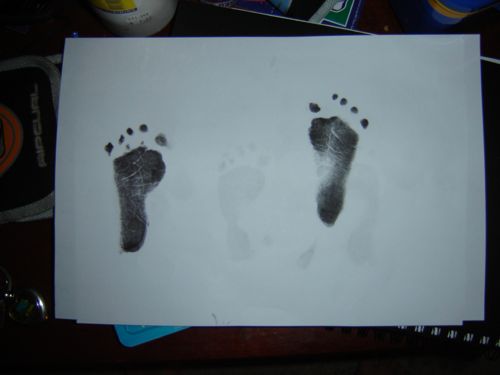 The above is an A4 piece of paper with the botch jobs/experiments on the back. His feet are only slightly bigger than they were when he was born o_O

Also reminds me, on the offchance the parentage get around to reading this and are interested, spoz I should post his latest set of numbers, taken when he was 6wks 5/7 (which I'm guessing is nearly 7 weeks, I don't do spastic notation like that :)

Apparently he does everything a little baby his age is supposed to be doing. Think the health nurse was a bit surprised when we told her that he could stand as long as someone was balancing him and that he liked jumping. He rolls as well though he has yet to actually do it deliberately, most of the time they're accidental, he flips one way or the other and ends up with this stunned mullet look. He also has long conversations with us, unfortunately he also likes having said long conversations at 6am.

He likes chipping in to conversations as well when we're talking, and we try to include him in them as much as possible though occasionally I'm guilty of forgetting that he's entitled to an opinion as well, or just not listening out for him if we're in a noisy location. Usually this isn't a problem as he's almost always in a sling but on days where it feels too hot to be lugging him around I prefer him in the pram. Think he prefers it too considering he can get a nice breeze then when there's a nice breeze blowing.

I think I actually had more to write in but I'm tired and I can't remember what it was therefore it probably wasn't important ;)

Bedtime for Beks and Taos and also for Joshes when they finish whatever it is they're studying for.