[imported from the livejournal and backdated]

Bleeding again. Not fun. Hope it goes away soon and is not my period coming back >_<


Last night was call the parents night - although Josh kinda forgot coz he was watching a movie. He usually calls first and then I'll call coz Christmas Island is one hour behind Perth time.

Uncle Mike actually answered the phone coz he was the only one to hear it, they were doing some kinda kareoke night at my parents' place o_O I had a brief chat about motherhood with him (he asked, specifically, how am I finding motherhood), he would remember best I guess, he has two little boys aged 5 and 7. Or something like that. Maybe a bit older, I don't remember.

I had a really nice long conversation with my mother about a whole lot of things, and eventually (inevitably perhaps) the conversation turned towards baptism.

We'd had the question before from absolutely everyone. "When is he going to get baptised?"

The original response to that question was "He's not." This was met by barely contained outrage on both sides of the family (it was probably barely contained by my look, I seem to be really good at the "You'll be wasting your breath" look). I don't believe in "forcing" a child into a religion which is what baptism in the Christian sense comes across as being. You get some cold water poured over your head, priest says you're a few words and WHAM you're a Christian (enter whatever denomination in front of it) and you're expected to act like one and believe whatever they believe. Everyone else is wrong. I didn't like that and figured that if Tiny had any religious inclinations he could pick the one he got along with best. After all I was "born" Christian and all the stuff I do seems to be a lot closer to some forms of paganism.

Anyway my mum gave me a book all about Christian baptism which I flicked through but never actually read and told me to think about it.

I've recently read The Da Vinci Code by ... erm ... Dan Brown I think. There's a bit in there where he's decribing how Christianity was deliberately masculinised by a bunch of stupid [censored coz parentage might be reading ;)] way back when (which is why although I think there is a fair bit of artistic license taken to make the fiction interesting, I think the Bible is a bunch of great stories documenting how a certain religion came about and am rather amused by the zealots that take it at face value). In the book it's reckoned that God (by the name given in the Bible, I can't remember what name it was) lived under the temple in Jerusalem (I think, yeesh I suck at this) with "his" female counterpart who had a long name. But when they re/wrote the Bible they kinda conveniently forgot to add this female counterpart in, otherwise it would defeat the purpose of trying to create a monotheistic patriarchal religion, or maybe the Christian god really is that patriarchal (though I'm more inclined to believe the former considering the glaring discrepancies between Old and New Testament...they shouldn't have let me do Bible study type stuff if they wanted me to unquestioningly swallow everything they tried to put across as some kind of supreme truth). Alternately they may have stumbled onto the concept of a living universe, conveniently labelled it "God" and decided it was male because they're stupid. How true or otherwise this is I have no way of finding out and no real desire to. I believe in a whole lot of gods and goddesses. I think "God" is a convenient term to describe that something in Absolutely Everything (though humans have a nasty habit of trying to make themselves special by saying that they have this something and other races/religions/creeds/animals don't).

I have no real issue with the religion, just with the church. It's stuffy and doesn't practise what it preaches and I think it's just there as a control mechanism. All religions have almost everything in common, just the deities have different names and the rituals vary, but the underlying message is almost always the same.

The people at kung fu or who know about related philosophies smile and say "cool" or something along those lines when we tell them what we named our baby. Everyone else, once they finally manage to get over that it's not "Dale" (I was pronouncing it Tay-o so I can see how they could make the mistake, then switched to Taa-oh but people are still managing to make the mistake o_O Probably because I use a sound that's partway between "t" and "d") they want to know what it means. The answer me and Josh usually give these people is "Everything" or "Balance" or "The Way" and let them figure it out if they feel the inclination to. We are trying to work everything to something like a yinyang and lead a happy balance in life in general, say in having enough of the modern life (electricity, cars, computers, running water etc) to be comfortable but taking care of the environment as much as possible (cloth nappies, we're trying really hard to set up a waterwise permaculture garden, recycling, not littering, trying hard not to beat up anyone who does etc), art in my case of having the hard and soft of kung fu and tai chi and the soft of digital art (I suck at traditional. We want our son to be happily balanced as well, walking the line of take as much as you need and give that much back, enjoy life, respect nature etc.

And I thought well, maybe getting him baptised isn't such a bad idea. But none of this in a church bullshit. I remember when me and Josh were getting married, I desperately wanted a nice outdoor ceremony, to the point where we were going to have a civil ceremony so we could do exactly what we wanted (which included inviting the elements). Of course the parents wanted a church ceremony and Josh had preference for a priest but didn't really mind all that much. Apparently priests weren't allowed to perform outdoor weddings. I wrote to this priest at the cathedral asking why. He gave me back something about how unions overseen by God should be done in God's house. I wrote back wouldn't it make more sense to celebrate God in something that God made (ie nature) rather than undermining it and insisting that it be done in a man-made structure? I got a fairly nonsensical response. Least Mum agrees with me on that front. They got their church wedding (I didn't really care, I got married to the one I love, the ceremony was beautiful, the reception was great, we're happy, that's all that matters ;). But along those lines, seeing as we want Tao to grow up respecting nature and finding a balance between modern conveniences and not completely raping the planet (which those brain dead morons over at People Before Planet seems to think they have a God-given right to do due to some stupid line in Genesis), it kinda made sense that he should symbolically become more a part of Everything (the baptism thing takes care of the symbolism, humans love symbolism).

My parents were quite happy to hear about my change of heart, although I made it quite clear that it was going to be done out of doors, no ifs, buts or maybes, and if we couldn't find a priest who would do it out of doors then it wasn't going to get done (by a Catholic priest anyway, we're quite happy to do it ourselves but for some reason the certificate of baptism is important to the parentage). Apparently that can be arranged on Christmas Island so we be better off doing the baptism there than trying to convince a priest here to do it outdoors. Only downfall is our friends here would miss out then. But I guess it will be nice for my parents having both his first birthday and his baptism there seeing as they don't get to see him much. It was actually a lot easier talking to them about my belief system than I thought it would be, and I shouldn't have been so surprised to find that although there are obvious differences and differences of opinion as there was bound to be, our respective belief systems are actually closer than I thought. Just goes to show that some things aren't nearly as bad as you think they are.

So apparently they're going to talk to Father Chien (the priest that conducted our wedding ceremony) about the baptism, coz he might be there around Christmas time. I was thinking the 20th of March when we were going to do it ourselves, if we're going to do it on Christmas Island then probably the 20-25th of December or on his actual birthday. See closer to the time I guess.

kowren are supposedly coming around sometime soon (accidentally woke them up, forgot it was a public holiday and Tiny doesn't understand the concept of sleeping in, although we did successfully sleep in til 9 yesterday ;), I rang at 10:20 and they said they'd be a couple of hours. We might go into Freo but I just remembered that I have a single quilt and quilt cover which is completely useless to us as we don't have a single bed, we could probably slice those in half and Karen could make two floor rugs, one for Tiny and one for her future child. It's entirely possible we may end up going to Freo or maybe just to Bunnings or City Farmers to find some hessian or canvas for the bottom of said floor rugs. See what happens whenever they decide to get here :)

Speaking of Tiny, he's been primarily sleeping and eating since this morning. He played the jumping game for a little while with Josh and had a really long conversation with us (SO damn cute when he coos and makes other associated cute baby noises :) and went to sleep after a nappy chance and being fed. And he's just been doing that all day. He woke up once coz I think he had a bad dream, got his nappy changed, went back to sleep. He woke up again not long ago and had a feed, supposed to check if he needed a nappy change afterwards but he went back to sleep again. Either he's finding it good sleep weather coz it's a bit humid or he's going through a hell of a growth spurt. He's also started recently pulling the blanket up to his face and snuggling against it which is very cute. I am going to fet his footprints today. Had a nice period of time where Karen kept forgetting to bring the inkpad and when she finally brought it over I kept forgetting to use it. Not this time. Hopefully. 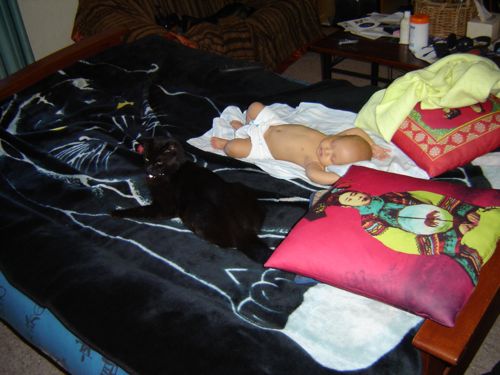 Josh was going to read on the futon but couldn't find any decent amount of space to sprawl in around these two :P