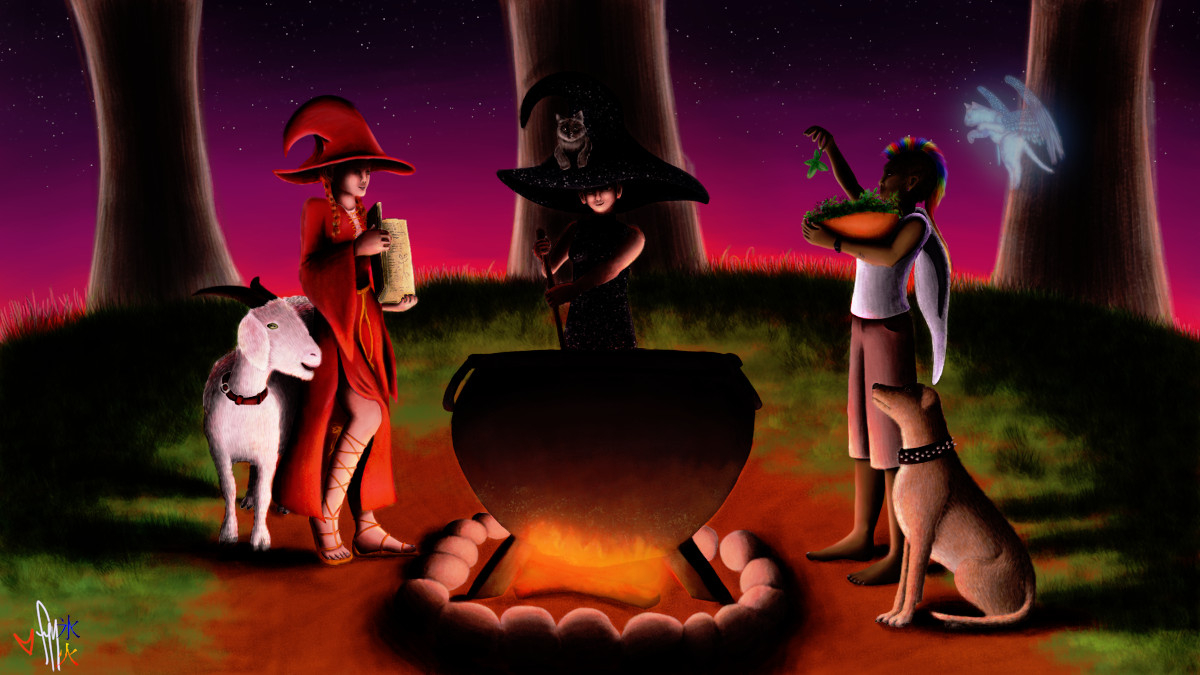 But it's done now and all is well :D

Oh you want to see the layer insanity? It's been a while since I've done a major piece never mind processes so here it is for anyone interested. 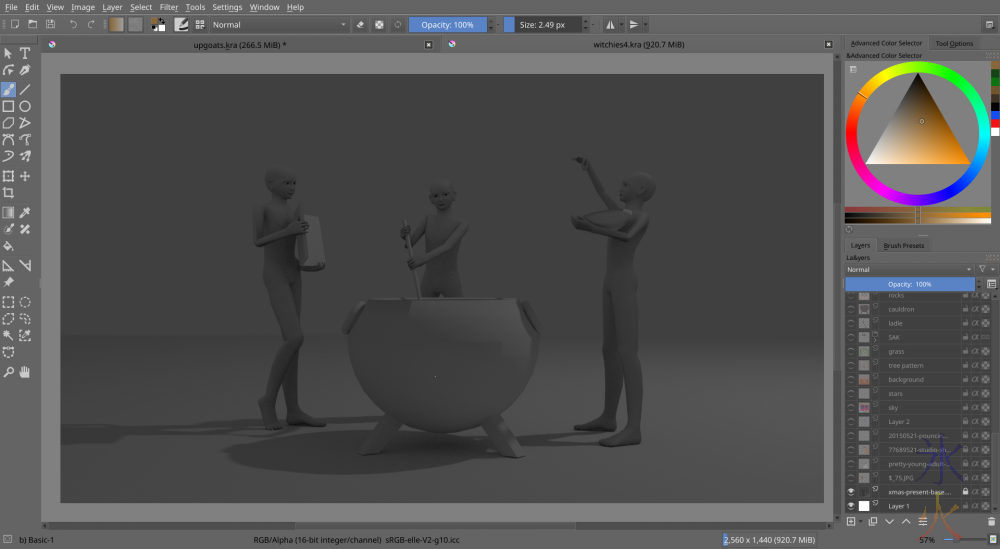 And if I don't have bases for it and can't throw something together quickly (which is currently all animals) I need to image search and hope I can photobash a reference together.  In this case I found three perfect ones and one that was easily modified.  I probably should have kept a resource file but alas I did not because I don't always think.  Then I sketch over the top with a blue pencil if doing a full on thing or g-pen, rough ink or pencil if it's a sketchy. 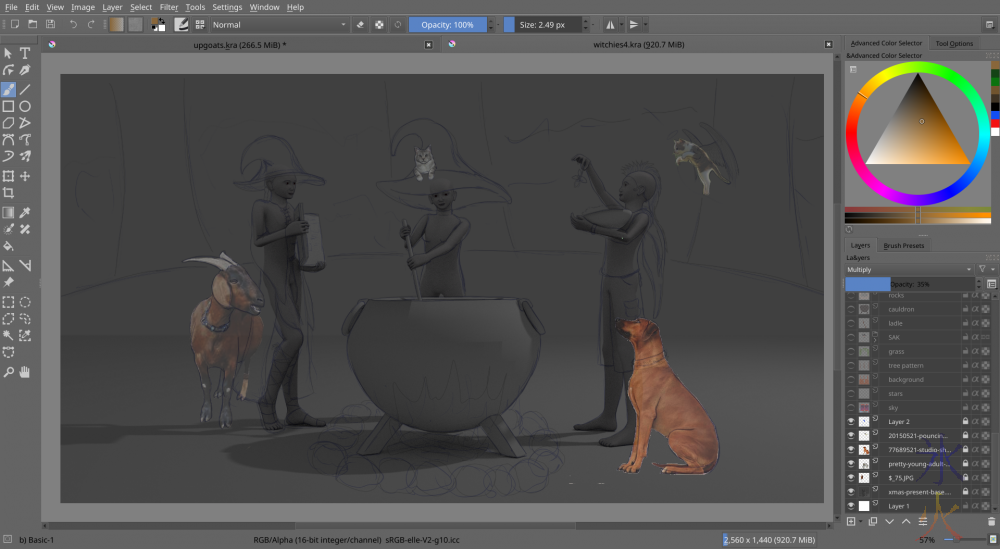 Then I do nice lines with the precision ink brush and turn the references off (sometimes the main base gets turned back on if I feel particularly blinded by the white). 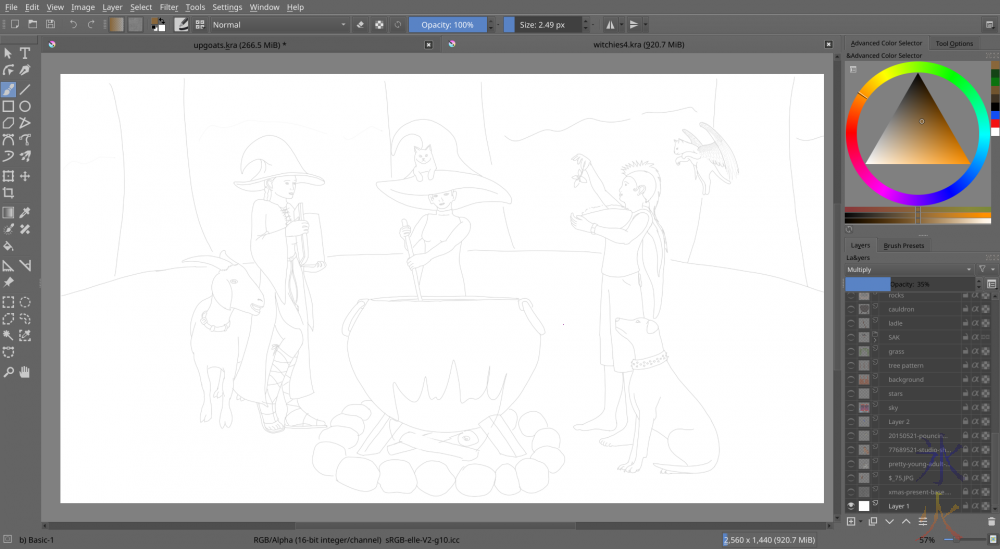 Blending mode changed to multiply and it's at the top of the stack so it should mostly show up over everything else, and also locked so it's not accidentally drawn on.  Opacity reduced so I can make sure my edges are clean.  Then we drop flats.  There is a fast way to do it where you can get the computer to fill in areas between lines and then you go back through and select the areas of colour and fill it with the correct one which is a much faster way to drop flats, but I like doing it manually because I find it therapeutic.  Texture flats are usually on their own layer on top of their respective flat just in case I break something (which happens frequently).  And most of the parts (skin, hair, fur, clothes, grass, sand, trees, rocks, cauldron, fire, sticks just off the top of my head) are on their own layers which are grouped by character because that's how I roll. 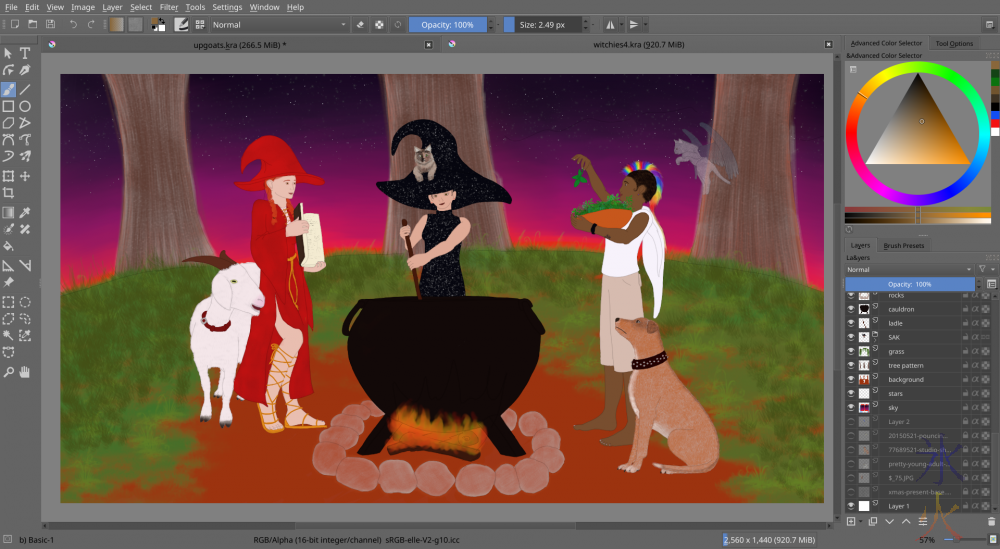 Then the fun of shading! I think I got confused at some point during this process about what lights were coming from where but I did manage to kind of salvage it.  I usually like working with three main light and shadow layers for the sky/environment and additional layers for other light sources as necessary.  Here are the three main ones (which should have been coming from the sun/sky/environment but I think I got confused and included the fire sometimes, it was strong enough that I definitely wanted it to have its own set of three light/shadow layers). 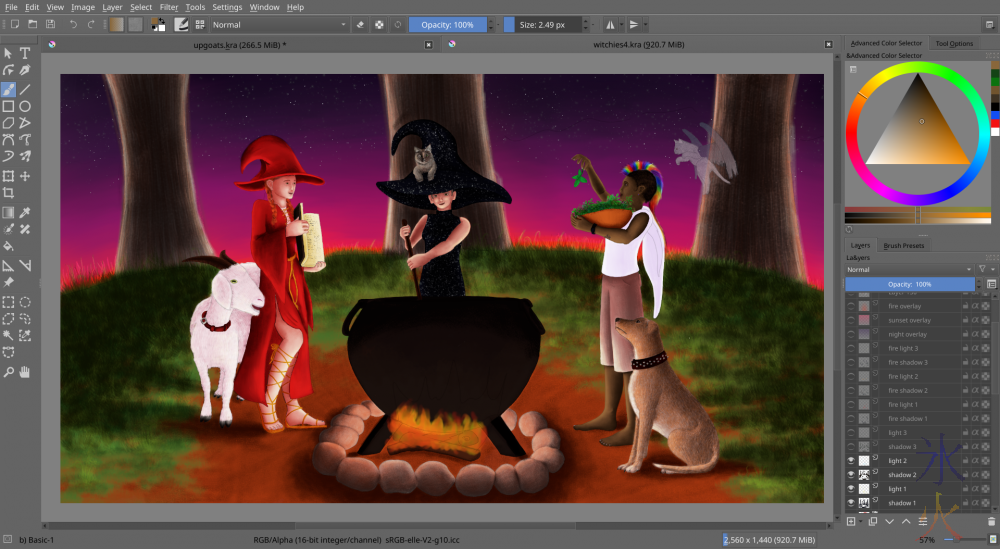 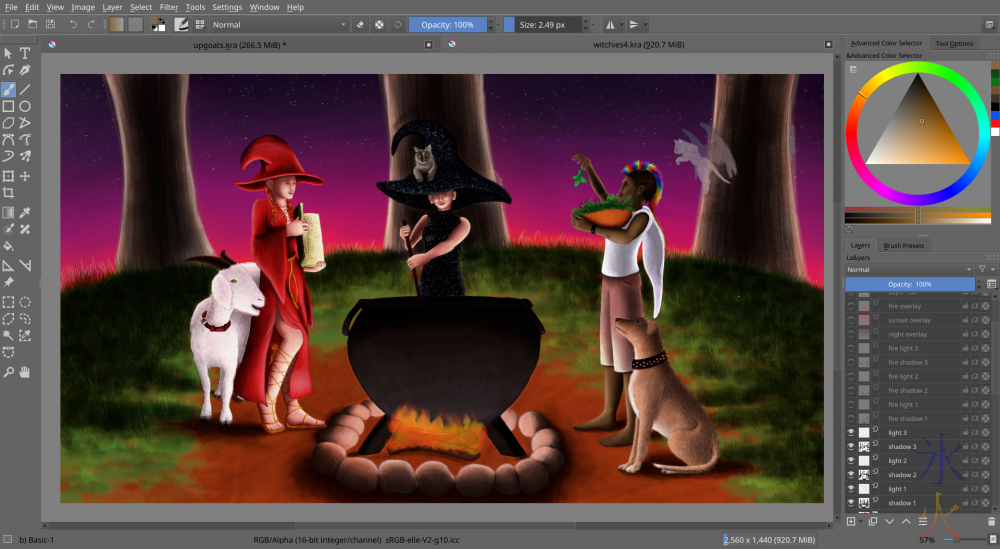 As mentioned above, the fire light was major enough that it got its own set of three light/shadow layers, and it was about then I realised that I had broken things a little bit. 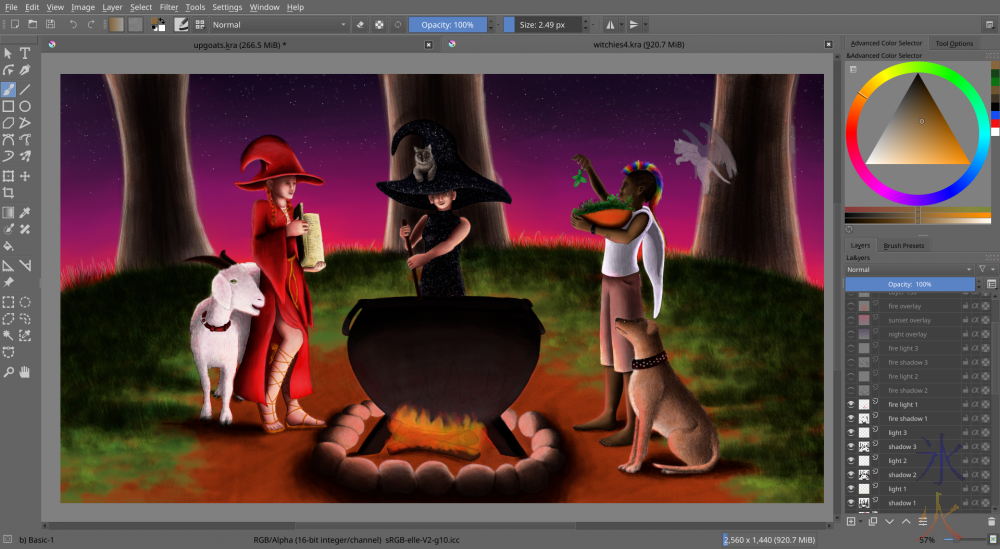 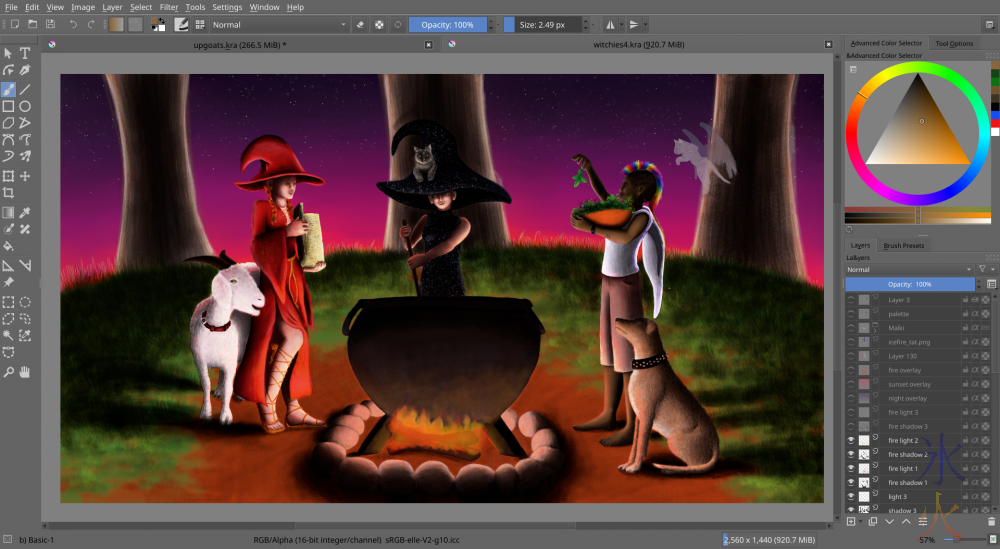 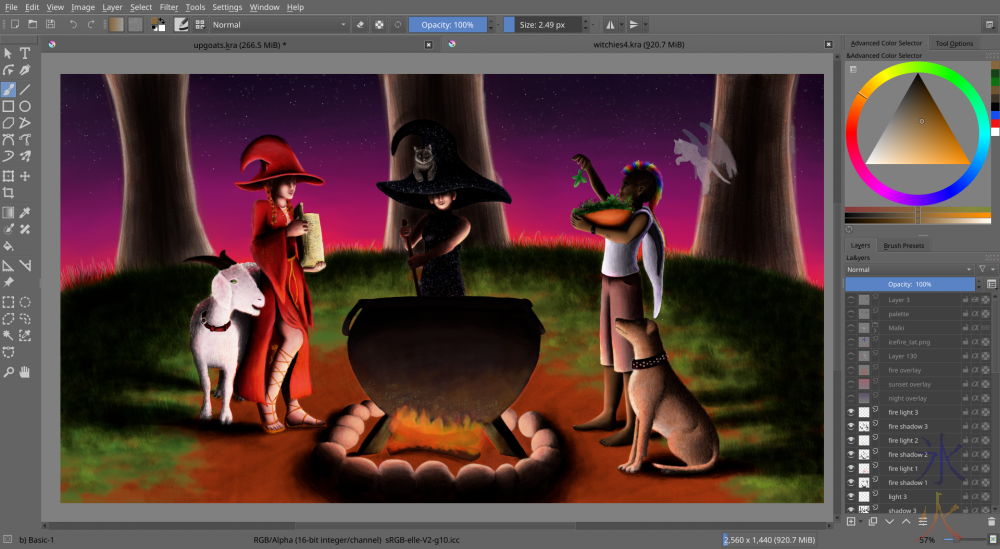 On the way through shading I was wondering how many blacks it was going to take to make black.  Quite a few apparently XD

Then the fire wasn't firey enough so it got three duplicate layers with blending mode "addition", the top one at a much lighter opacity than the previous two. My little spirit cat (RIP) has her own special glowy lighting that isn't affected by anything else or affecting anything else. 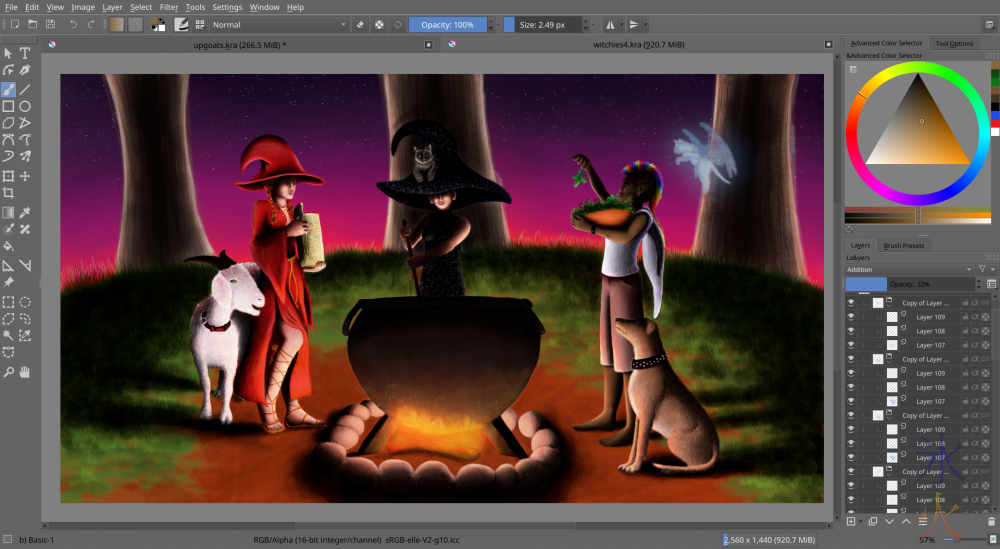 This was done by painting her in blue-greys, then duplicating and gaussian blurring at different settings about a hundred million times (okay three, the layers you can see in the outline are the gaussian blur layers, the actual cat is under the last layer group just out of sight) with blending mode on addition.  And of course reducing the opacity of the lot (including the flats which I forgot was in my group).

I just realised I took all these screenies without my palette layer.  I'm not redoing them XD Exactly as it sounds I have a palette layer that has all my light and shadow colours labelled on it and it's usually on when I'm colouring.

Hope you didn't regret scrolling down this far ;D