Wish you would step back from that ledge my friend... 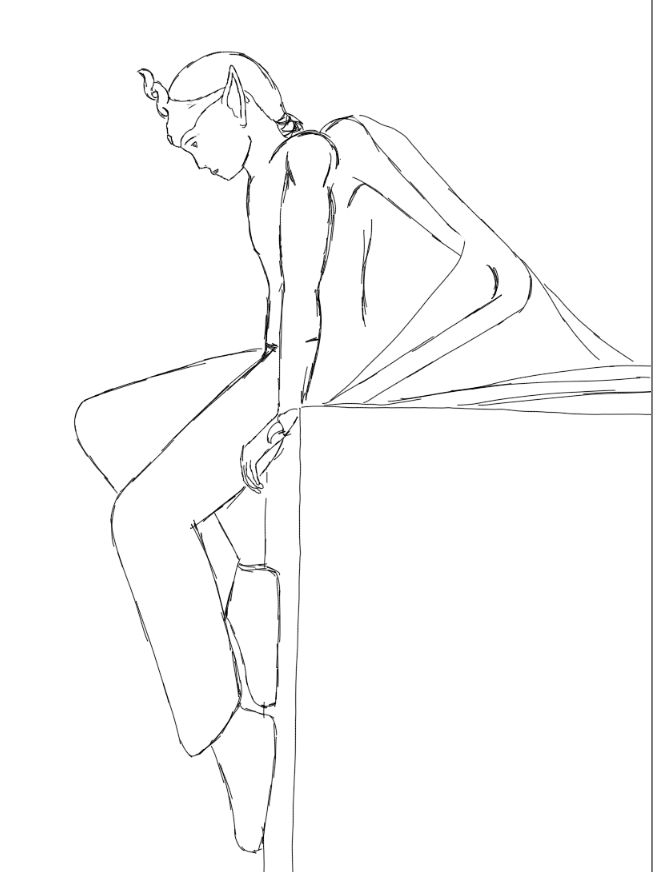 It was a long way down.

He didn't have to use his wings.

Za'haran shifted closer to the edge, automatically curling his feet against the wall n preparation for a takeoff.

Through the numbness, pain.  Gnawing, grating, demanding.  He bit his lip, tried to ignore it.  It wouldn't be ignored.  He fought down the reflex to raise his wings in preparation for flight, kept them firmly pinned to the ground so they could aid the push off.  If he had been taking off, it would have seriously messed it up, possibly even dangerously so.  What did it matter? He didn't want to live anyway.  What was the point?

Still the pain.  He needed a hit.  Badly.  Had done for a couple of days.  He wouldn't give in.  This time he wouldn't.  He would end it.  End the addiction that had ruined his life, end the pain, end everything.

It was a long way down.

Za'haran caught his breath in the alleyway, wincing as pain racked the entirety of his left side.  Again.  He'd chickened out again.  With the excuse of how his life technically belonged to someone else, of all things.  He leaned against the cool stone wall, fighting the sudden, agonising swell of emotion that together with the severe bruising coming up on his torso threatened to crush him.  Maybe he needed to tear his wings next time so he couldn't use them.  He heaved himself upright, felt momentarily nauseous.

Maybe he didn't deserve the peace of death.  Maybe this existential hell was all he deserved.

Carefully, Za'haran spread his wings, moved them gently.  Pain flared in his left wing shoulder.  Whatever.  He would go home.  The bruises would be noticed.  Questioned.  There would be consequences.  What kind, he didn't know.  But at least he was cared about.  Which was better than nothing.

Suppressing a groan, Za'haran took off, his left shoulder protesting with every flap as he worked his way towards a thermal he could use.

He really, really needed that hit.

So until I did the Dragonkin model I didn't realise their wings could legitimately fold down that far.  The Dragonkin do have much more flexible wings than the Avians, and they can hover in place due to the flexibility afforded by the shape of their wings, unlike the Avians who need to find a strong enough wind to fly into to maintain position.  The Dragonkin don't fly quite as well as the Avians however and generally struggle to cover the same distance.  Anyway I'm glad I do 3d!

Was going for the quick sketch here but after playing around with it, I think I might turn it into a wallpaper, though I haven't yet decided if I'm going to just colour it or whether I'll keep this as a plan for a 3d render.  One will take much, much longer than the other XD

And yes Za'haran has been very depressed for a very long time, poor sod.