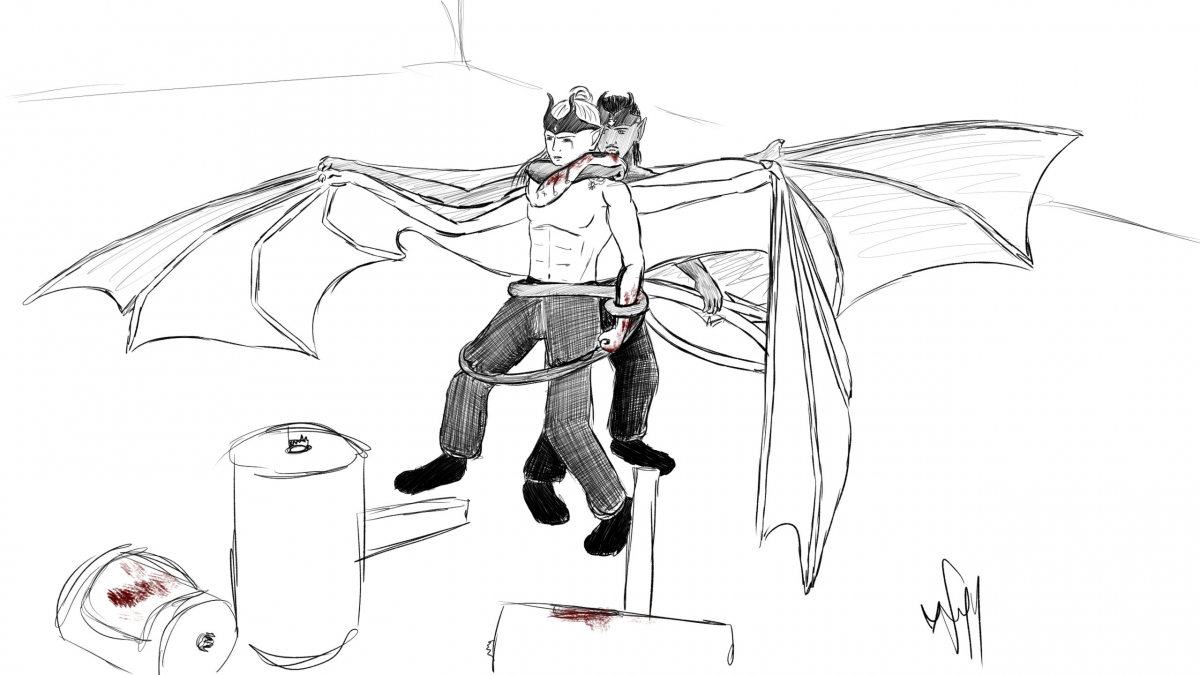 Shu'karr glanced at the time on his comm, wondering how long his triad leader had been here already.  Tsa'run always made it a point to be at least fifteen minutes early to meets.  Shu'karr had rocked up half an hour earlier than their appointed time, and from the sounds of things Tsa'run was well settled in.  Shu'karr quietly shut his bag into a locker and walked to the doorway to the training room.

He only just saw the familiar form of Tsa'run in the mirrors that lined the training hall, in his favourite corner that was difficult to spot from the doorway unless one knew where to look.  He had that intense look about him that made him so intimidating to watch and even more to face off against, and while it seemed like he was concentrating on beating the stuffing out of the wooden dummy he had chosen, Shu'karr had no doubt that his presence had been noted.

Shu'karr moved quietly along the wall, observing with admiration.  Tsa'run would have been good with just the normal Royal Guard training.  Havng to live up to the standards of his family though, he was exceptional.  His movements were so fluid, so deceptively quick, it was hard to believe how much power was in them just from looking.

Tsa'run was hitting the dummy pretty hard.  Shu'karr frowned slightly, moved in a little closer.  The dummy was wavering moreso than usual under each thunderous blow.  Shukarr quicked his pace, paying more attention to the entire scene.

That sound wasn't right.  The dummy's usually smooth spins were skewed now, causing it to wobble crazily each rotation with an irritating screech.  The pads and the arms were smattered with blood, the origin of which was Tsa'run's hands and forearms.

"I think you're a bit much for it.  Sounds like it's gonna break."

"I know you're upset.  It's...it's a really hard situation."  He paused.  That was the understatement of the century.  Tsa'run evidently thought so too as his next methodical blow spun the dummy three times before he violently stopped it with a forearm bar and counter, sending it spinning in the other direction, wobbling even more than it had been.

That was wrong.  Tsa'run was brutally efficient.  He deflected and redirected.  He wouldn't waste energy on a straight strength contest like that unless he absolutely had to.

More skin, or perhaps one of the existing injuries, broke on the next vicious contact.  Blood welled, some adding to the network of splatter patterns decorating the dummy, the rest joining the network of rivulets lacing Tsa'run's forearms, overlaying deep bruising.

"Rune, please, you gotta stop this."

Another brutal stop for another reversal.  The odd sounding clank was more pronounced this time, and the dummy swayed dangerously.

"I know you're hurting, but this ain't gonna help."

Tsa'run's eyes suddenly shifted, his grey eyes darkening into the deep blue-black that Shu'karr likened to a void and found just as unsettling to look at.  Before he could look away, Tsa'run deliberately blinked, his eyes fading back to their normal colour as he did so, and for the first time since Shu'karr had entered, his expression changed from carefully blank to an angry scowl.

As terrifying as the Inquisitor demeanour was, it would have come in to take control of what was obviously a fragile emotional state.  The fact that Tsa'run had consciously dismissed it was more terrifying.

As if spurred by the sound of Shu'karr's voice, Tsa'run became a whirling dervish of limbs, the hapless dummy swinging and swaying under the vicious assault.  Blood drops were hitting the floor now.

"Rune, no! Stop! Please, just stop!" Shu'karr desperately watched for an opening.  Tsa'run was too damn quick.  Watching for an opening was like trying to dodge raindrops in a torrential downpour through thick mud.  "Rune!" Shu'karr tensed to dart in, but immediately stabilised when a palpable surge of furious energy emanated from Tsa'run.

The sound of wood cracking echoed across the empty training room as the head was smashed off the dummy, clattering so noisily on the floor Shu'karr briefly wondered if it would break through the soundproofing all the training rooms had.  That racket was immediately dwarfed by the one that the torso made when that hit the deck.

A deafening silence crashed into the area.

Shu'karr looked at Tsa'run, who regarded the destruction he had caused with muted disdain before turning away from Shu'karr towards the neighbouring dummy.

The thought of how dangerous this situation was did occur to Shu'karr.  He could well end up like the dummy if Tsa'run failed to recognise him in his current headspace.  More pressing was the need to stop his best friend from doing further damage to himself.  So he lunged.  Tsa'run whipped around to face him, fended him off.  His movement was stilted now, slower.  Shu'karr's concern spiked.  Tsa'run had hurt himself pretty bad.  They didn't dance for long before Shu'karr darted into Tsa'run's blind spot.

That was wrong.  The flicker of annoyance he caught in Tsa'run's eyes as he did confirmed that it was wrong.  He had never, ever been able to get into Tsa'run's blind spot, and not from lack from trying.  The only times he did was when Tsa'run let him during practice.  Not wasting too much thought power on it, Shu'karr grabbed Tsa'run's tail just below the bladed half-kite, looped and grabbed higher up.  He heard Tsa'run exhale sharply as he applied gentle pressure to let Tsa'run know he was pinned, and then Tsa'run pushed back, setting and striking back with a wing elbow.

His legs were obviously sore, he unbalanced slightly, the wing elbow strike losing a lot of power, and allowing Shu'karr to brace against Tsa'run's back, grabbing him around the neck with his other arm and across the waist with his tail.  He was only just able to loop Tsa'run's left arm as the latter went to break the choke hold.  He smothered a wing beat with his own wings, and leaned down slightly to pull his taller triad leader off balance.

"Please, Rune, you need to stop."  Shu'karr kept his voice gentle but firm.  He held fast as Tsa'run thrashed angrily, dropped his weight slightly to pull him more off balance which had the desired effect of reducing the struggles as Tsa'run instead fought to maintain balance.  As the struggling subsided, Shu'karr slid his tail down Tsa'run's right leg, hooking around the ankle and pulling backwards.  Tsa'run staggered, fighting harder to maintain position, but Shu'karr definitely had the upper hand now and gently pushed him to his knees.

There was another energy explosion, smaller than the first one but still enough to make Shu'karr blink and tense slightly as it cascaded over him.  Tsa'run's struggles abruptly halted as he suddenly started hyperventilating.

Shu'karr released Tsa'run out of the submission pin but kept support.  Tsa'run didn't make any attempt to escape, his tail relaxing down onto the floor.  His body shuddered as he continued hyperventilating, and then suddenly he went limp.

"Rune!" Shu'karr braced again as Tsa'run flopped, lowered him gently onto his side.  His breathing was at least normal now, though his face was now actually blank as opposed to the masked blankness the Royal Guard adopted when on duty.  Shu'karr glanced over him.  Tsa'run's hands and arms were a bloody mess.  Who knew what the bones would look like.  Fractures would be completely unsurprising.  Shu'karr rose just enough to cross over Tsa'run's prone body and gently rolled up the pants on the upper leg.  The material was both wet and slightly stiff.  Shu'karr was unsurprised to find the exposed skin as bloodied and battered as Tsa'run's arms.

Usually, there was argument.  Tsa'run abruptly insisting he was fine, or that he would get his father to look at it afterwards.  This time, nothing.  No change from the blank expression.  Shu'karr called for medical assistance.

It's been a week.  Last night got to a point where I made the executive decision to draw even if it meant I didn't make training this morning.  So I banged this out (didn't feel like colouring at the time) and started writing, finally got to a point where sleep would be a thing that was going to happen, crawled to bed, woke up late (surprise surprise) and finished writing.

I'll try to knock out a late progblog tomorrow and then resume normal operations on Friday.