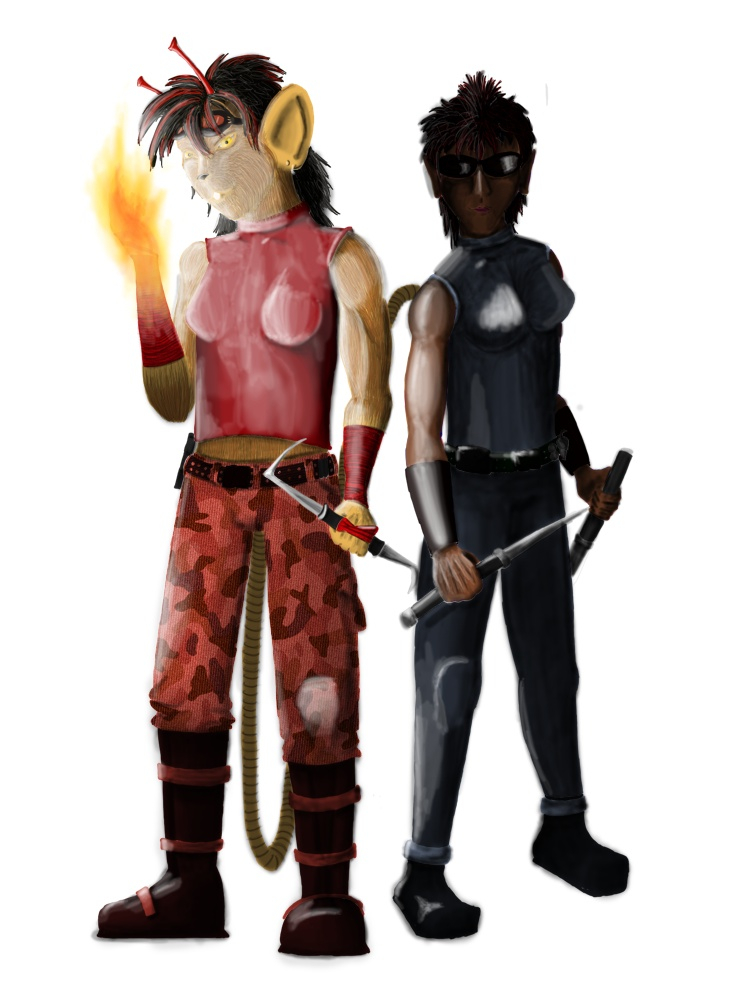 Starzone is the mouse.  Zara is the human.  Zara uses "Starzone" as a callsign.

The original Starzone was a Biker Mice from Mars fan character done in the usual style of fan characters, she was way overpowered and Mary Sue and may have had stupid random flaws attached to not make her seem as overpowered and Mary Sue as she was.  I redeveloped her a bit later and she turned out all right, though I never got around to publishing the fanfic with her and her coterie.  I only roleplay her these days.

She and Streak, another one time fan character, were somewhat responsible for the birth of AR.  I wrote a scene on the now destroyed v1 of Red Planet; describing the antagonistic relationship between Streak and Starzone as they tried to work out the route to get a stolen ship full of liberated slaves that they'd orchestrated the prison break of (motivation wasn't entirely altruistic, they were among the slaves) from Plutark to Mars.  "Red Ogress", one of the co-founders of Red Planet, seemed to enjoy the scene and mentioned that she hoped that they were original characters as they were apparently too cool to be fan characters.

A straight transplant wasn't going to work, as Zara lacks Starzone's pyrokinetic/low level telekinetic abilities.  I started off taking what I could.  Both have dark gold eyes.  Starzone has this mad hair anime spikey hair that she foiled red down the middle.  Zara has a mohawk which has red tips naturally.  Zara's skin colour is a similar coppery colour to Starzone's fur (or at least it's supposed to be).  They both use primarily bladed weapons.  I made up Starzone's before I had any working knowledge of martial arts, and don't have a frigging clue how to use her weapons.  When writing a fight scene I could be lazy and have her flashing and twirling blades of doom around the place and having entire armies collapse willy nilly before her leet martial arts prowess without thinking too hard about practicality.  All I know is that the small pointy blades flick out and lock in that position from the main blades, and the main blades can pop out from the handles.  Zara has a bladestaff which I do have a clue how to use.  I was thrilled to find the linked website as prior to falling over it I had no idea what in the hell to call it.  Obviously, both are pretty good with their weapons :)

To make up for the superpower strip, Zara ended up being part Avian.  She got the crest (which is what her mohawk is), hollow bones and a variant muscle structure.  She likes running and can do short distance bursts of speed in the style of a cheetah, and can cover a decent distance with a jump, especially following a blitz.  Her eyes are photophobic (hence why she's wearing her goggles in the picture), she's fine in sunlight as long as she's wearing them, and is fine in low level ambient light without.  She's much less hotheaded than Starzone and can think logically, calmly and rationally about most things most of the time.

Yes, I am aware that I can't draw and that there's a billion things wrong all over the place.  Also, drawing characters standing in space not doing much or just posing is against my grain, I'm making myself do it that way as I want to do everyone else and I take way too long to do anything.