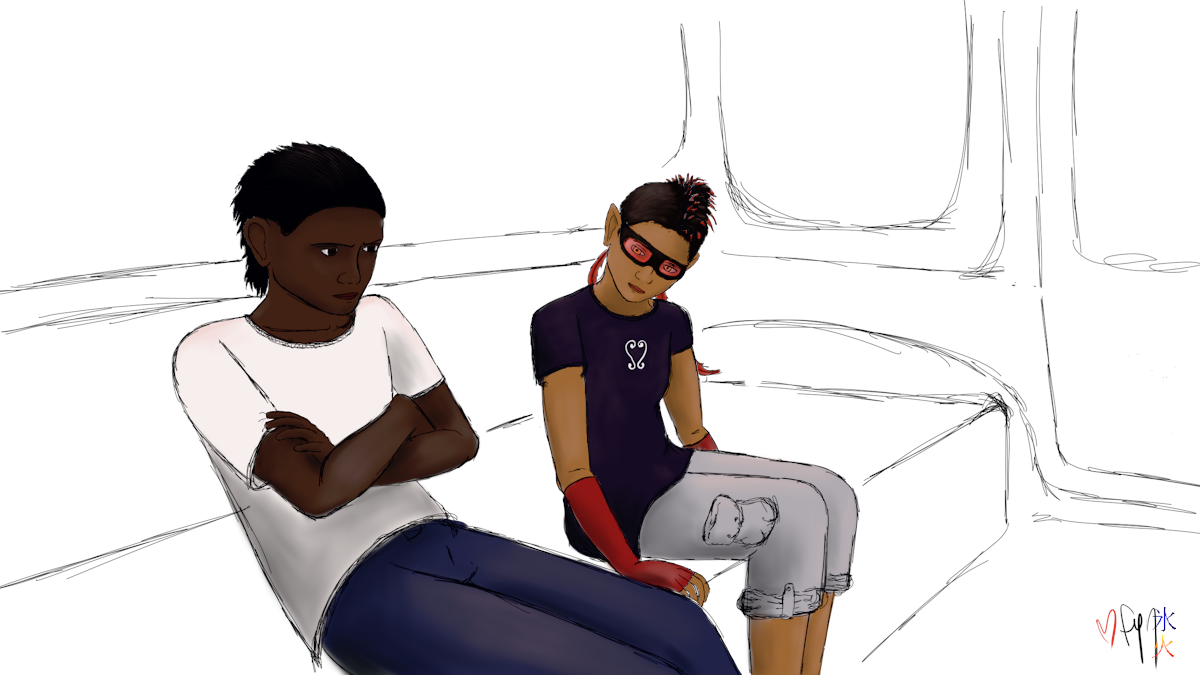 Unlike the silence of the pod, which was broken only by the pods own humming, Dakarai's head was full of tumultuous, confused thoughts.

They'd looked.  They'd kept looking.  They hadn't given up.

The last few days...or was it weeks? He wasn't sure.  Either way, it had been a seriously unpleasant blur.

He'd hurt Zara.  He glanced sideways at her, perched nervously on the comfortably worn seat beside him.  That had been the start of the downward spiral.  They'd been training, he couldn't understand the technique Juan was showing them.  Zara picked up everything so easily.  Frustration was normal, but then it had been intolerable.  He hadn't meant to hit her that hard.  Then Juan had confronted him about his stim usage.  Dakarai bristled slightly.  Juan wasn't his father, he didn't have any right to tell him what to do.

But he didn't give up.

He'd gone to Megan.  She was scared of him.  Megan was scared.  Of him.  The girl he loved more than life itself was scared of him.  Andrew wouldn't leave them alone, he'd been scared of what he could do to Megan.  Dakarai would never, ever hurt Megan.  Ever.  And yet he'd punched out Andrew over the insinuation.  One of the two best friends he'd ever had.  Megan had dumped him then.  He was mad at them.  But then again, he deserved it.  Dakarai inhaled deeply, exhaled slowly.

Juan had called.  And called.  And called.  And when he finally seemed to get that Dakarai wasn't going to answer, the texts had started coming.  Then they'd petered out, the last one simply requesting that he at least tell them he was all right.  By that stage the smokes and the pot and the junk food had chilled Dakarai out enough that he had been starting to miss them, so he had responded that he was alive.  It had taken a monumental effort to then ask if he could come home.  It had been an immense relief to get an affirmative response.

And then Zara had showed up.  She didn't know the friend he had been crashing with.  He didn't know how she could have tracked him down.

She'd told him everything.  How Juan had smashed through the bamboo grove in the backyard and then not treated himself afterwards after Dakarai had left.  How he'd gotten mad at her because she didn't want to condition too hard the following day as he had huge bruises and welts on his limbs, then apologised afterwards and explained as best he could that he felt like a failure as a parent because he didn't know how to cope with Dakarai's drug use, and had toyed with the idea of giving them up in the hope that they would be fostered by someone more "qualified" for the job, but in the end he was willing to do the best he could, and would fight for them if he had to.  She told him how Juan had gone out every night searching for him, how she had heard him venting his frustrations on the punching bags.  She had taken a couple of days to convince him to let her go and look instead.

She'd started at the obvious place, going to see their mutual girlfriend, then trawling the fight circuits starting with his manager (the bastard who had gotten him onto the stim to begin with...but he could have refused it...), and trawling networks before finally tracking him down to where he'd been crashing.

His own father hadn't searched that hard for him.  All his own father had to do was check in with Family Services and they would hand him the information he needed to find him.  His own father had, as far as Dakarai could tell, not only given him up for dead, he hadn't even bothered to see if there was a body to collect.  His adoptive family had searched relentlessly until they'd found him.  It was confusing.  It was humbling.  It was painful.  No wait that was the stim withdrawals.  He desperately needed a smoke.

"Dak?" Zara's voice stole timidly into his maelstrom of thoughts, offering a sactuary.  He latched onto it.  "You right?"

"Yeah."  He made himself look her in the eye, which he had been unable to do since she had rocked up on the doorstep.  The light was right in the pod so he could see her luminous eyes through the red lenses of her goggles, filled with concern and a touch of fear.  Her posture was nervous but not defensive.  She was not afraid of him.  Perhaps she was afraid for him.  Or of what could happen as a result of his stim usage.  The twins had said something to that effect before he'd left them.

He needed to apologise to Megan.  He might have muffed things too badly for her to forgive him, but it needed to be done, nevertheless.  He needed to sort out with Juan.  That would be soon.  He needed to do something about Zara.  He hated that she was so nervous around him.  It felt all kinds of wrong.  And he really, really needed to sort himself out and clean up.

"Zip," he said.  She murmured in response, tilting her head, the striking red head feathers floating behind.  The sight of them filled him with a deep loathing for what they represented.  The feeling was fleeting.  He had loved her for so long, he could overlook them.  He made himself loosen his posture, put one arm across the seat back.  "I'm really, really sorry.  Please...?" he left it hanging, not quite sure what he wanted to say.  She gazed at him for a moment, her expression unreadable, then she scooted to his side, resting her head on his shoulder.  He curled his arm around her shoulders, the shudder of revulsion at the touch of the feathers on his bare arm suppressed with practised ease, and rested his head on hers.  She forgave him, at least.  It would make it easier to get through whatever else had to happen.