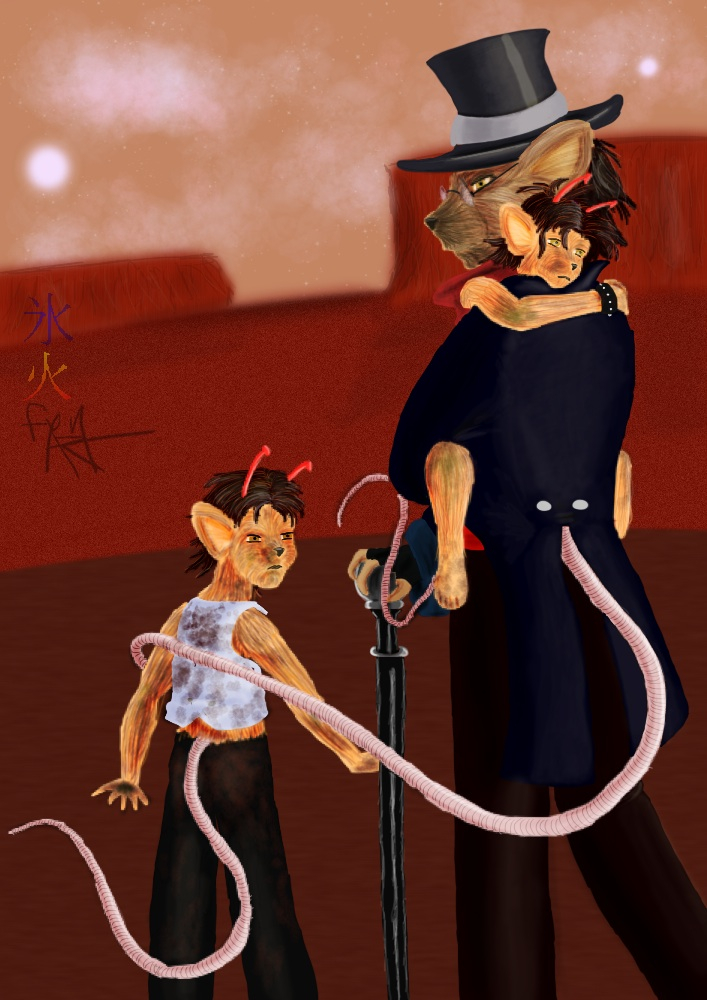 They'd wanted to play kickball with the other kids. It was the shady side of Red Rock, any sane, civilised being would...well...they probably wouldn't have been in the slummy ghetto area to begin with, never mind leaving their eight year old and three year old unsupervised with that...rabble. It was the way of the Tir tribes though to encourage independance as the child demonstrated ability to handle more maturity and responsibility, and Zenith trusted his kids. Starzone would probably not wander off, though she had been known to do so in the past, but Epoch was pretty good at keeping an eye on her even while preoccupied. And at any rate, Zenith would know if anything were to happen.

The kids playing kickball were not opposed to Epoch joining in, Starzone seemed happy where she settled playing with a pile of dirt, so Zenith went chasing the job.

It was always the rats, even when it wasn't their fault. The rat kids had come along and wanted to join in the game, as children are wont to do, as his own children had done not that long ago. Perhaps if they'd grown up in Red Rock, perhaps if they hadn't resisted every attemt to assimilate or annihilate them with force greater than or equal to what was thrown at them by the other mice, if they'd lived the life sanctioned and approved by society at large, Epoch and Starzone would have grown up hating the rats without ever really knowing why. As it was, that was not the way of the Tir.

Zenith had just secured the job when he sensed trouble. Still, he had sauntered out with his usual casual air and a pocket full of advanced payment in cold hard cash, so the fight was well underway by the time he got out there. There was Epoch, angrily rolling in the ground with two of the boys that he'd been playing with when he left them. There was Starzone, standing by, glancing toward the fight with child soldier alertness but otherwise tentatively patting at the cut knee of a sobbing little rat girl not a whole lot older than herself. Zenith shifted his grip on his cane and stood by to see how they did. He could see evidence of Darkmoon's training in Epoch's still slightly clumsy movements, but it was obvious that he was more adept at brawling than the other boys. Obvious enough that a third joined in. Then two of them had Epoch's arms and the third was slugging him in the stomach.

There went Starzone, flying onto the back of the one doing the punching, claws digging in, and she bit down into his ear, drawing blood. Moving a little closer, Zenith couldn't help but smile. He drew a breath to call his children to heel, when the adults got involved. First it was pulling the kids apart. Then it was macho manly men getting in each other's faces. Rodents all, mouse and rat, the only difference in size and physique, the blood and physiology the same, yet separated by delusions preached by people claiming to be educated. One of them had grabbed Epoch roughly by the arm, shaken him a little. Nobody touched his kids.

Then it had been all on. Zenith was, as the rest of the mob found out the hard way, pretty handy with his cane. He didn't just carry the thing for looks. It was a bit of a relic, a solid, well balanced hardwood and metal contraption that he handled like a sword. Then there had been the small matter of the gun, out of his strike range, aimed at his head, and Starzone freaking out and sending the holder of said gun a nice big fat fireball. Fortunately, the holder of the gun escaped with a third degree burn to the gun arm and his life, mostly due to Zenith distracting Starzone by snatching her up.

Faced with a frighteningly competant swordsman that a fair few of the crowd now also recognised as commander of one of the mercenary Tir tribes, along with the explosive proof of the existance of kinetics, so rare they were often relegated to flights of fancy or exaggerations, most were not so inclined to violence. The mice muttered disparaging remarks just out of earshot as Zenith guided the kids back to where he'd left his bike, ever alert for danger, but you could tell by their tone what the intent was. A couple of rats were not exactly grateful for their interference either, damn mice always meddling, or something. Zenith chose to notice only the mother of the little girl rat Starzone had been helping, who flashed him a quick, nervous, grateful smile.

Their life was hard, but if the cityfolk were anything to go by, Zenith was fiercely proud to be bringing his kids up the way he was.

Yes, my characters. They first made an appearance about 15 years ago, give or take. Yeesh. If I had the time and the inclination to pick up that fic again so many things would be different and much better developed. They're not dead though, they've been rehashed into my AEfter Ragnarok project :)

And the story? Straight off the top of my head. But it might have happened

This work by bek (ryivhnn) is licensed under a Creative Commons Attribution-NonCommercial 4.0 International License.