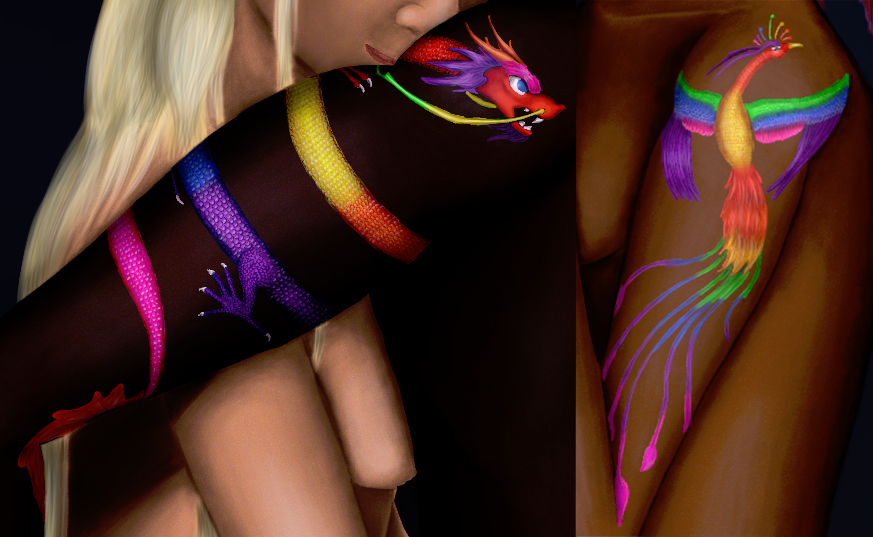 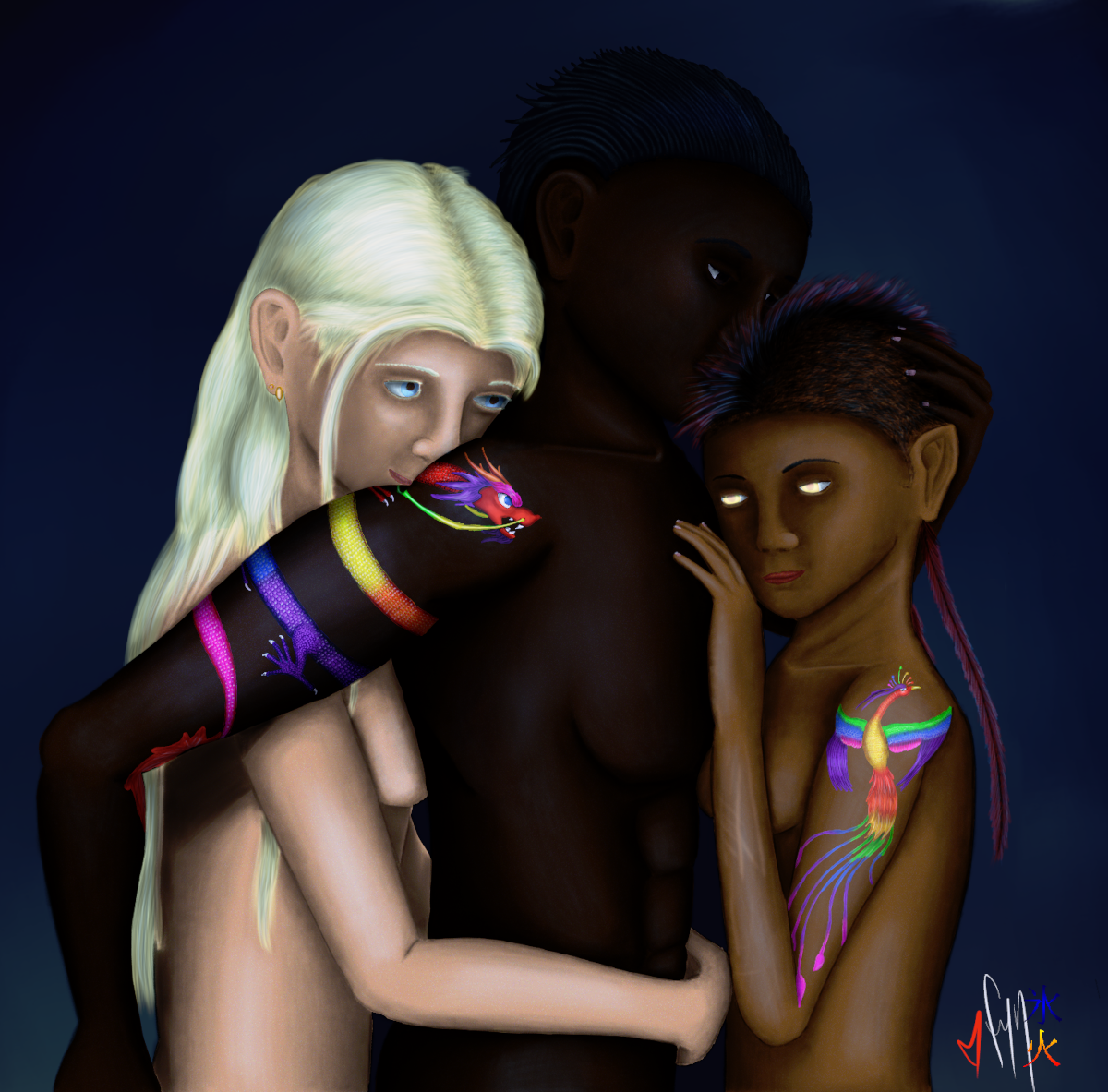 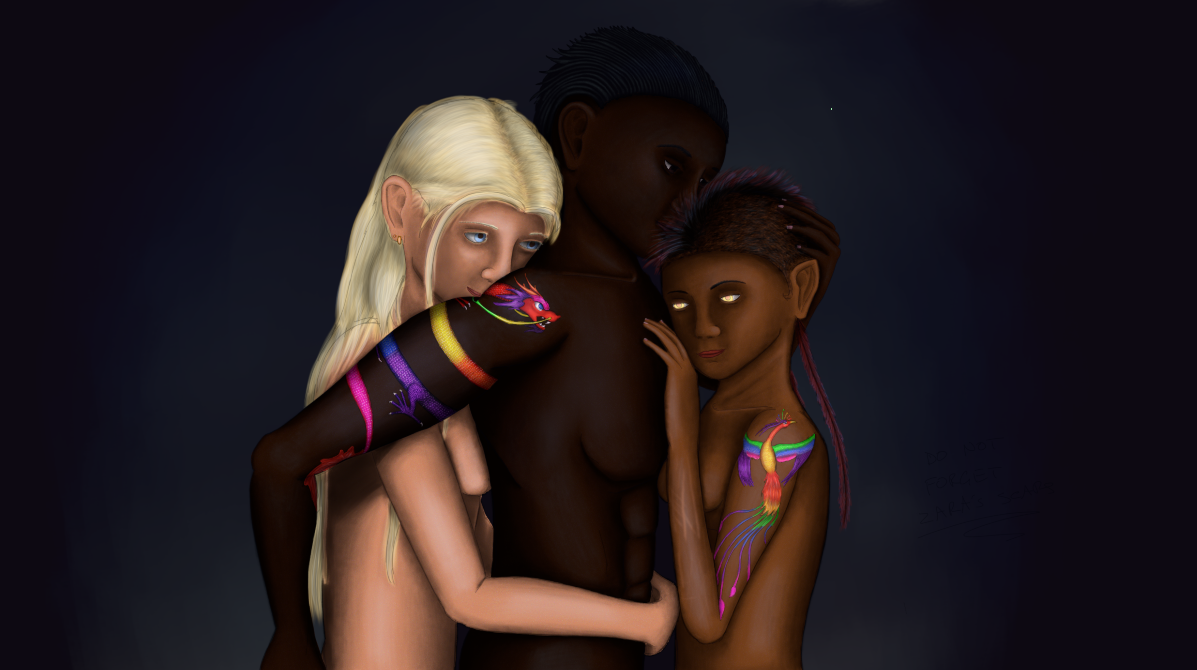 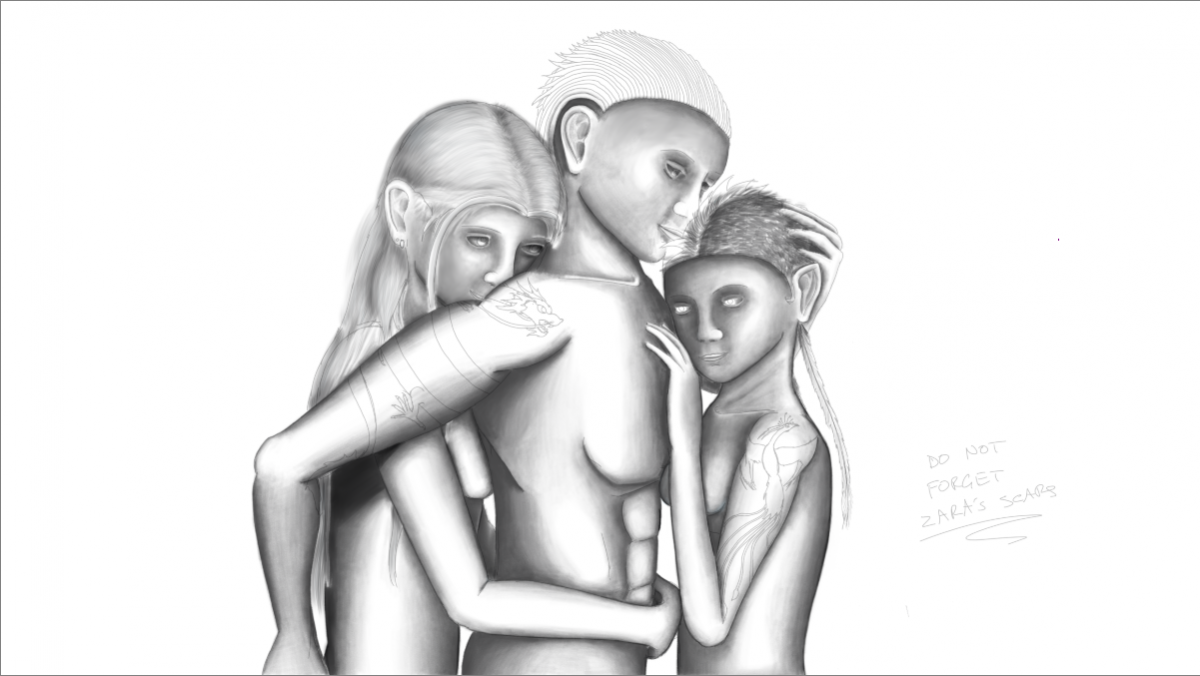 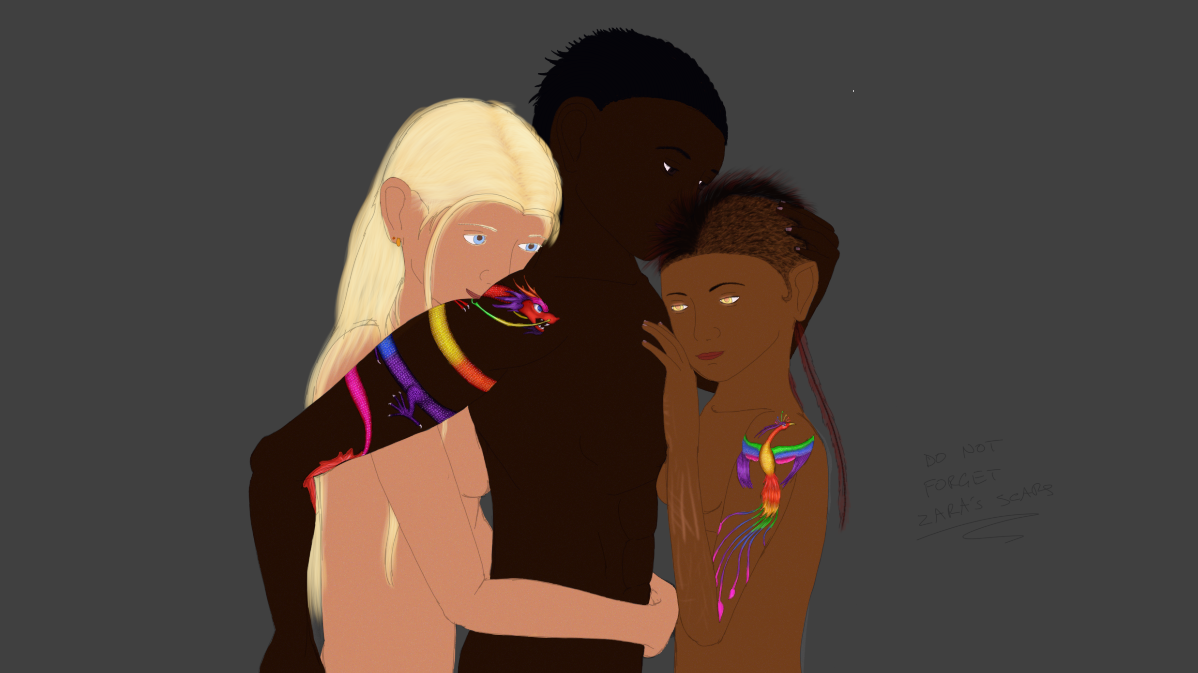 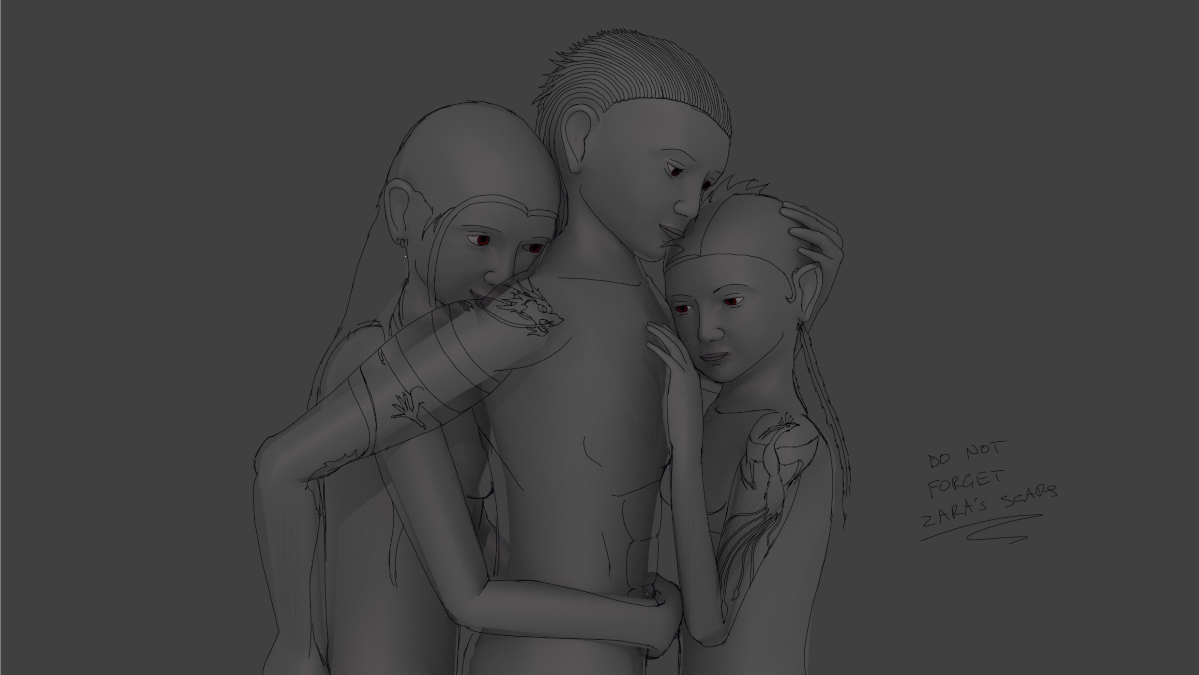 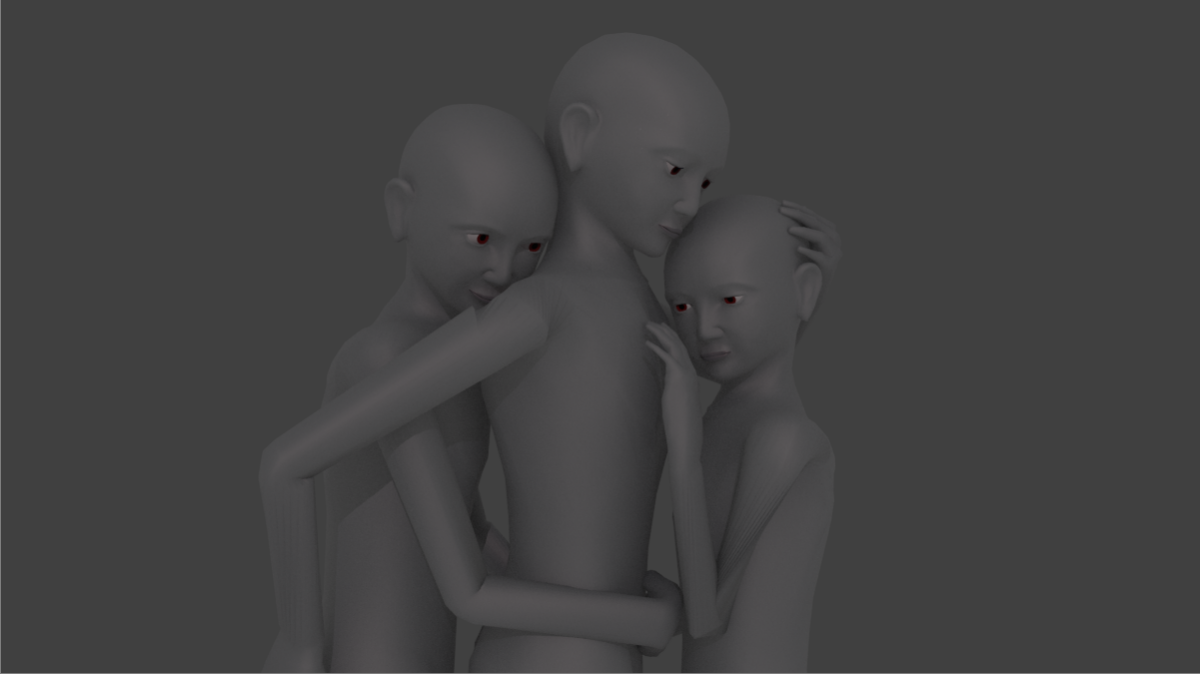 This has been the better part of a week in the making.  Almost full days because I stupidly thought that I would get it done next session.  I now have headache-caused-by-terrible-posture and my neck is violently out again.  Pro-tip: do not spend hours a day hunched over a tablet.  And while I'm not completely happy with it I'm happy enough to post it.  And obviously I need a hell of a lot more practice with dark scenes.

There is a story behind this one, but not one that I normally try to write to accompany pieces.

Once upon a time, not so very long ago, I streamed a sketch which was supposed to be a quickie before I got back into 3d.  It didn't pan out that way because things rarely do when I'm doing them.  However due to odd touchiness/drivers/something on my linux box, the drawing streaked (it will sometimes decide that I've drawn a line when I have done so such thing) and I didn't notice til it was much too late.  The line went across a fair chunk of the page and it was going to be a lot of work to remove, as I sometimes do colour and shading on the same layer for sketches (depending on what brush I use, if I'm using wet bristles it's always on the same layer, mix brush usually on different layers though this one wasn't).  Annoyed, I abandoned the sketch.

Some time later (ie in very recent history) I decided that I really should do a decent drawing of Juan, Dak and Zara's tattoos (and possibly a drawing at all of Juan XD).  Which somehow in my...er..."brilliant" mind also became the perfect opportunity to both revisit Who Says Three's a Crowd and show Zara without the ever present goggle sunnies and arm socks.

Which of course meant it had to be dark enough for her to leave them off.

The tattoos took most of a day each and after I was well into the first shadow layer I was wondering what the hell I was doing, especially as I had to turn off the colour layers to see what I was doing on Dak due to the dark skin.  Last night my hand was hurting and I decided I'd had enough and was done.  Then my sister pointed out some stuff that I'd missed so I attempted to fix it for another half hour before deciding I was definitely done and everything else was going to be "stuff to remember for future anything if I ever draw again".

And the name? Well I was just going to call it "Who Says Three's a Crowd?" again like the first incarnation.  Or perhaps something deep and philosophical like "Enough Love for All".  After doing the flats I told my sister that I was tempted to give in to my immaturity and call it "Neopolitan".  She dared me to do it.  And so that's what we've ended up with.

On the bright side I got practice in and picked up some new tricks.