My stances are better than yours Zul'jinn had seen the water fight starting as he'd been swimming in from his wingboarding lesson with Mu'tai, and it was in full swing by the time he got to his chosen vantage point, comfortably chest deep in the pleasantly cool turquoise water.  Anyone could be easily forgiven for thinking there was a severe mismatch going on between the combatants; comprising of the whiplike Avian Saun'de with the pocket rocket half-Avian Zara perched easily on his shoulders, versus the intimidating bulk of the Dragonkin Kae'lin with the buff Damian precariously and awkwardly balanced atop his.

Zul'jinn didn't know the company he was keeping that well, but he guessed there was much less of a mismatch than it looked.  Kae'lin and Saun'de were grappling, their legs and Kae'lin's lashing tail violently churning and clouding the immediately surrounding water.  Saun'de was never going to win a straight strength contest.  Up above, Zara and Damian were engaged in a much more complicated duel, their arms snaking in and out of wrist and arm locks, with Damian laughing and protesting about how much more difficult this was with wet and slippery skin.

Then Kae'lin got a good grip and simply picked up Saun'de, dropping him onto his back into the water.  And that should have been that.

In a feat of acrobatics that bordered on anime level physics, Zara sprang off Saun'de's shoulders and onto Kae'lin, grabbing onto his horn for stability, before bodyslamming into Damian.

On the ground, Zara bodyslamming anyone would have been amusing at best.  Damian however was completely not stable where he was and the two of them tumbled off Kae'lin's shoulders, Damian emitting a startled squawk, and crashing into the water below.  They were both back on their feet in the time it took for Zul'jinn to advance a couple of steps and for Kae'lin and Saun'de to voice their concern, not quite hidden behind their raucous laughter, and their duel intensified as they introduced various other kicks, punches and locks from their extensive repertoires.

Once more it looked like it was going to be all over when Damian spun Zara into a submission pin, until she spun out of it, hooked his leg and pulled back into the crane stance she loved showing off in, easily unbalancing him with a shove and sending him flat on his back again.  Damian sat up, rubbing he water off his face and out of his eyes and looking up to find Zara smugly maintaining the last position she'd ended up in.

"What the fuck was that?" he laughed, gesticulating wildly in the air.

A wave bobbed through and Zara dropped back into looking like a normal person.  "It's called: my stances are better than yours," Zara returned, extending a hand down to Damian.  He grabbed hold of it, playfully staying in place while she completely failed at helping him back to his feet before he let her haul him up.

"I'd call it a draw," Zul'jinn offered, completing his approach to join them.

Kae'lin verbally agreed with him with a chuckle, and they relaxed into idle chatter, bobbing in the gentle waves and watching Mu'tai carving the larger ones further out.

Storytelling muscles are a bit rusty and I've been headachey again lately.  Hopefully not coming down with something but haven't really been doing myself any favours with the late nights x_x I should really read a lot more than I have been, but my excuse is I'm currently reading Herodotus and that requires more concentration than I have sometimes.  3d is much easier.

I'm guessing I needed some water practice because I've...never done it.  So obviously I need a hell of a lot more practice but I now have a vague idea of what I'm doing as opposed to none whatsoever.

I also really wanted this to be a straight shot but this way was a bit more interesting.  And something has gone screwy with something or other, as while I can pose the models with no problems, when I render part of the mesh is being rendered as though it has no weight maps which is making using my base models "interesting".  So I guess I better hurry the hell up with the 3d models.  Anyway even with the base models being screwy it was quicker using them that trying to draw from scratch: 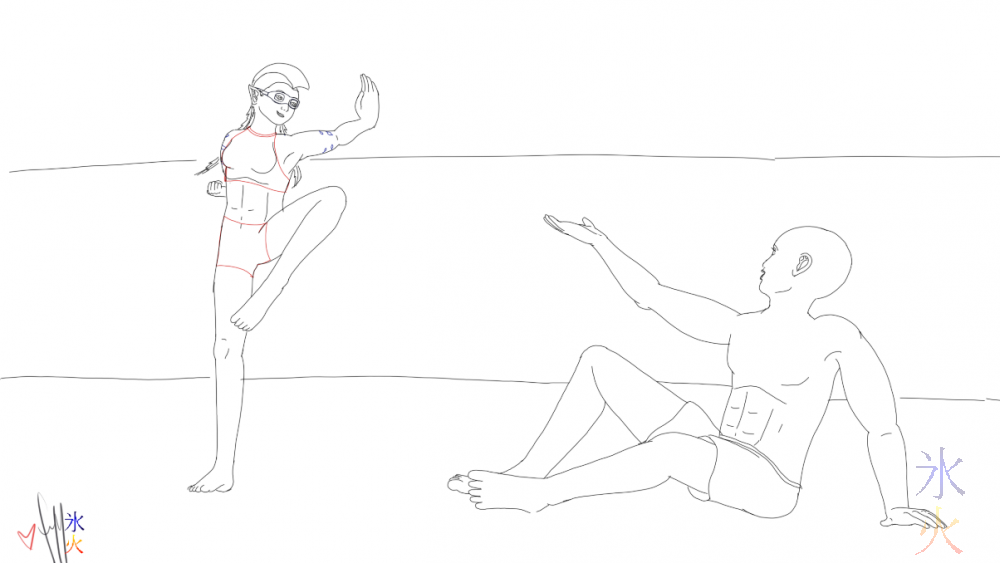 First light and shadow layers set on overlay.  I actually do the palette layer progressively when deciding on the light and shadow colours so what you're seeing is what happened after I'd done the thid layers.  And trying to make sea foam look at least vaguely like it might be foam. Then light and shadow 2 also in overlay mode: And light and shadow 3.  Shadow 3 is set to multiply and light 3 to screen. Gave the water its own light and shadow layer (more screen and multiply) but after throwing brush strokes around at random like I knew what I was doing I eventually conceded. And finally a blue overlay because sky radiosity or something.  And the signature which apparently I can't do properly these days either, but I'm just going to blame the cold for that.  Yes.  The cold.  Good thing I don't live somewhere that's actually cold.