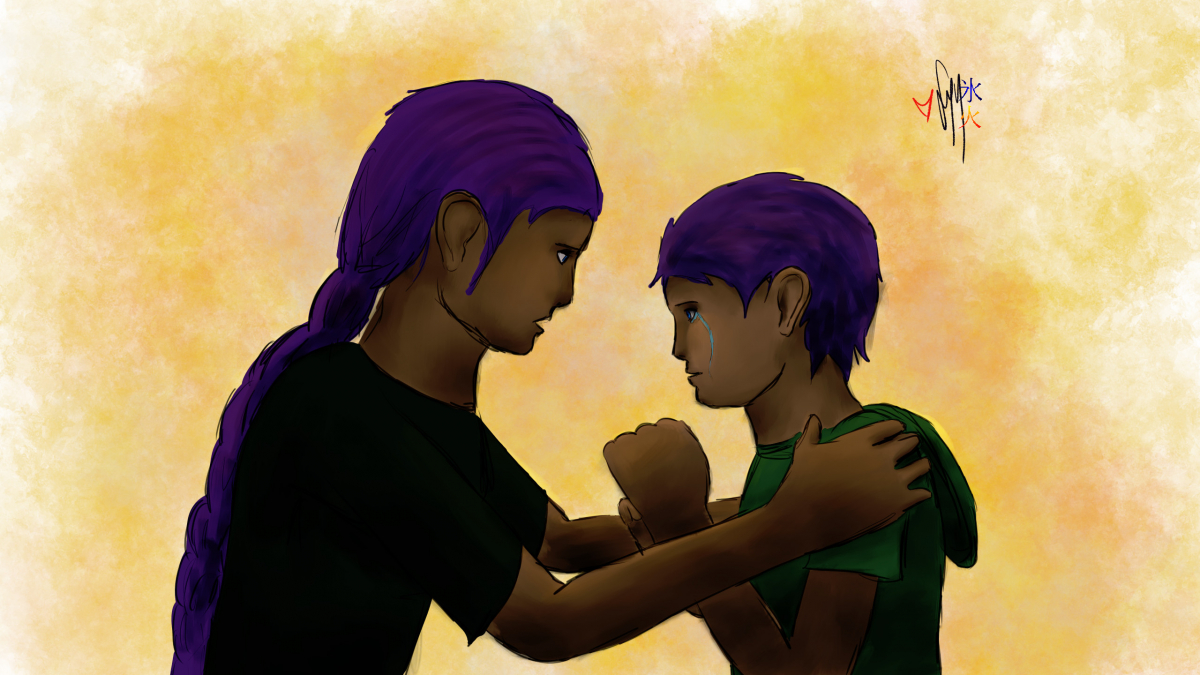 His skin stung and his ears echoed with a painful, high pitched noise that was taking its sweet time subsiding.

Why? Why had he used self destruct?

He didn't want to look, but he had to know.  Carefully, he opened his eyes.

Blackness.  His already rapidly beating heart attempted evacuation out of his mouth.  Was he blind? Had he not shielded his face in time? Pinpricks of light seared his eyeballs, and thankfully the blackness lifted, revealing the impact crater the force of the explosion had left on the battlefield.  Song's sore eyes darted around his side of the field.

"Scruffy!" Relief escaped him in the name as his badly damaged umbreon staggered up, paws splayed out wide.  Earlier in the battle it had been in defiance, head down as a show of aggression.  Now he was barely able to stand, and his head was down because lifting it was too much effort.

They had won the round, but at what cost?

He heard Lyric calling his name from somewhere on the other side of the planet.

The pokemon who had been with him since even before he had officially become a trainer.

"Scruffy, come back!" The umbreon disintegrated back into the relative safety of the pokeball.  Song clutched it protectively.  He felt like his entire body was shaking and he couldn't stop it.  The next flash that blinded him was internal, as unwanted memories of his skamory melting before his very eyes dredged up from the depths of his brain.

"Lyric," he whimpered, and turned desperately to find his big sister.  She was at his back, like she always was.  He didn't realise how violently the world had been swaying until she grabbed him by the shoulders, steadying everything.

Why did he do that? Behind him he could hear Surge talking.  Lyric angrily snapped "Time out!" over his head.  Surge had pissed her off.  If only she would battle, she would wipe the floor with all of them.  She would show them.

"Song!" She was demanding his attention again.  Didn't she see what had happened? "Look here.  Breathe."  He would much rather look at her than face the memories of his mutilated skamory, and the realisation that his umbreon had almost died.  He was a pokemon trainer, death was an occupational hazard! If you didn't want to risk that you shouldn't be a trainer! Maybe the Viridian vegans were right.  Maybe this was all wrong.  He followed Lyric's breathing, slowing his hyperventilation down, getting it back under control.  His previously numbed limbs started tingling unpleasantly.  At least he was still in one piece, and most definitely alive.

Lyric arched an eyebrow, her eyes puzzled.  "This isn't the first close shave you've had."

He clenched his fists, but it failed to control the trembling.  He felt light headed, like his bones weren't actually there and that if Lyric let go he would melt into a puddle on the ground.  "I know...I always thought...I knew maybe something bad might happen...but I thought if I was careful, and I'd rather lose than lose them...but then Quicksilver..."

He shut up when she shushed him, struggling to follow her breathing again as tears and a small sob breached the pitiful amount of control he was barely maintaining.  In the background, he registered Surge asking him if he was quitting, amidst the jeers and taunts of the cadets that surrounded them.  Lyric shot a contemptuous glare in Surge's general direction before looking down at him again.

"You don't have to continue."  Her voice was gentle.  She got it.  She didn't care about ego or pride, she would rather lose than see her pokemon badly hurt.  Somehow, she rarely lost.  If it had been her battling, that electrode would have lived to see another day as it would have been knocked out before it could have used a move that was normally reserved to generate energy for reproductive purposes.

He killed his own pokemon.  Why?

"Those fucking moves should be illegal.  Sac'ing that electrode was a fucking dick move.  I think it was desperate, though."

"He's worried you're gonna beat him."

What stupid league battle was worth a life?

"Look, it's totally up to you whether you continue or not.  I'm right here whatever you choose, you know that."

"Make your decision here," she moved her right hand from his shoulder to his chest above his heart, "carry it through here."  Her hand shifted up to his head.  He closed his eyes, the gentle pressure of her palm seeming to clear his thoughts.

"Ash, Frost?" The marowak and the glaceon stepped up, looking as determined as he felt.  Boosted by their confidence even after they had watched their team mates battered, Song smiled grimly, a plan formulating in his mind.  There would be at least one more electric or dual electric type, because they were in an electric gym.  One was probably not, just to prevent complete rollovers.  He would need to use Ash for whatever electric types remained and Frost for the non-electric backup.

"Let's do this."  Song turned and strode back to his side of the battlefield, Ash and Frost flanking him.

Sorry about quick messy sketchy, hope the accompanying ficlet kinda makes up for it? XD I really just needed to draw something, and while mindlessly flicking through an outline for a pokemon fan comic series I wrote a couple of years ago, this scene jumped out.  Possibly because I'm feeling majorly stressed at the moment myself.  12yo is trying out high school this year (she just wants to see what it's like so I've put her in for a term, so far she's having a blast) and the logistics of having two out and one in is destroying me.  I may have to cut my steem time more to make up for the 5 hours of art time I've lost with stupid school pickup :S