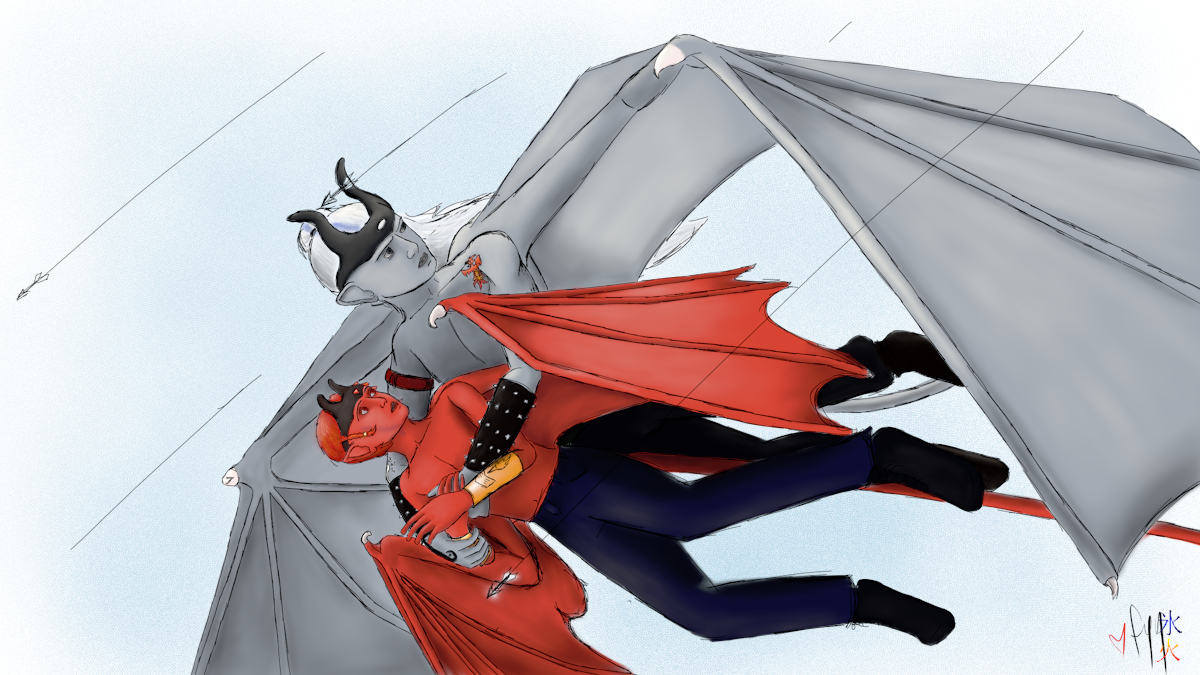 The young High Prince fled the conference room, the nightmarish chaos fading behind him, only to be replaced by pursuing wing beats.  Tears blurred his vision.  Zul'jinn normally loved flying through the open areas but now they were too open, there was nowhere to hide.  Behind him he could just hear the sounds of crossbows arming up.  How could this happen? I don't want to die! He was barely aware of the nearby mewling sound, not really registering the fact that he was the source of it.

Displaced air cracked like thunder way too close, the resulting shockwave throwing him off balance.  Zul'jinn yelped involuntarily, tried to correct, then gasped as a large hand grasped his arm and yanked him forcefully sideways, the other arm wrapping around his torso and pinning his wings but otherwise softening what would have been a painful jolt.  Temporarily robbed of the ability to fly under his own power, Zul'jinn automatically grabbed the closest stable thing which happened to be the arm around him, the studs on the bracer at least denoting a Royal Guard.  A quick glance down revealed a tattoo he would know anywhere, and the initial panic at having his wings pinned was overriden by the immense relief at being picked up by his bodyguard, and not a moment too soon.

Behind them numerous crossbows thwacked and the darts rained around them, most thankfully missing seeing as they'd changed direction so suddenly.  Zul'jinn glanced upwards at Tsa'run, who was turning to sight their pursuers.  There was an ominous singing followed by a sickening crack.  Tsa'run grunted, sounding slightly startled, his head snapping back as though hit by something hard, and they changed direction again with a stomach-churning jolt.

And then they were falling.

Tsa'run's grip tightened uncomfortably around Zul'jinn and they descended in a random zigzag pattern, way too fast, towards one of the wall walkways.

They were going to crash.

Zul'jinn clung to Tsa'run's arms, terrified but trusting in his bodyguard.  They careened into the walkway and Tsa'run first snapped his wings out, violently washing off a lot of speed.  Not enough.  He half-furled his wings and rolled, putting himself at the bottom.

They hit the ground hard.

In the original Crossbow Hailstorms, Zul'jinn was tiny (somewhere between 5 and 7).  I used to be a total pantser, but was forced to change tack as all of my characters have interconnecting stories which meant I needed to know what was going on and when all the time (even if the audience doesn't).  And basically the ages I had going were only going to work if it was an anime where age doesn't seem to matter.  But it kind of matters for my purposes XD So in this one Tsa'run is actually around the same age as he was in the original sketches but at a much less Mary Sue ranking, and Zul'jinn is 11.

I have an idea where the notebook containing the original Crossbow Hailstorm is (and it will be kill me now kinda terrible as it was in a notebook which meant I would have scribbled it out while in a lecture at uni or otherwise supposed to be taking notes...well over a decade ago...:S) but finding it requires a little more rearranging than I currently feel like doing.  2 was in a recent sketchbook that lives on my desk so that's up for Patreons to laugh at.