Buy me a drink first 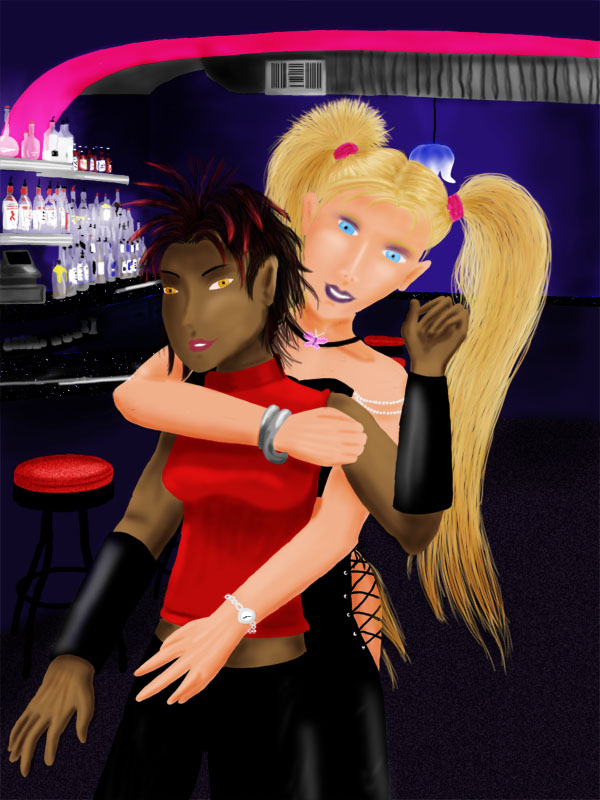 Zul'jinn jolted internally as Megan seemed to materialise out of the crowd beside them, catching hold of Zara and pulling her close with a playful growl as she attempted to nip the smaller girl's shoulder. Zara for her part looked completely unsurprised, casually fending off the double grope by catching Megan's wrists, leaning back against the heart stoppingly beautiful blonde.

"Hey Megs," she said, her voice coloured with amusement, before spinning out of Megan's arms and turning to face her. Megan followed up, grabbing Zara's hips and pulling her close again, this time planting a kiss on the lips.

Zul'jinn was quite happy to sit back and appreciate the view, along with every other guy within line of sight in the club, it seemed. It amused him to think for all her talent in a fight, Zara didn't seem to maneuver quite so well in the flirting game. But then again she didn't want to hurt Megan. That and it didn't exactly look like she was violently opposed to anything Megan was doing.

Zara eventually pulled back from Megan, who held her in the hug.

"Do I get to take you home after?" she inquired innocently, raising one hand to touch the tip of Zara's nose.

Zara returned the smile, with her own cheeky expression. "Maybe."

Yes, I'm aware I can't draw. Yes, I know what's wrong with it. I'm trying to remind myself it's a concept piece, as I really need to get on with the 3d and seriously do not have time to rework it or scrap it and start over which is what I wanted to do :P

Anyway, concept piece from an animation I'm doing, called AEfter Ragnarok. Fortunately I will be sparing you my horrendous lack of drawing skills as it will be done in 3d and my 3d is a bit better than my drawing.

Here's the original concept done years ago. That one was conjecture, this one is part of the actual scene.

And here's the background reference.